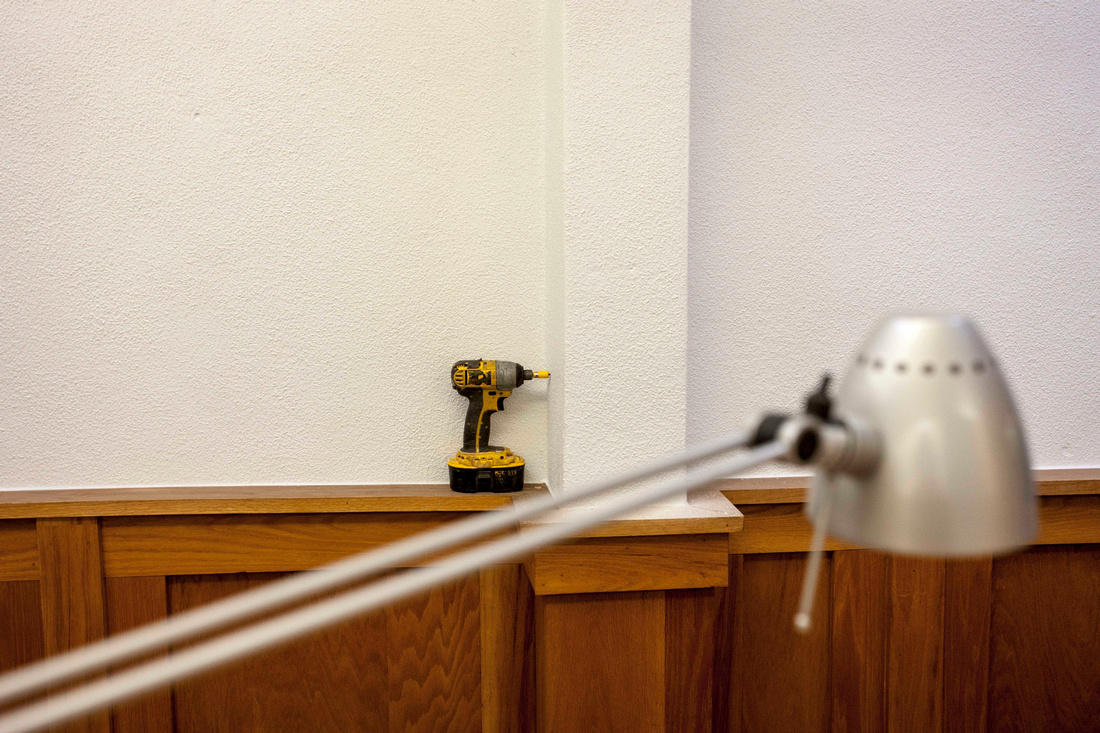 As the sewer saga continues, the pipes connecting from the east were full of dirt, so they were most likely old floor drains. After the plumbers cut and pulled out the old cast iron pipe, we flushed the upstairs toilet a few times, and dirt came out with the water, which meant the cast iron pipe that runs under the furnace room and workroom are rusting out. Instead of sawing up the floor and tunneling under the furnace room and walls in the work room, the plumber suggested rerouting the drain pipe along the ceiling and bring it down in the library close to the new double clean we had installed two weeks ago. The plumbers got the pipes hung and ready to connect next week. 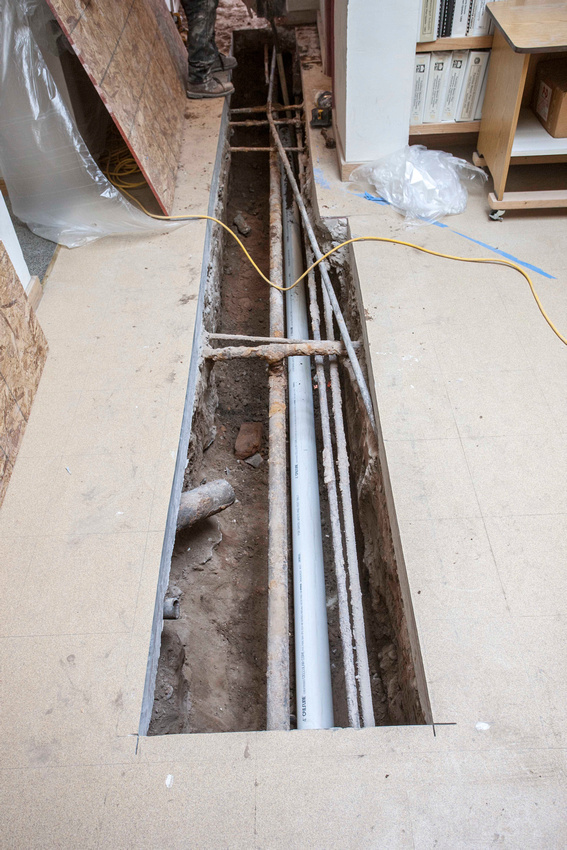 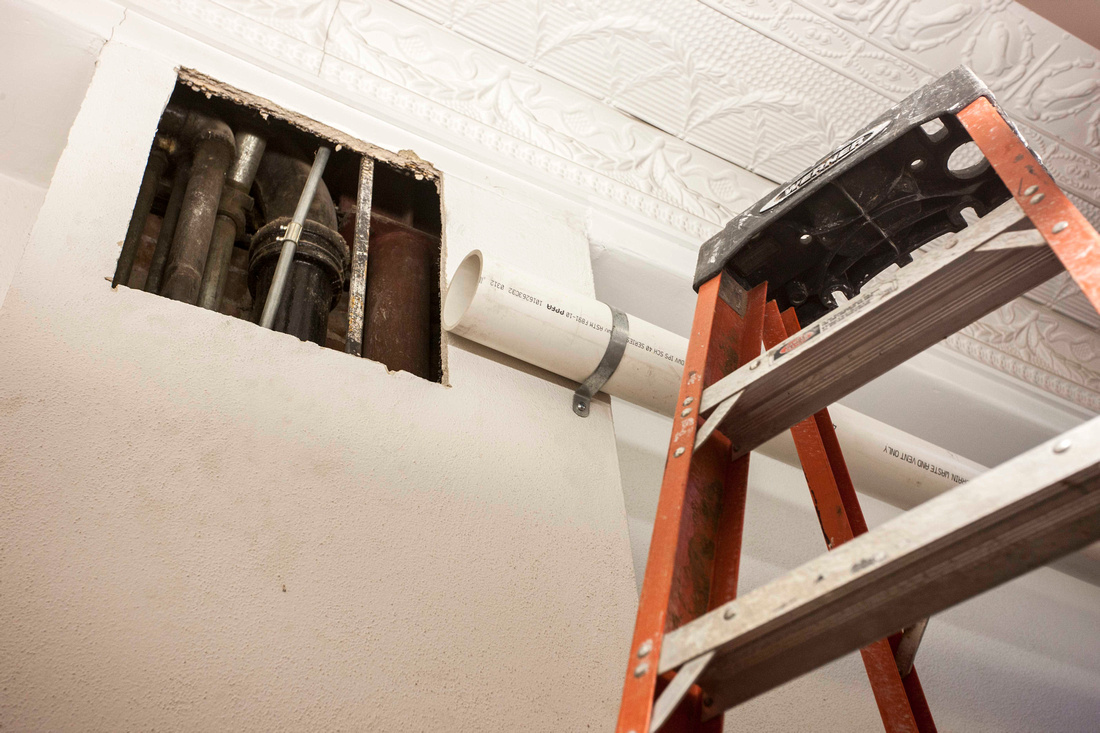 The plumber will cut the black pipe behind the electrical conduit and rebar to make a connection to the new 4" PVC. I don't envy the poor guy. That is going to be a difficult cut and connection to make. He carefully explained to me how he is going to do it in Spanish and English to make sure I understood how difficult to task is. I told him I really appreciated the fact that he was doing it and not me. 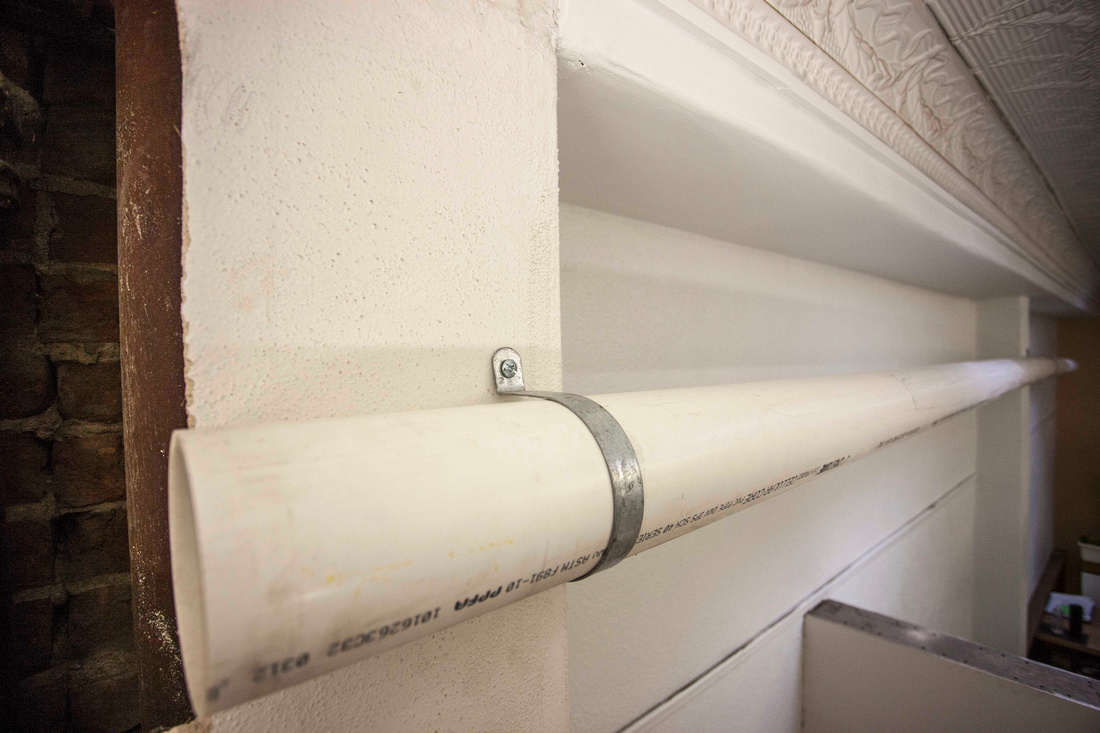 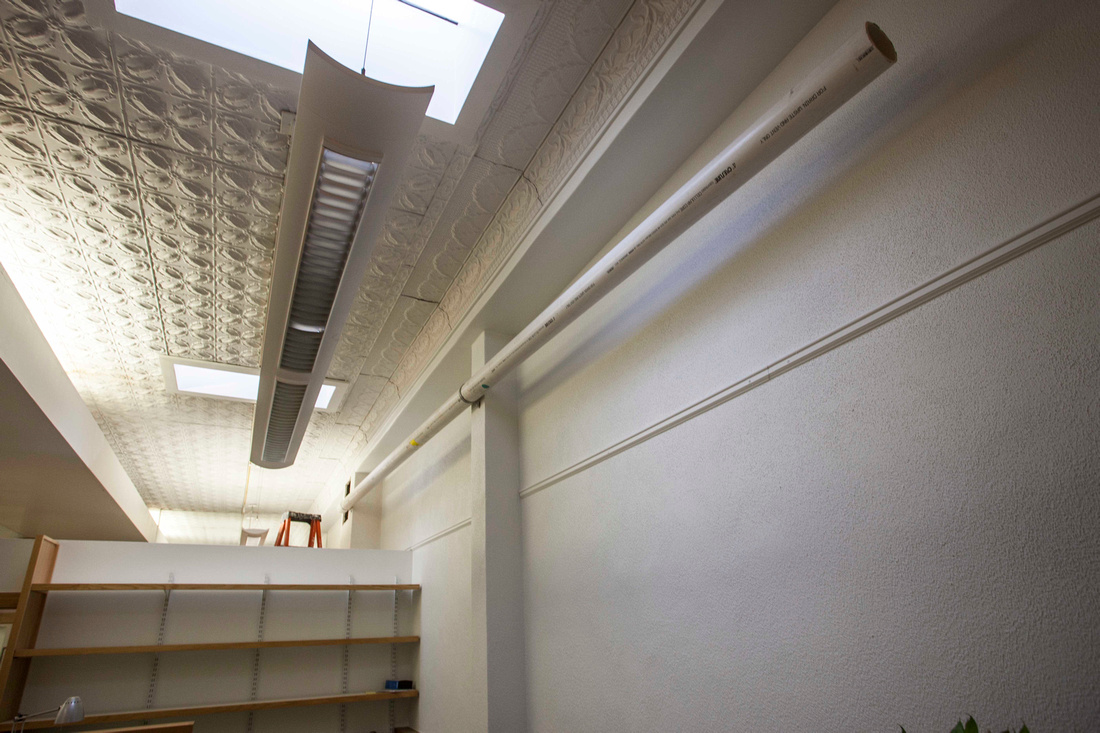 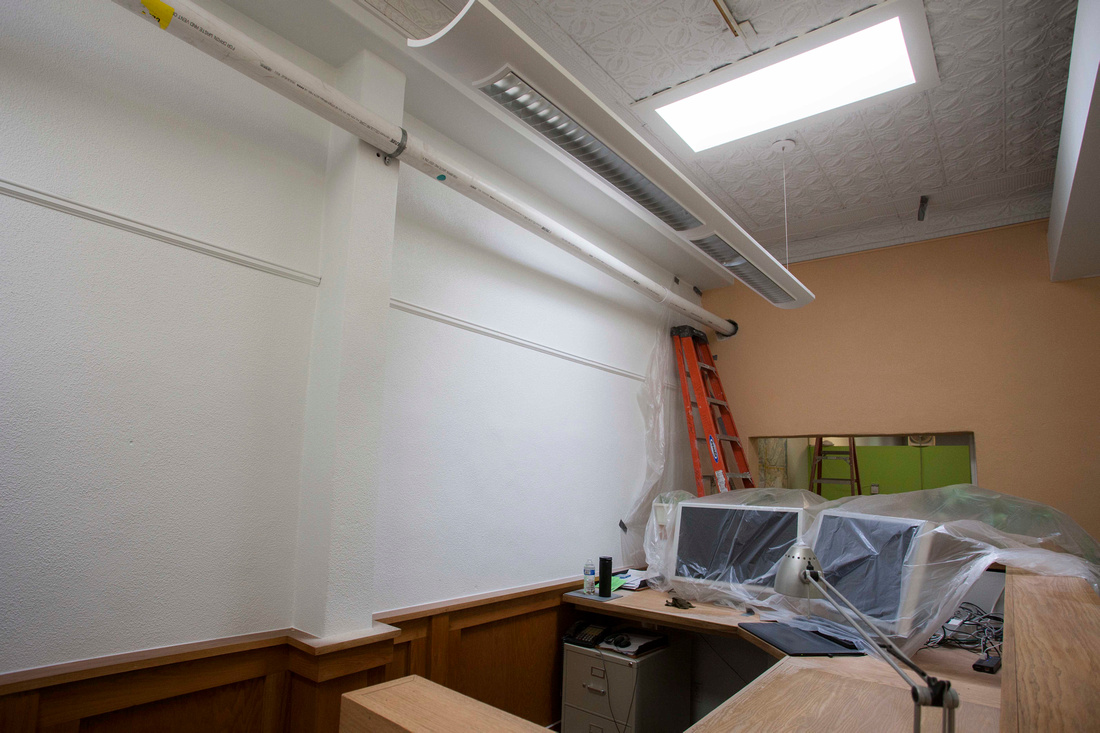 The back walls is 12" solid concrete. The plumber went through several big concrete bits making the hole in the wall. 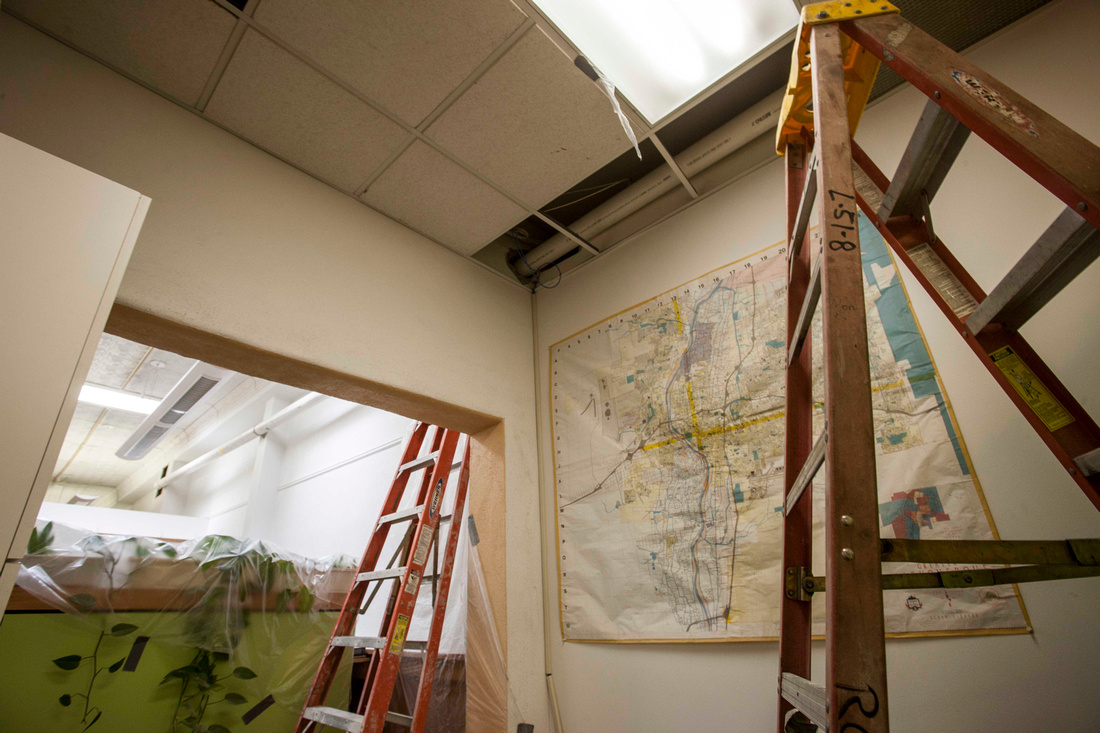 The pipe runs through the wall in to the ceiling above our IT area, takes a turn over one of the workstations and runs under some ductwork and then comes out from the drop ceiling and down the wall where I had a book shelf. We printed the map of Albuquerque and pinned it to the wall 20 years ago. One of the plumbers asked me what the bright yellow divisions are. I explained the divisions are where we taped that four sections of the map together, and while the rest of the map's sections faded, the color under the tape didn't fade. 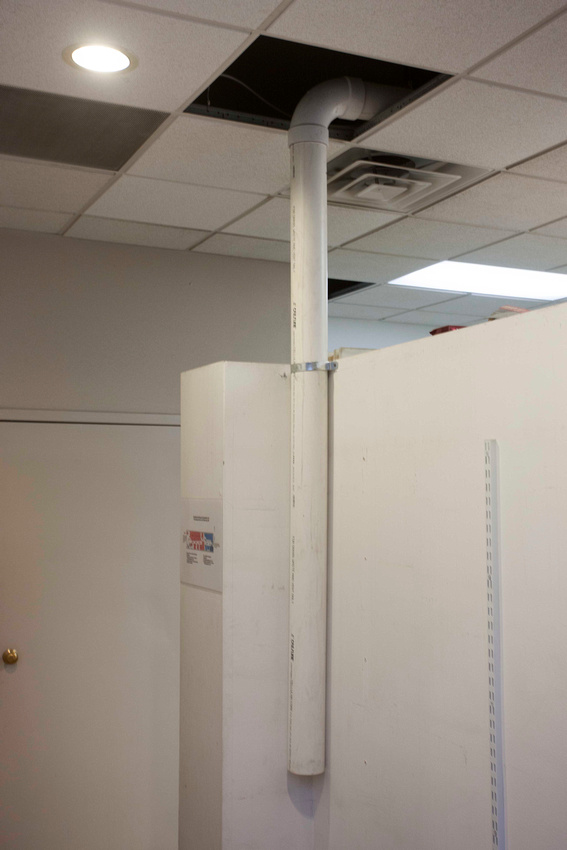 The pipe dropping out of the ceiling, down the wall. 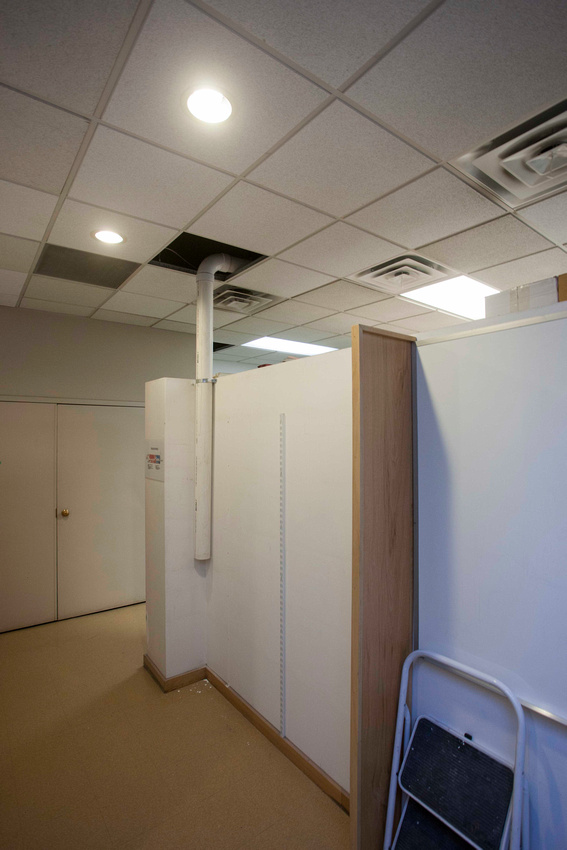 The plumbers will make a diagonal cut in the floor from the new clean out to the corner of the wall where the drain pipes will be connected to the clean out.

T & L Photos
Thanks, Julie!
Julie(non-registered)
Oh boy that is some job .. I hope Harry is wrong. Fingers crossed you nail it Tim
T & L Photos
Hi Patti! I told Jay that the sound os gurgling, running water was supposed to be therapeutic (people pay to by soundtracks of running water to help them relax). We will have the pipes enclosed after they are all connected and that should kill the should kill the sound of water running through the pipes.
T & L Photos
Thanks, Couriers!
T & L Photos
Thanks, Harry! This will end a major portion of it.
No comments posted.
Loading...
Subscribe
RSS
Recent Posts
Last Post on Zenfolio Walk, Run, Splash, Fly A Walk in the Snow We Wish You a Merry Catmas Cranes, Train & A Full Moon on Winter Solstice I Had A Dream Shrink Wrapped Fly Away Fire & Phantasm First Snow on the 2nd
Archive
January February March April May June July August September October November December
Timothy Price
Powered by ZENFOLIO User Agreement
Cancel
Continue