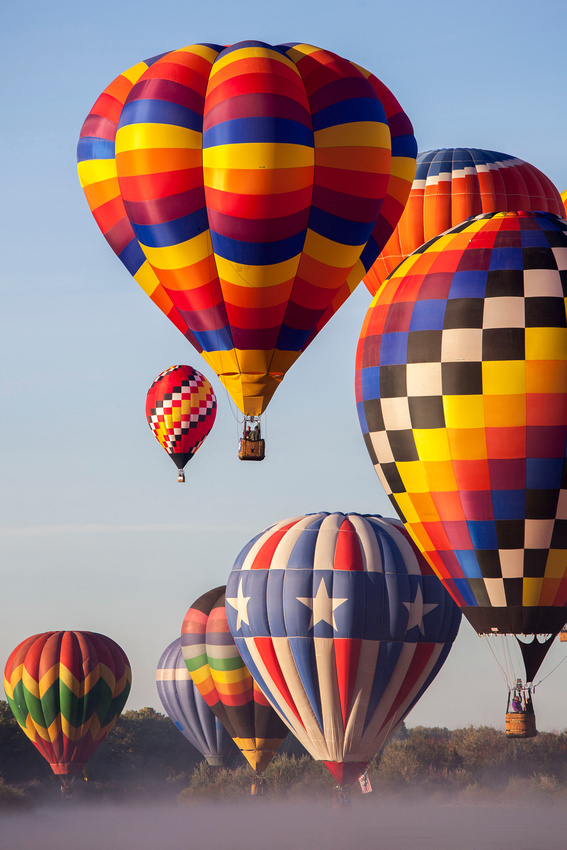 I was at the river just as the sun was rising over the mountains. The banks were too overgrown to see the balloons that were already in the water south of where I was standing, so I waded out into the middle of the Rio Grande in knee deep water where I got a much better view. 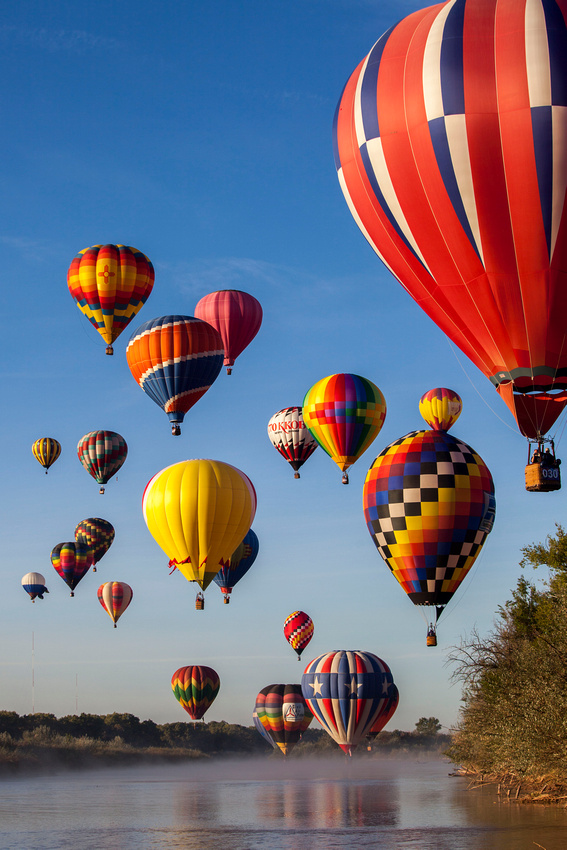 It was the last day of the day of the Albuquerque International Balloon Fiesta, a lot of balloonist had already left, so there were not as many balloons up as in previous days. 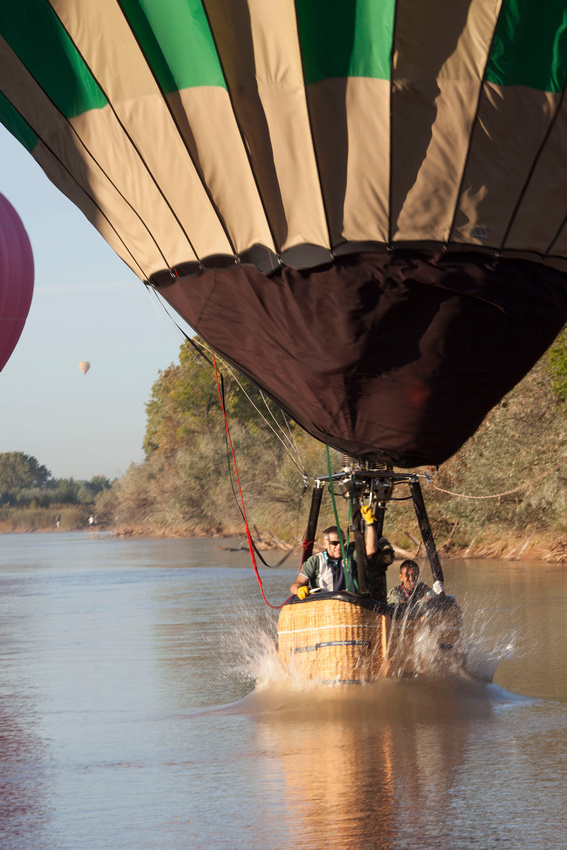 This balloon came down very quickly and plunged into the water making quite a splash. 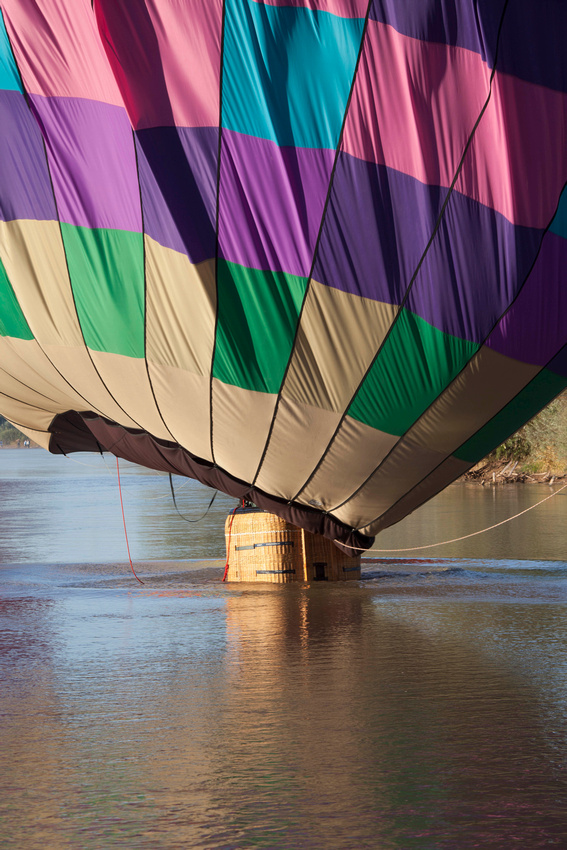 The envelope came down over the gondola, almost touching the water. 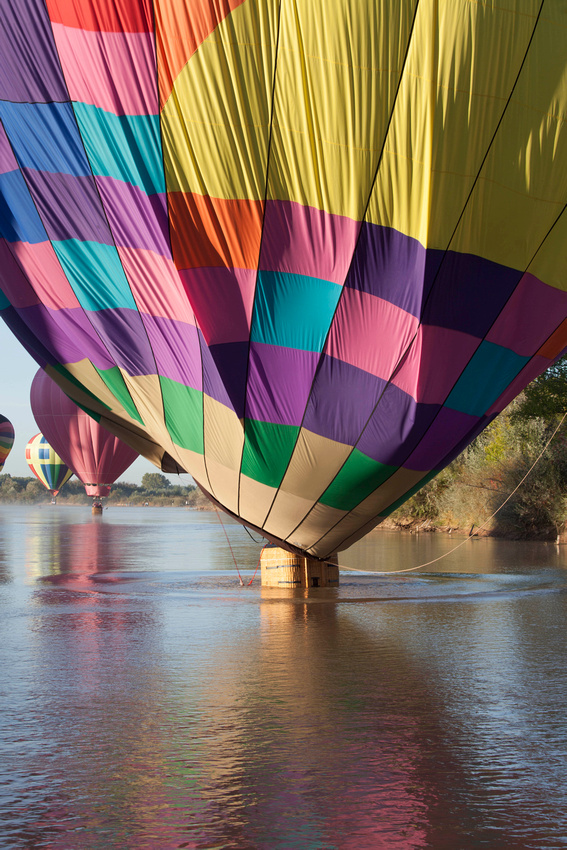 the envelope was suspended for a second before springing back up. 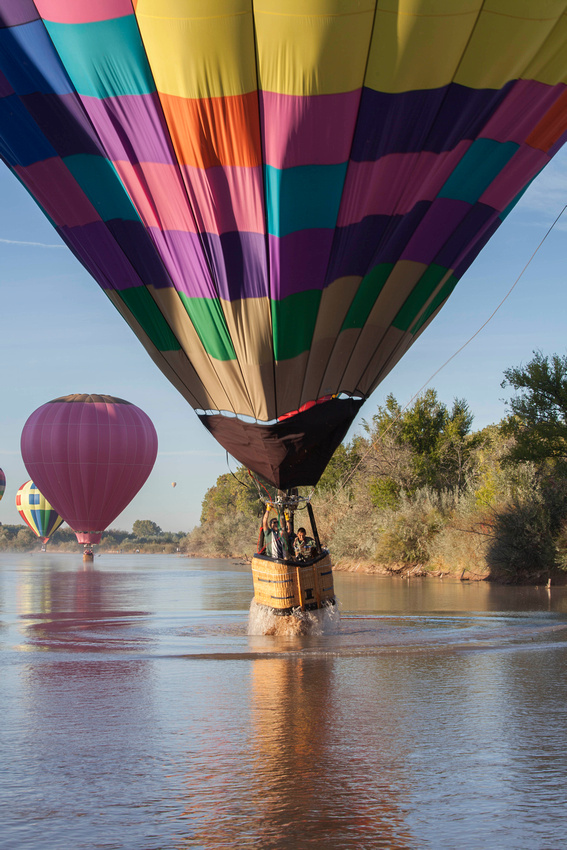 The envelope sprang up very quickly, yanking the gondola out of the water. 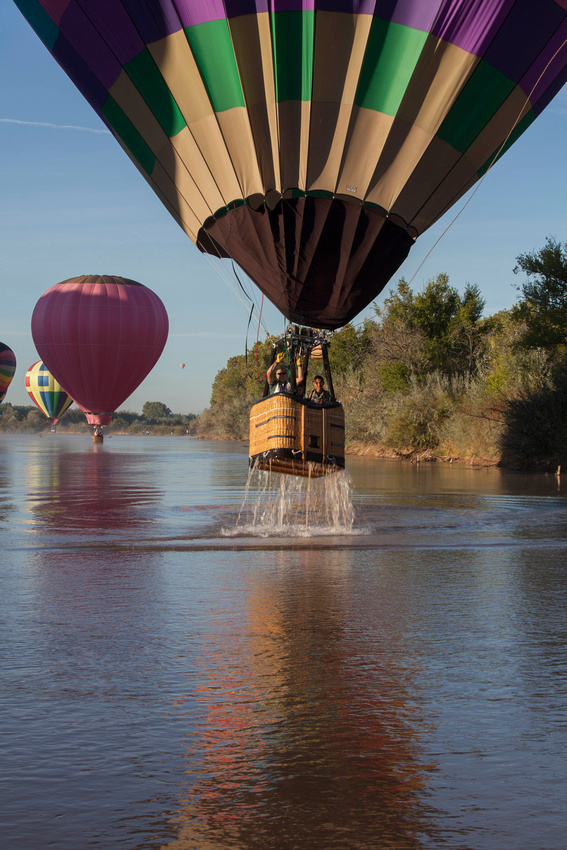 The gondola was swinging as water ran out of the bottom. 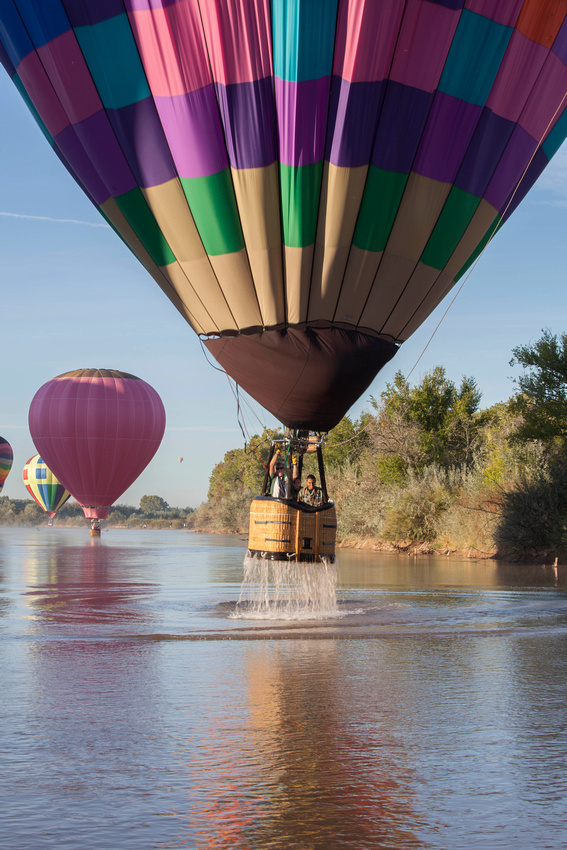 The balloon stabilized, hung in the air with the gondola still draining. 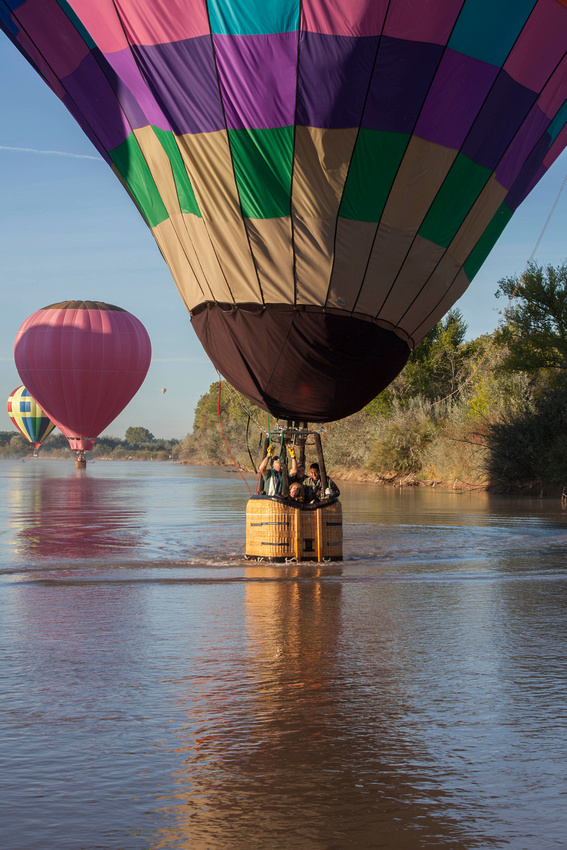 Then the balloon dropped the gondola back into the water, more gently the second time. 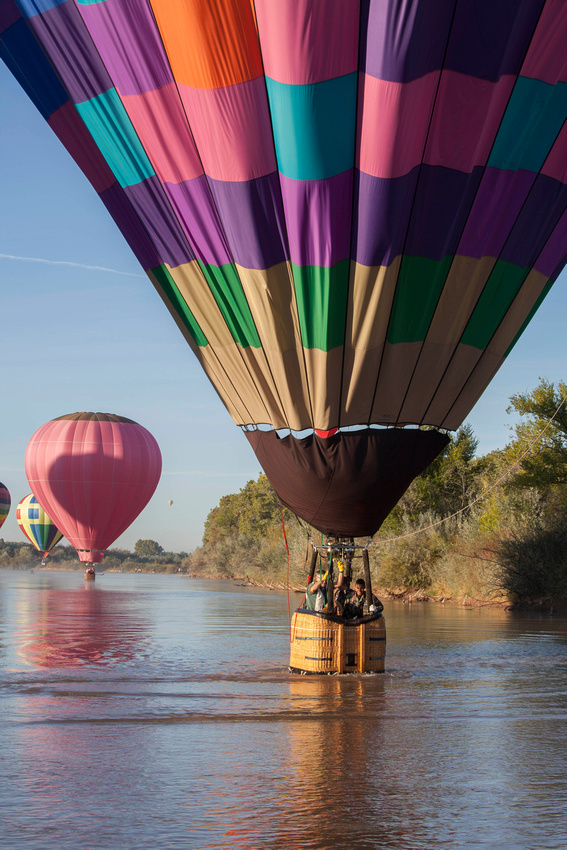 Once everything was stable, the pilot let the gondola sit in the water for several minutes before taking off again. 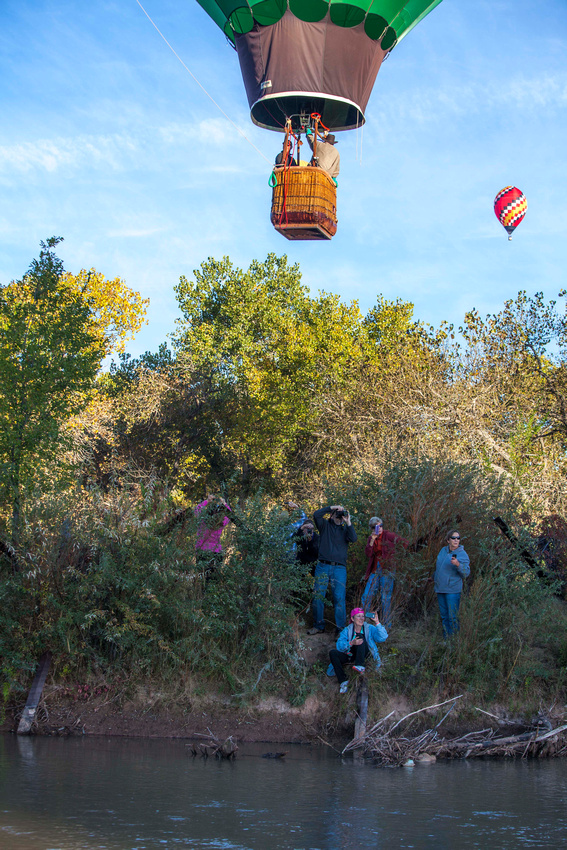 After I was out in the middle of the river, people started gathering along the banks. 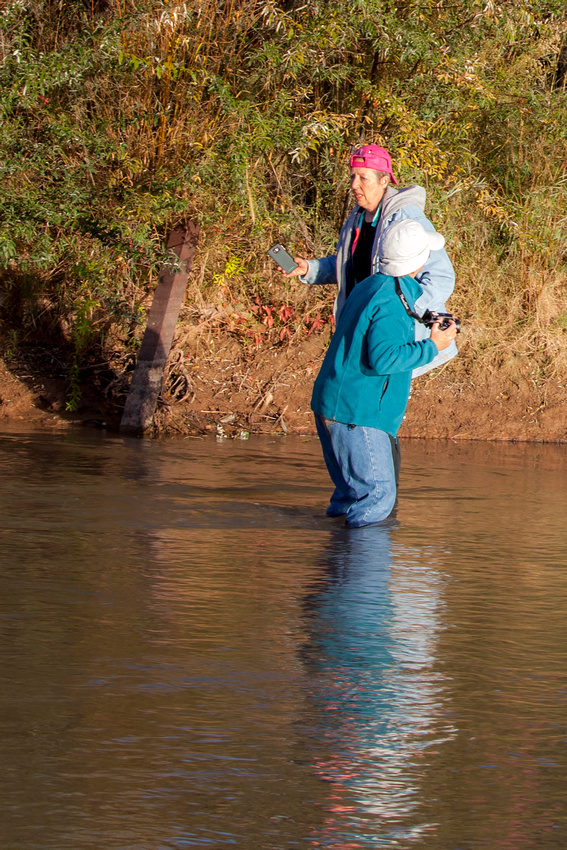 A couple of women ventured into the water, but only the woman in the white hat was adventurous enough to wade out to the middle where I was. Turns out she's President of one of the kayak clubs. 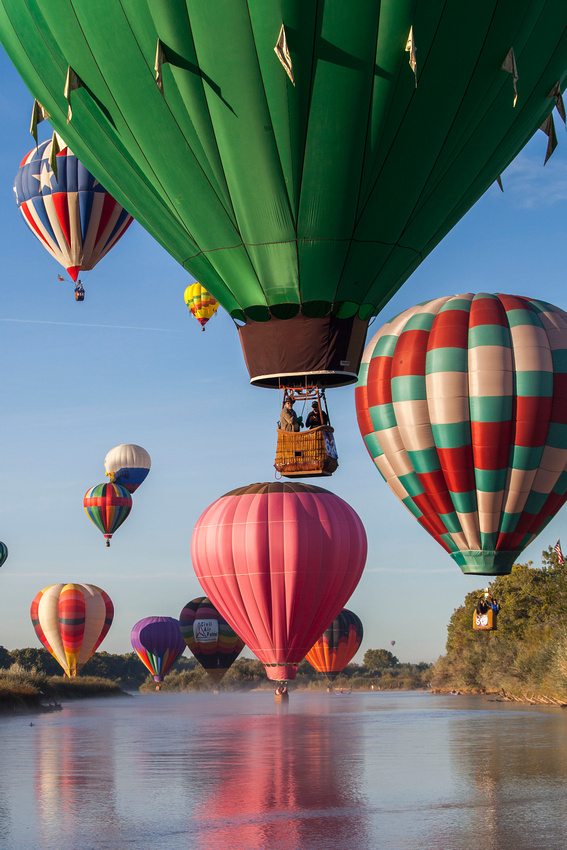 There were several balloons in the river at any given moment.

The whale balloon came right over me and splashed down about 30 feet from me. I didn't have my wide angle lens, so I had to do a panorama that only got only a thin slice of the whale. It's a huge balloon. 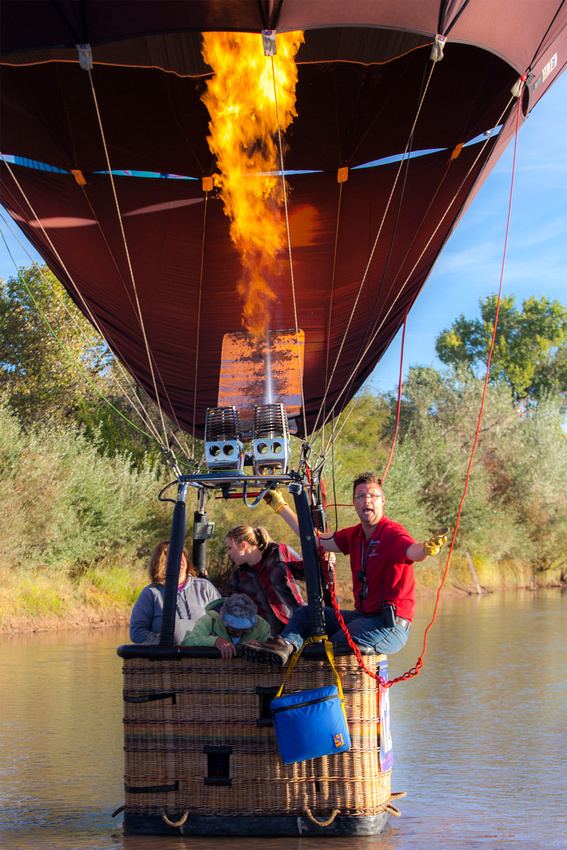 "Hey paparazzo! What are you doing standing in the middle of the Rio Grande?" 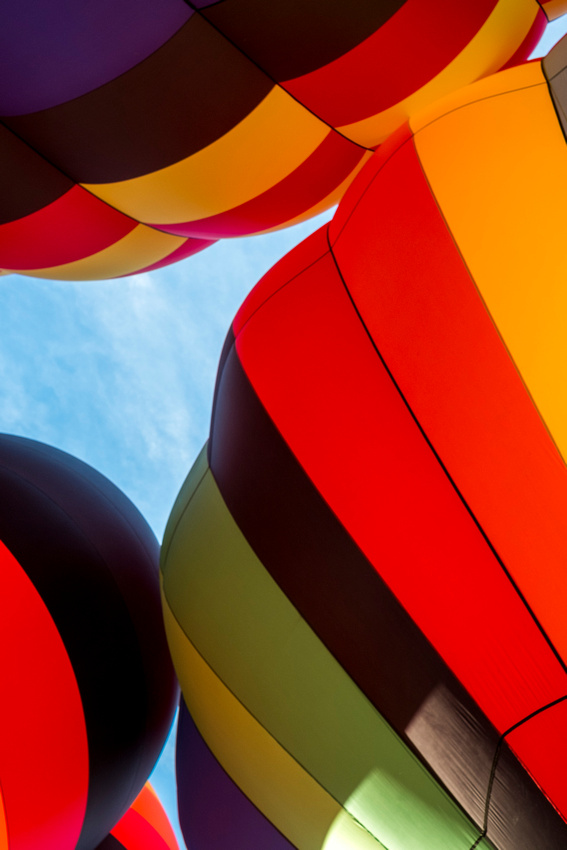 At one point three balloons splashed down about 10 feet away from me on three sides. Their envelopes were bumping together, but I could only get a portion of the three envelopes towering over me without my wide-angle lens (I would not have changed lenses while standing in the Rio Grande). 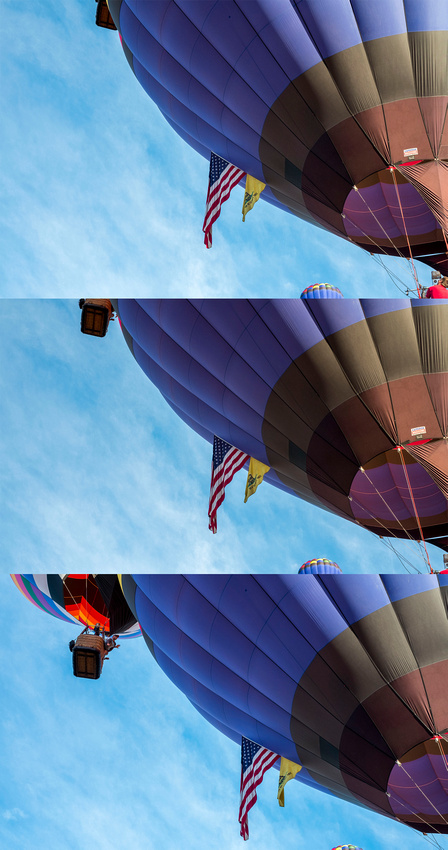 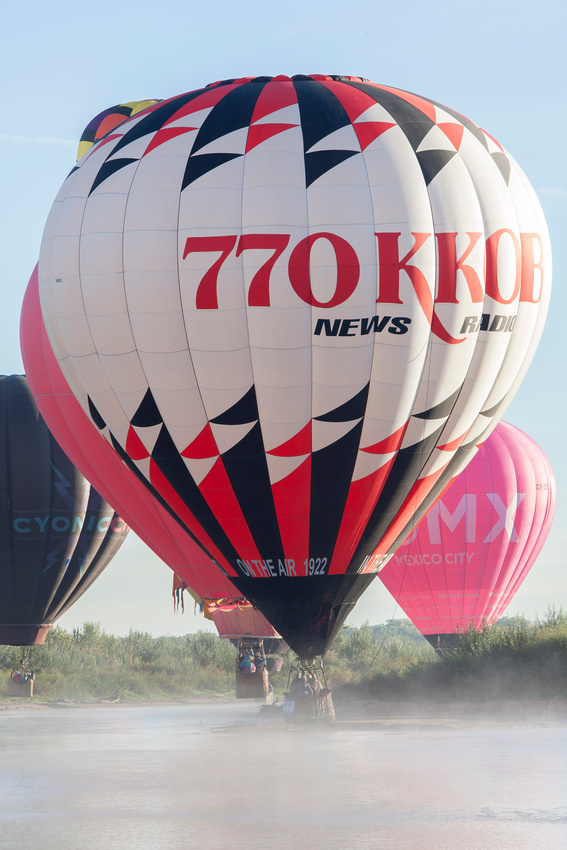 There was a mist rising off the surface of the Rio Grande for much of the time the balloons and I were in the water. 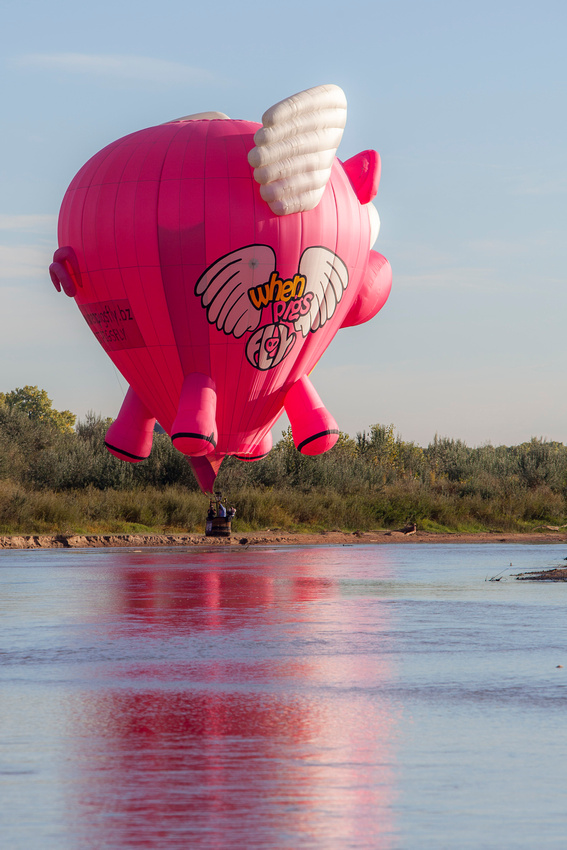 The flying pig was one of the last balloons to splash down before the river became quiet, and the balloons flew off to the northwest ending nine days straight of flying — the first time the balloons flew everyday of the fiesta since 1996, I heard someone say.

T & L Photos
Thanks, Nancy!
Nancy(non-registered)
One after another... you amaze me with these spectacular shots!
T & L Photos
Thanks, Miz Shaaz!
MizShaaz(non-registered)
WOW!!! This was so much fun to look at and read, great work! I feel like i was right there along. Wayy cool!
T & L Photos
Thanks, Julie! It was plain fun.
No comments posted.
Loading...
Subscribe
RSS
Recent Posts
Last Post on Zenfolio Walk, Run, Splash, Fly A Walk in the Snow We Wish You a Merry Catmas Cranes, Train & A Full Moon on Winter Solstice I Had A Dream Shrink Wrapped Fly Away Fire & Phantasm First Snow on the 2nd
Archive
January February March April May June July August September October November December
Timothy Price
Powered by ZENFOLIO User Agreement
Cancel
Continue