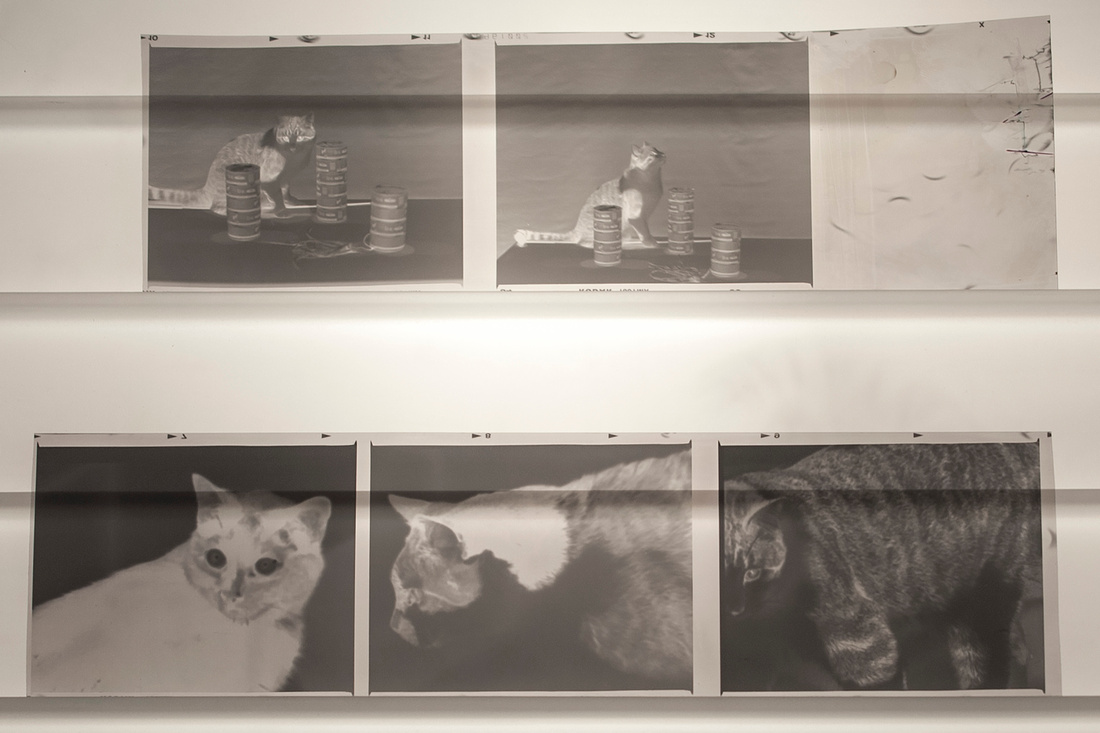 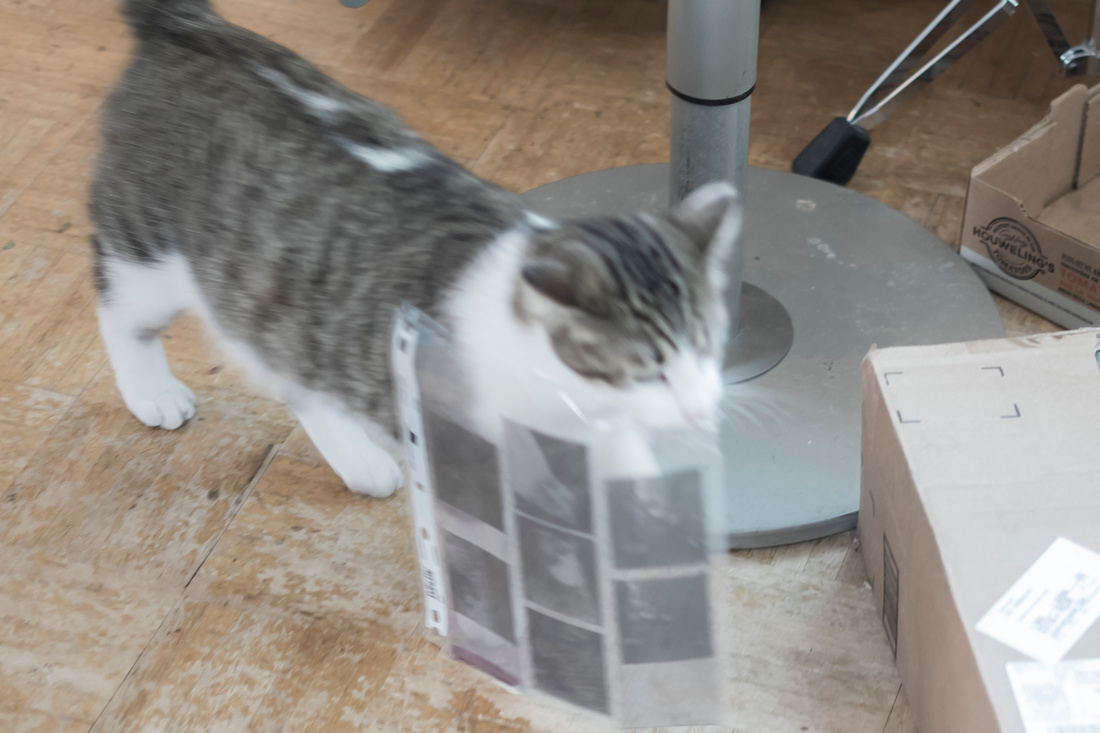 Spunk was so excited after the negatives were dry, cut and sleeved, that he carried them from the darkroom to the counter. 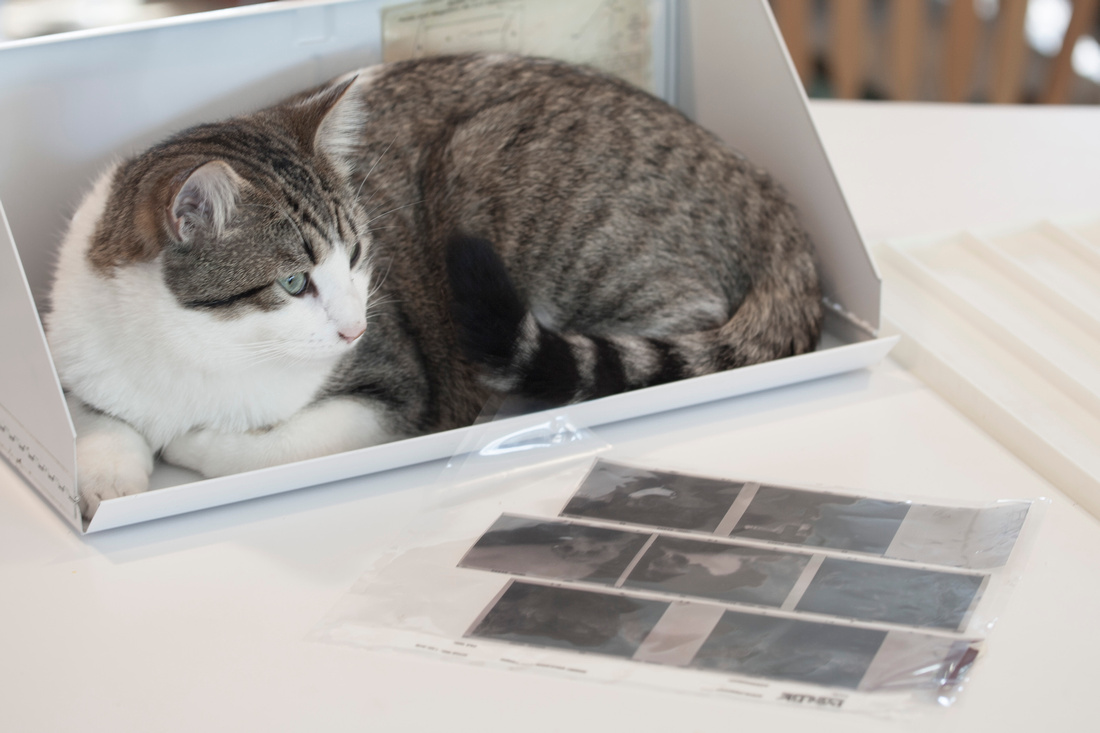 I found an old slide viewer in the shed, and Spunk helped assemble it. 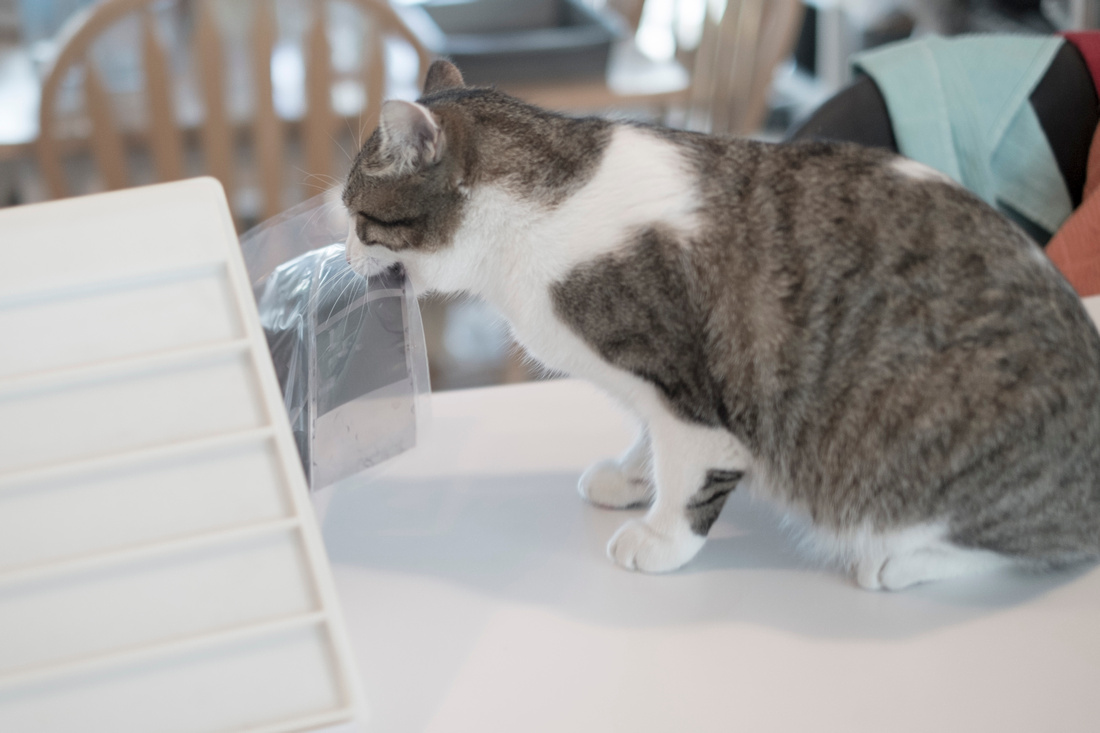 After we got the slide viewer together and I repositioned it, the negatives were behind the viewer. Spunk picked them up to put them on the viewer. 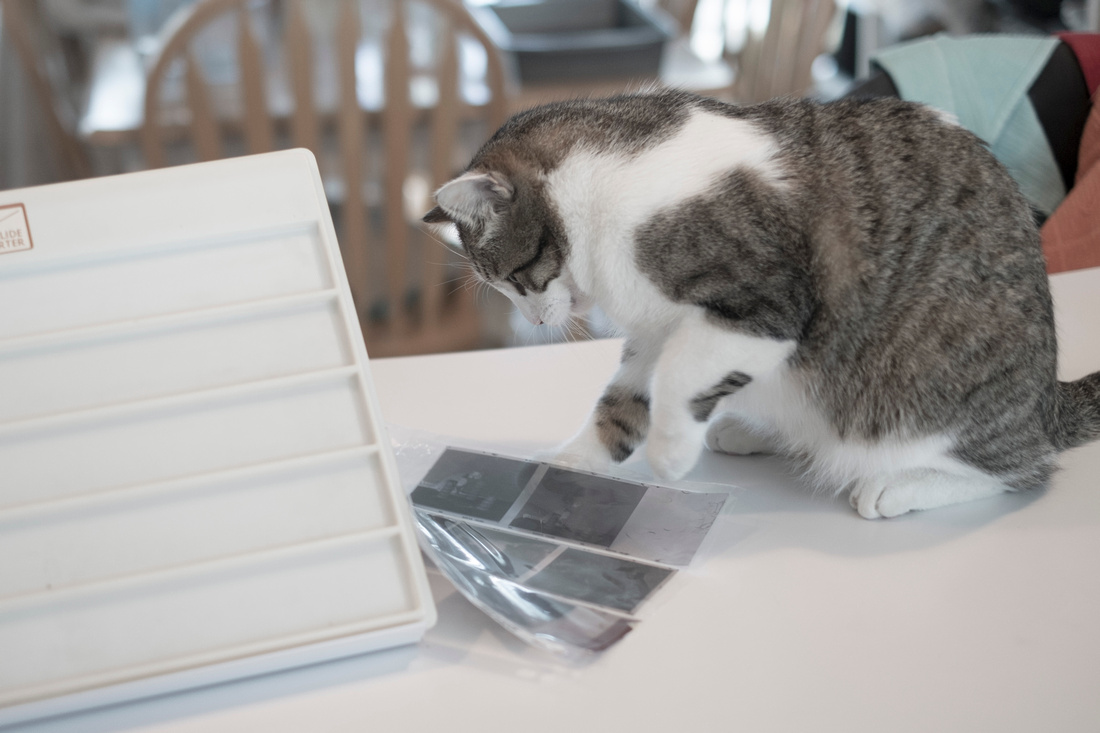 Spunk trying to pick up the negatives after his first attempt at putting them on the viewer failed. 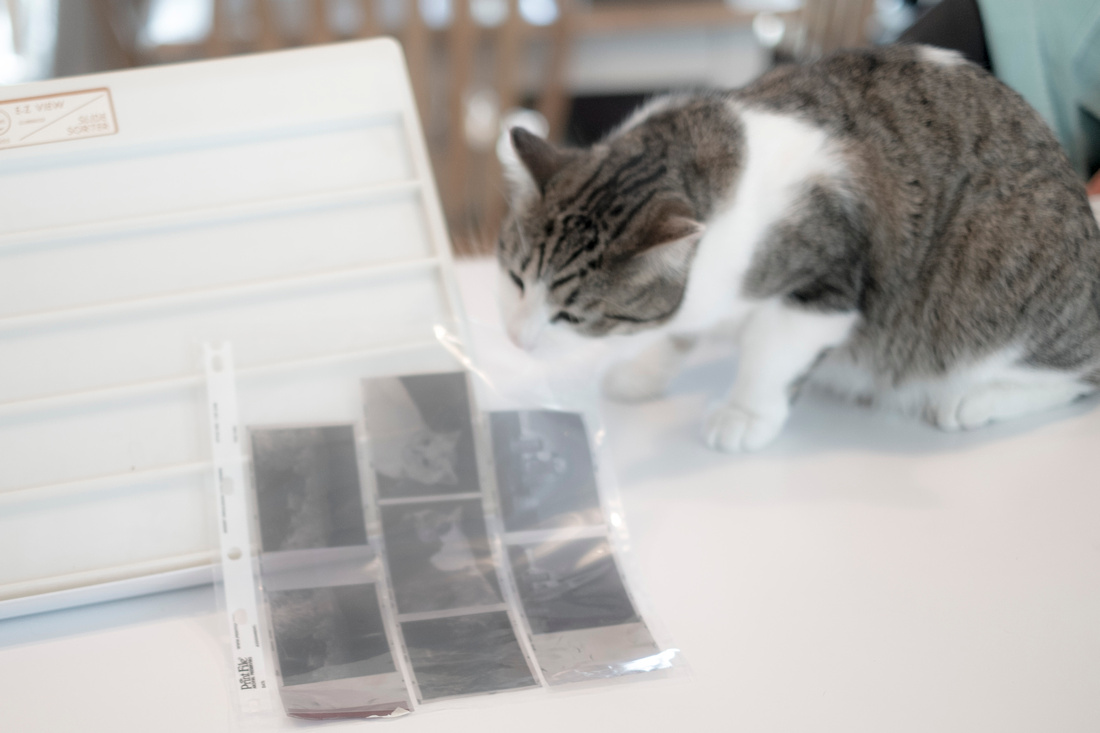 Spunk was very determined to get the negatives on the viewer. I explained that we needed to take them out of the sleeve and place them on the viewer. 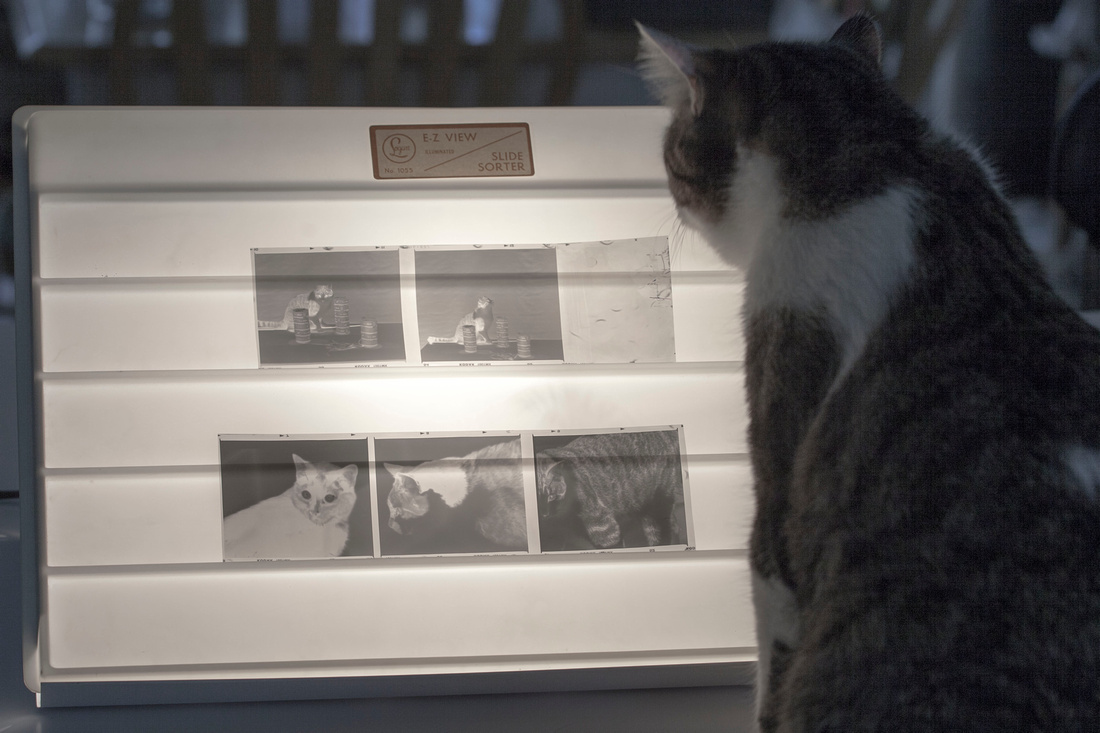 I removed the negatives from the sleeve and placed them on the viewer and turned off the overhead lights so Spunk could review them. 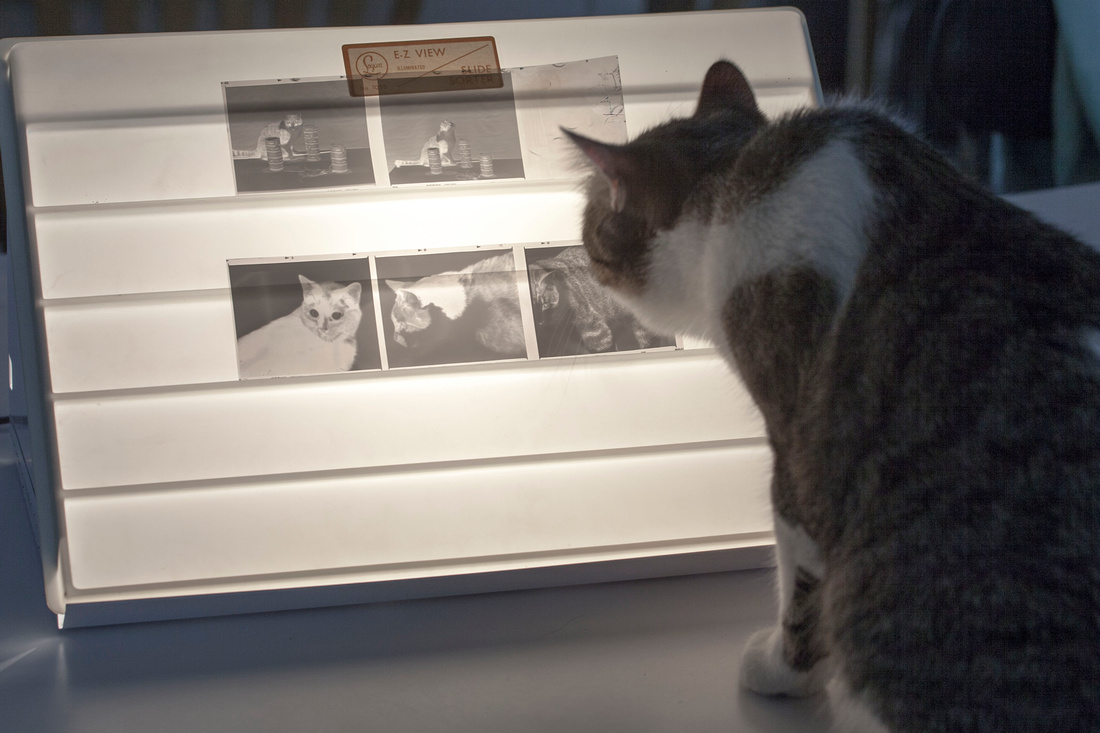 Spunk found the results of his photo session fascinating and scrutinized the images on the negatives closely one by one. 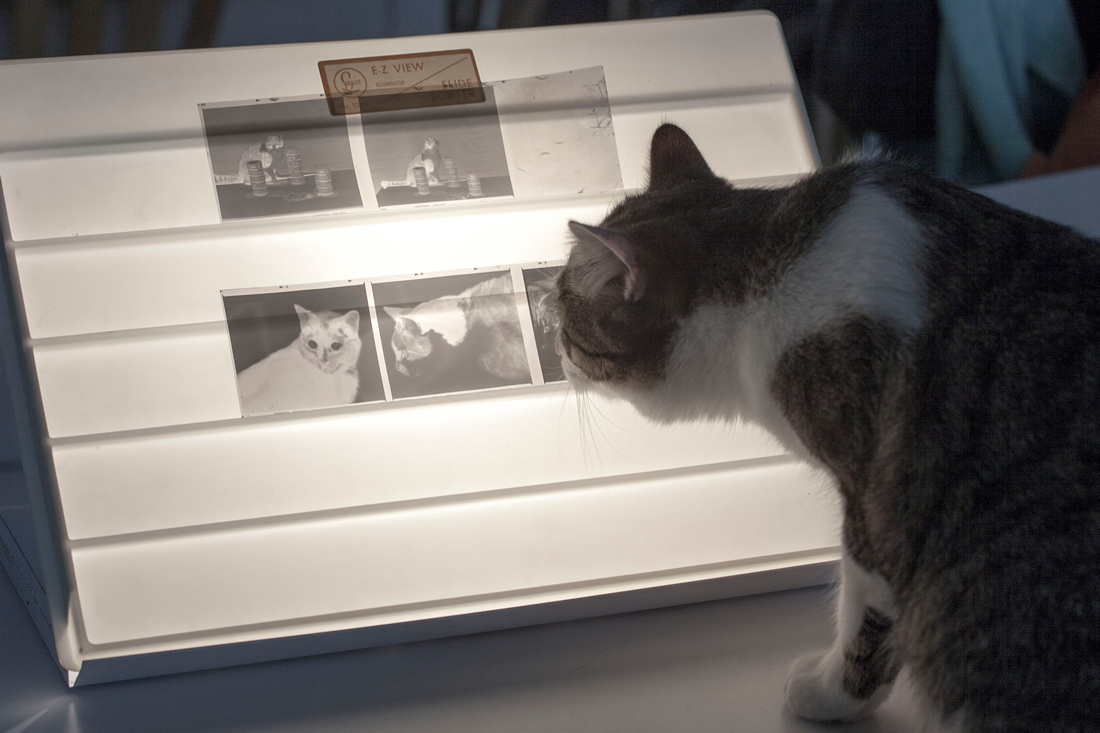 Scrutinizing the middle image of Diné. 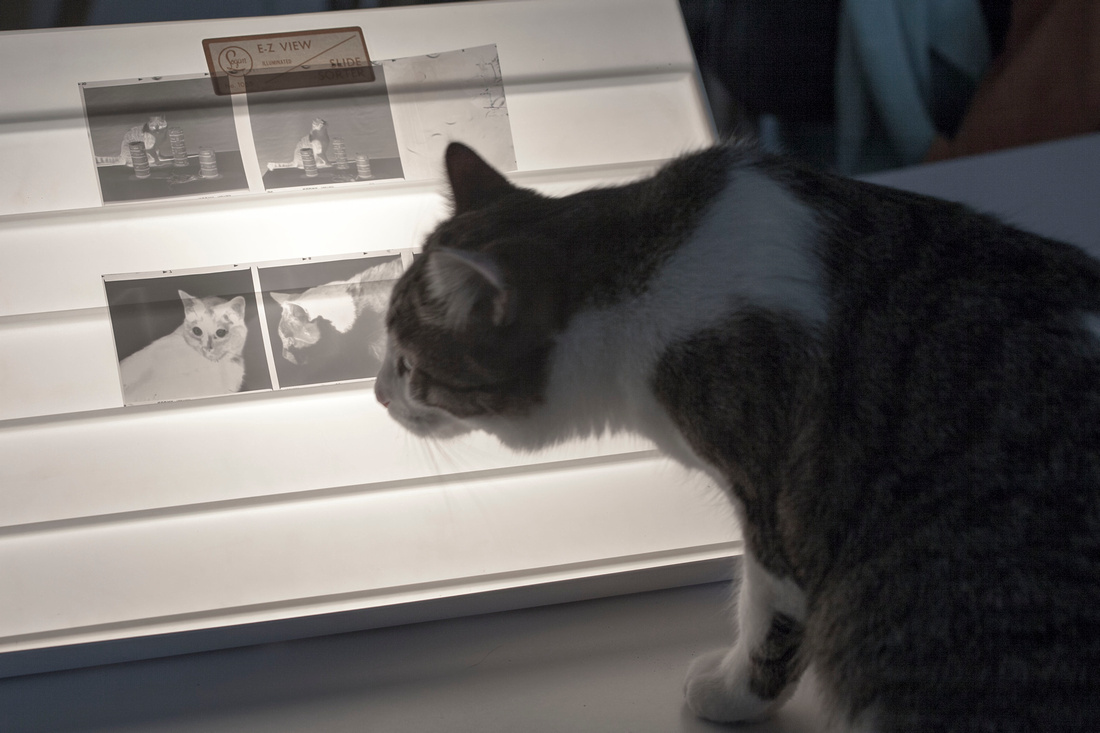 Checking out the first photo he took of Najar. Spunk wants to see the three negatives on the bottom printed, so I'm going to print them as soon as I get a chance.

T & L Photos
Thanks, Terri! Hmmm! We'll see how he does with the loupe when he starts using the 4X5 View camera!
ImagesbyTDashfield(non-registered)
If you can teach Spunk how to use a loupe then it's all over! LOL
T & L Photos
Thanks, Douglas! He hasn't figured out what fame is yet.
Douglas Moorezart(non-registered)
Is fame going to Spunk's head?
T & L Photos
Thanks, Couriers! Spunk's getting anxious me to print the negs for him.
No comments posted.
Loading...
Subscribe
RSS
Recent Posts
Last Post on Zenfolio Walk, Run, Splash, Fly A Walk in the Snow We Wish You a Merry Catmas Cranes, Train & A Full Moon on Winter Solstice I Had A Dream Shrink Wrapped Fly Away Fire & Phantasm First Snow on the 2nd
Archive
January February March April May June July August September October November December
Timothy Price
Powered by ZENFOLIO User Agreement
Cancel
Continue