Tailgating One Oh! One 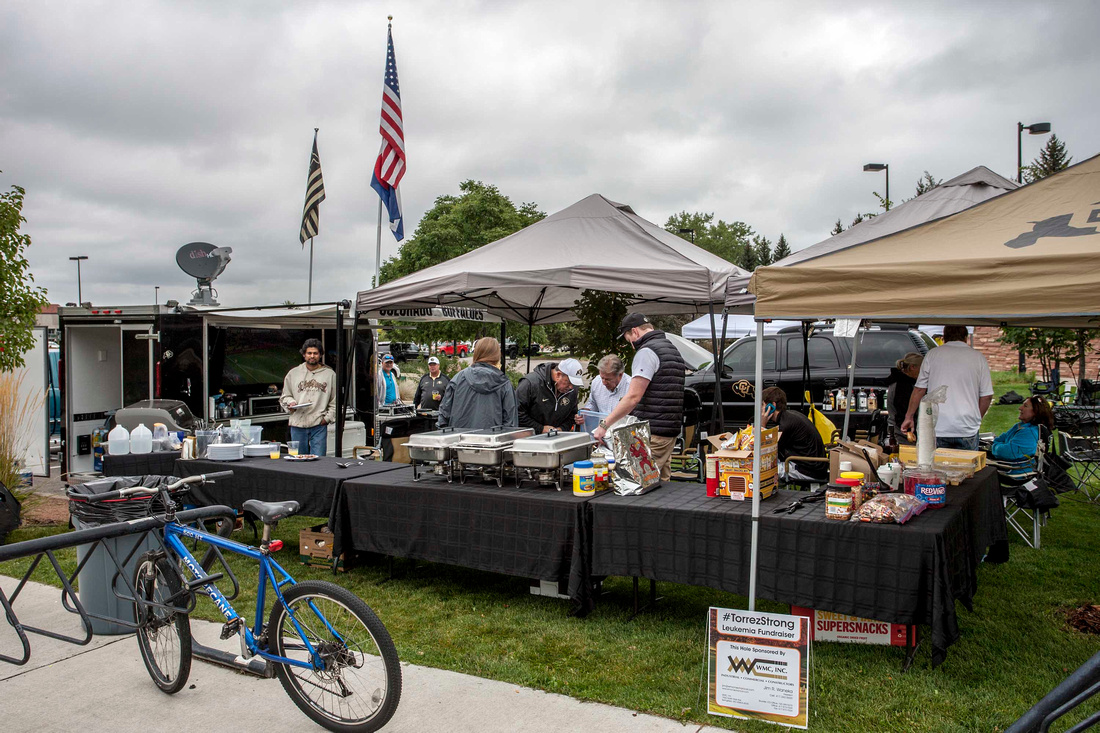 This is one of the first large tailgating operations I came across. They asked if I wanted to try some of the food, and I politely declined, but once they found out I was from New Mexico, they insisted I try one of their breakfast burritos.  I was handed a burrito and a beer, but I told the host I didn't drink beer and he said "Great! Gives me a good excuse to have another beer!" This tailgate setup was sponsored by WMC, Inc. an engineering consulting group out of St Louis, I believe, who is opening a branch in Denver. On the menu for free were various burritos, bratwurst, pancakes, hamburgers, eggs cooked to order, beer and an open bar. And the hosts were so gracious and friendly.

I imagined Tailgating to be a process of showing up early to the parking lot of a football stadium before a game, pulling out coolers and hanging out around the coolers drinking whatever beverages are allowed, and whooping it up a little in preparation for the game. Not in the least at CU Boulder, as I got a crash course in Tailgating 1 Oh! 1 on Saturday, September 17th when the CU Buffalos faced off against the Northern Colorado Bears.

Basically the whole campus is open for tailgating from a few small groups to large, well organized groups setting up for pre-game festivities. Everything is "Buff" and at first I thought it concerned all the young people with athletic bodies running around, but I was soon set straight that "Buff" is for "Buffalo". They have a live buffalo mascot named Ralphie, who performs at halftime. Besides multiple grills, food warmers, beer on tap, and lots of coolers filled with beverages, each formal and informal tailgate had "Cornhole" boards set up with people trying to toss beanbags through the holes in the boards. I got the complete rules of Cornhole explained while making the rounds.

Besides the various setups in most of the parking lots around campus, Franklin Field outside of Folsom Field Stadium had tents set up for various activities around the perimeter of the field. In a large grassy field in front of the Duane Physics and Astrophysics Building they had tables with umbrellas, a bandstand, a bar, and Ralphie, the buffalo, in a corral. The President of the Regents, I believe, was being introduced while I was wandering around the area. Then I came across the Golden Buffalo Marching band lined up around the Imig Music building, ready to march to the stadium. The band formed a long line as they must of had 200 or more musicians.

Almost everywhere I walked, people stopped me and asked if I was with the Colorado Daily, and then chatted and explained the various activities associated with tailgating, history of the campus, the architectural style, and the buffalo culture. I was offered food and drink at almost every tailgate party where people inquired about who I was with. All the people were very friendly and hospitable. I also ended up talking to different police officers and they said they had a good crowd and that there was rarely any fighting or other serious trouble at the tailgating or the games. Coming from New Mexico, I found it hard to believe they didn't have fights, but I certainly didn't see any hostilities.

The Buffalos lost to the Bears. 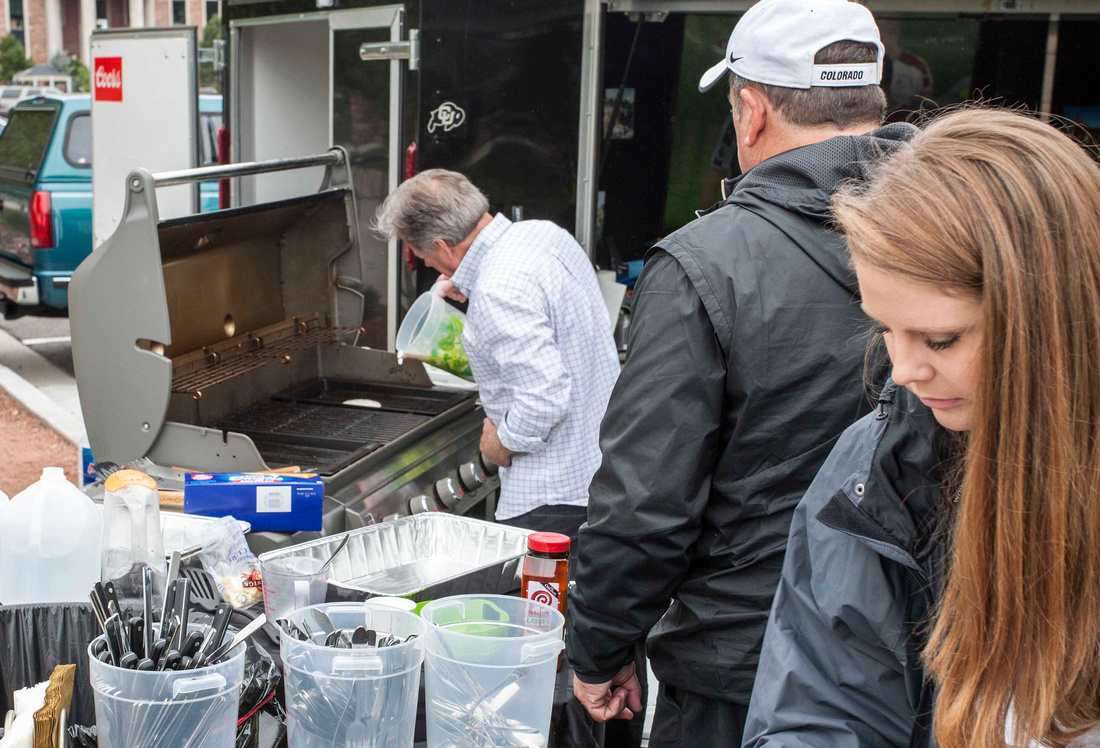 Pancakes going on the grill. 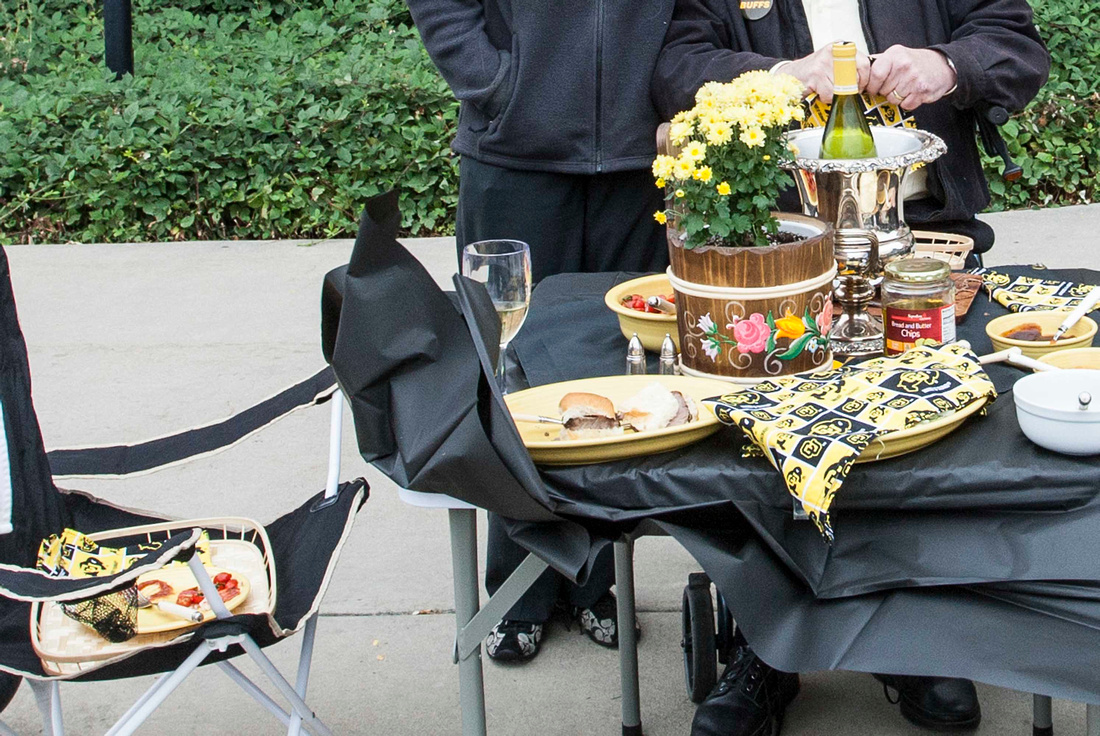 Tailgating in style with champagne, salad and steak sandwiches. 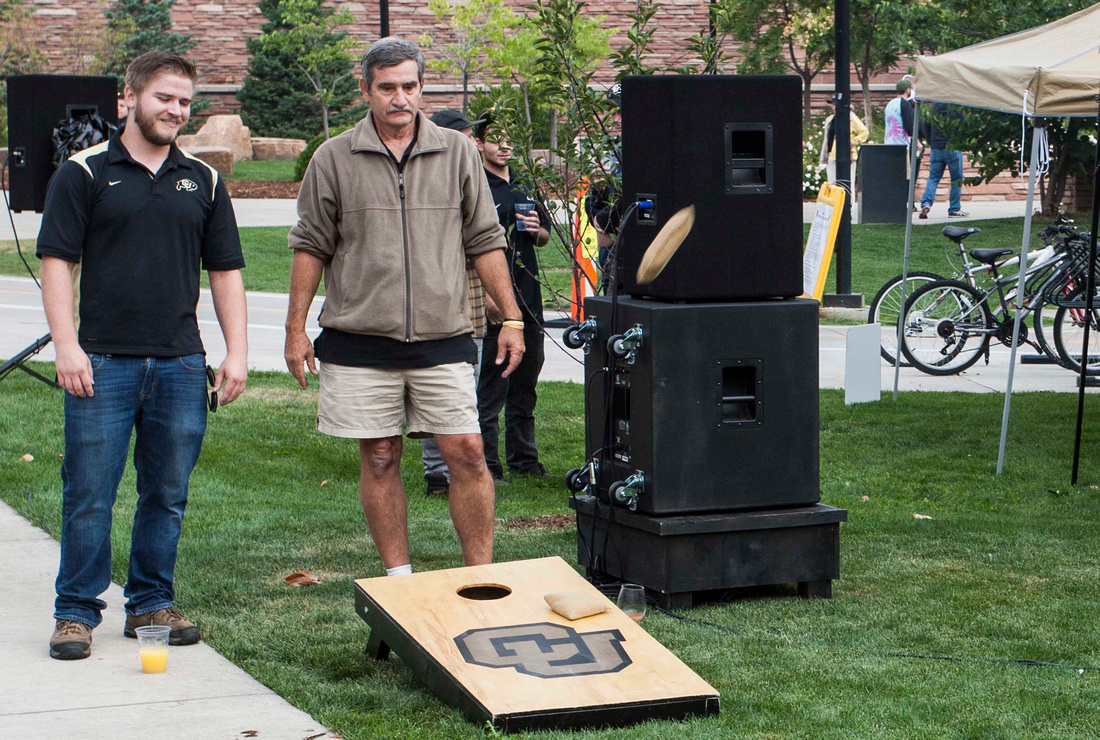 One of many Cornhole games with CU boards. 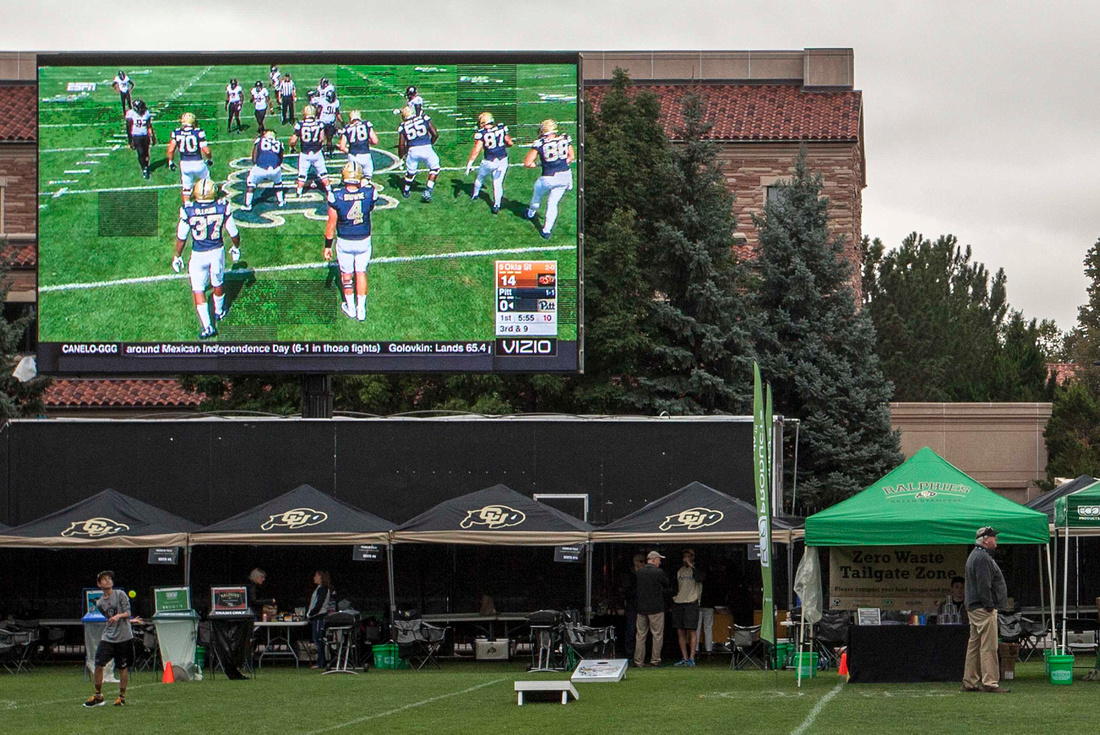 Click here to go to the web page with the tour. 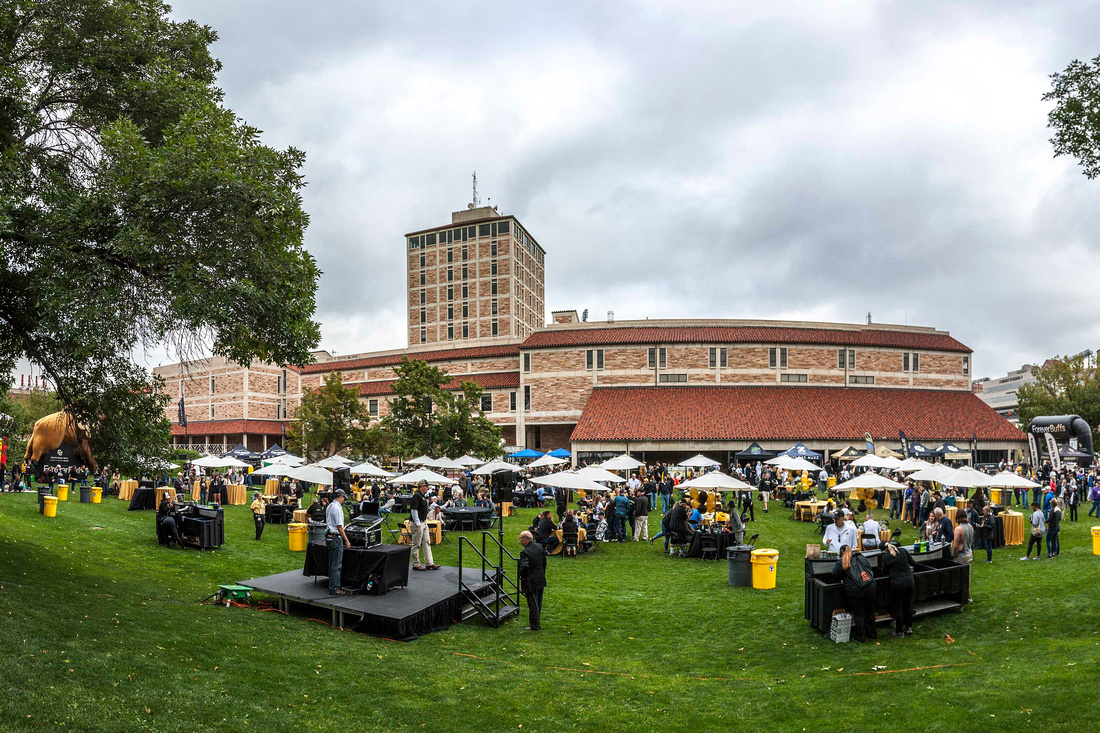 Tables on the field with the Duane Physics and Astrophysics Building in the background. 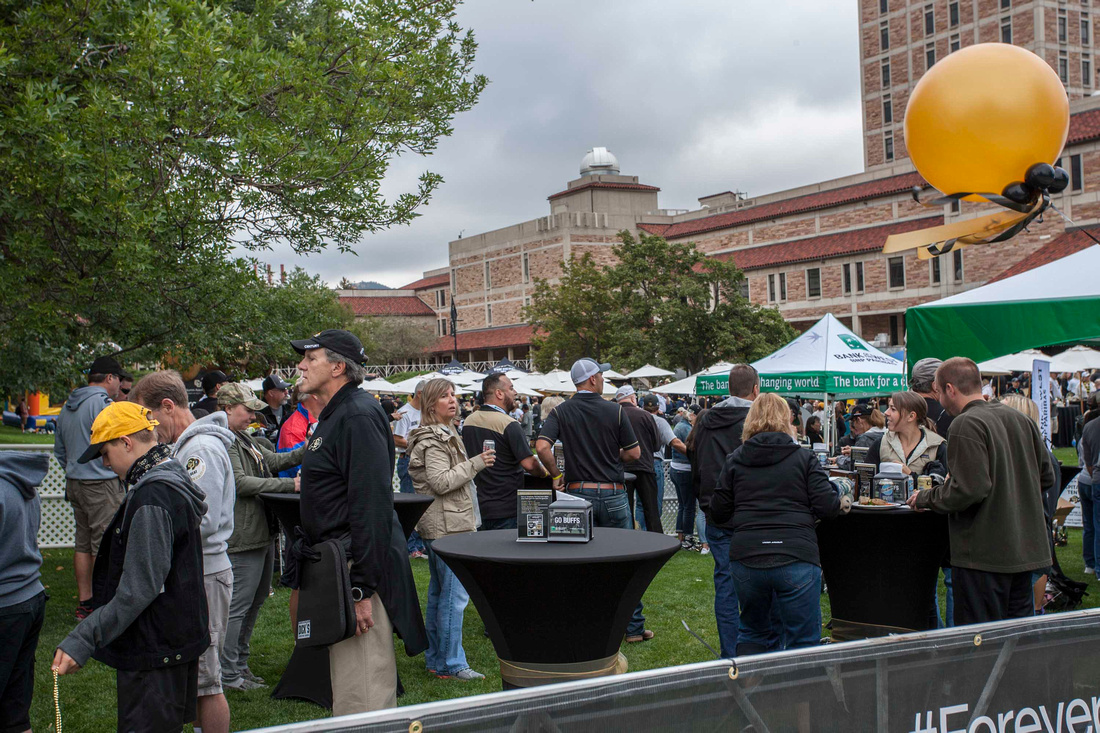 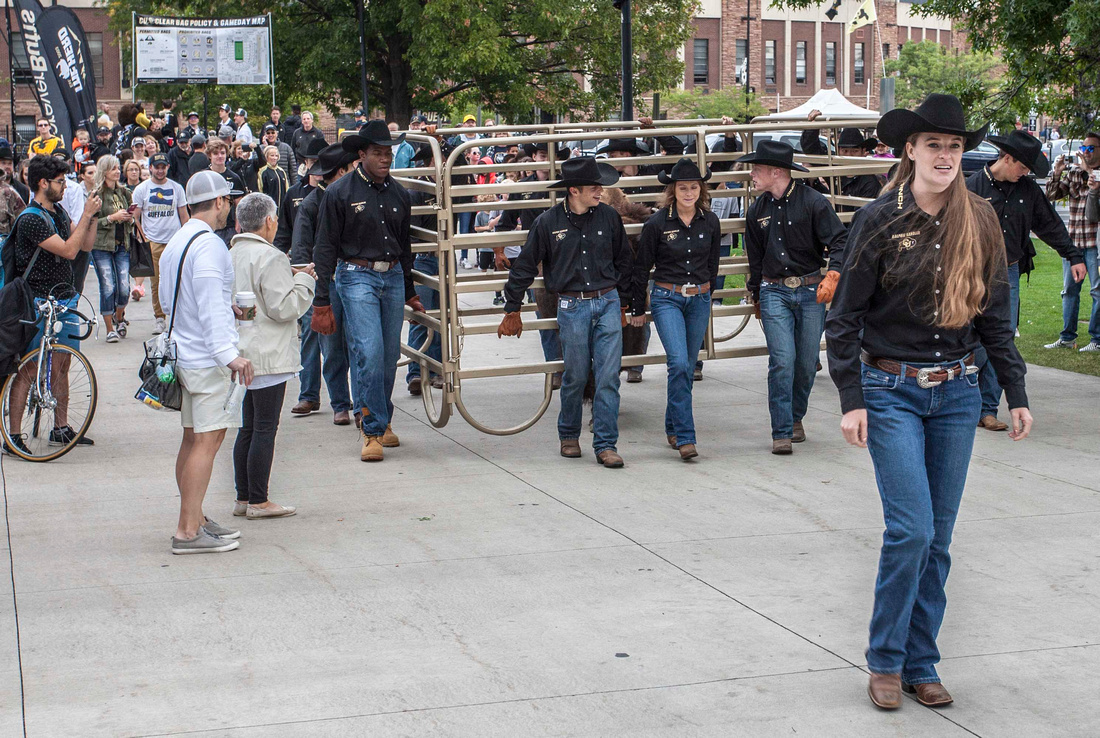 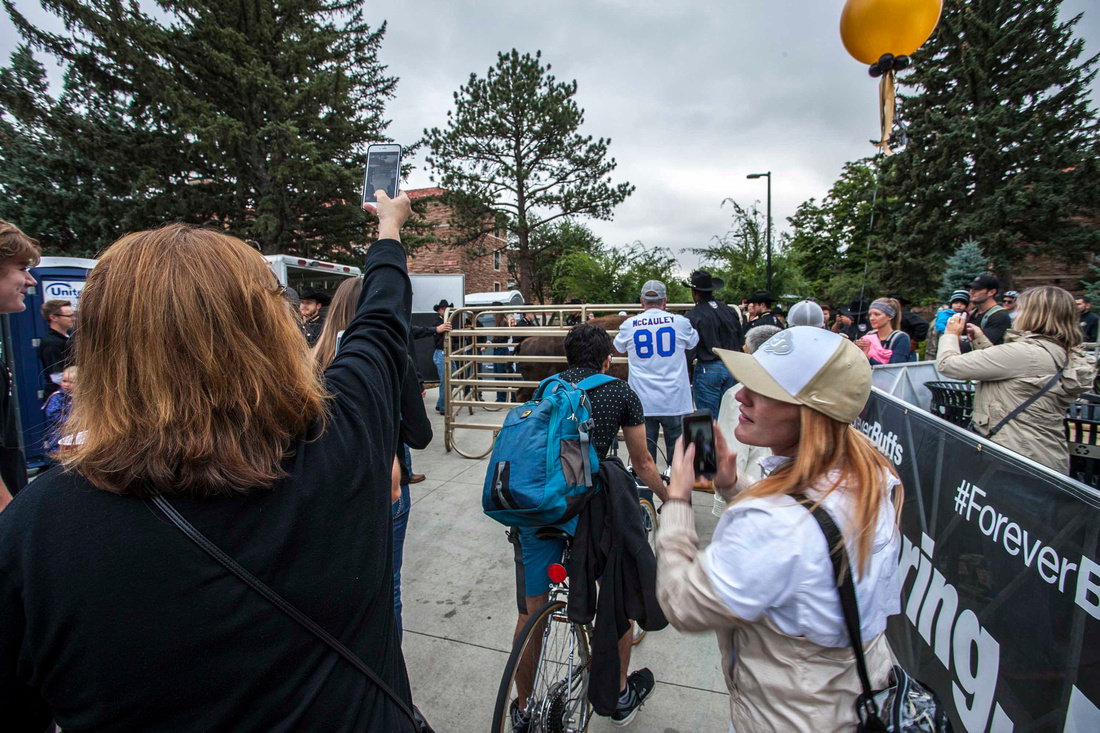 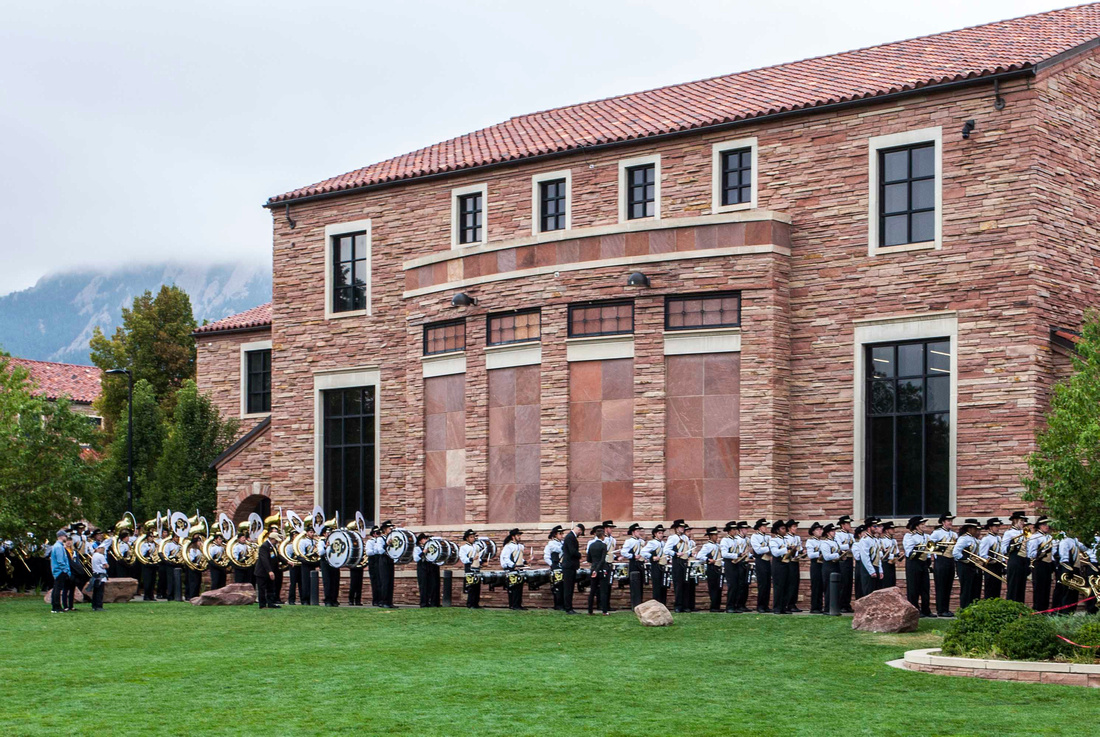 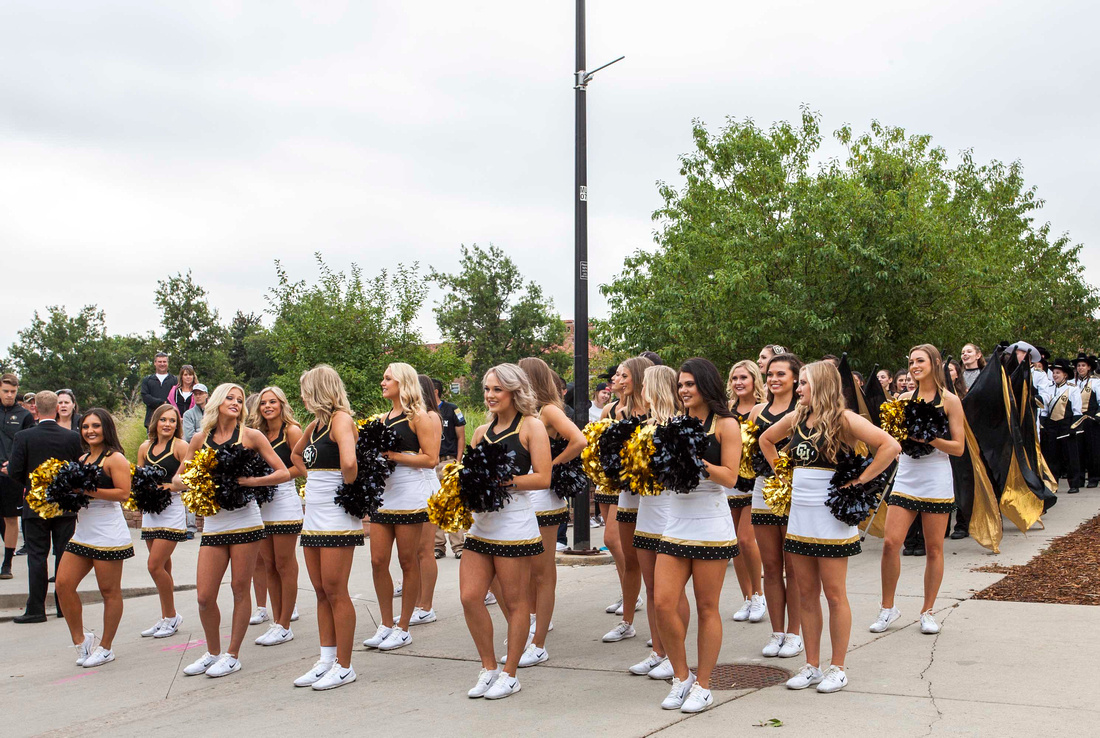 Cheerleaders lined up to lead the march to the stadium. 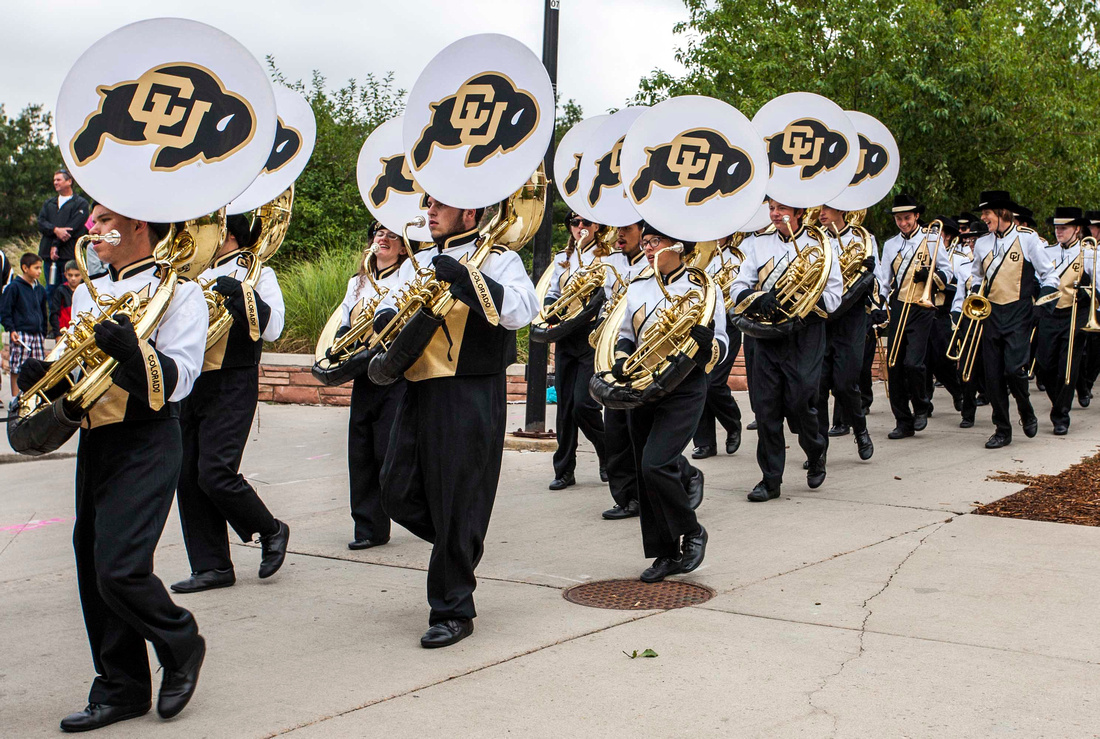 CU Sousaphones and a little short of Seventy-Six Trombones 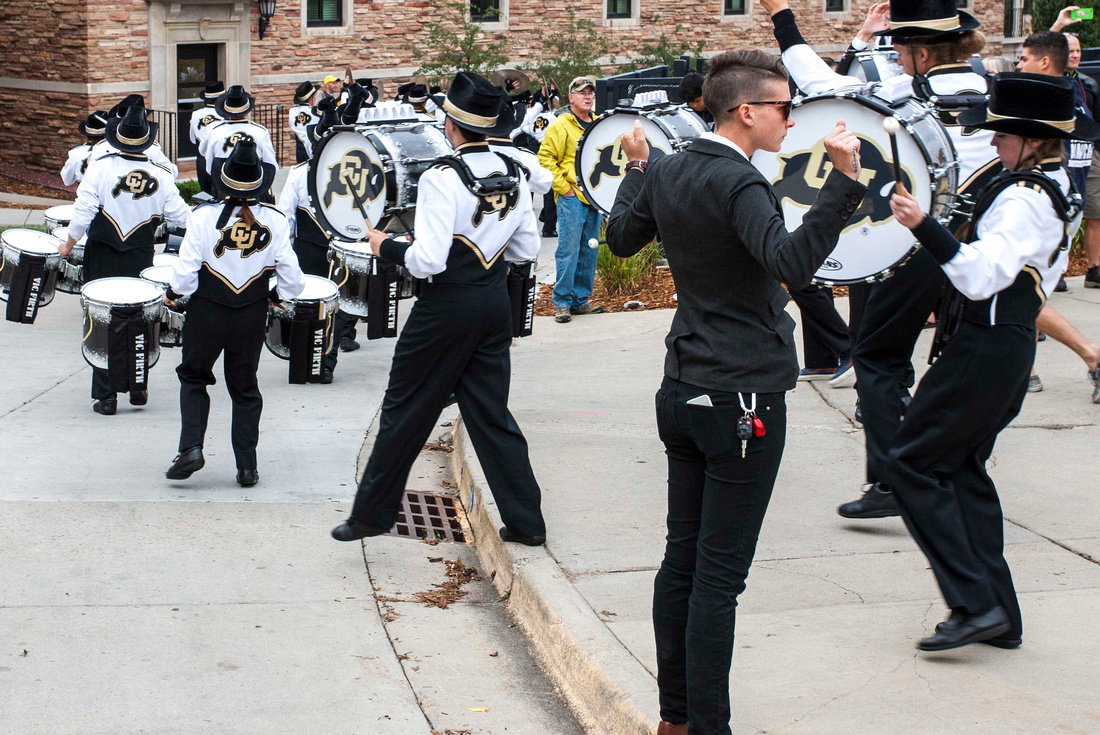 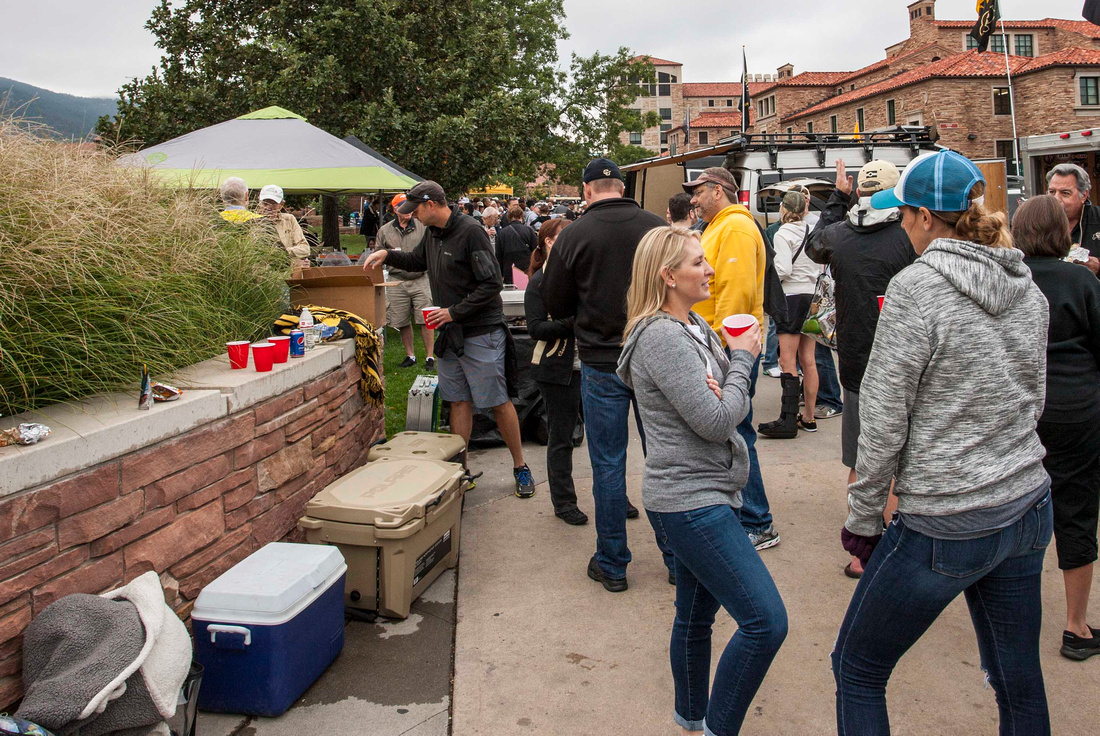 And yet another crowd of tailgaters. 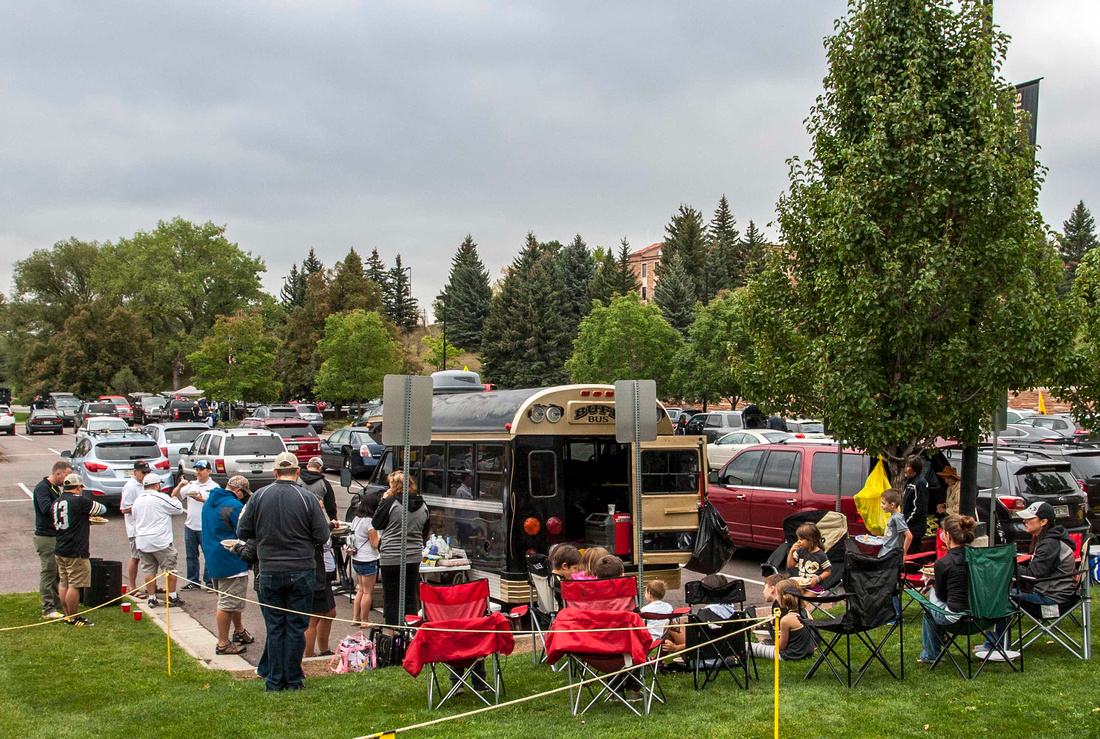 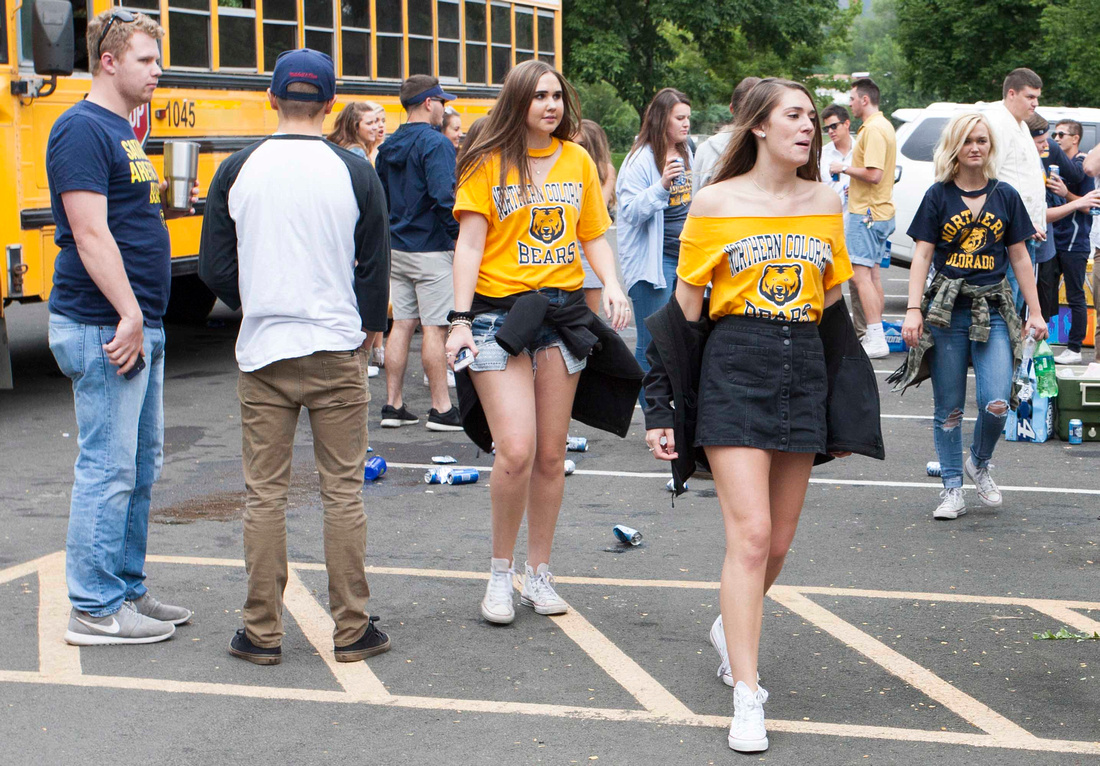 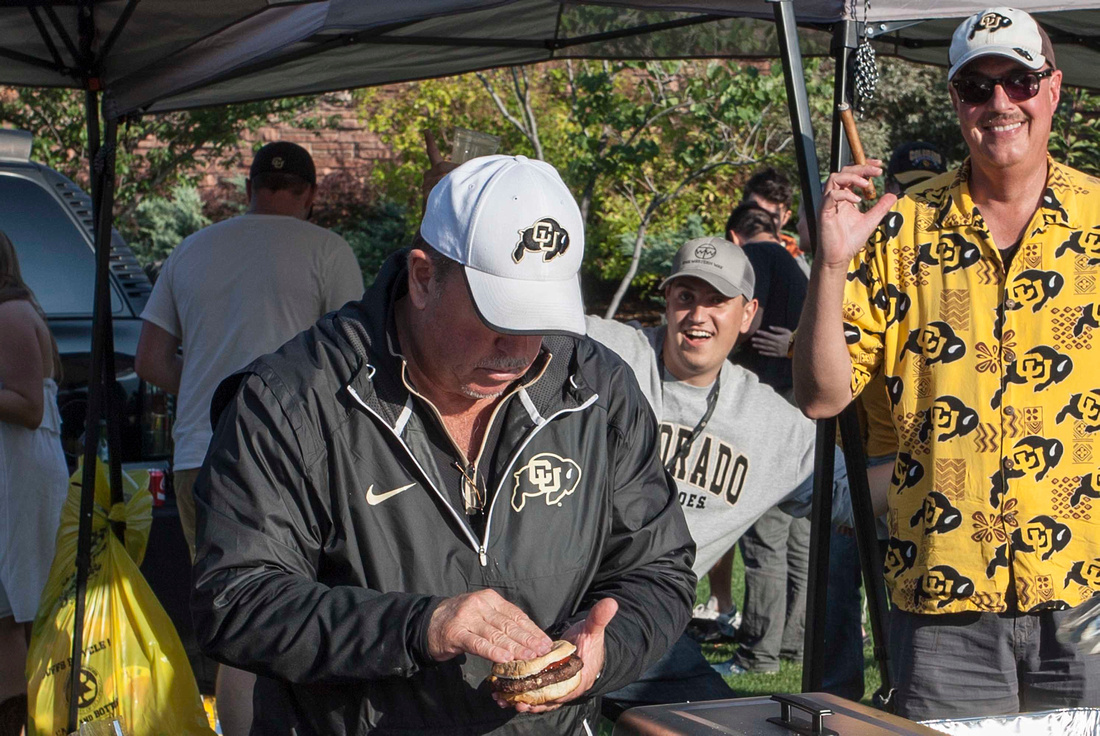 T & L Photos
Thanks, Julie!
Julie(non-registered)
Hey Tim. Looks like a great day. That sure does looks like tailgating in style .. champers and steak sandwiches! Great images ..
T & L Photos
Hi Harry. You should try tailgating at the next soccer game!
Harry(non-registered)
No, we don't have tailgating before soccer games :-(
T & L Photos
Hi David. I figured the officers were not telling the whole story. Down here I think they would need the riot gear for anything of that scale. Laurie had more fun at the conference than she would have wandering around the tailgaters.
No comments posted.
Loading...
Subscribe
RSS
Recent Posts
Last Post on Zenfolio Walk, Run, Splash, Fly A Walk in the Snow We Wish You a Merry Catmas Cranes, Train & A Full Moon on Winter Solstice I Had A Dream Shrink Wrapped Fly Away Fire & Phantasm First Snow on the 2nd
Archive
January February March April May June July August September October November December
Timothy Price
Powered by ZENFOLIO User Agreement
Cancel
Continue