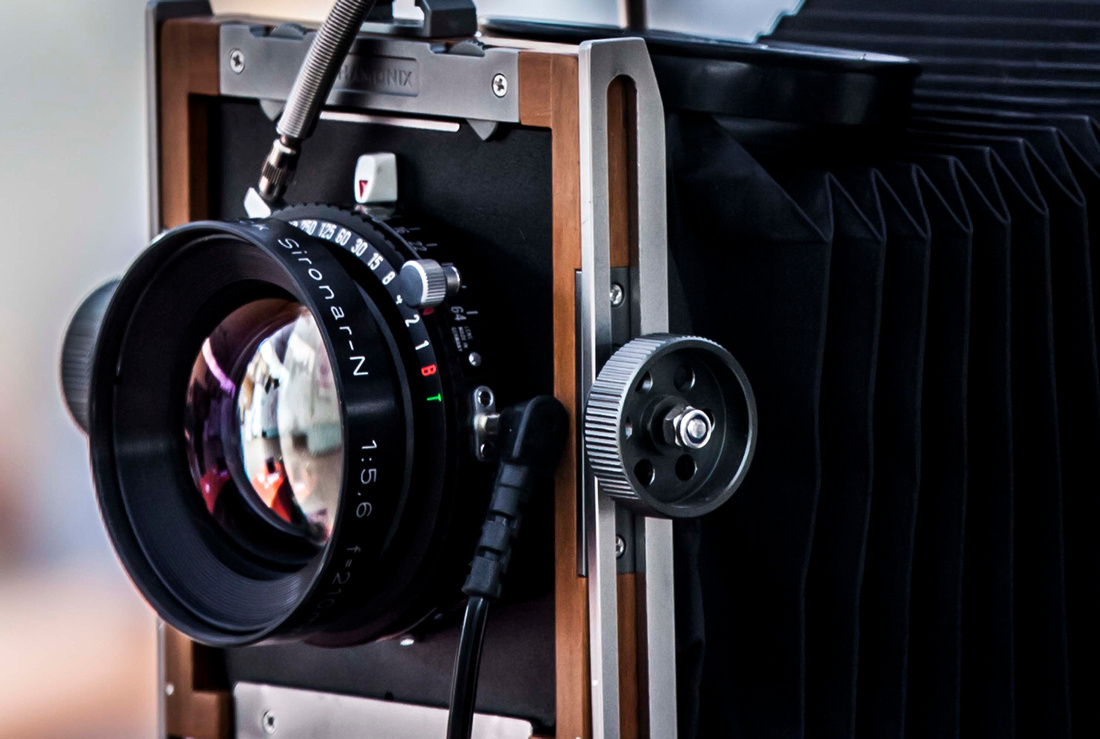 The collodion process was invented in 1851 by Frederick Scott Archer and Gustave Le Gray independently and pretty much simultaneously. You may be more familiar with the collodion process known as the "tintype" which is basically what Kevin Black who has Santa Fe Wet Plate is doing on aluminum plates. Kevin can be reached at 215-592-0830 or [email protected] I was very excited to see Kevin's booth at the Corrales Harvest Festival, because I was going to get into the wet plate and other classic alternative processes, but all the health issues and life got in the way.

A collodion wet plate is very slow by modern film and digital ISO standards, at around 1 ISO; however, that is quite fast compared to other processes used in the 1850's like the daguerreotype which it eventually replaced.  The collodion process was used mostly to make negatives on glass plates, but there was also an ambrotype process, which was an underexposed negative backed with black paper or velvet; and the tintype process on a black polished metal surface, also known as a ferrotype. 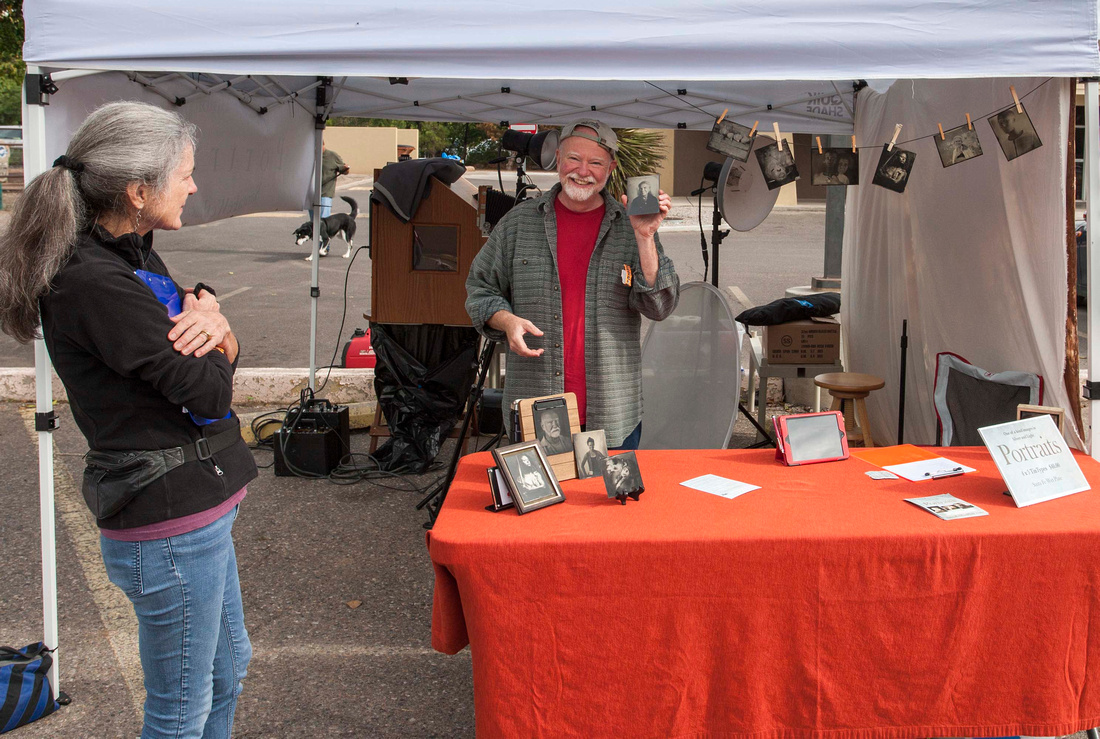 Kevin Black in his portrait studio booth with sample tintype collodion prints at the Corrales Harvest Festival. His portable darkroom stands behind him. 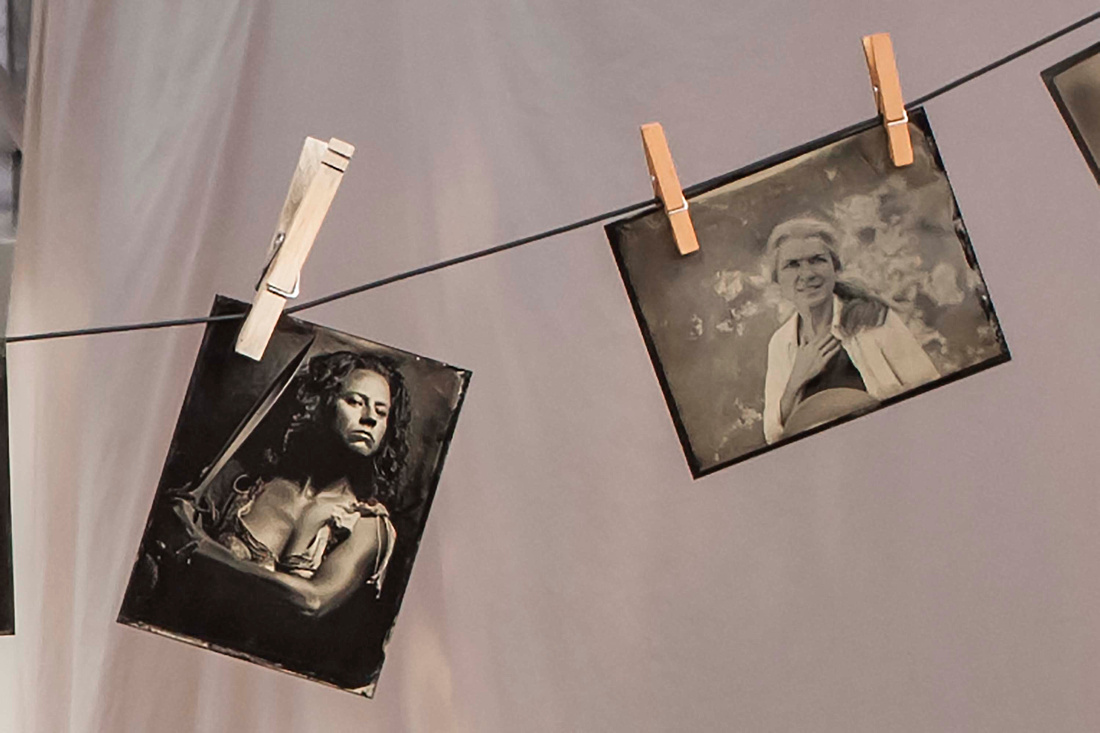 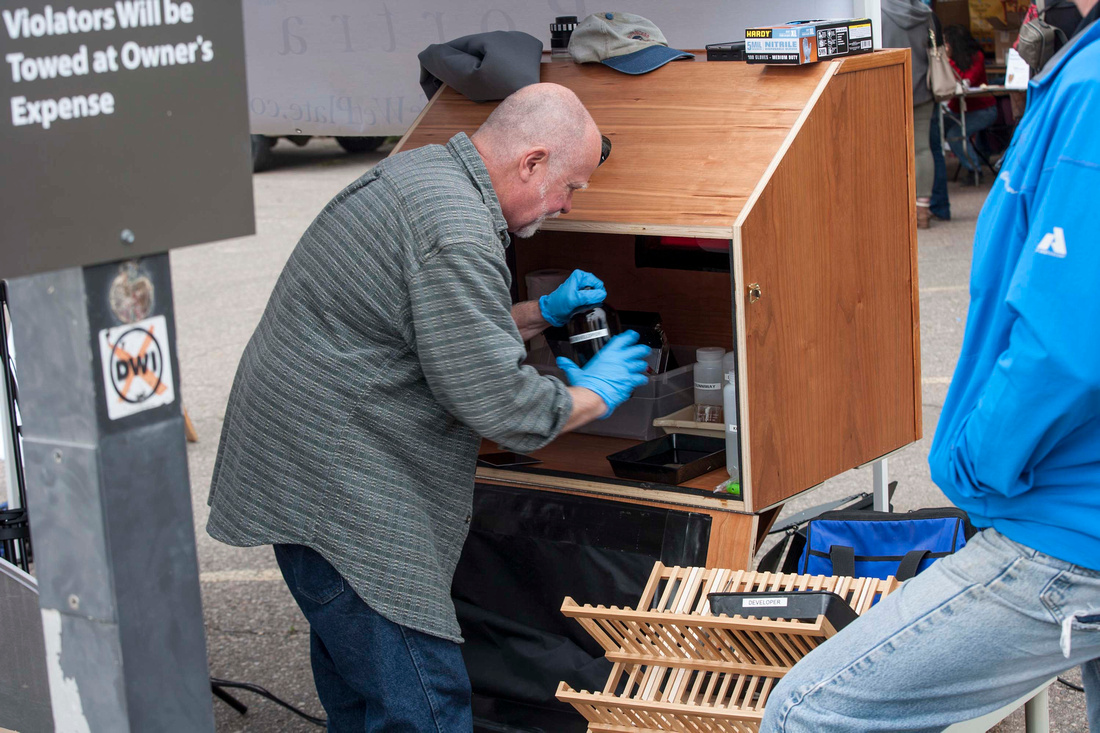 Keven getting the chemicals all ready to process a portrait. 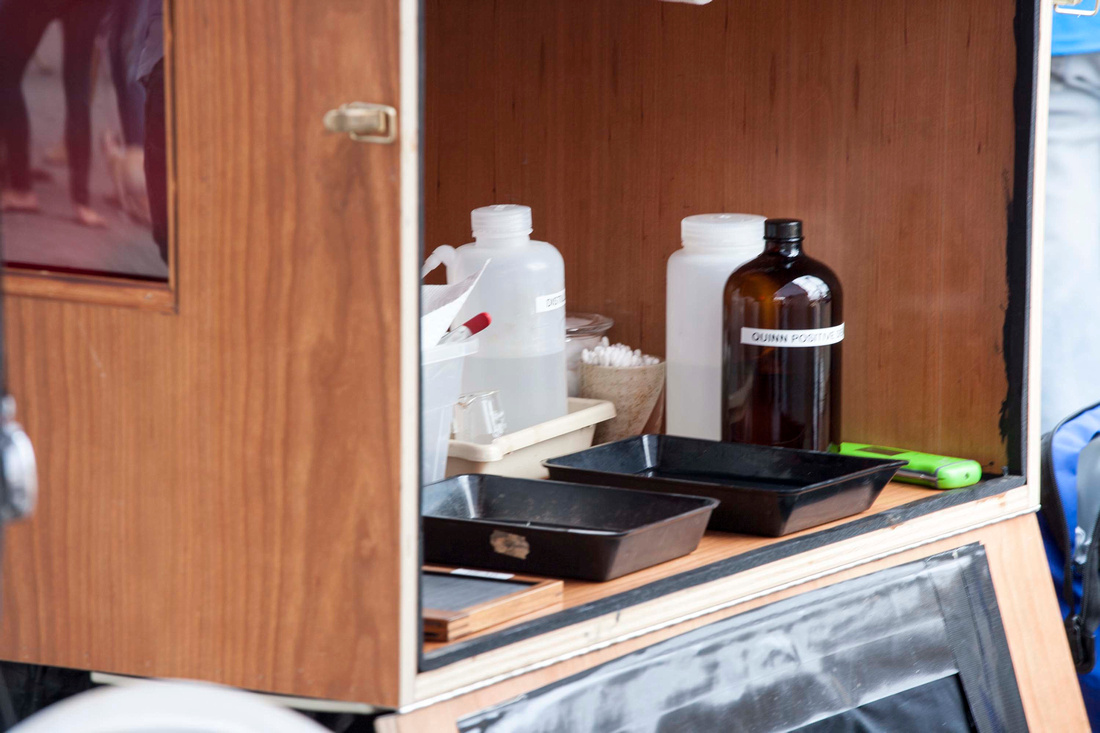 Chemicals in the open portable darkroom. 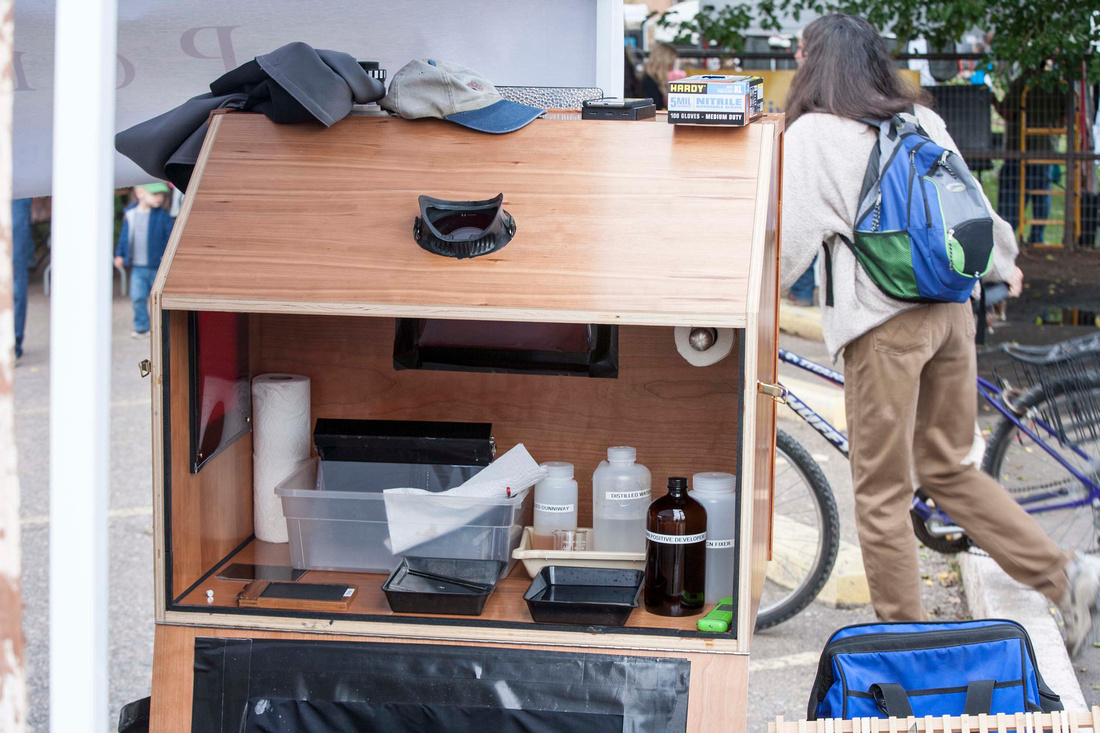 Portable darkroom. The black container sitting at an angle next to the paper towels has the silver nitrate solution. 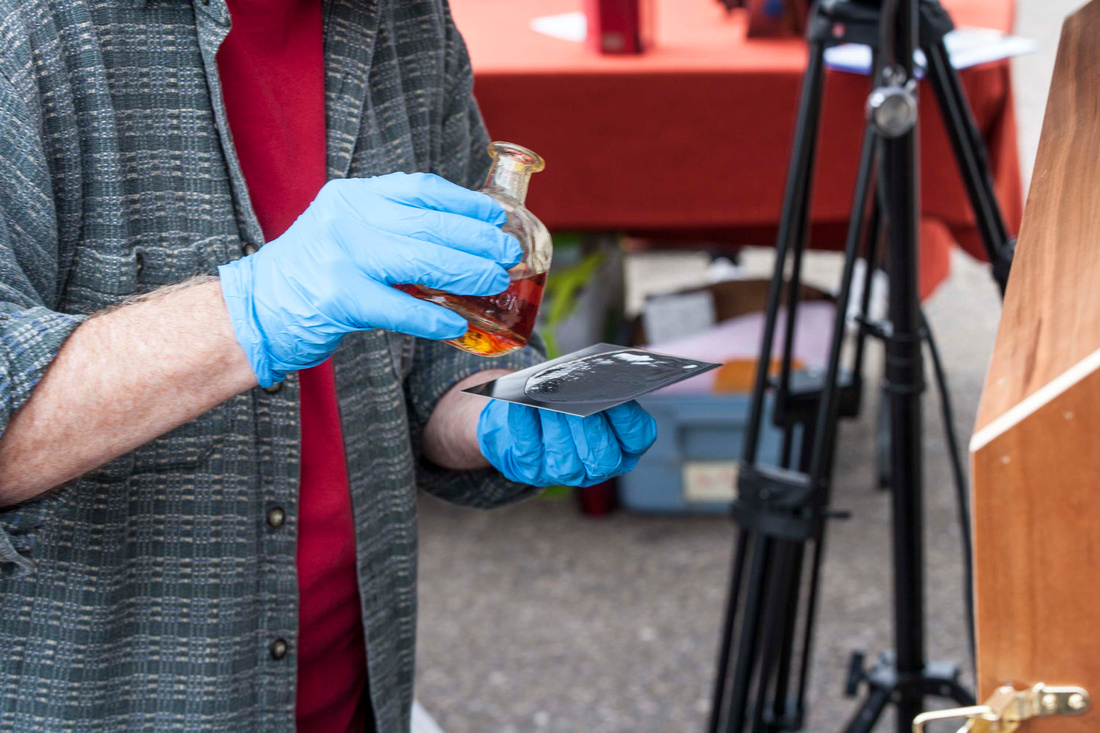 To sensitize the plate, Kevin pours a little bit of the collodion on the black side of an aluminum plate. 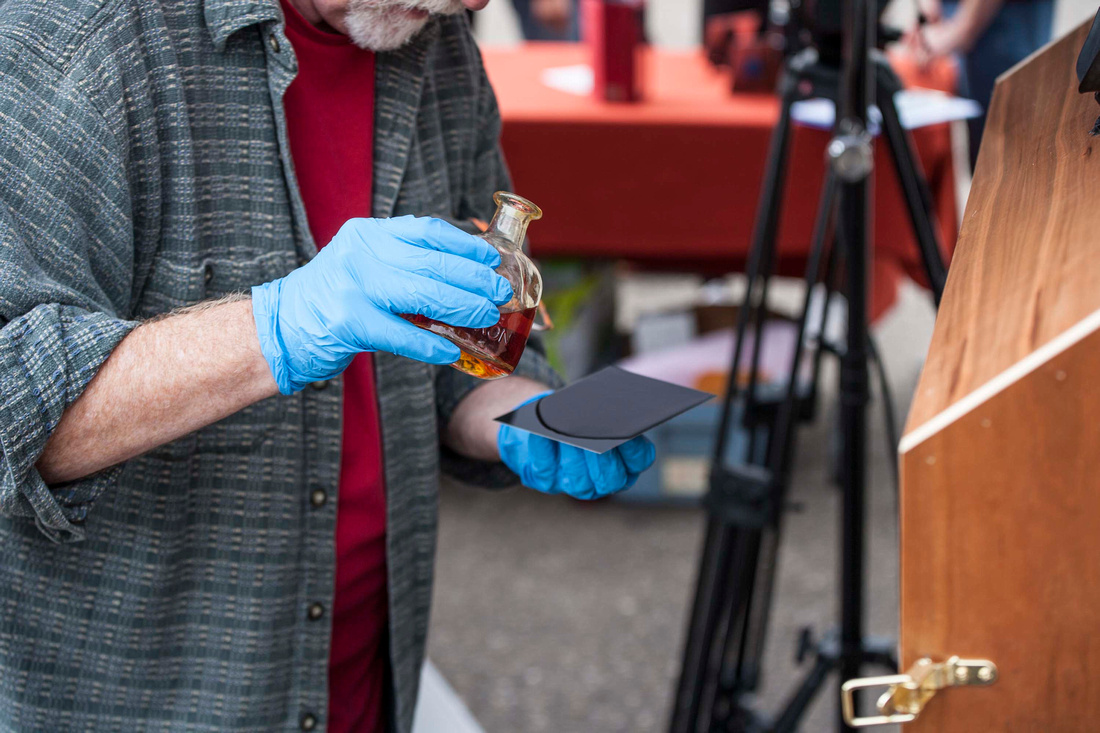 He moves the plate around to get the collodion to spread evenly. 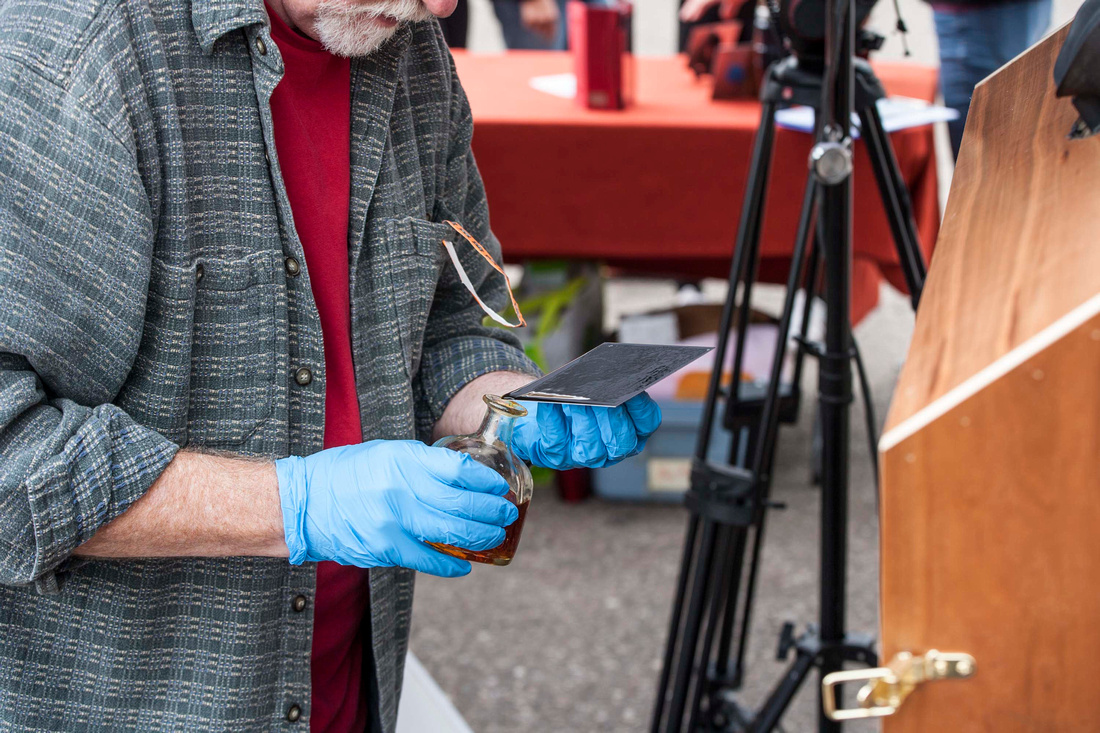 Once the solution is spread evenly and starts to get tacky, he pours off the excess solution back into the bottle. 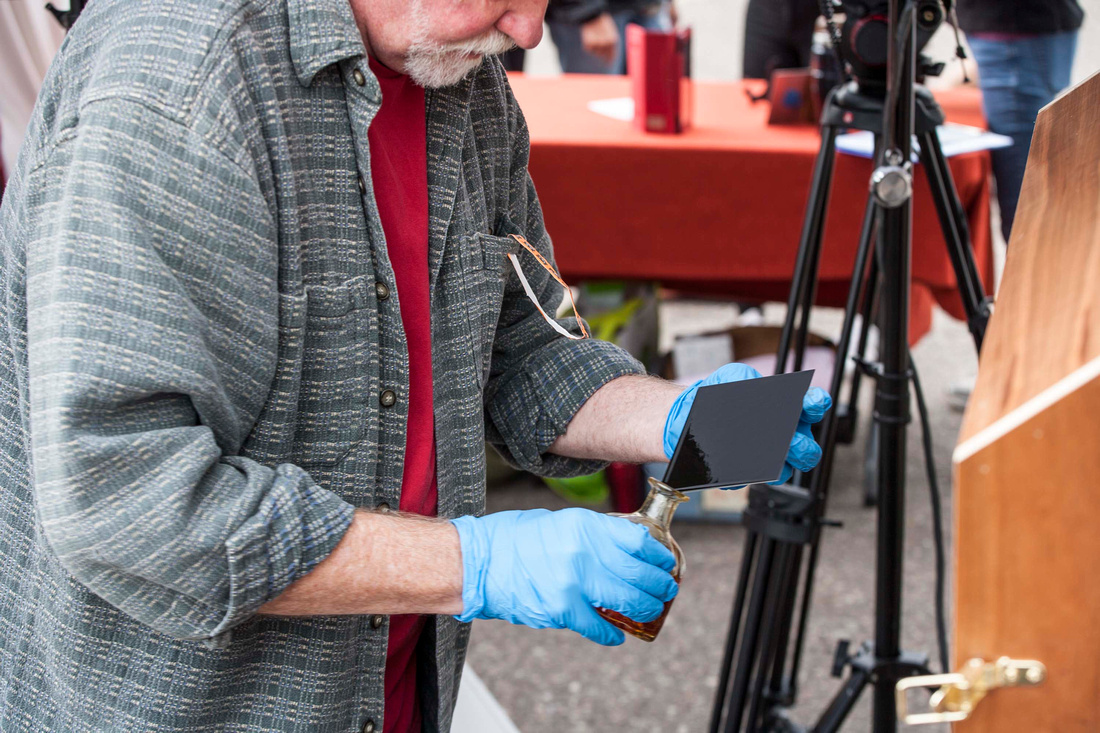 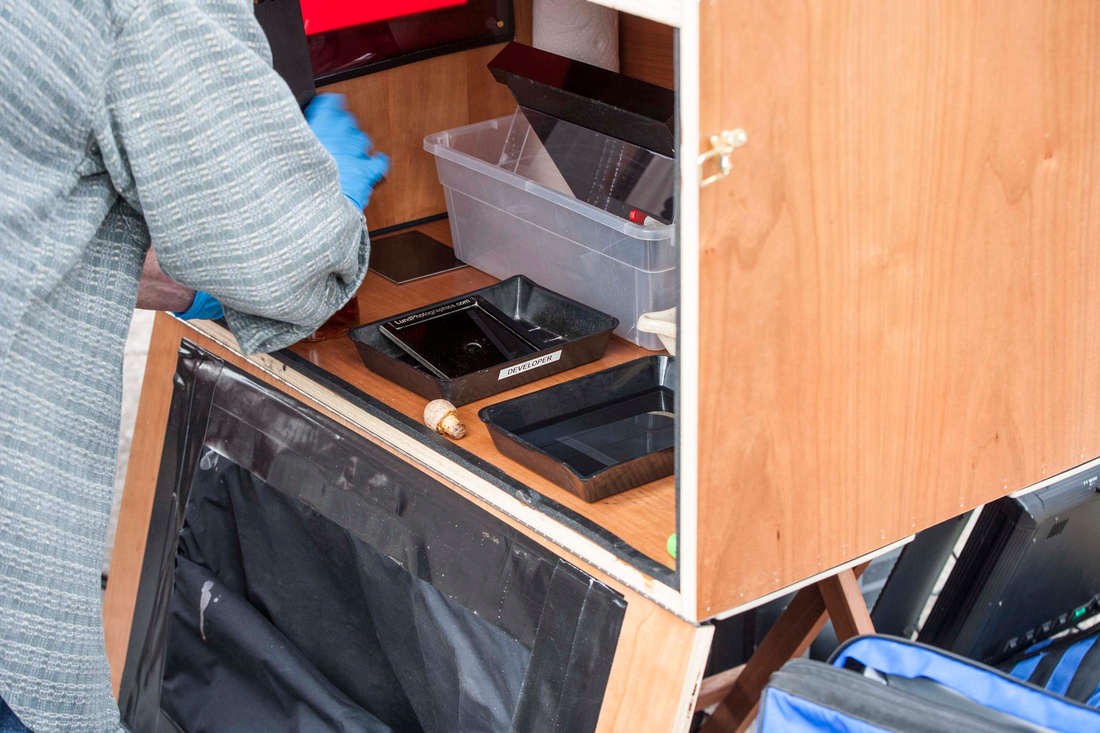 He put the tacky plate in the silver nitrate bath, and prepared the plate holder for the plate. 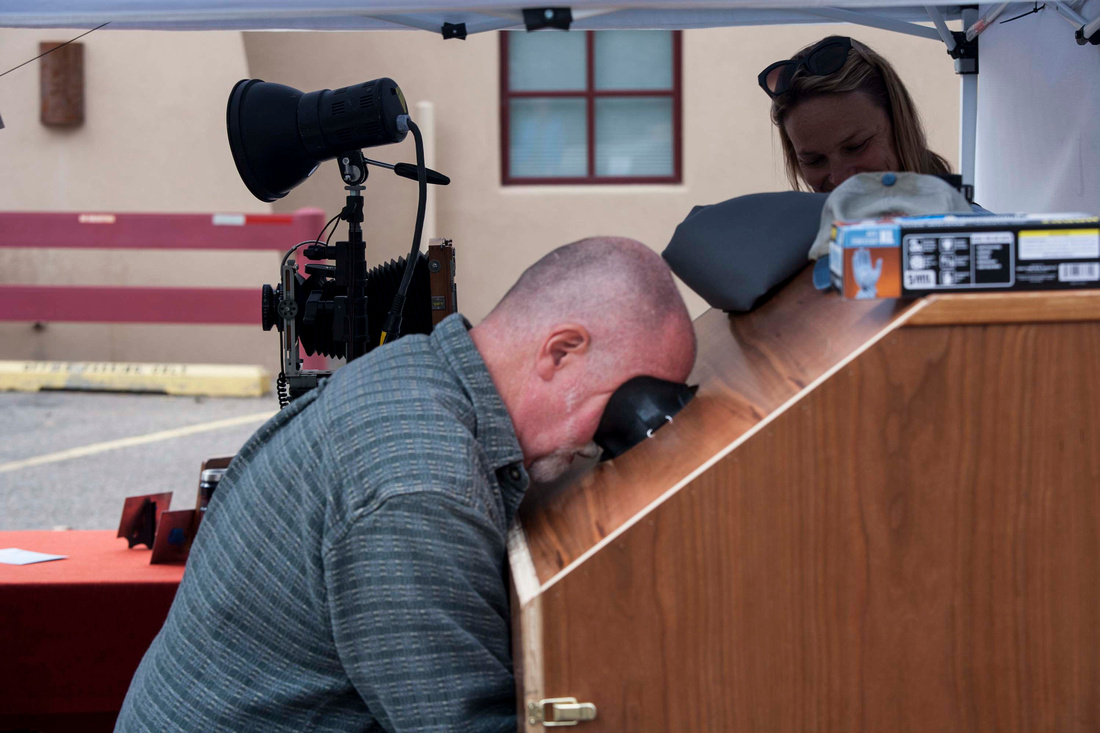 Using a peephole in the darkroom, which has red light filtering into it, he removes the sensitized plate from the silver nitrate solution, and loads the plate into the plate holder. 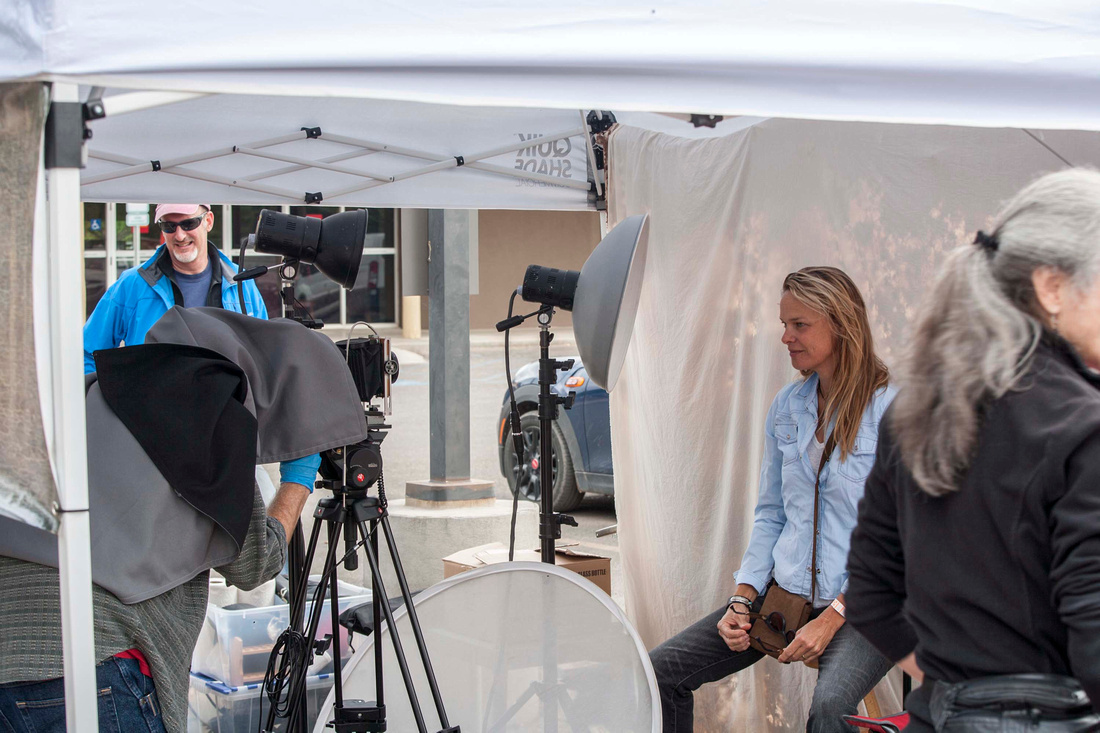 Once the plate is secured in the plate holder, he poses his subject, and focuses the camera on her. 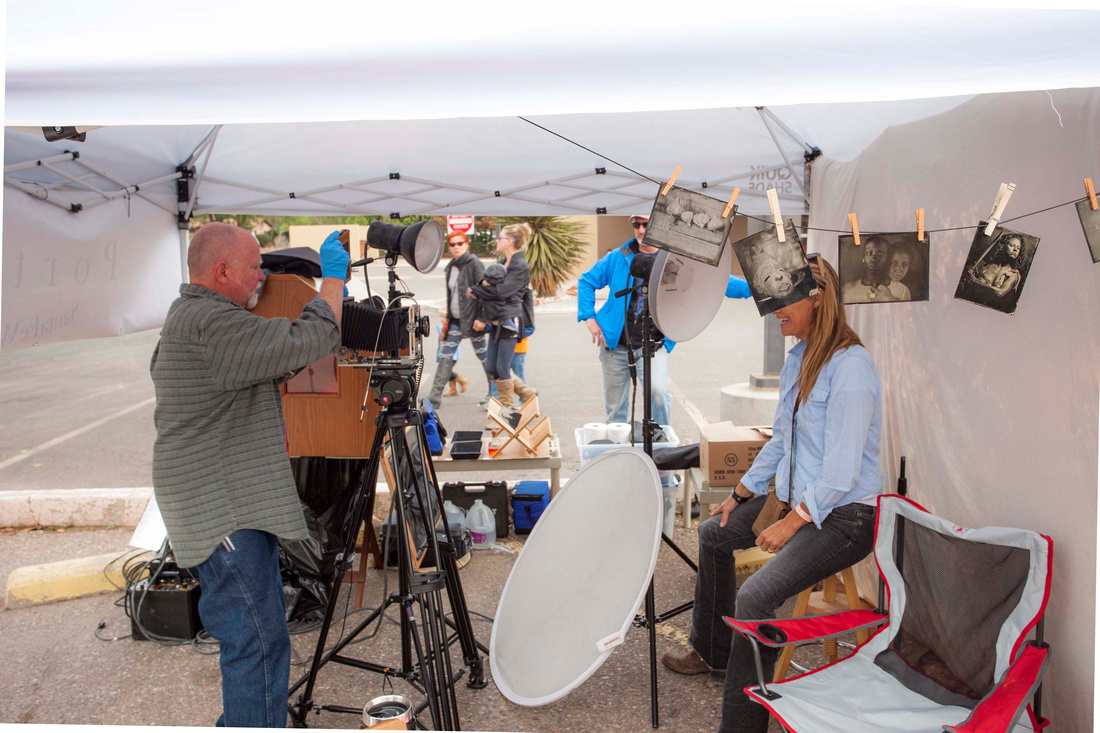 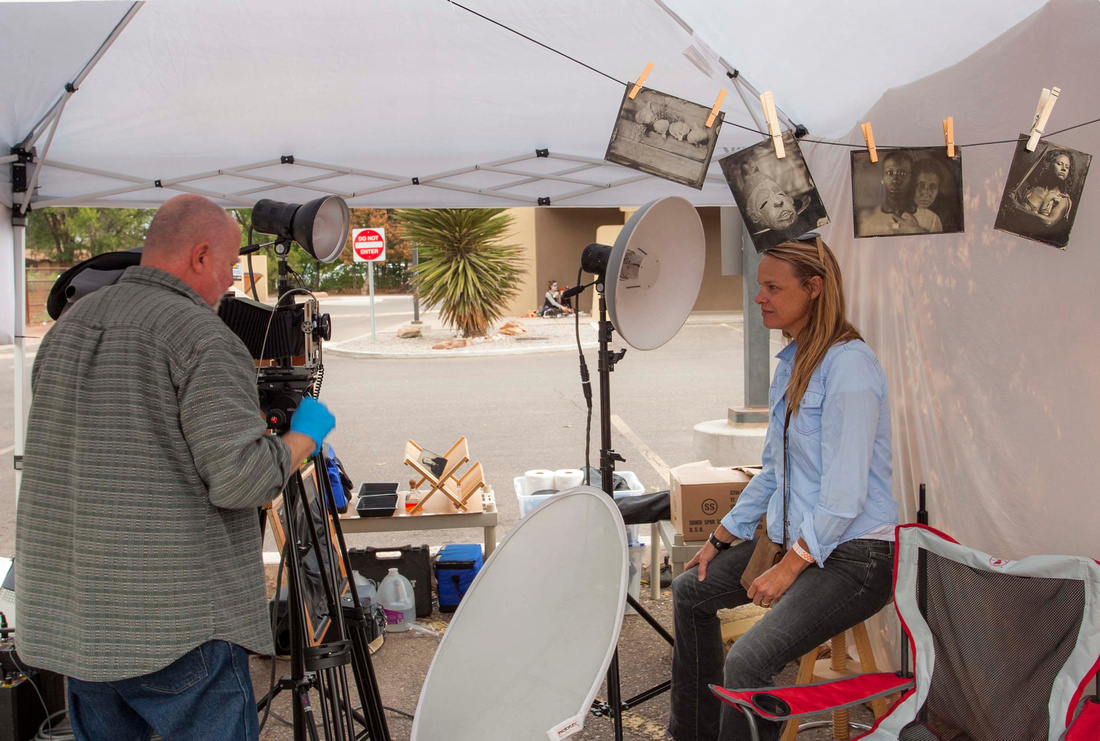 He gets ready to make the exposure. 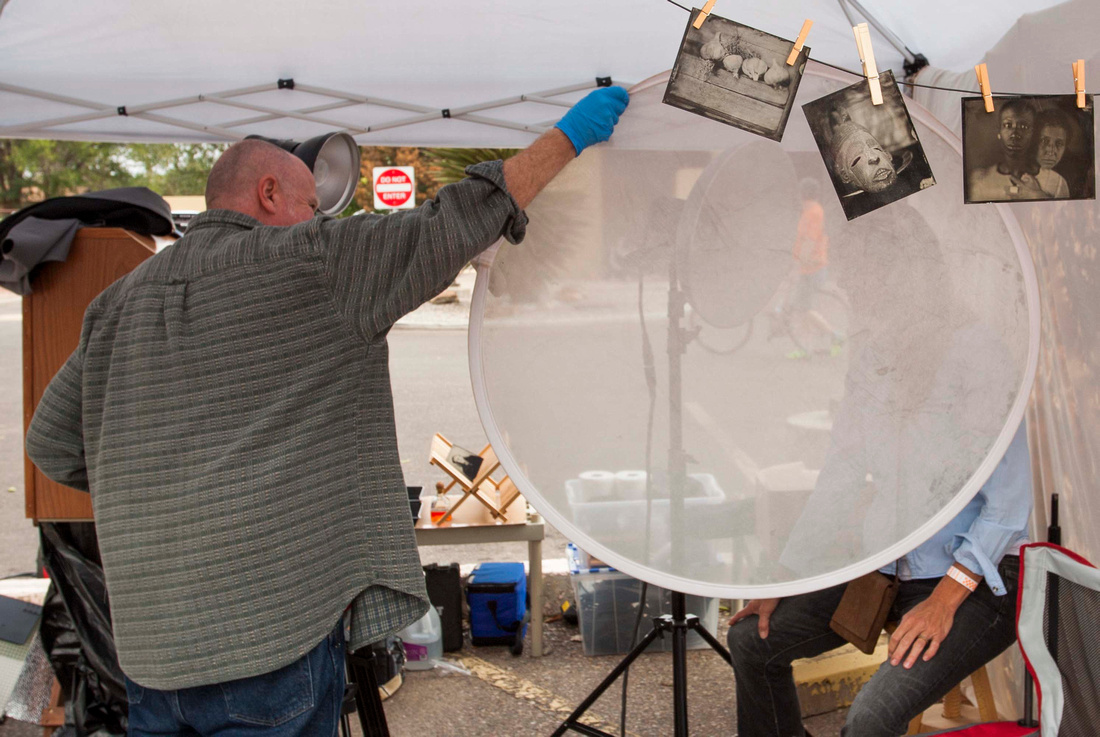 He holds up the reflector and makes the exposure. 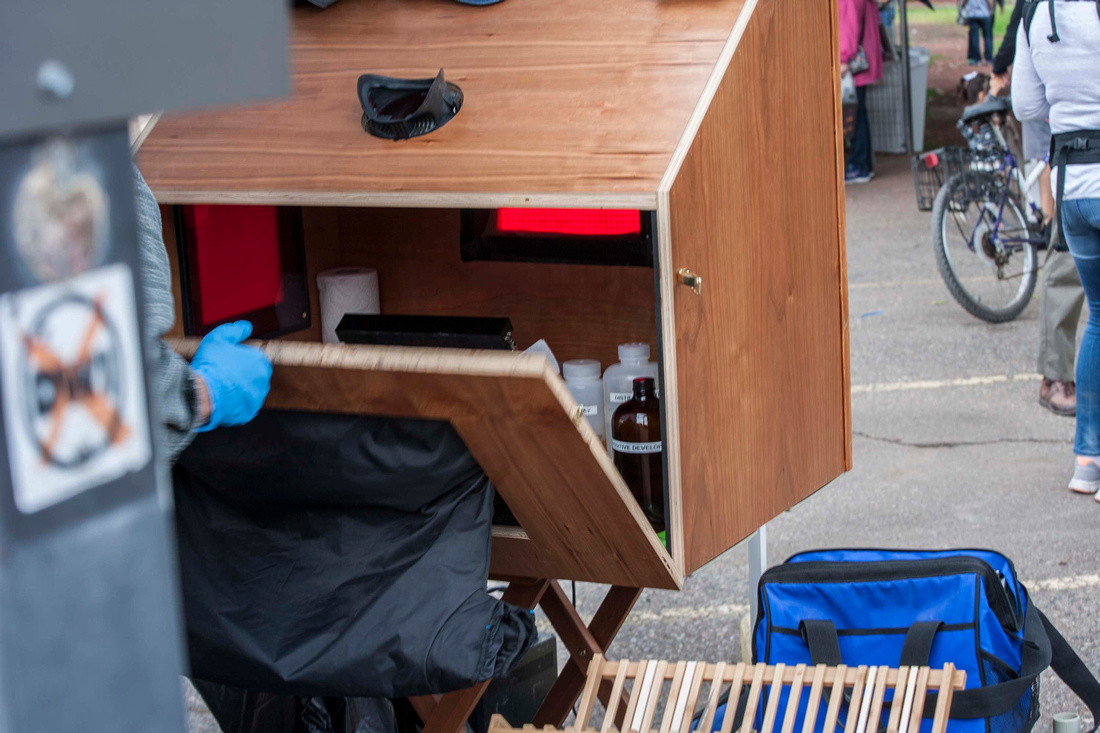 After the plate was exposed, Kevin replaced the dark slide, removed the plate holder from the camera, and placed it in the darkroom so he could process the plate. 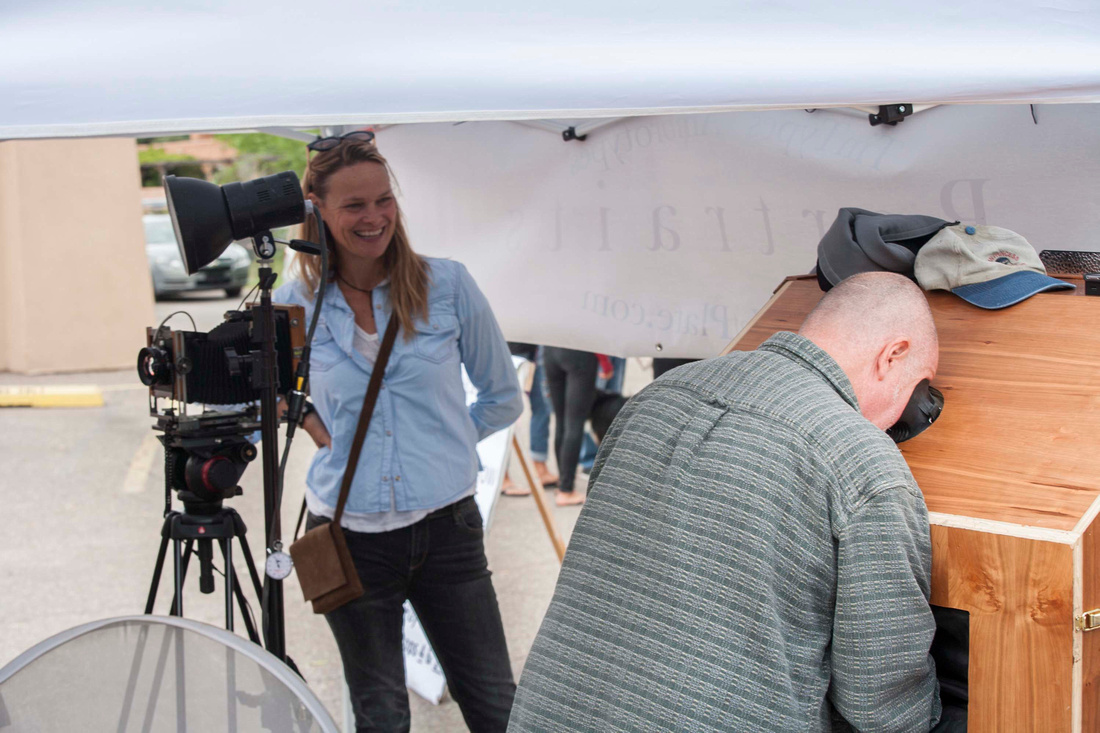 He processed they plate by pouring pyrogallic acid over it, and placed the plate in a fixing solution. 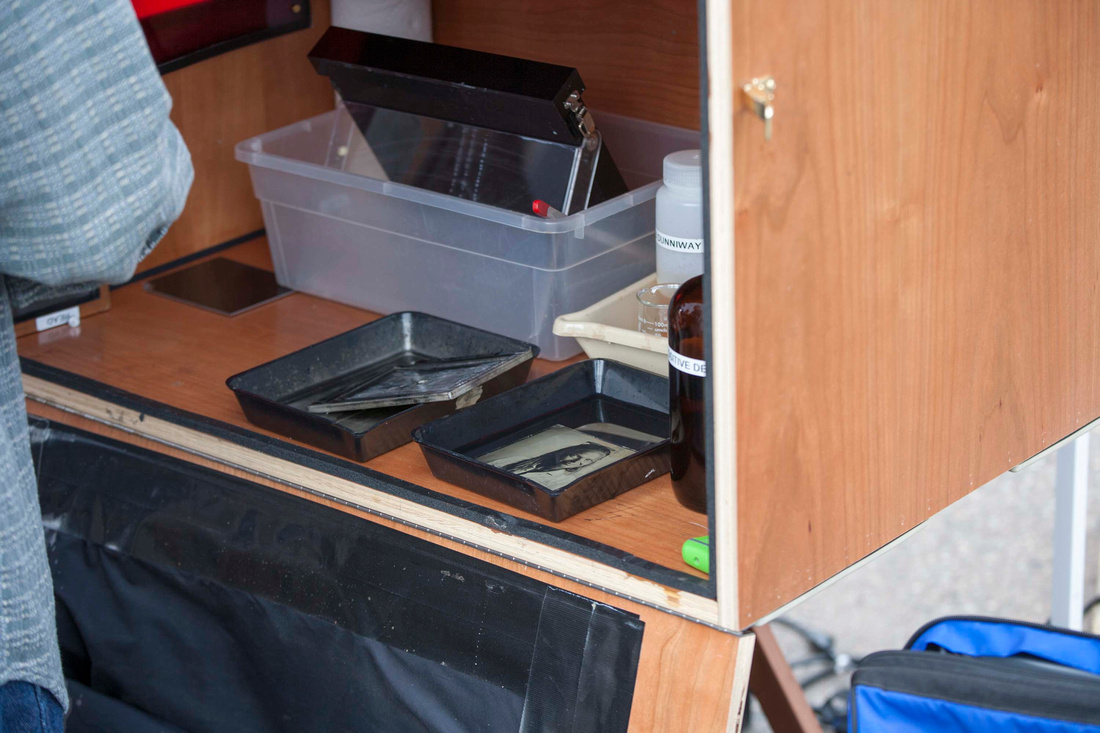 After the plate was in the fixer for a few minutes, Kevin opened up the darkroom to reveal the plate with the portrait of the woman. 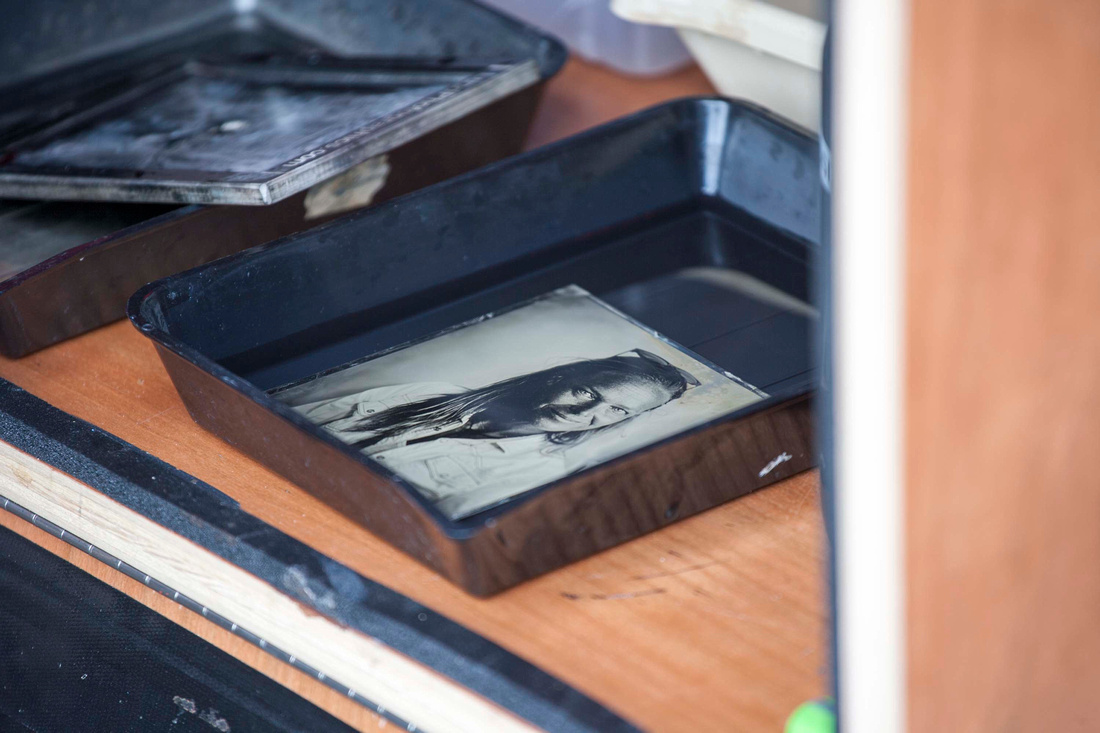 After the plate is fixed, washed and dried, Kevin varnishes the surface to make the surface more durable and scratch resistant.

T & L Photos
Thanks, Teagan! It was really fun to watch Kevin work through the process. We are used to instant images, but people must have thought the whole process was wizardry in the 1850's. Although, it always seems like magic to get images from cameras no matter how it's done.
T & L Photos
Thanks, Christine. I was so happy to find Kevin doing the collodion process.
Teagan R Geneviene(non-registered)
Fascinating to see the step by step, Tim. Have a thriving Thursday!
Christine Robinson(non-registered)
Tim, this is a unique process. I'd never heard of it. Thank you for taking us through the steps of the photographer. You certainly find and share interesting topics. Christine
T & L Photos
Thanks, Susan. Always need to seek variety in life to keep life going.
No comments posted.
Loading...
Subscribe
RSS
Recent Posts
Last Post on Zenfolio Walk, Run, Splash, Fly A Walk in the Snow We Wish You a Merry Catmas Cranes, Train & A Full Moon on Winter Solstice I Had A Dream Shrink Wrapped Fly Away Fire & Phantasm First Snow on the 2nd
Archive
January February March April May June July August September October November December
Timothy Price
Powered by ZENFOLIO User Agreement
Cancel
Continue