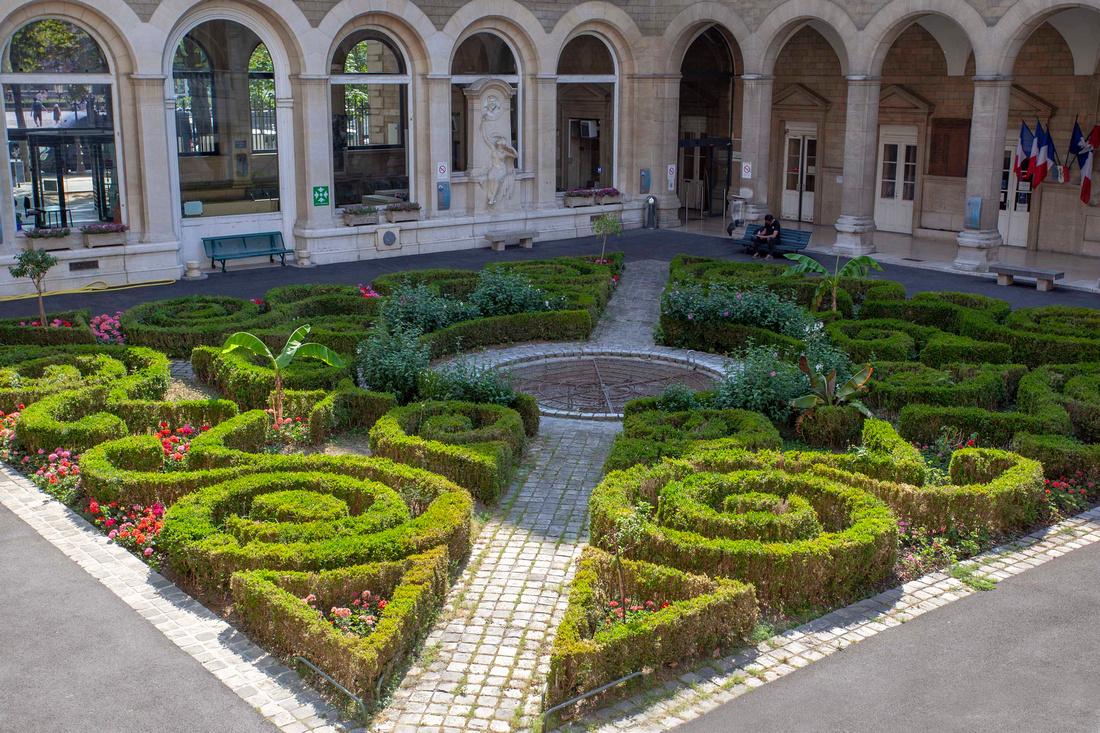 The labyrinth garden you encounter when you walk into the courtyard foreshadows what you will experience in the building.

While our trip home from Paris was rather uneventful, the trip to Paris was not so easy going. Our flight from Albuquerque to Chicago was an hour and half late arriving to Albuquerque, then it was almost another hour before we were in the air on our way to Chicago. There was a two and a half hour layover in Chicago, which had been pretty much eaten up with delays by the time we were airborne. Not long after we took off, the pilot announced that he had figured out a shortcut to Chicago, which might get us there in time to catch the flight to Paris. Our plane arrived at the gate at the time the flight to Paris was scheduled to take off, but since several passengers on our flight were going to Paris, they held the plane, and a group of us had to make the long run under the runway to the next terminal to board the plane to Paris. Our flight to Paris finally got off only 45 minutes late.

We arrived in Paris pretty close to the scheduled arrival time about 9:45 am. We got through immigration, collected our bags and started trying to figure out where to find our prepaid shuttle. As soon as I got off the plane, my phone buzzed with a message that I was on the Orange network and under the T-Mobile agreement I had unlimited data and texting and 20¢ a minute for voice. I expected Laurie's phone to get the same message, but we never got her phone to connect to a carrier so she had no service unless she was connected to WIFI. Once I got both phones connected to WIFI I found an email with instructions for the shuttle, which were not very clear. It said to be on the sidewalk with our luggage outside door 45. We were standing in front of door 45, but it was locked and we saw no way to get outside. Then I got some more instruction that said to be by door 32. We were directed to go downstairs and outside to get to door 32. Once we were outside at door 32, another person said no you have to be inside by door 45. We tried to get back inside but the doors would not open. A group of pilots were standing outside one door, and I asked them how to get inside. They said the airport was locked down for a security check. While we had been running around trying to figure things out, there had been several announcements asking the owner of a black suitcase to pick it up. They apparently locked down the airport because of that abandoned suitcase.

They finally reopened the airport, and the shuttle driver found us. We were the second of three couples he was picking up. After we got in the van, he headed over to another terminal to pick up the last two passengers. On the way, one of the gates would not open, blocking his access to the terminal. He drove off through the exit lane for cars not allowed to pass through the gates, made another lap, got up to the gates and they still would not open. Several taxi drivers behind us were honking and yelling, and finally four other drivers came up and they were all yelling into the microphone in the control box for someone to open the gate. Finally a tech came out, opened the control box and the gate opened and our driver and the taxis were able to get through.

We were dropped off at the hospital that our hotel is in about 1:30 pm. We went inside and the hospital's security guard gave us vague instructions about how to find the hotel (thinking about it later, he probably only had a vague idea about where the hotel is in that giant building). We started looking for the hotel. The signs for the hotel were very small and not easy to see. We soon discovered that the stairs in each wing did not go the all the floors. When we found the wing with the elevator that would take us up to the hotel, the elevator was out of service. There were vague instructions to go to the last wing and use the elevator on the right, go to the 5th floor and walk back through the hospital wing to the hotel. We did that and got to several dead ends. We went back to the 3rd wing and I carried my bags up the stairs and got to a level that stopped with doors that lead to the balcony outside, two areas that we clearly marked hospital wards, and another set of doors to a hallway that had another staircase in it. I walked up the staircase two more floors to the top of the stairs, through another door and found the hotel. The young man at the desk said we had to go to the 6th floor in the elevator in the last wing and walk back through the hospital. I ran back down the stairs, to where Laurie was waiting, we went up to the 6th floor on the elvator in the last wing, and back through the hospital wing to the hotel. Other than being very difficult to find when their elevator doesn't work, the hotel is wonderful. 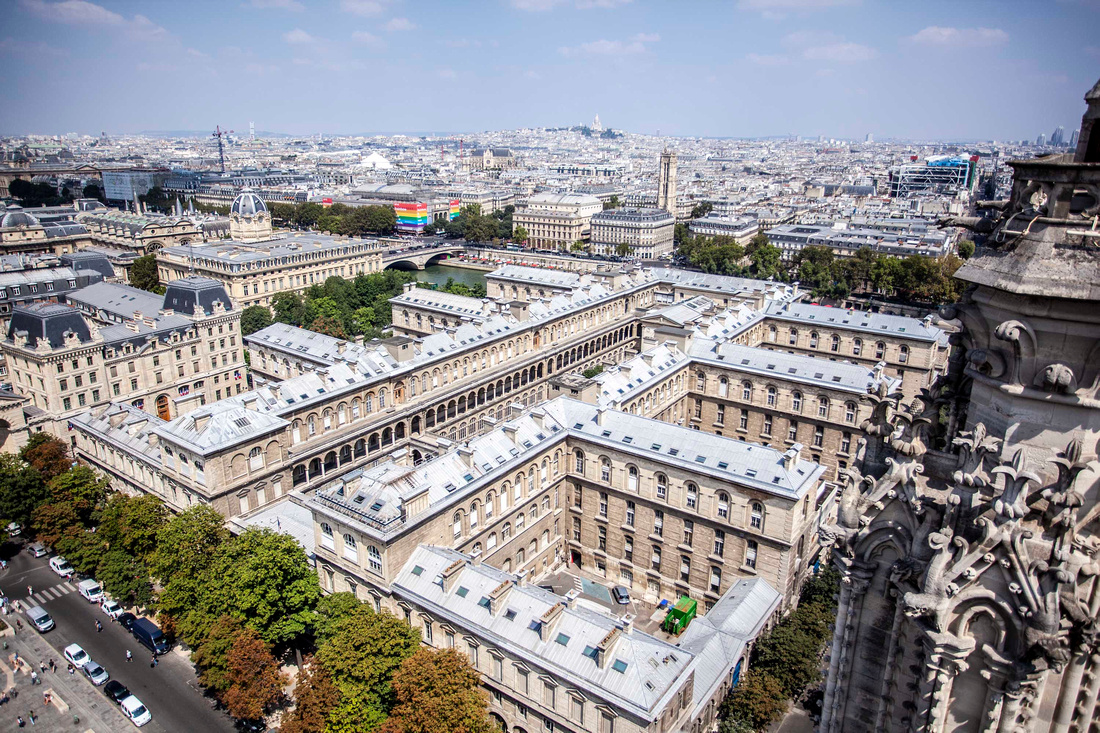 The hospital was rebuilt in 1380 and then remodeled in 1801 to remove the church-like façade. The building takes up around 4 normal-sized city blocks. The skylight by the chimney on end of the third wing on the right side of the photo is the room we stayed in. I took this photo from the tower at Notre Dame. 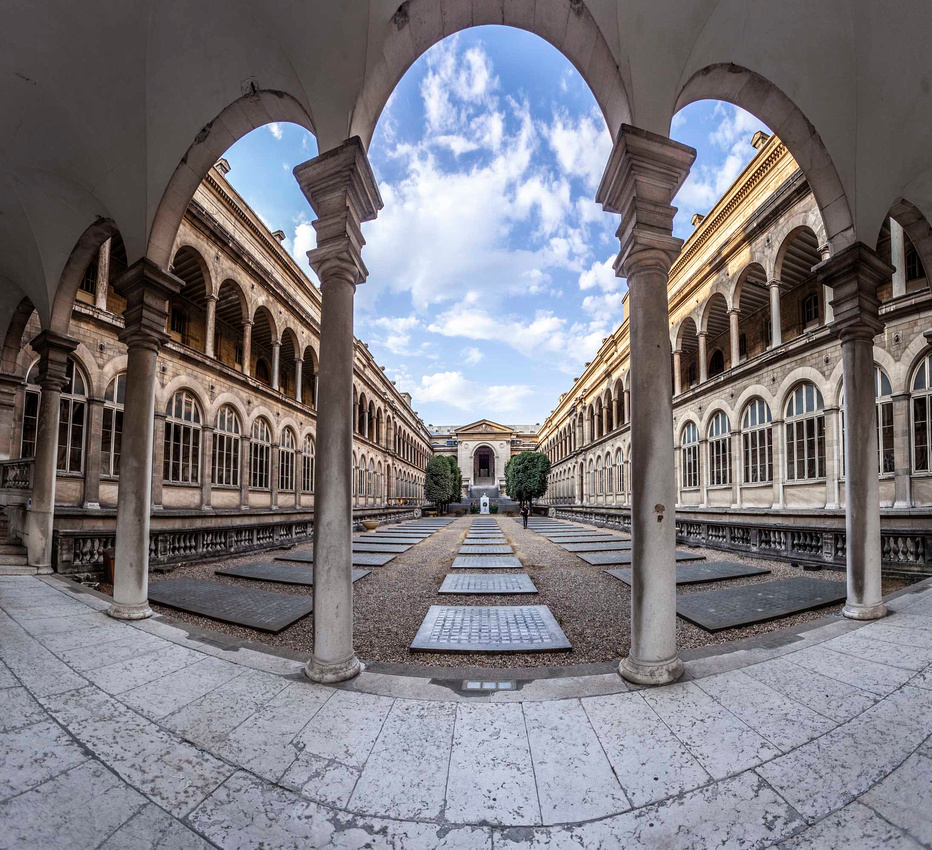 How the building appeared to us as we walked around jet-lagged trying to find the hotel. 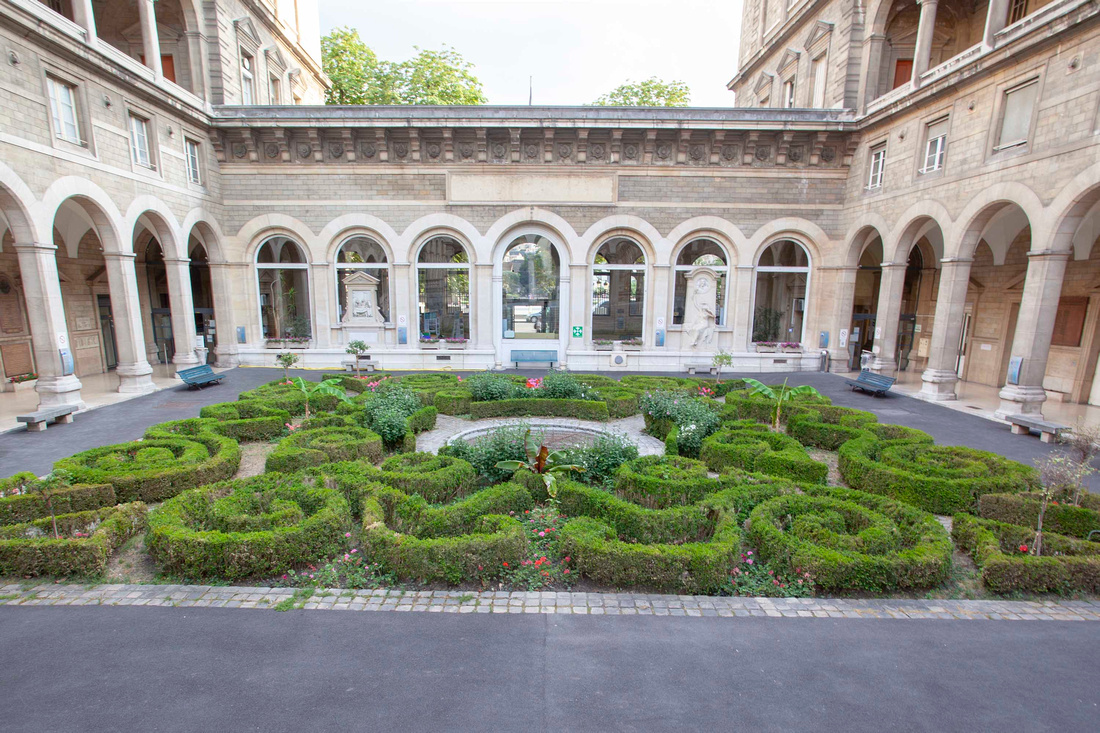 Another view of the labyrinth garden. The corridor that leads to each of the wings. 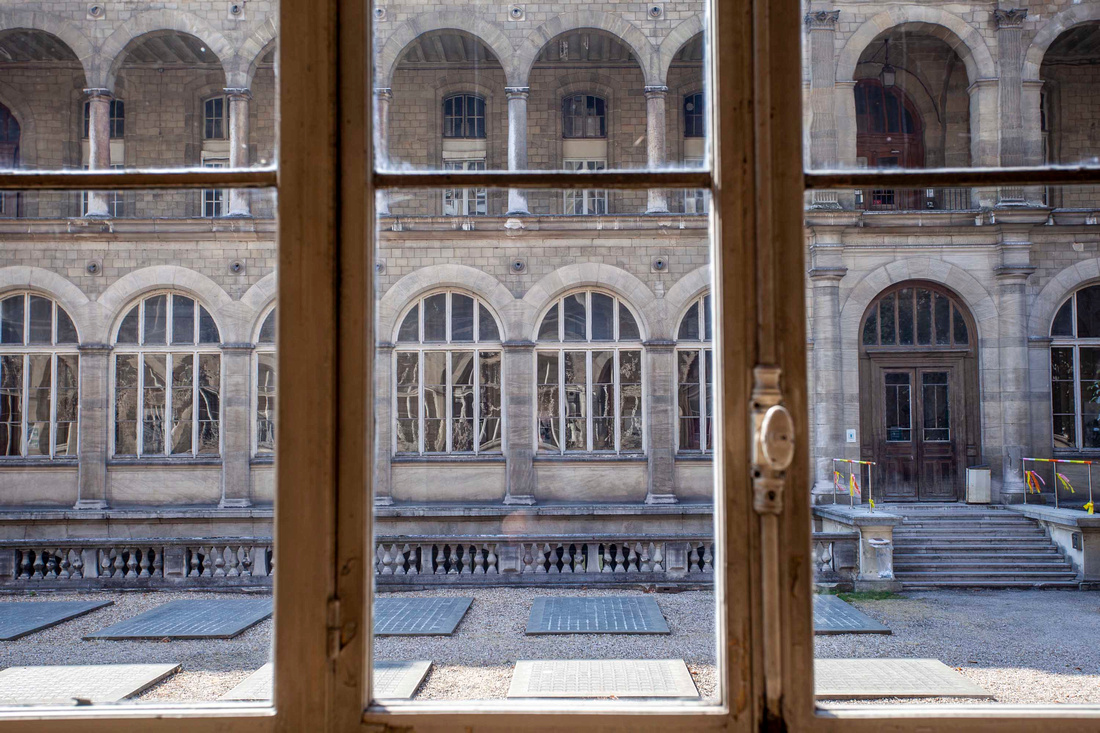 Looking through the hand blown, imperfect glass and the west side of the building. 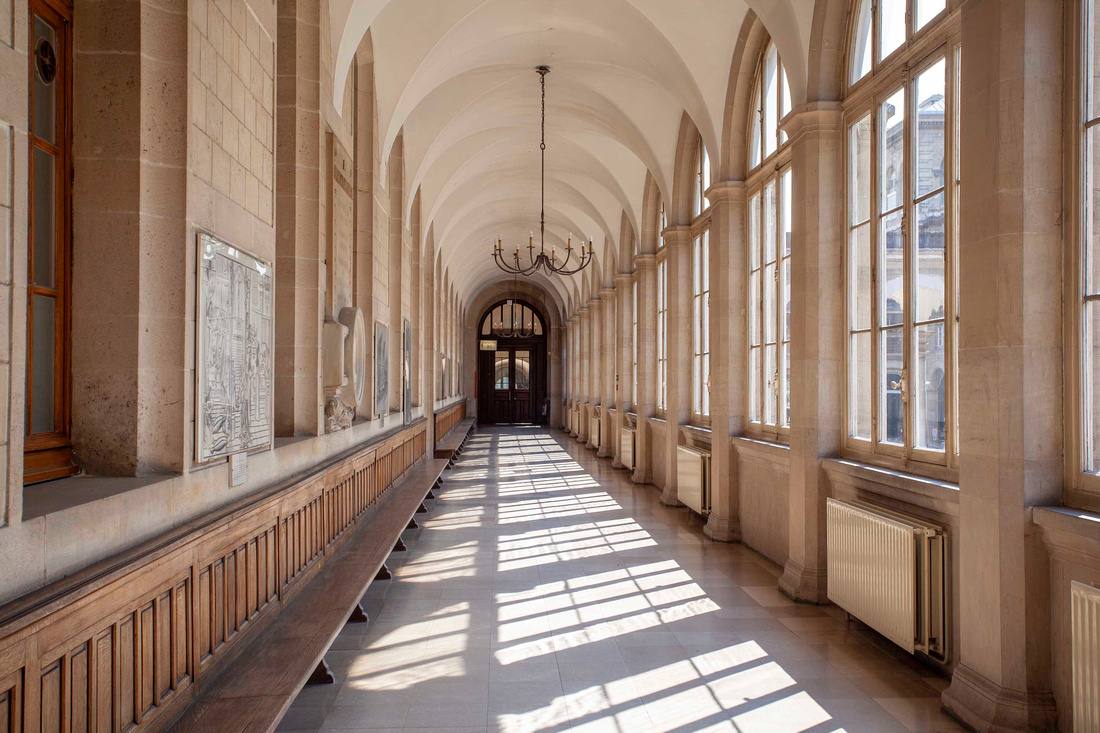 Looking back at the doors where we entered the corridor. 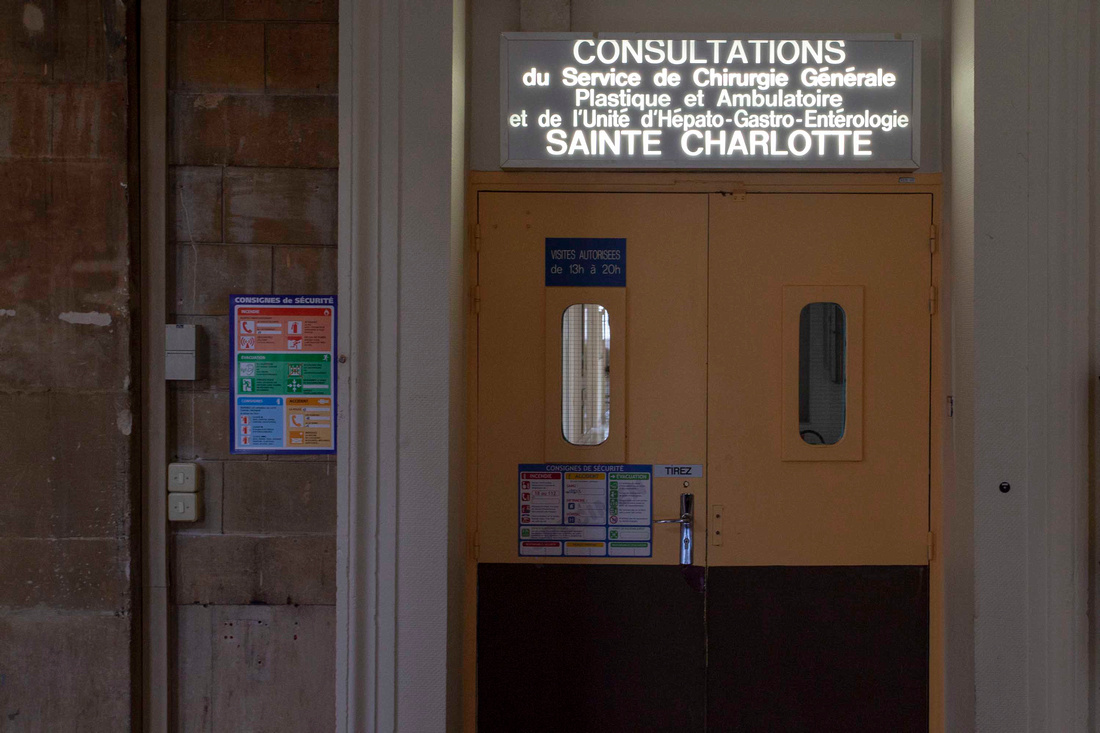 In the entrance to the wing with the stairs and elevators. 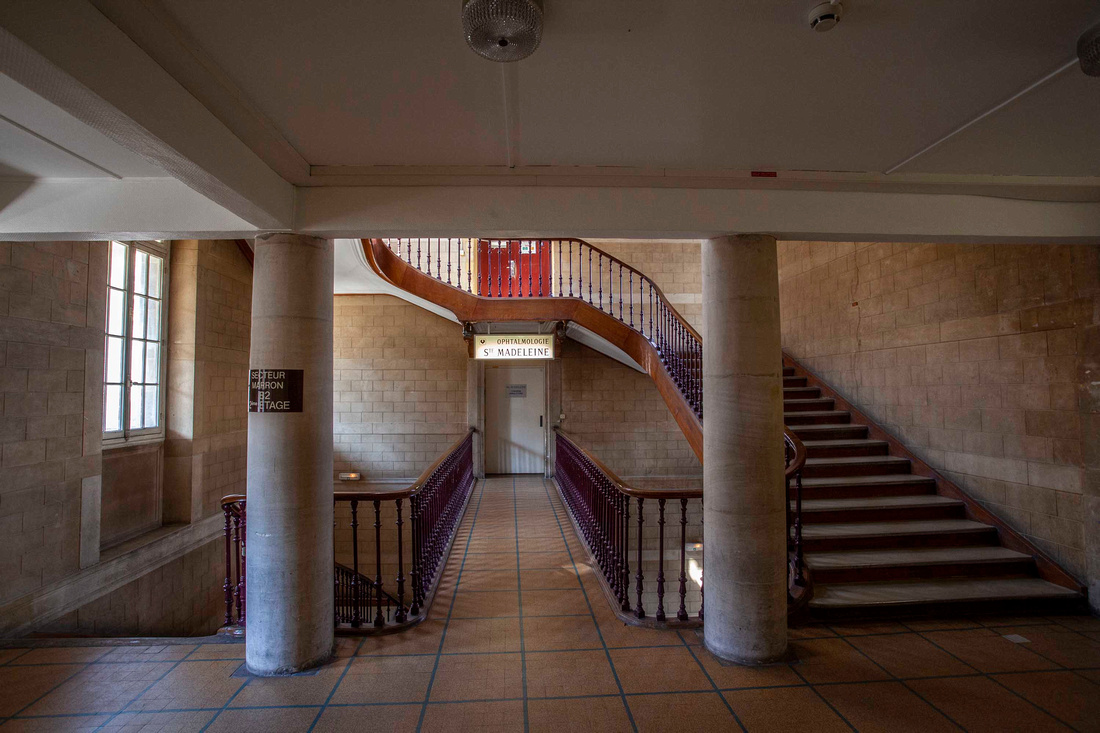 Each wing had a set of stairs like these, but the stairs went to different floors in each wing. 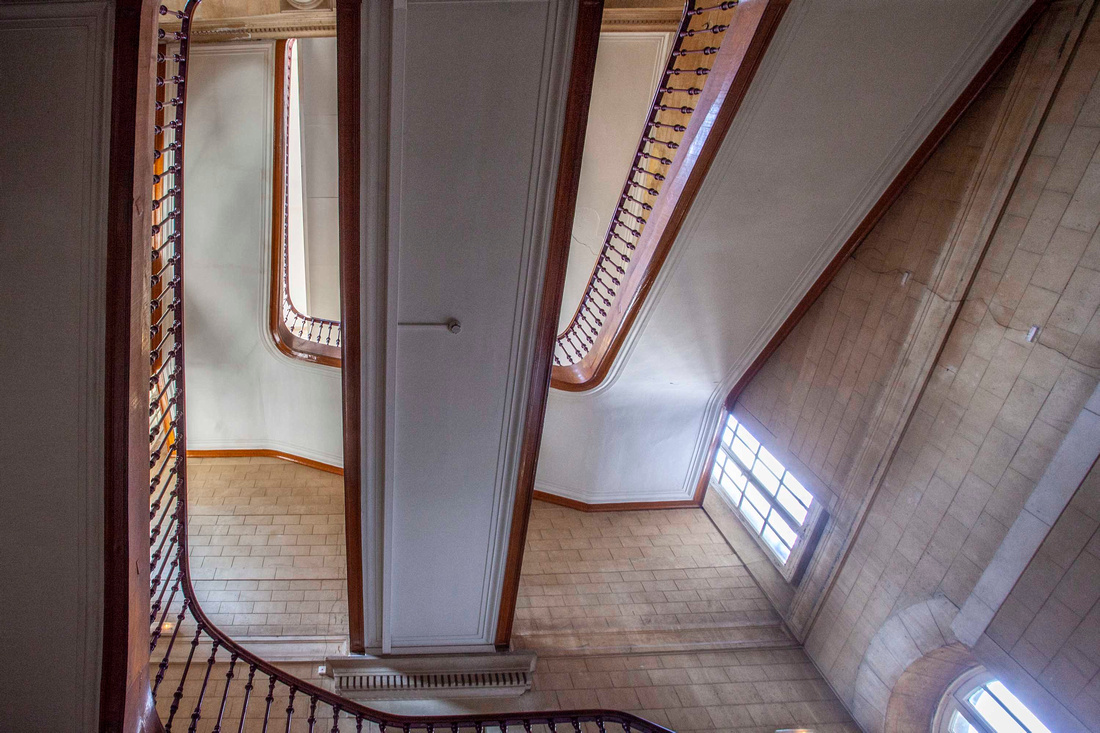 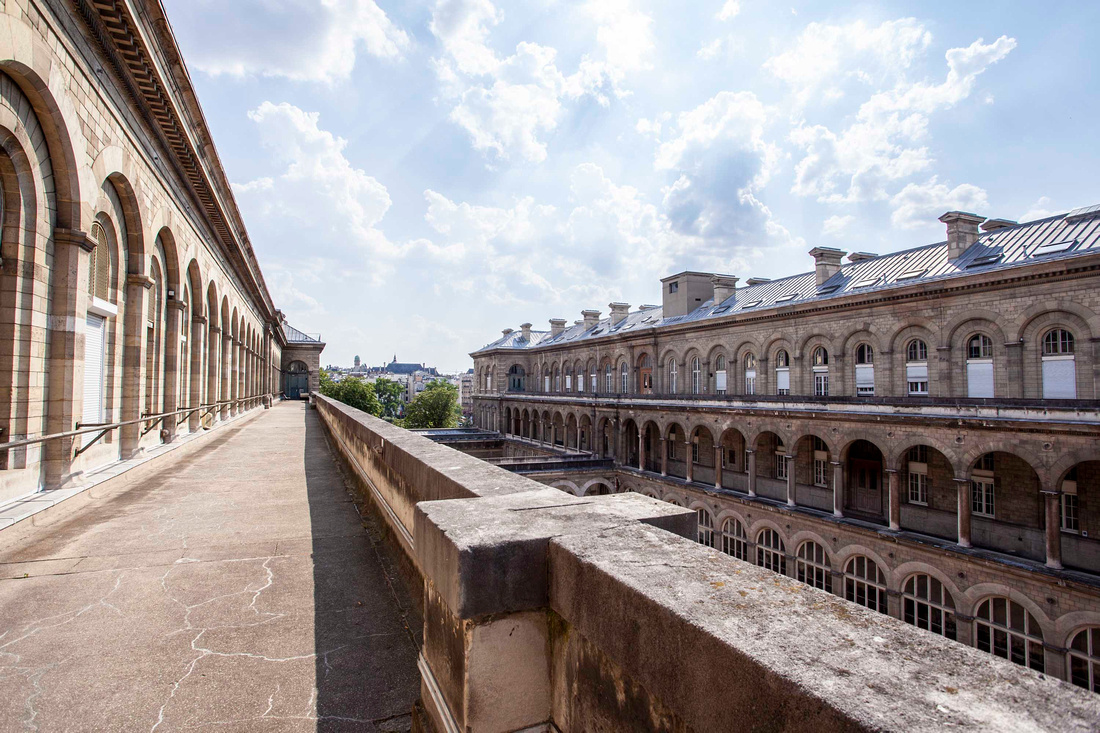 Out on the balcony looking south. 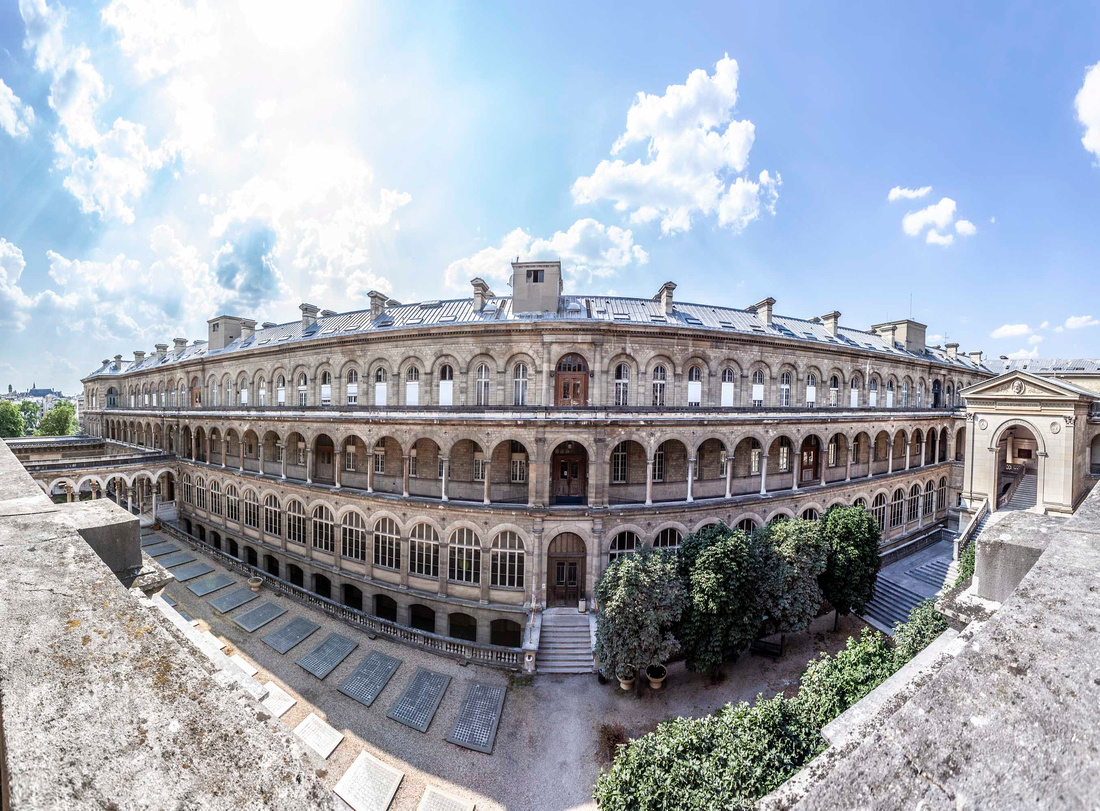 A jet-lagged view of the west side of the building. 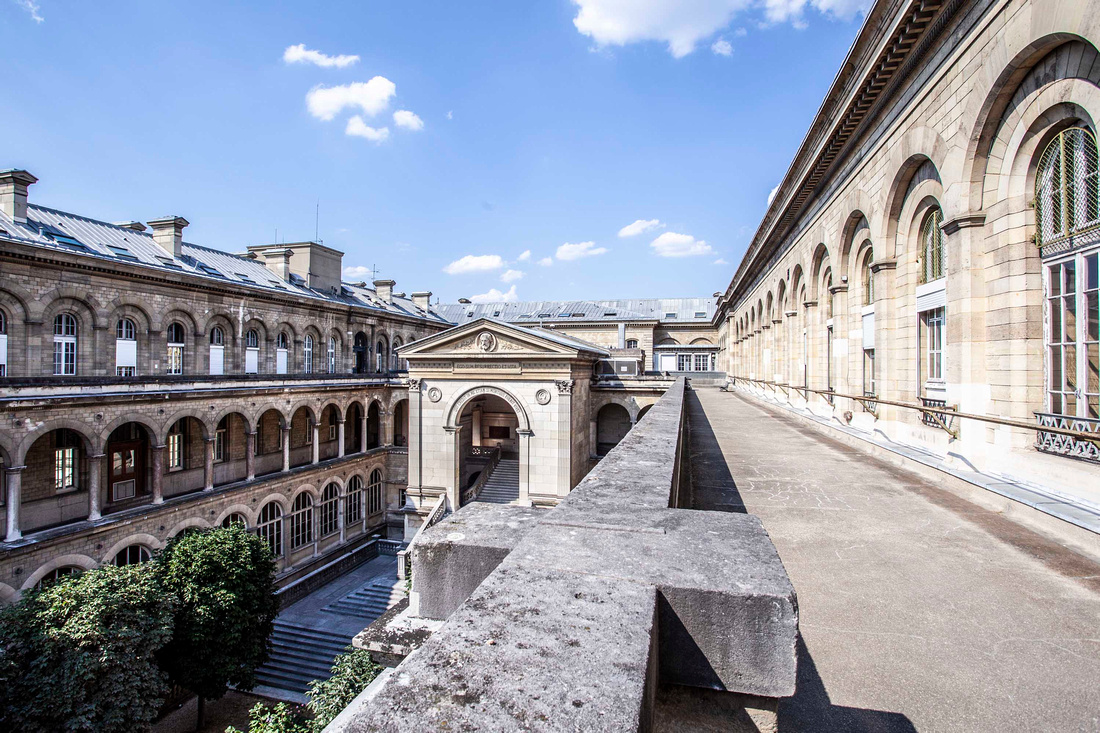 On the balcony looking north. 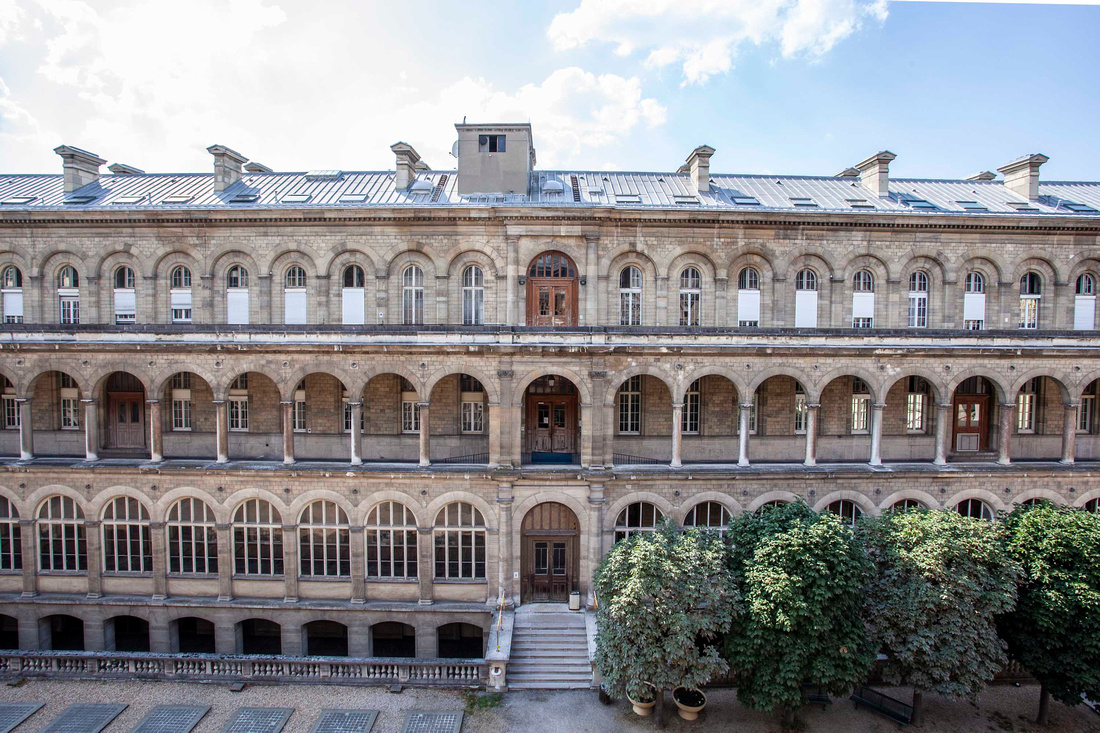 Normal view of the west side of the building. 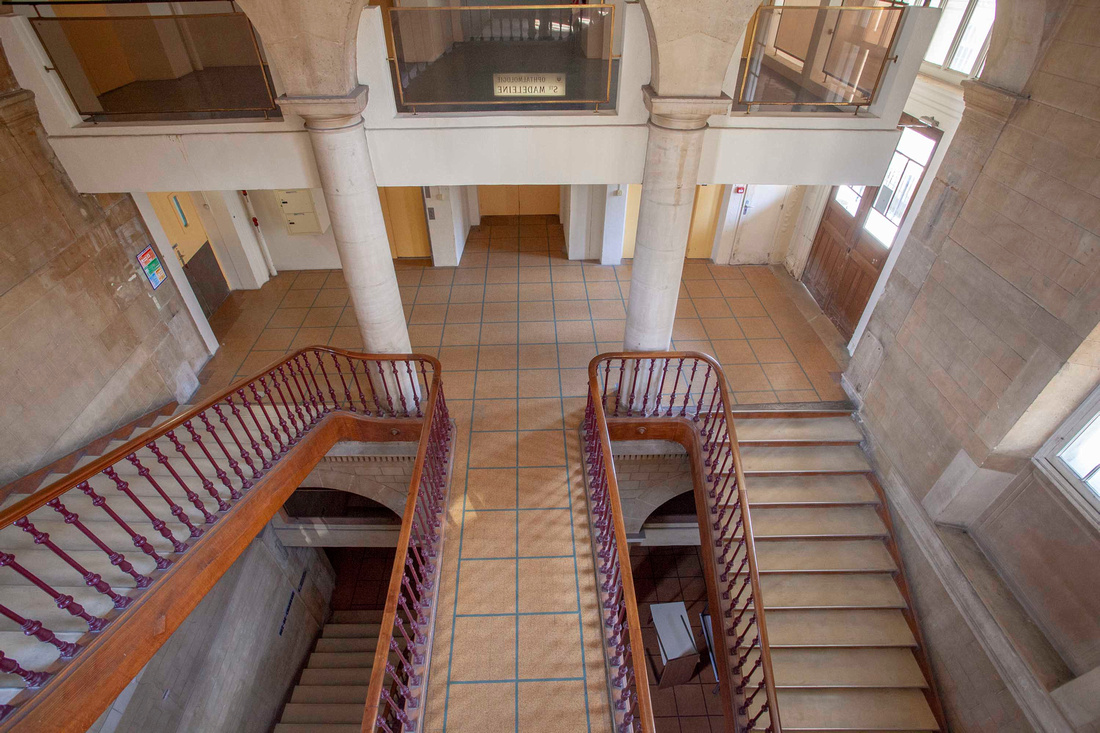 Looking down the stairs. 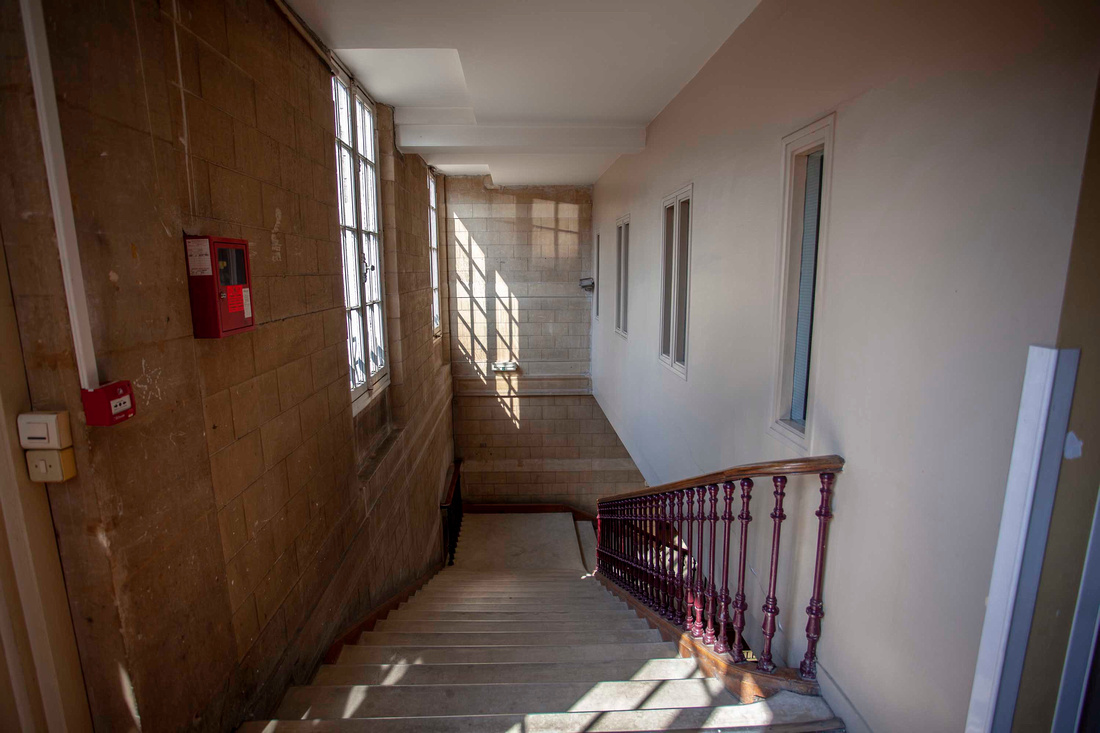 The top of the stairs at the fourth floor landing. 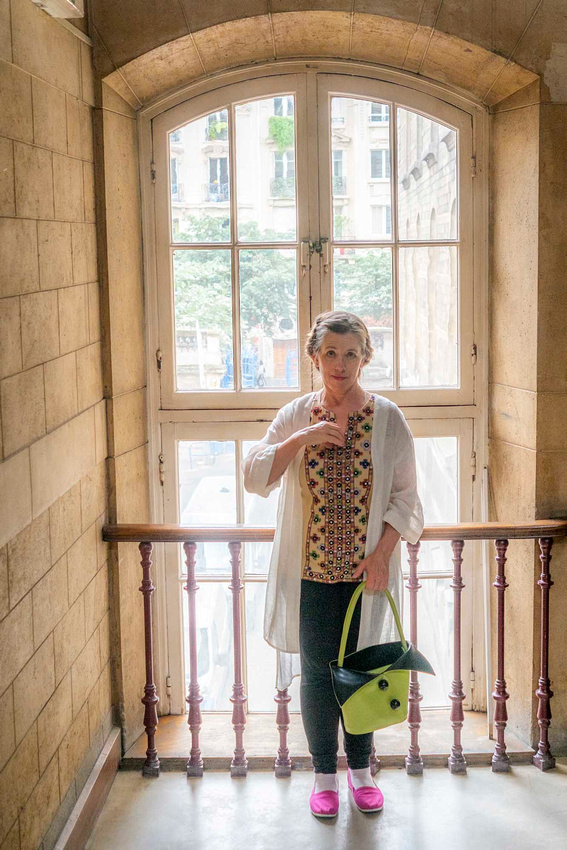 Laurie in front of a third floor window. 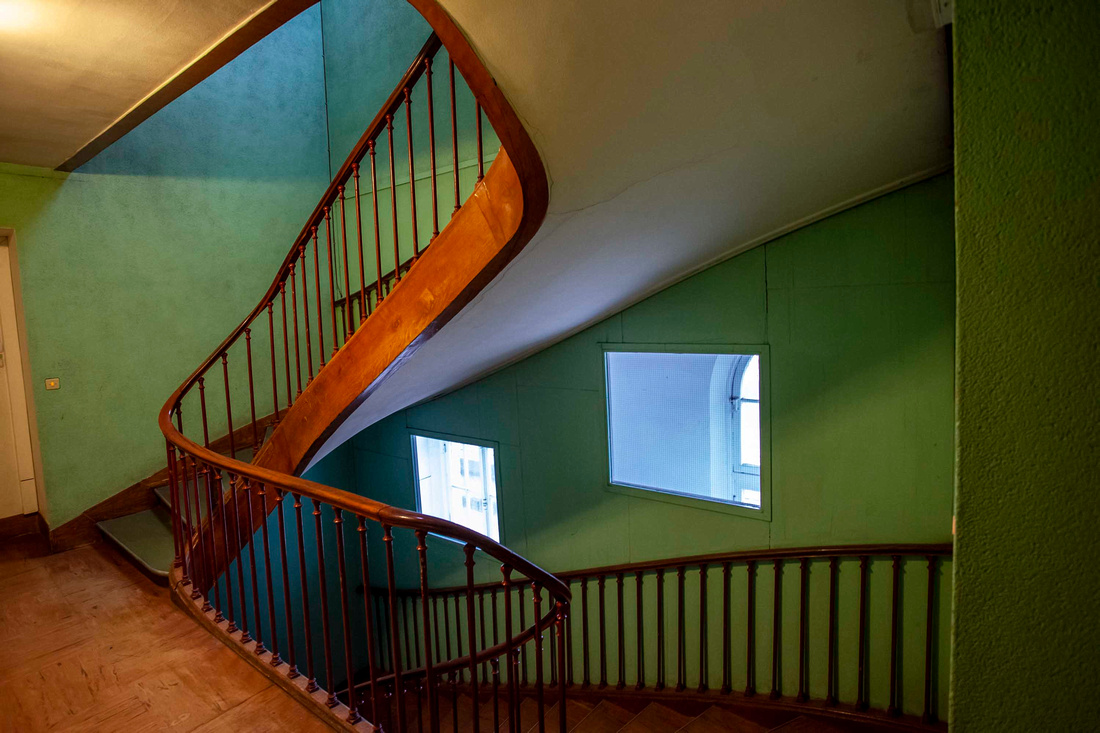 The next set of stairs that were through a set of doors on the fourth floor. 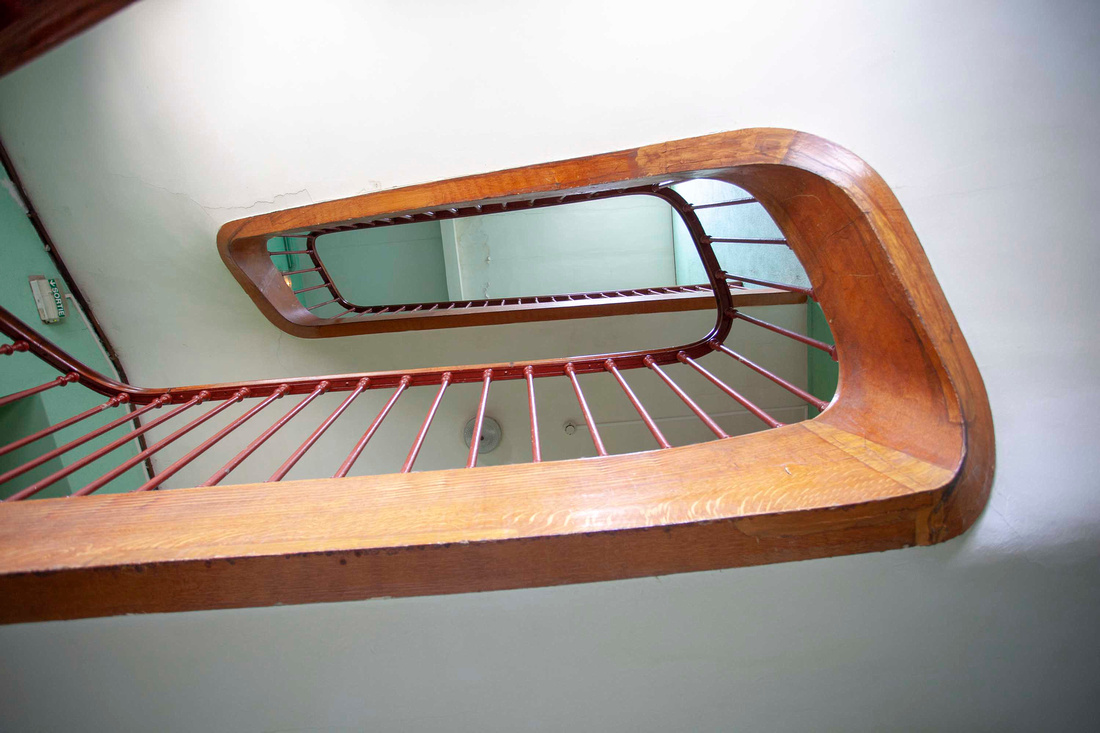 Had to go up another two floors to get to the hotel. 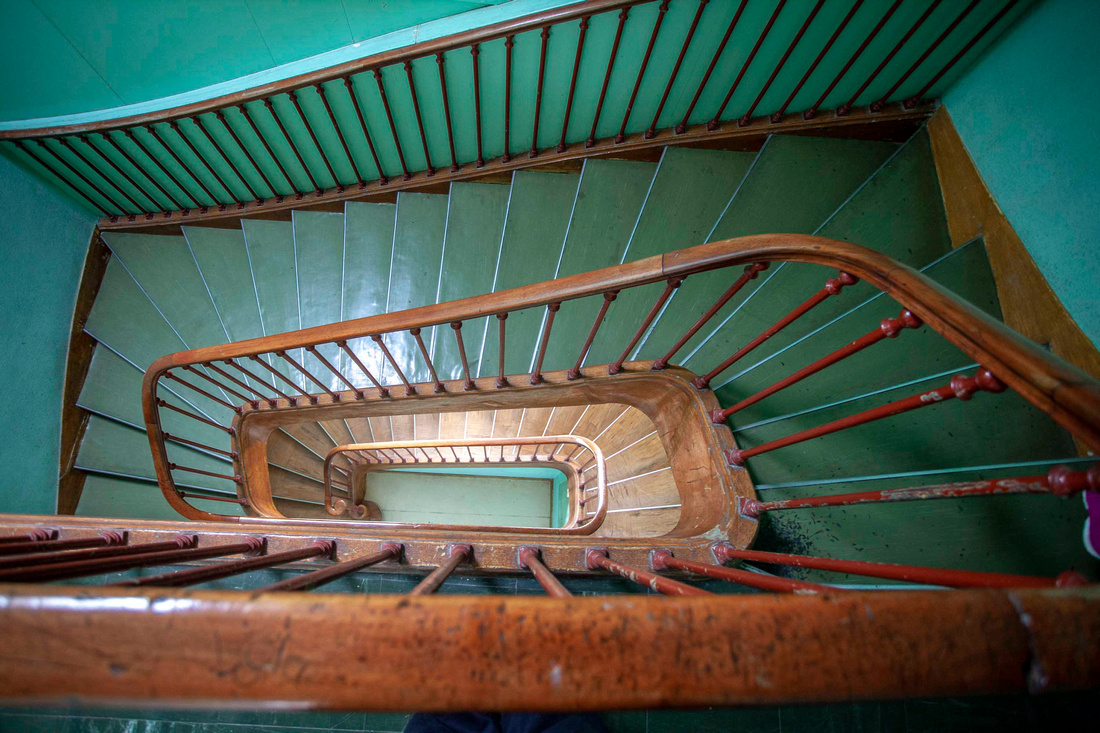 View down from the sixth to the fourth floor. 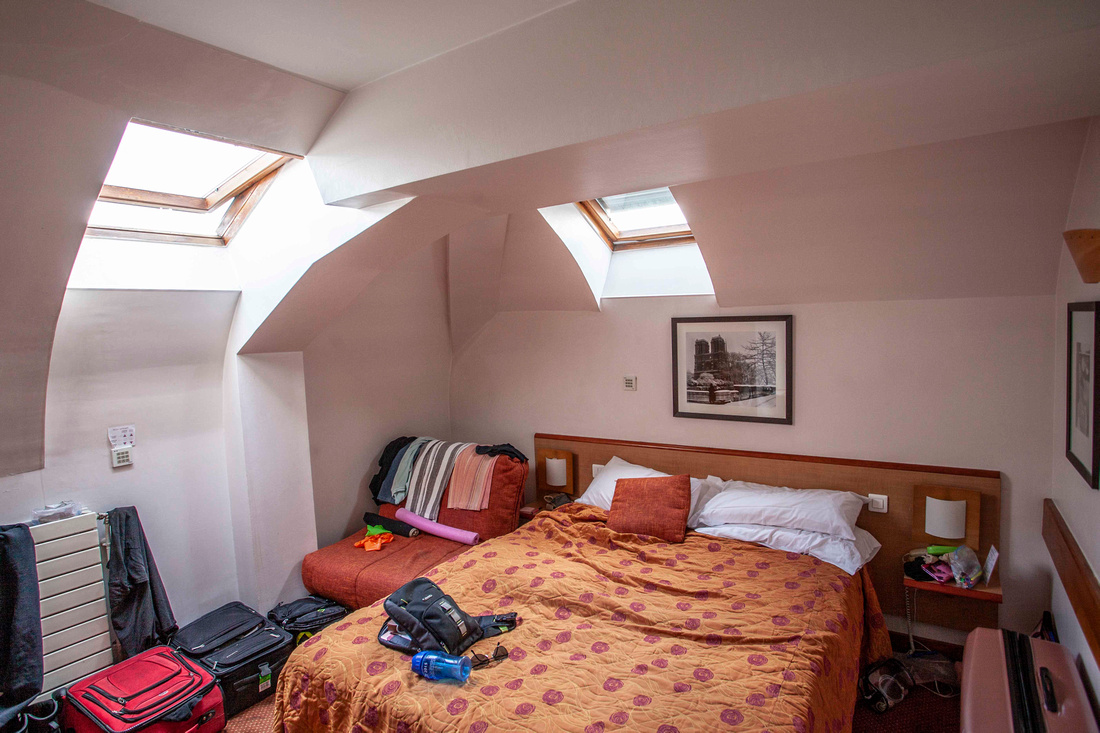 The room was small, but it has air-conditioning, a real luxury in Paris, and a small, modern bathroom in the room. It was very reasonably priced as well. 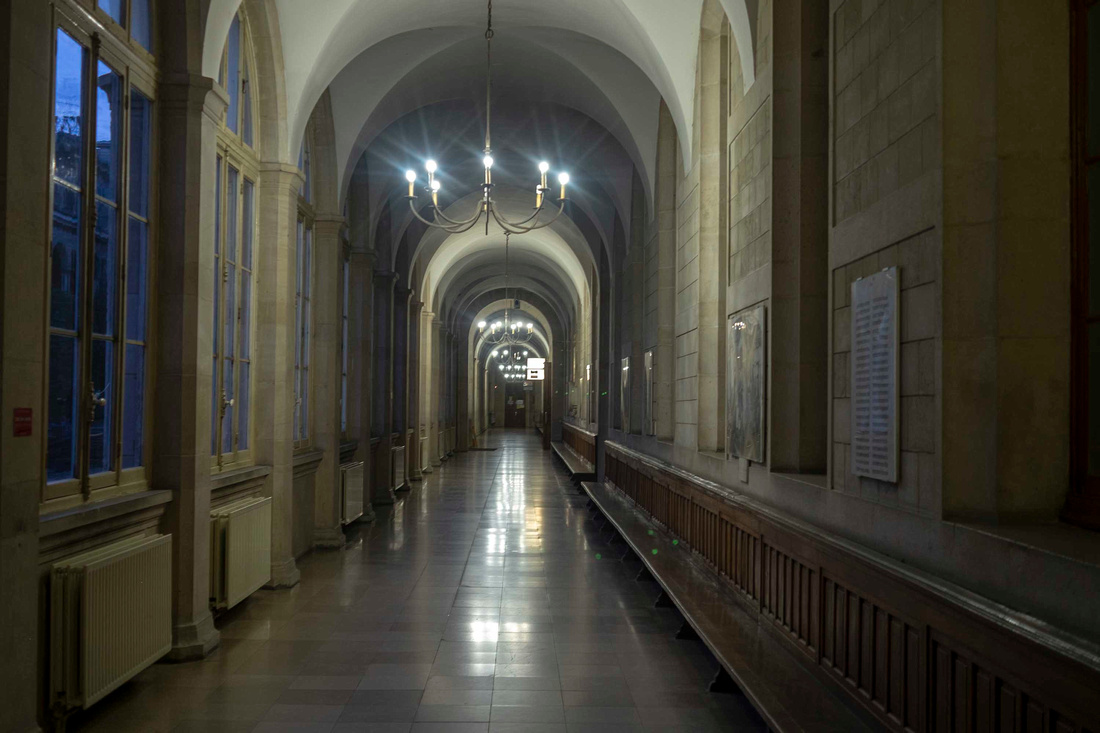 If you come in after 8:00 pm, a given in Paris in July, the hospital guard has to buzz you in through another set of doors east of the hospital's main entrance. Once you are in the building, you have to find your way through dimly light corridors and dark stairwells to get up to the hotel. Several times when we came in after 10:00 pm, a group of heavily armed solders suddenly appeared and came in right behind us. We never figured out if they just happened to be making their rounds when we came in or that they thought we looked suspicious and they were making sure we were not up to no good.

T & L Photos
Thanks, Imelda!
Imelda(non-registered)
lovely shots.
T & L Photos
Thanks, Lavinia. You need to visit.
Lavinia Ross(non-registered)
Sounds like a long, rough ride over there. I've been through Paris on the way to Provence, but never visited it. The photos are beautiful Tim, and I love that picture of Laurie. The labyrinth garden is interesting. Nicely done!
T & L Photos
Thanks, Bruce.
No comments posted.
Loading...
Subscribe
RSS
Recent Posts
Last Post on Zenfolio Walk, Run, Splash, Fly A Walk in the Snow We Wish You a Merry Catmas Cranes, Train & A Full Moon on Winter Solstice I Had A Dream Shrink Wrapped Fly Away Fire & Phantasm First Snow on the 2nd
Archive
January February March April May June July August September October November December
Timothy Price
Powered by ZENFOLIO User Agreement
Cancel
Continue