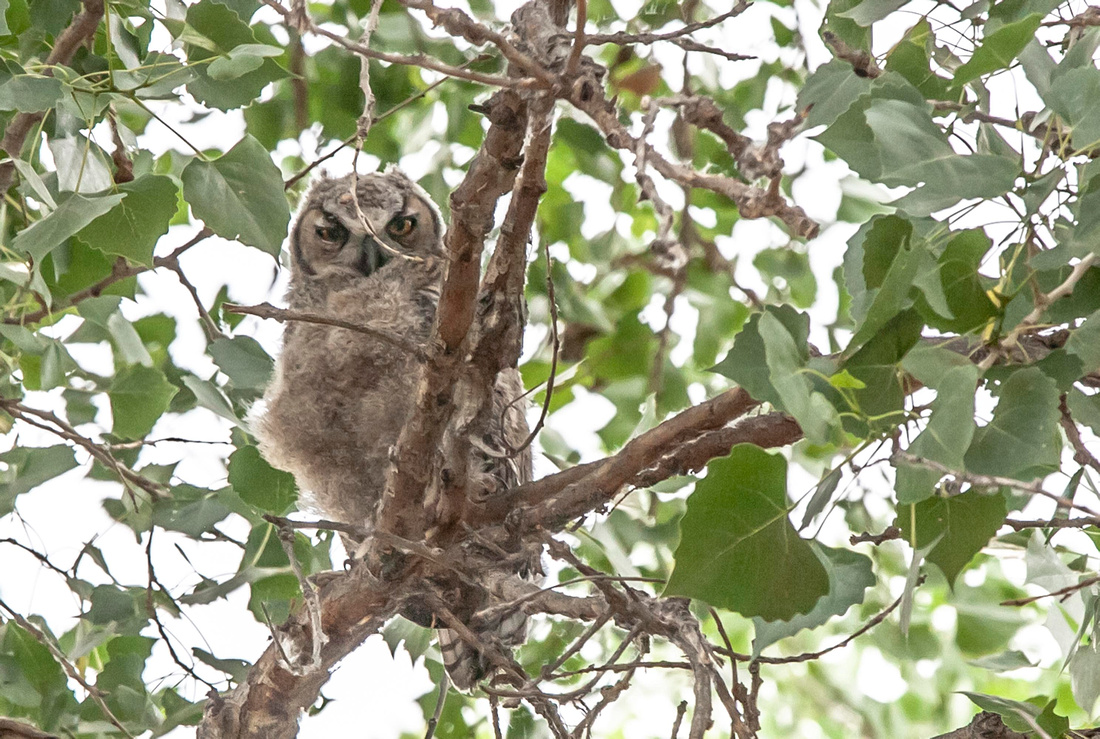 Little Owl earlier in the week giving me mad dogs. 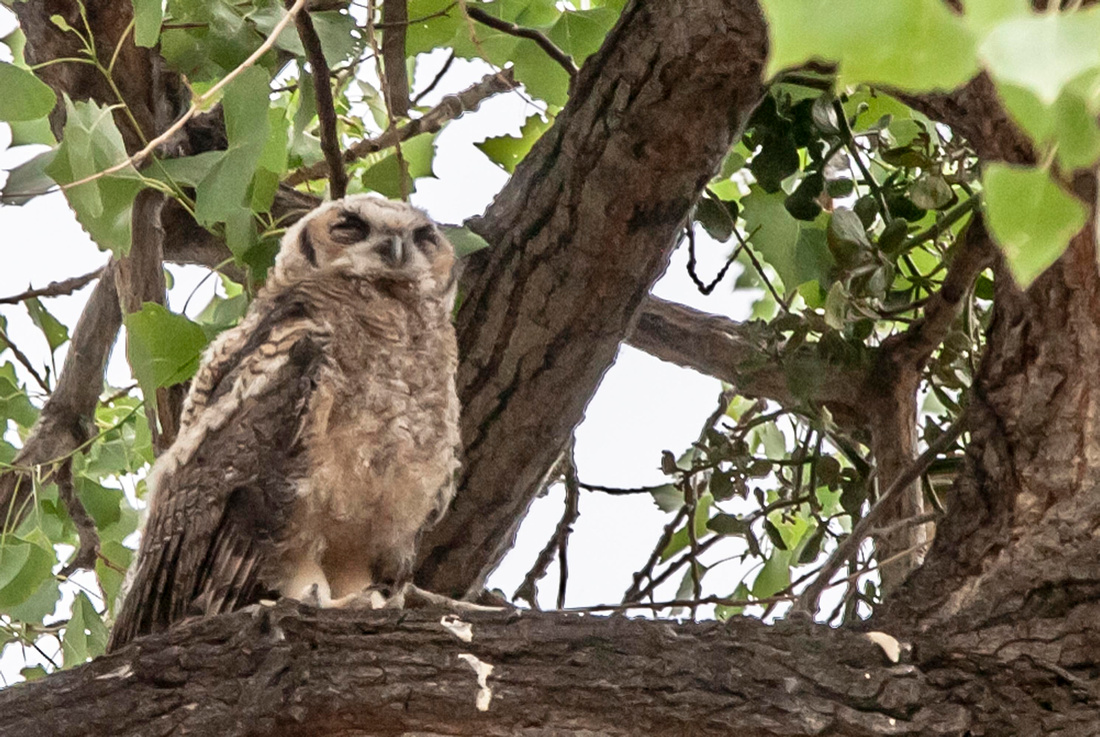 Fat Owl snoozing on a branch in a cottonwood across the ditch from where Little Owl was mad-dogging me. 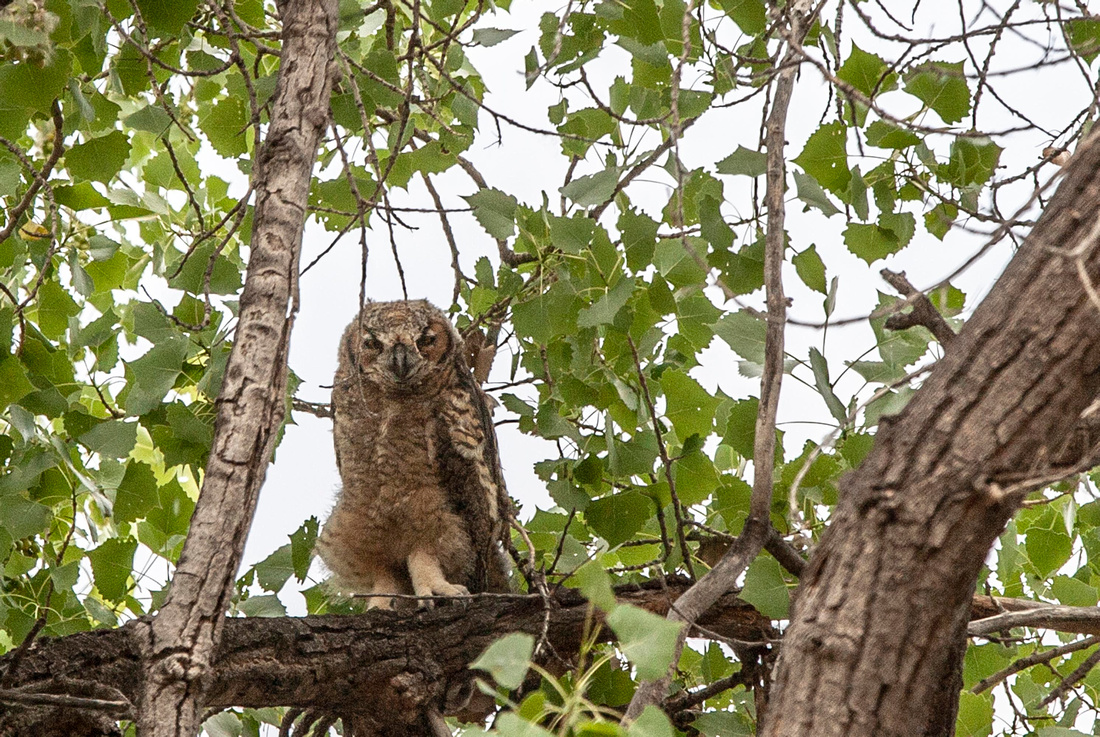 Big Owl practicing his ballet standing in third position, on a branch below Fat Owl in the tree across the ditch from where Little Owl was mad-dogging me. 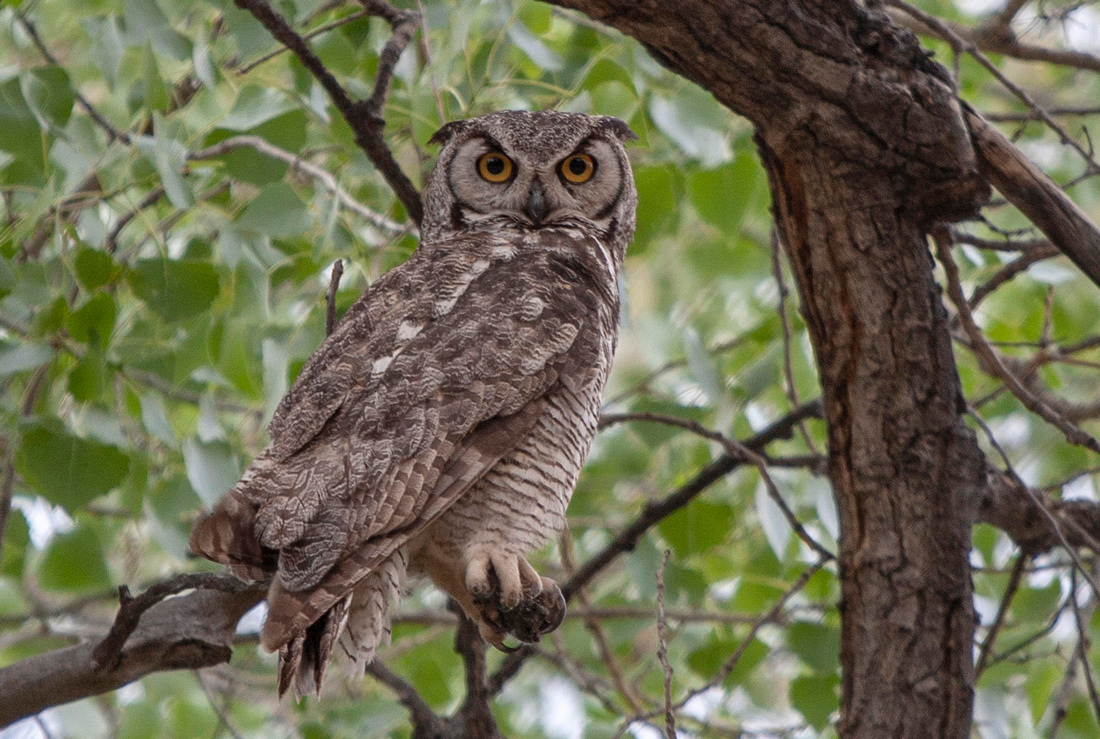 Mama Owl keeping an eye on Little Owl yesterday. Little Owl was on the next tree over from Mama Owl. Big Owl and Fat Owl were nowhere to be seen. 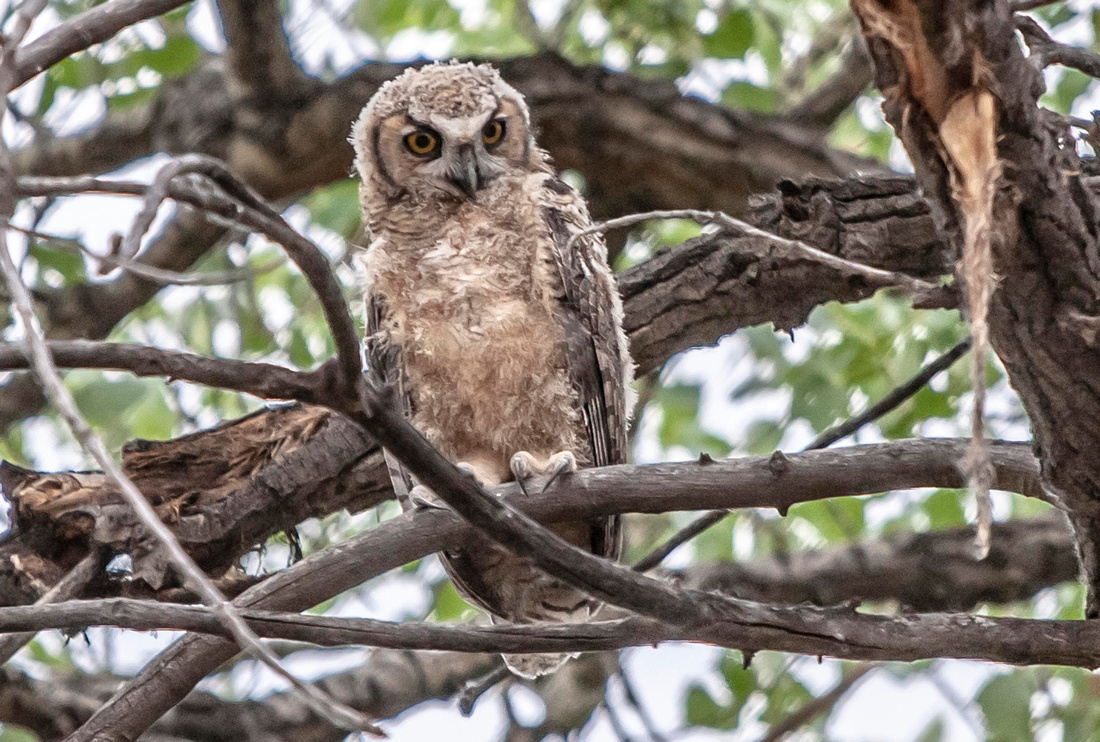 Little Owl checking out something close to where I'm standing.

A mile north of BO, LO and FO, live the New Owl Family. 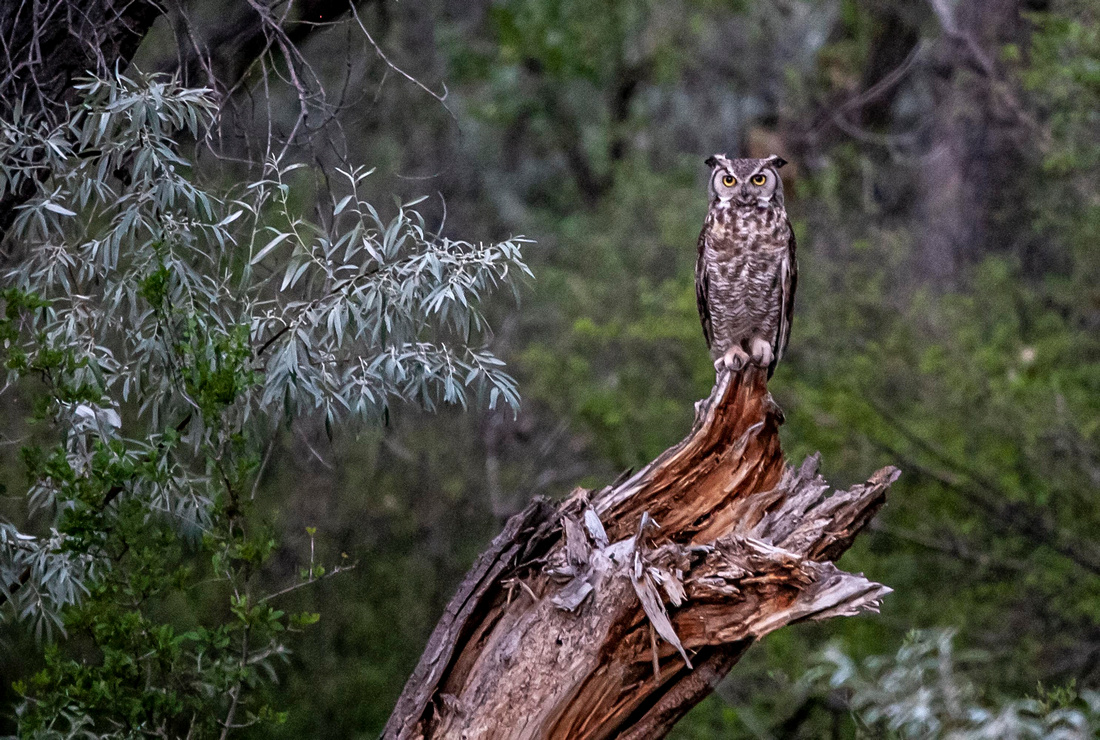 Close up of New Mama Owl. 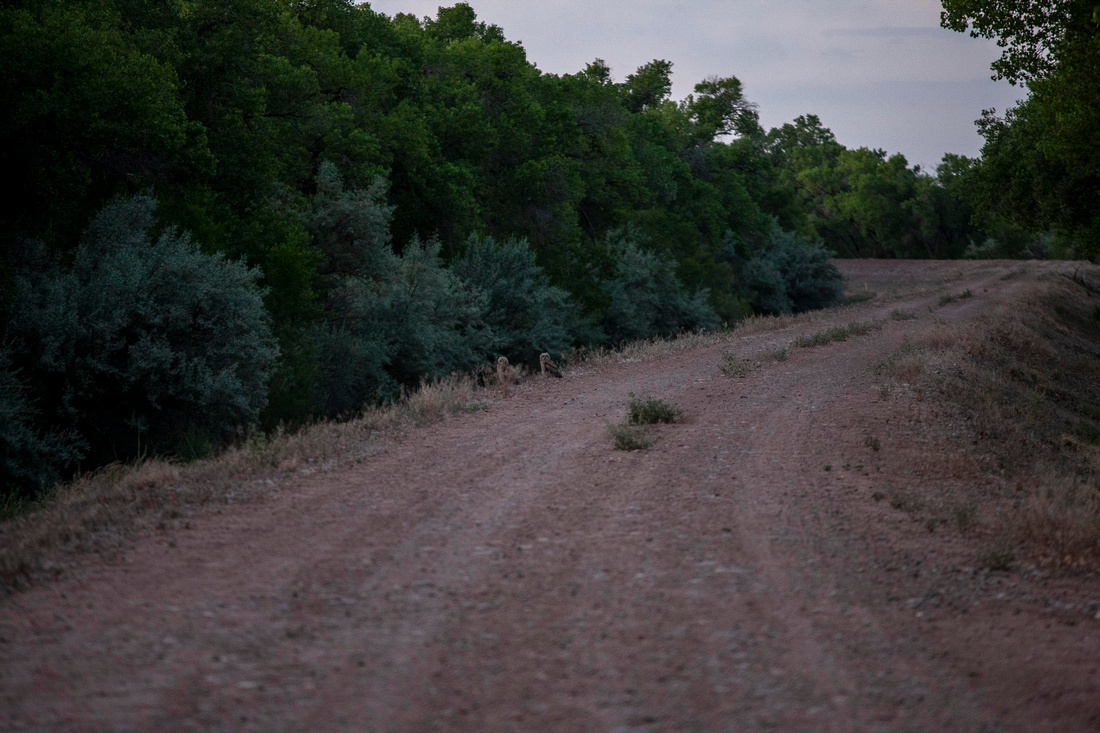 Walking a few hundred feet north of where New Mama Owl was perched in the above photos a few days ago, I saw what looked like two owls on the edge of the levee about 400 feet ahead of me. The light is really low so it was hard to make them out even looking through the telephoto lens. We discussed whether there were two owls or just one owl and a weed as we walking toward them.

Tim: There is definitely one owl, I think the other is a weed.

Laurie: It looks like the weed is turning it's head around.

Tim: I don't know it still looks like a weed.

Laurie: Now the weed is bobbing its head up and down.

Tim: You're right. The weed is an owl. 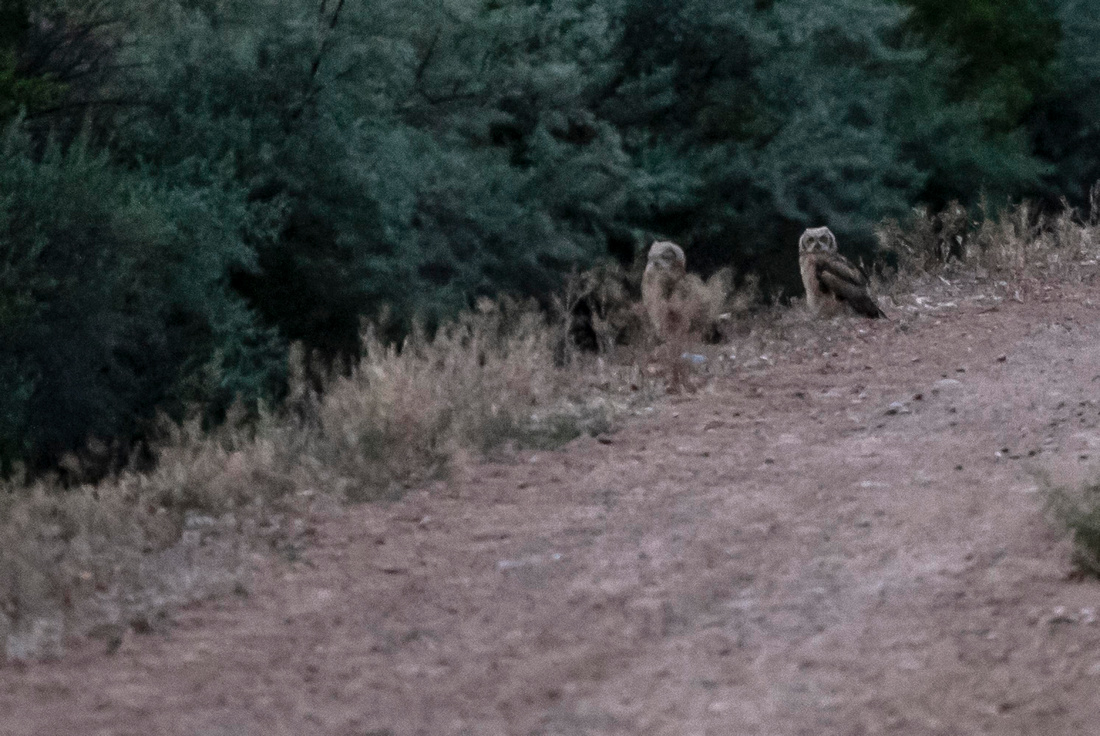 As we got close enough we could see New Owl looking at us, and his sister hanging out behind a weed. 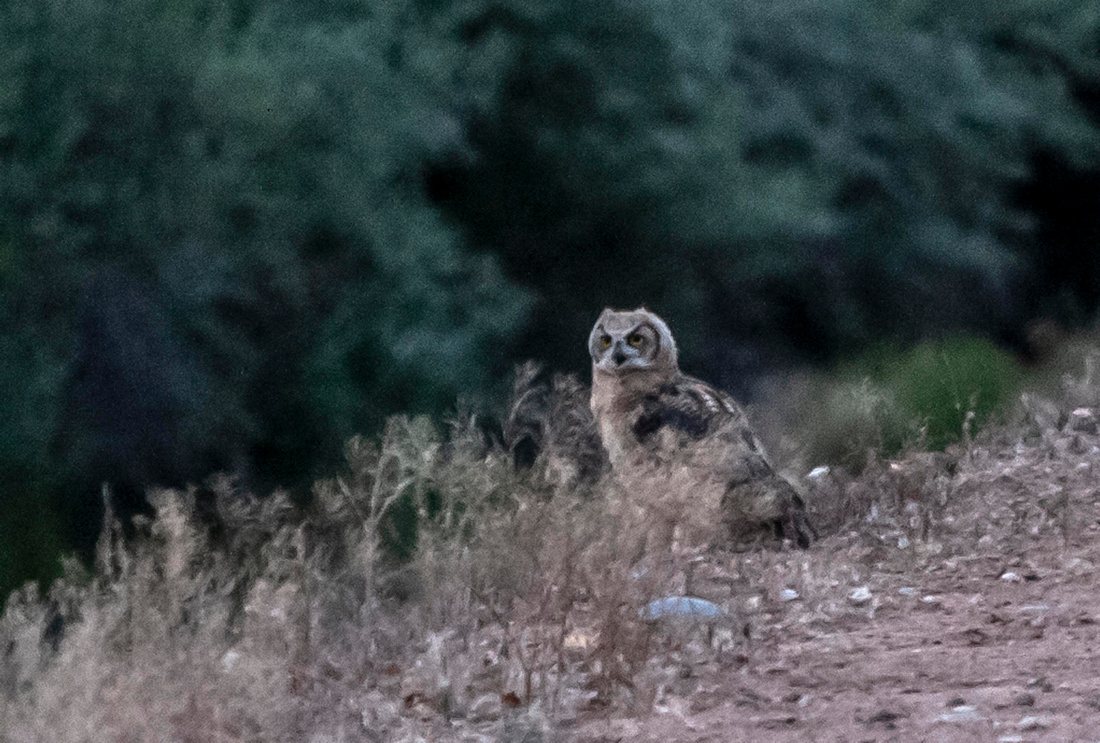 New Owl flew into the bosque, leaving Sister Owl alone on the bank with the approaching paparazzo and bella donna. 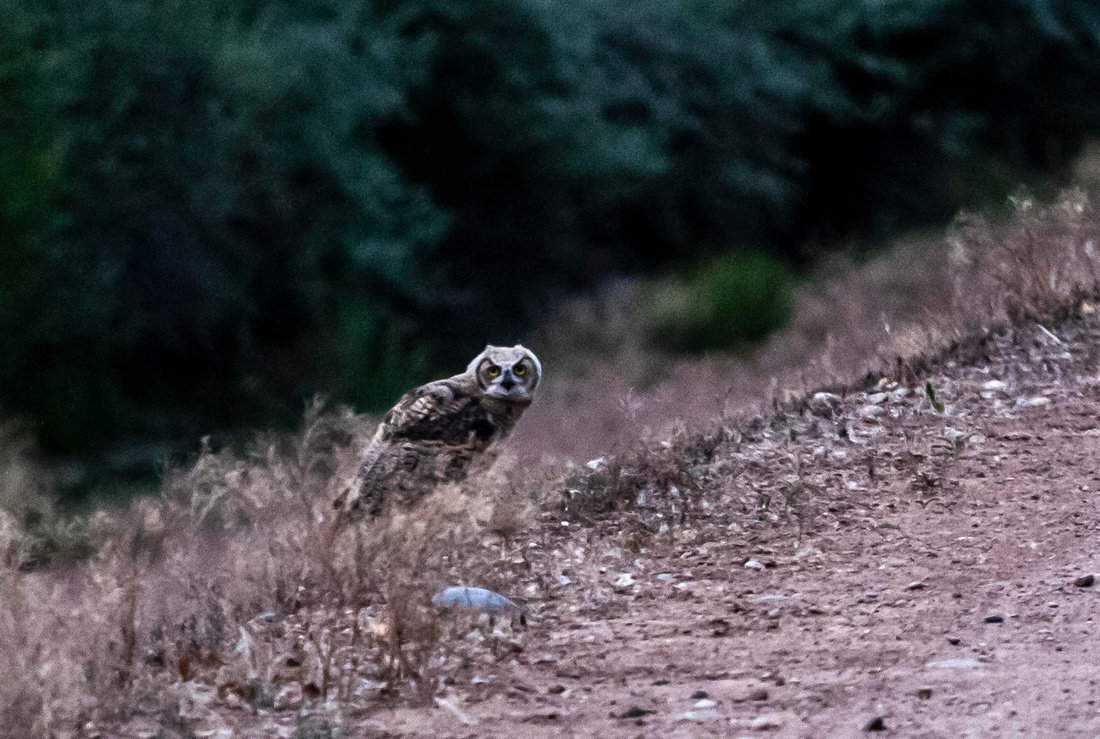 Sister Owl takes a final look at the pair approaching before flying into the bosque with New Owl. 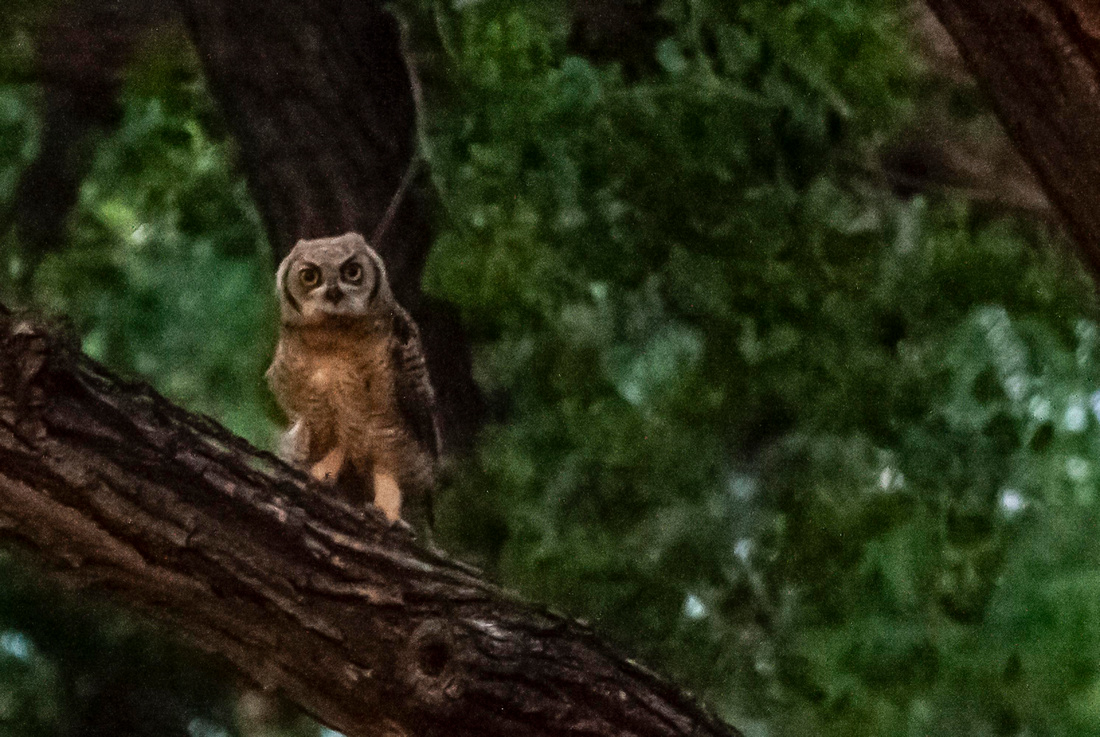 New Owl is surprised I can see him in the darkness (Don't tell New Owl, but I could barely see him). 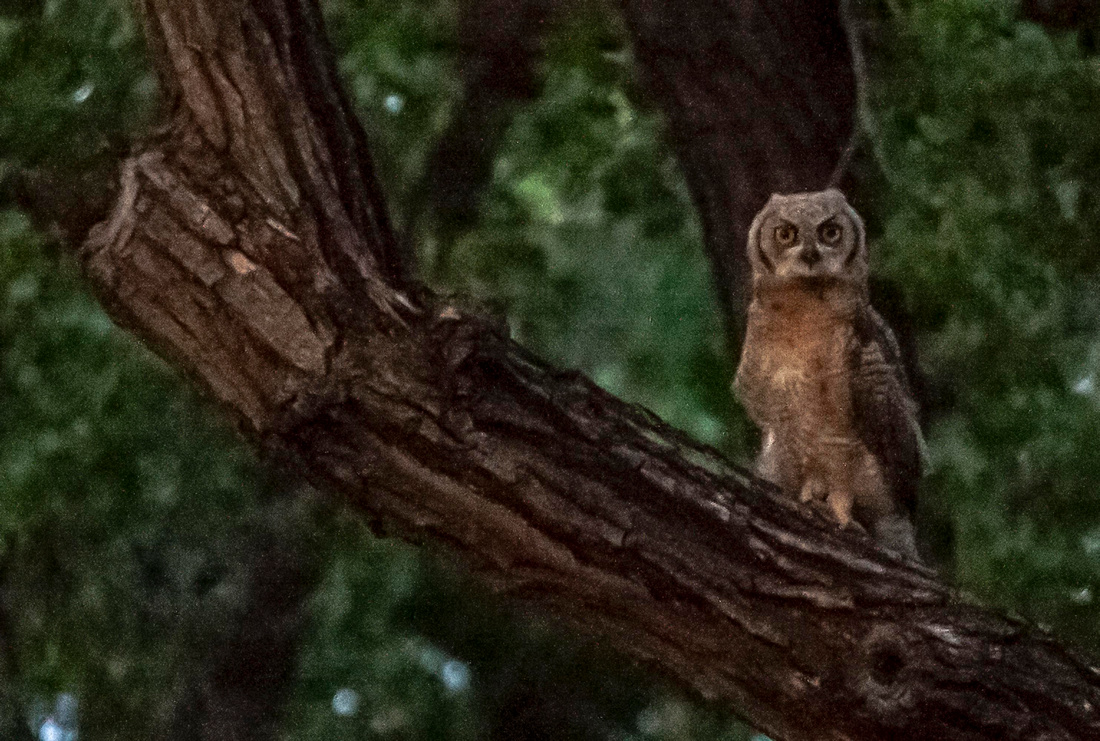 Typical "Go ahead! Make my day!" look by New Owl. 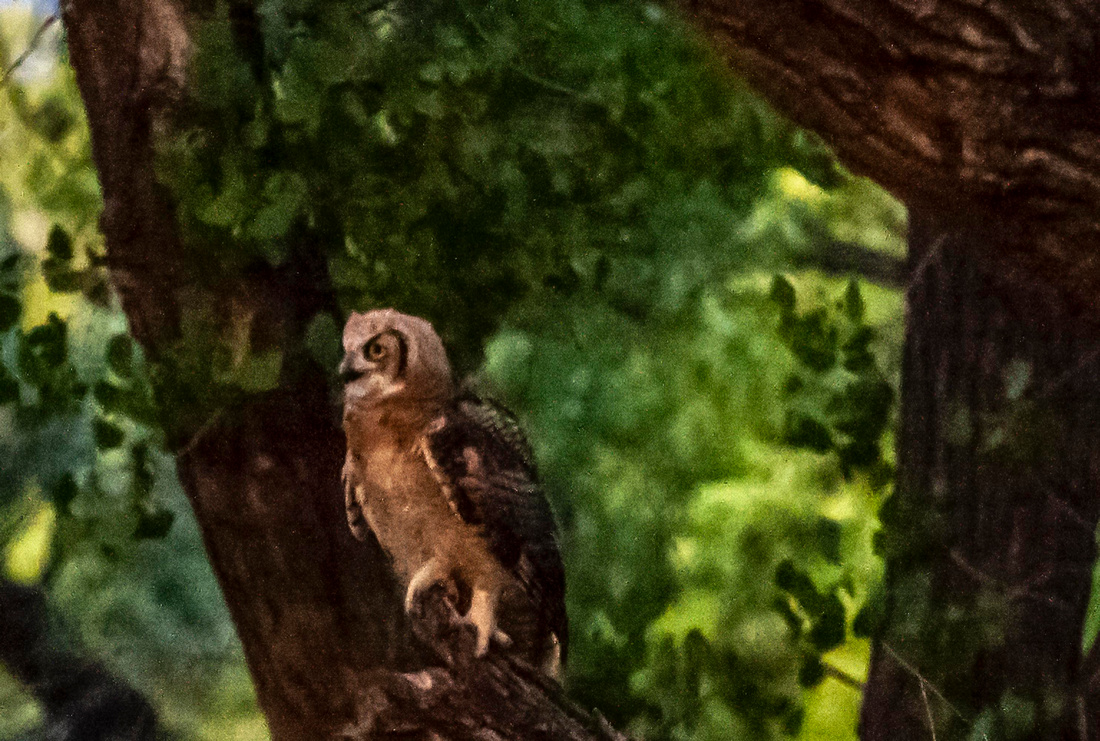 Sister Owl looking cool before she flew off into the darkness. 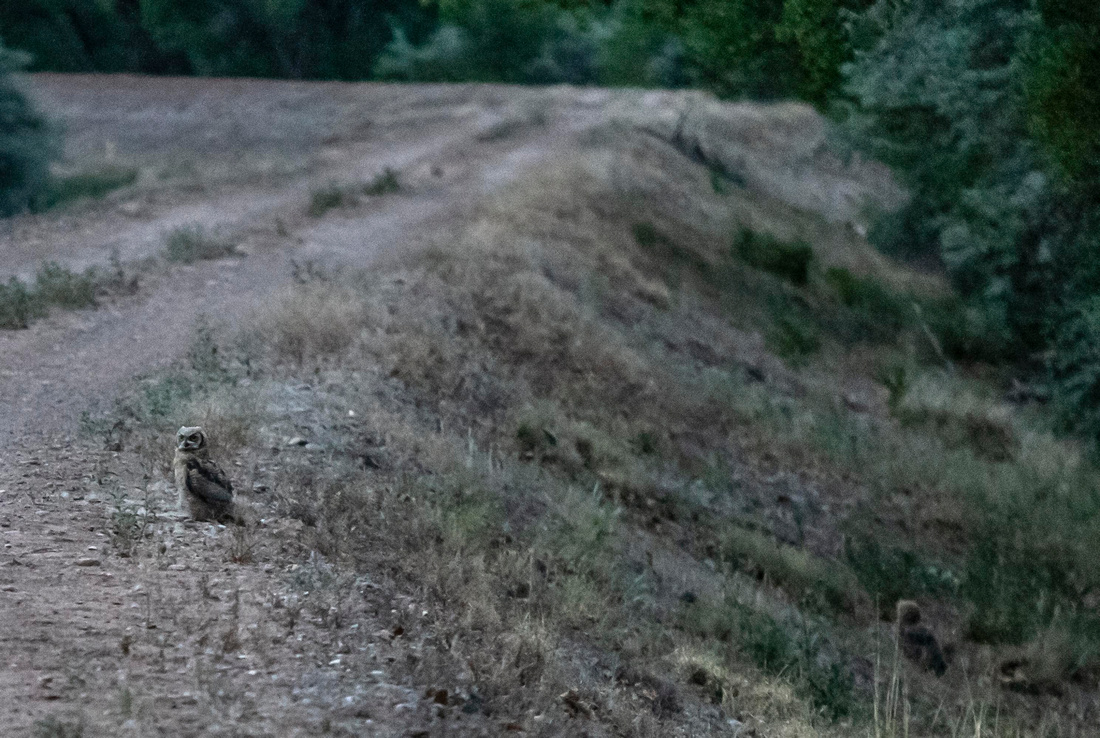 Last night I spied New Owl on the top of the bank and Sister Owl near the bottom of the bank. 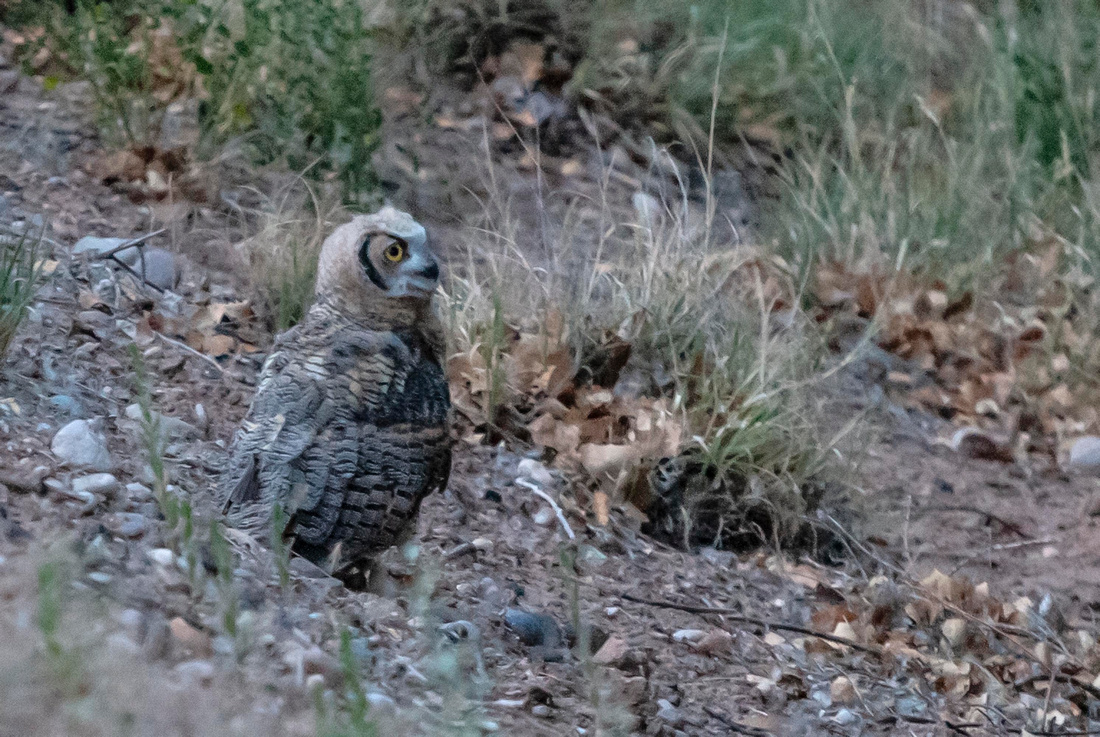 After New Owl flew onto a cottonwood in the bosque, Sister Owl let me get very close to her before she flew into a tree. 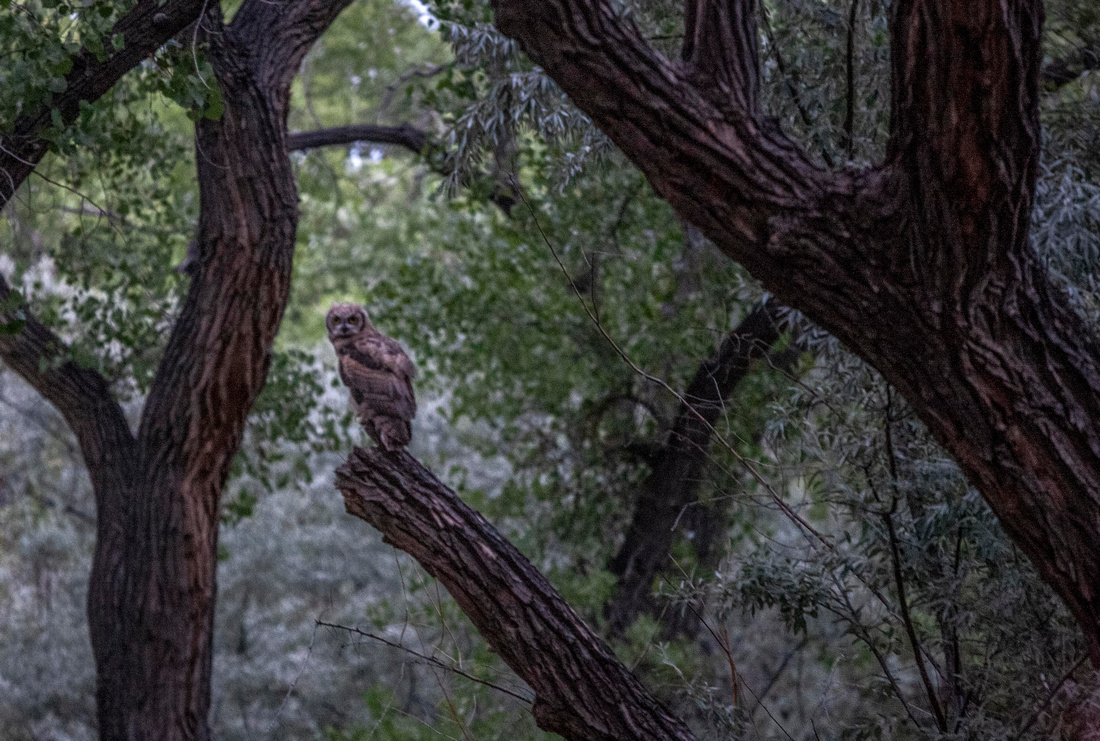 New Owl right before he flew off deeper into the bosque. 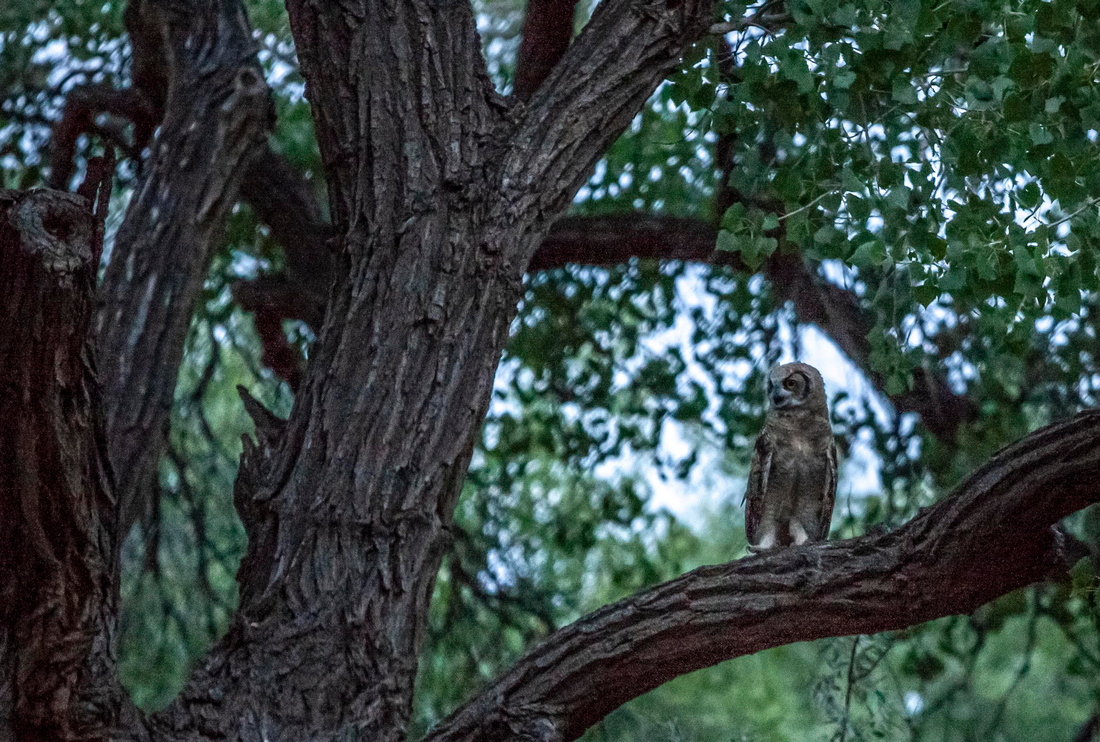 To give you an idea of how dark it can be when I'm photographing the owls, this is a jpeg from the un-processed, un-cropped raw file of Sister Owl.

When I walked by the same location on my way back home, all three owls were on the ditch bank again. I could barely see them as black blobs against the lighter bank. They all flew into the bosque and disappeared into the darkness when I got too close.

T & L Photos
Thanks, Michelle!
MichelleMarie(non-registered)
Haha I love your conversation that’s funny. You guys did a great job catching them. Wow. I love these
T & L Photos
Thanks, Couriers.
T & L Photos
Thanks, Christine. They are are very good about letting me photograph them.
Animalcouriers(non-registered)
Quite the owl community.
No comments posted.
Loading...
Subscribe
RSS
Recent Posts
Last Post on Zenfolio Walk, Run, Splash, Fly A Walk in the Snow We Wish You a Merry Catmas Cranes, Train & A Full Moon on Winter Solstice I Had A Dream Shrink Wrapped Fly Away Fire & Phantasm First Snow on the 2nd
Archive
January February March April May June July August September October November December
Timothy Price
Powered by ZENFOLIO User Agreement
Cancel
Continue