The Things We Do For Luck 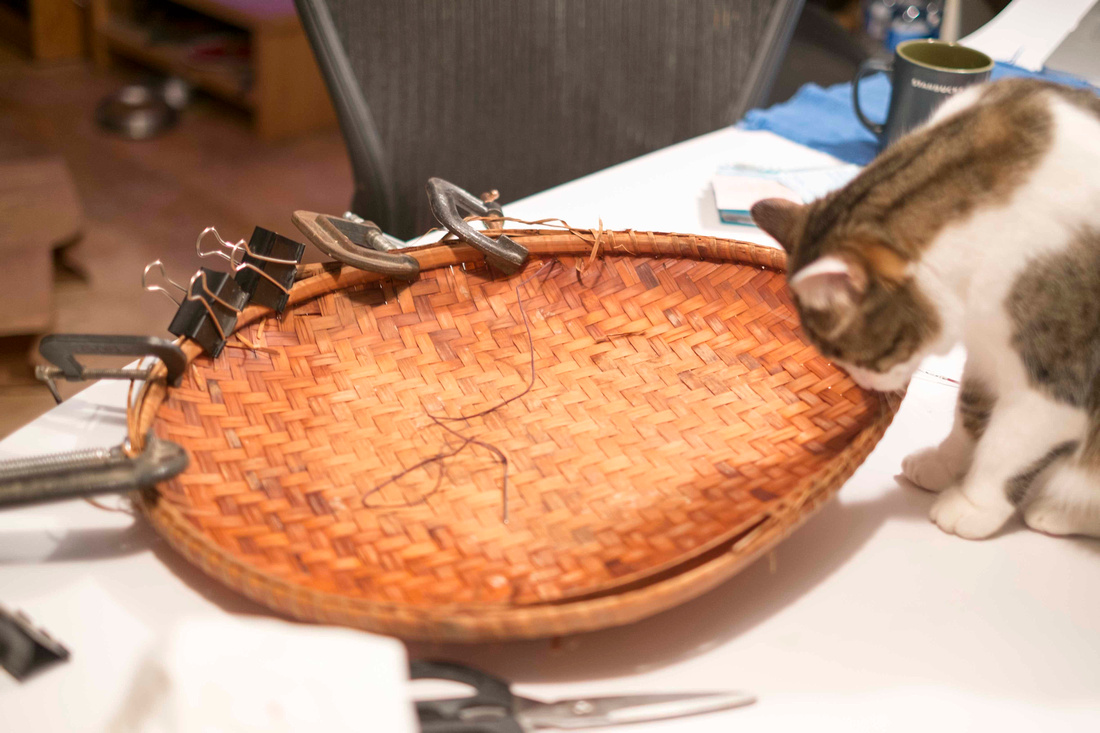 Spunk checking out the original sewing on the winnowing basket

While I don't do photo challenges, I seem to do the same thing the first of the year every year which is to help make black eyed peas, eat black eyed peas, and post photos of cats on January 1st (at least for the past three years: 2016 —  http://photos.tandlphotos.com/blog/2016/1/more-spunk-in-the-new-year, 2015 — https://photoofthedayetc.wordpress.com/2015/01/01/2014-in-review/, 2014 — https://photoofthedayetc.wordpress.com/2014/01/01/new-year-nyuu-kitty/). Well 2017 isn't much different except for the process of making black eyed peas started with repairing the winnowing basket  we use to sort the peas. The basket has been coming apart for awhile, but it recently really started to come apart. We believe we got the basket as a wedding gift 34 1/2 years ago, and it has been really useful all those years for harvesting fruits and vegetables and sorting beans before washing them. After the stitching on the basket started coming apart, I started looking for a winnowing basket in a similar size and shape. While winnowing baskets are readily available, finding one as large as this one in any shape is almost impossible. All I have found that is similar are vintage winnowing baskets that are supposed to be displayed as fine art, and they are priced like fine art.  So Laurie found some hemp thread, soaked the basket in water, we clamped it back together, and Laurie and Spunk sewed it back together with the hemp thread.

Spunk then supervised as we filled a stock pot of black eyed peas with water, Spunk was outside the pot this time, to soak the black eyed peas before cooking them. Spunk was a really good help, and worked so hard that he hit the sack early.  Several people came over this afternoon and we all ate black eyed peas for good luck in 2017. Spunk was sacked out and didn't get up until after everyone had left. 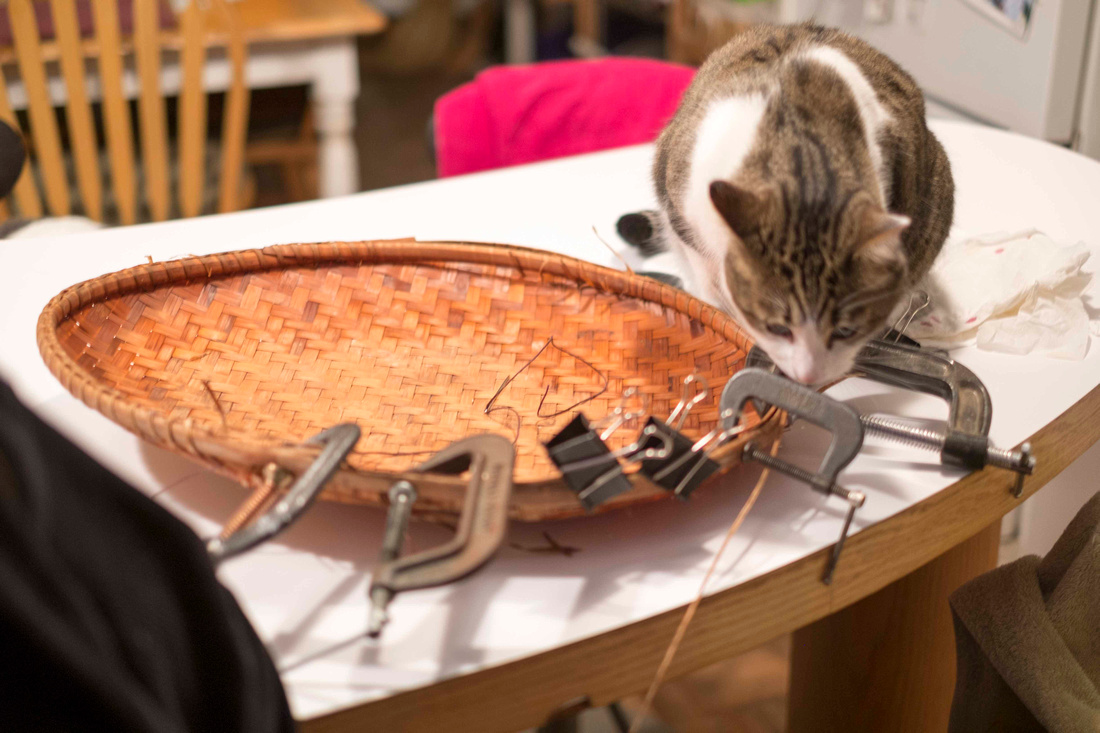 Making sure the clamps are in place 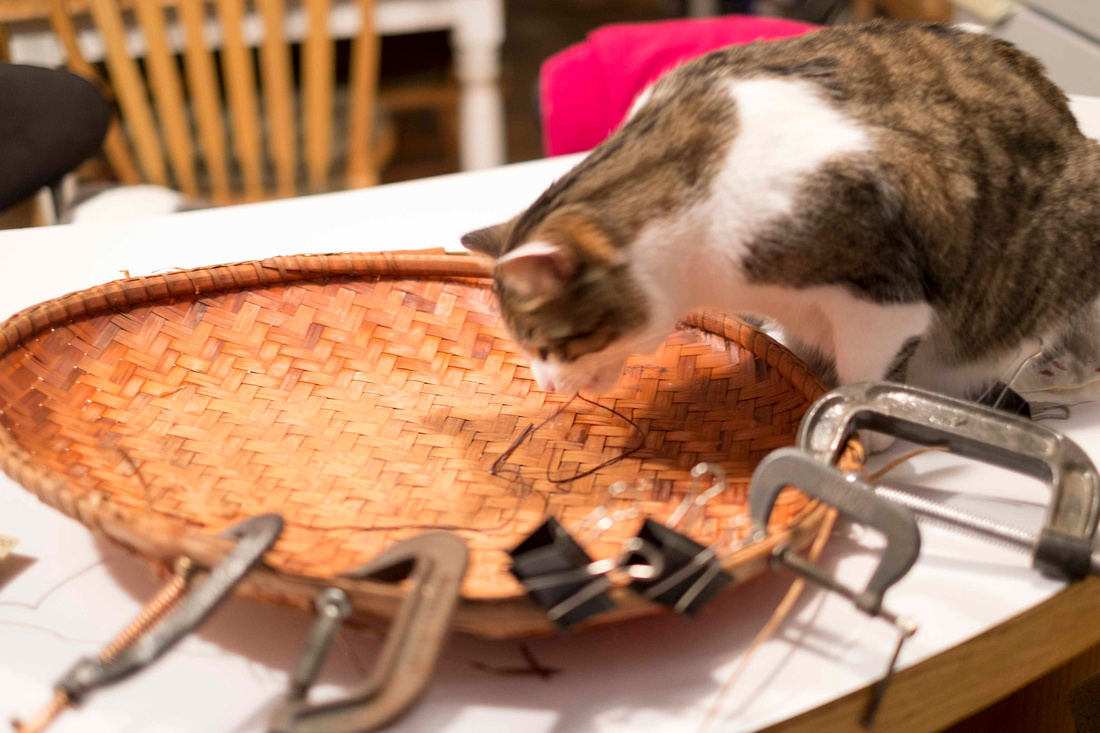 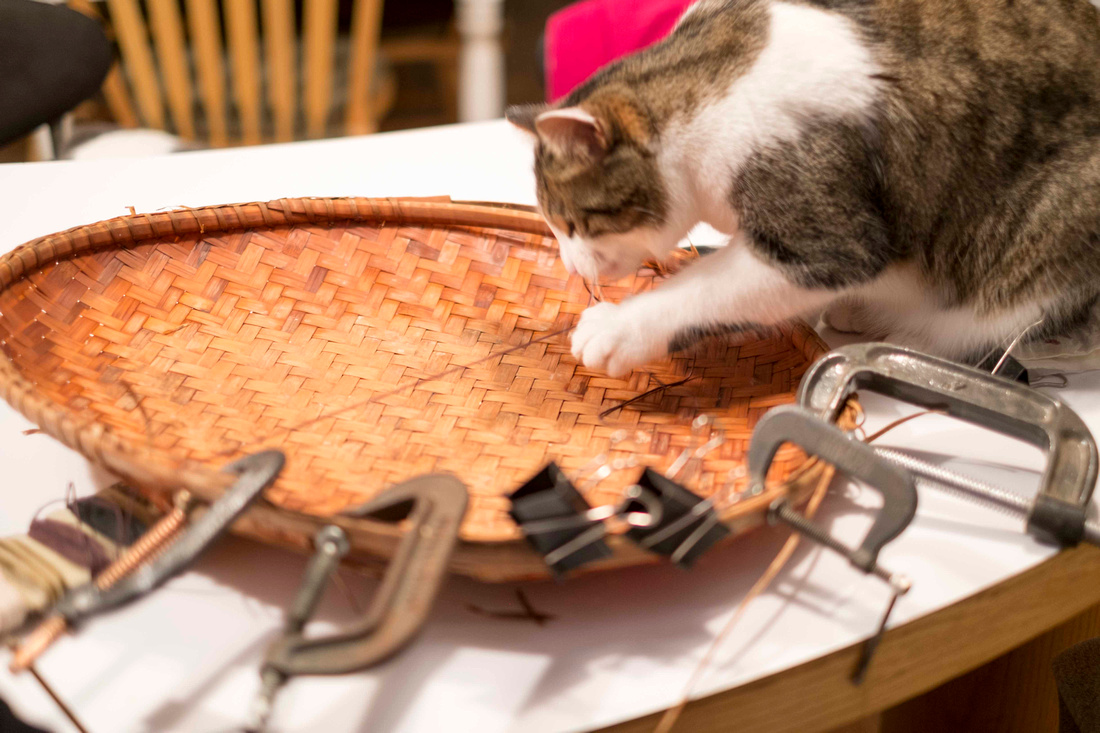 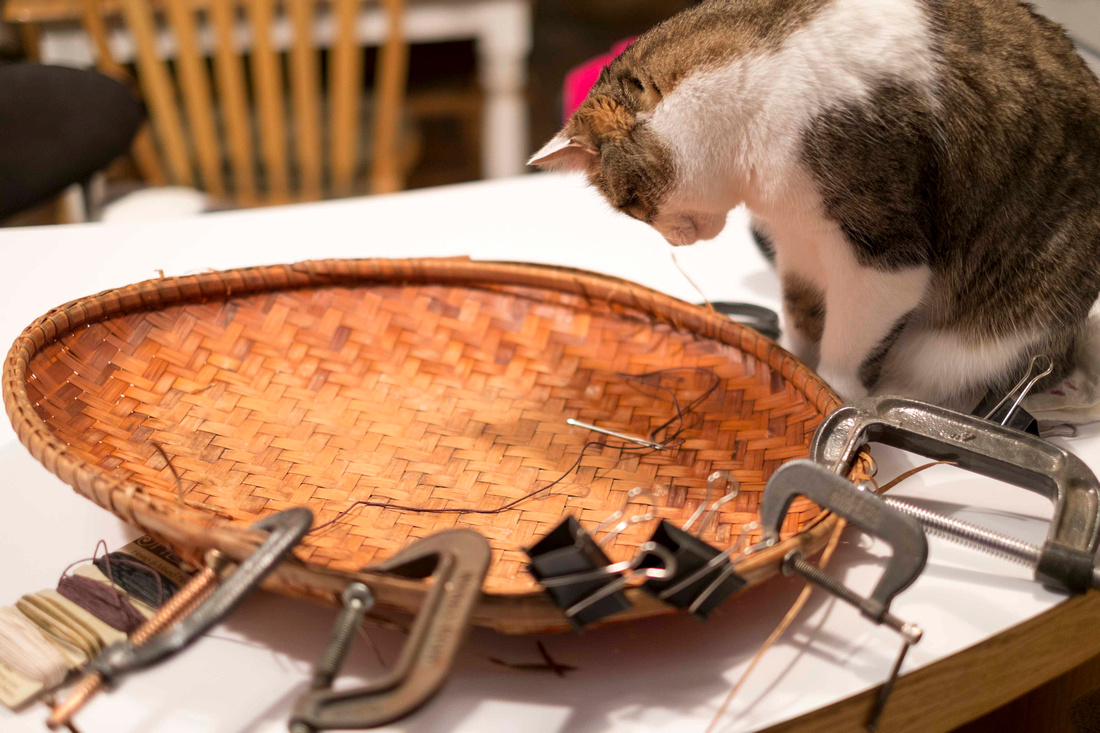 Pondering another spit in the basket 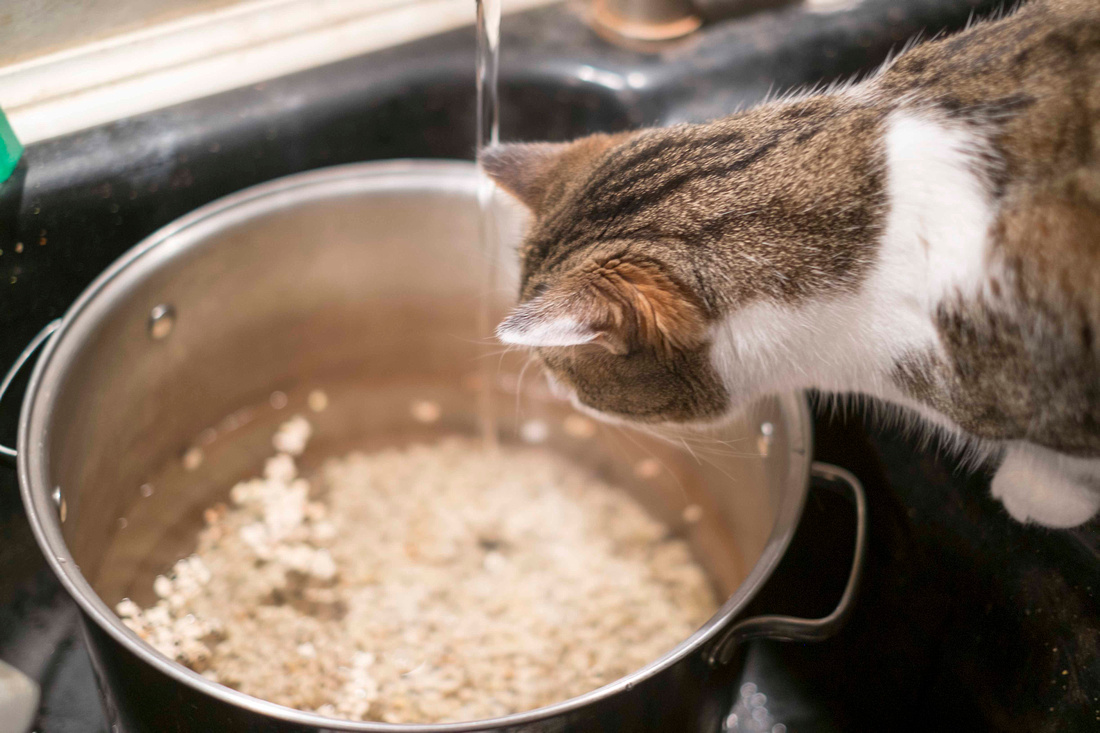 Watching the water level on the black eyed peas 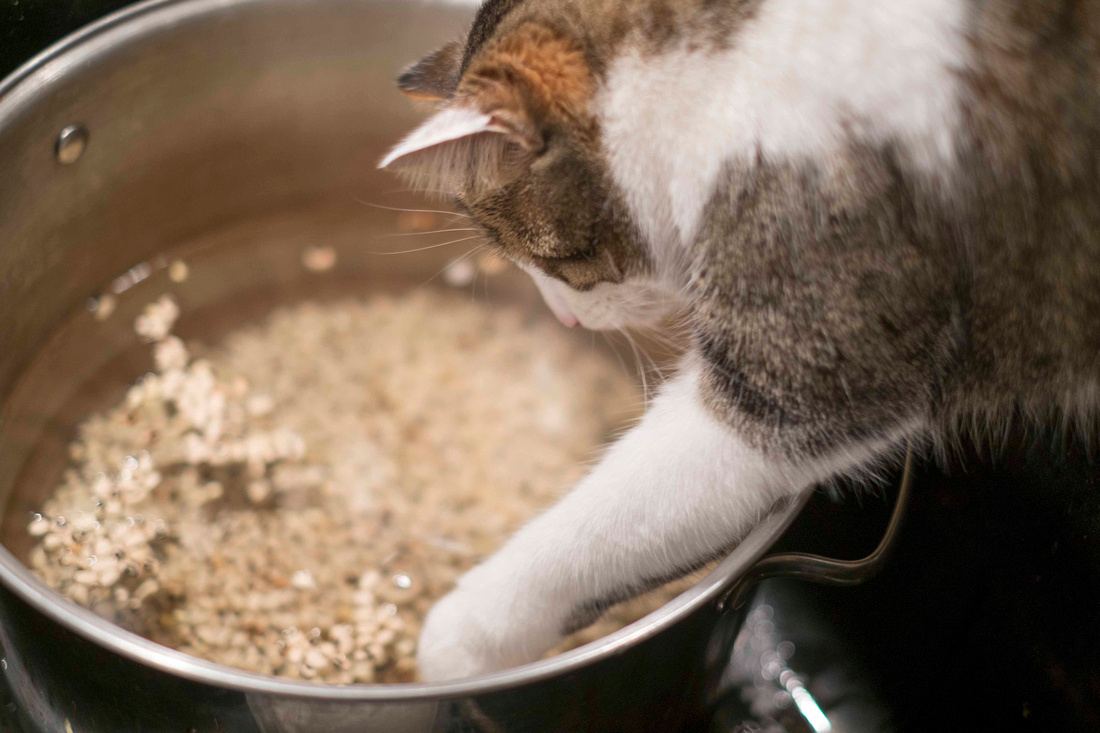 Checking out some peas floating around on top 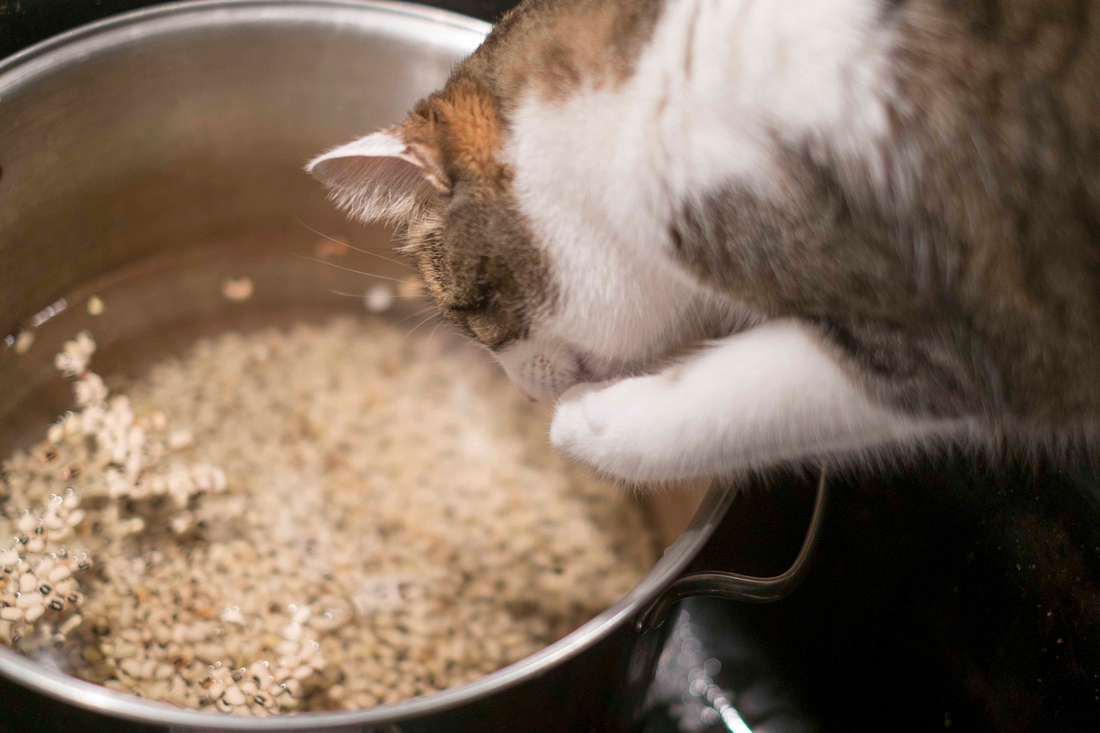 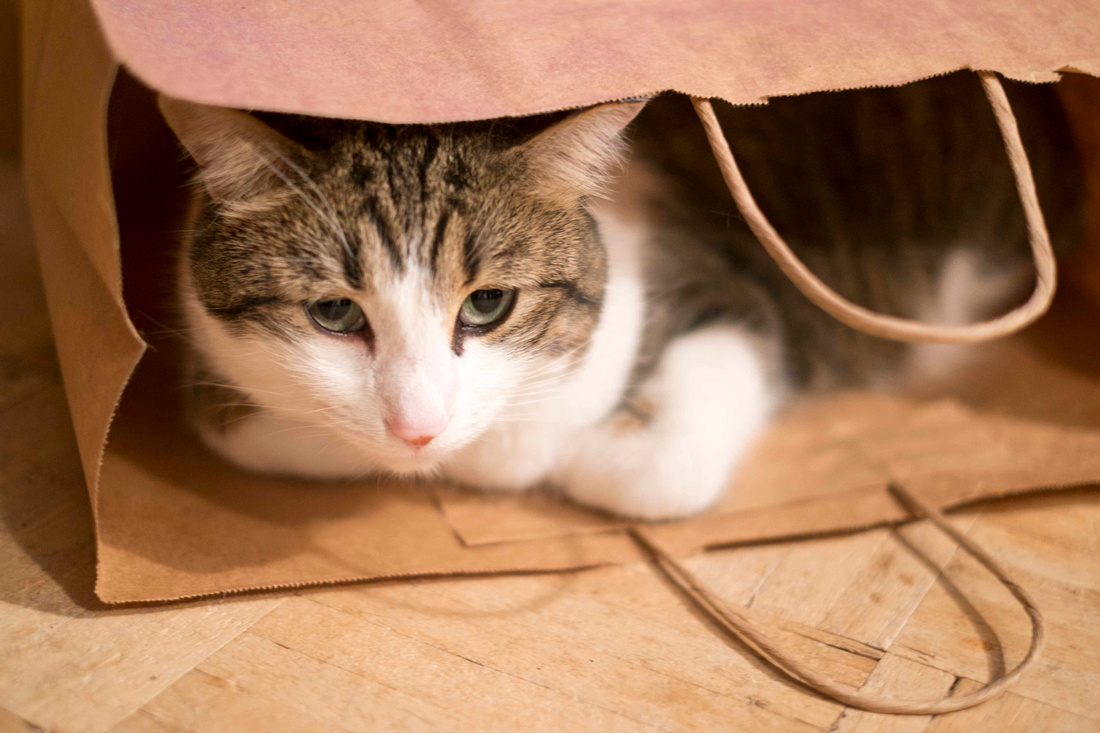 Tired after all the work on the winnowing basket and preparing the black eyed peas, Spunk hit the sack.

T & L Photos
Thanks, Julie!
Julie(non-registered)
That spunk is such a great help! Cats and peas are perfect ..
T & L Photos
Hi David. Duct tape was the next solution if the hemp didn't work.
T & L Photos
Thanks, Lavinia! I always look into repairing before replacing, especially since so many good and useful things go out of production and become hard to find. Sometimes it takes a lot of imagination and creativity to repair or even replace some things.
David(non-registered)
A "no photos" photo challenge - I'd love that. It would force one to actually write rather than relying on an image (including a drawing) to discuss a subject. :)