Pantera In The Wild 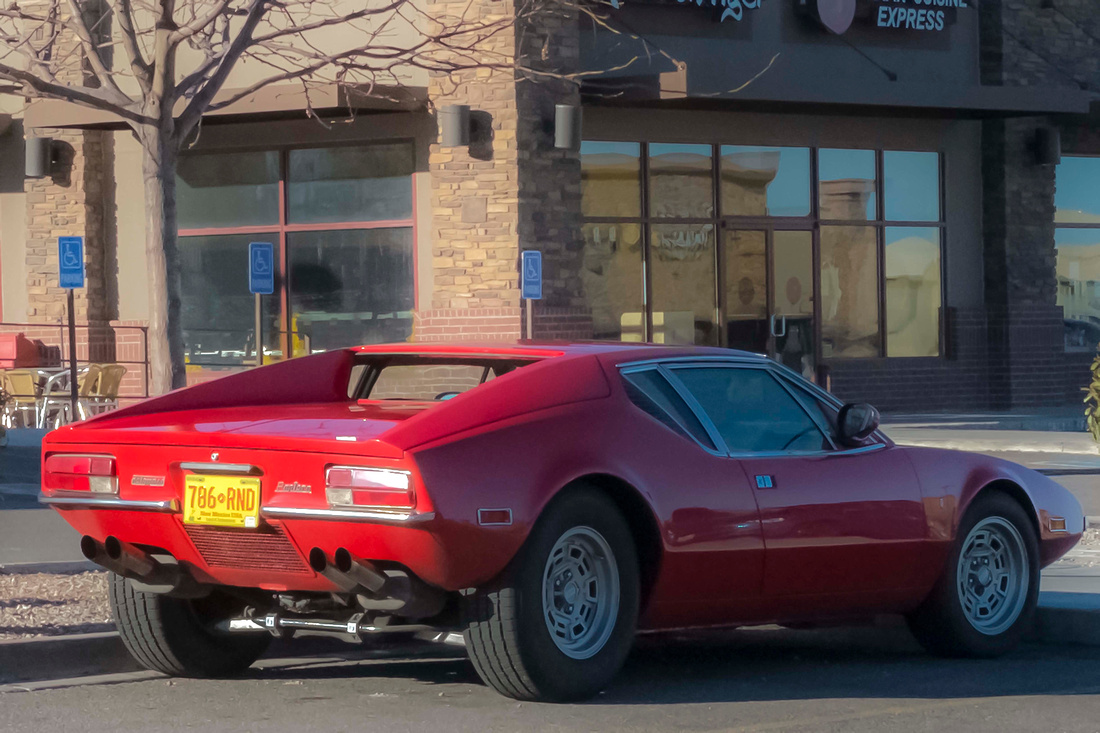 I really liked the Pantera when I first saw one in the early 1970's. This one, that I photographed in a drive by leaving the parking lot from the vet's listening to squalling cats in stereo, is in really good shape — it's probably a 1972 or later model. Apparently the first Panteras imported from Italy by Ford in 1971 had no rust treatment, low quality paint, and lots of solder to fill in body flaws and so they didn't hold up well to the elements. Ford made De Tomaso tighten up quality control in 1972, including Ford Cleveland 351 cubic inch (5.8 liter) V8 engines. The 1972 Panteras were rated at 0 to 60 MPH in 5.5 seconds, about the same as Laurie's Mazda Speed 3, and the 1973 models did 0-60 MPH in 6.5 seconds, about the same as my Mazda RX-8.  Laurie's Speed 3 has a 2.6 liter engine, and my RX-8 has a 1.3 liter engine — speed has become much more efficient over the years.  Panteras in good condition like this one have asking prices of up to $175,000, but probably average around $40,000 from the listings I looked up. While I think Panteras are good looking cars, I'll stick to my RX-8.

T & L Photos
It seems like a lot of people haven't heard of them. There was not a lot of them made. Thanks, Julie!
Julie(non-registered)
Hey Tim .. it looks like a 'go fast' car! I haven't heard of a Pantera before ...
T & L Photos
Hi David. According to the NADA price guide a 1972 Pantera's MSRP was $9,000 which is $51,676 today. The Pantera was the same price as a 1972 Porsche 911S coupe. They were about $30K lower priced than 1972 Ferraris I found MSRPs for, but still pricy compared to even the more expensive Fords in 1972. A tricked out Pontiac LeMans Luxury 4 door hardtop with a 455 in 1972 had an MSRP of $3300 about $19,000 today.
David(non-registered)
I read in Popular Mechanics, long ago, it was the "fast car" for those without deep pockets. It's acceleration rate was meant to be equivalent to the family car since many did not have the experience of driving fast cars. My dad's Pontiac LeMans at the time had a 454 cu-in V8 (I think an Olds engine), but only a 2-bbl carburetor.

The only Pantera I saw was rusting out badly. It must have been one of those early builds.
T & L Photos
Thanks, Lavinia! I've seen several Panteras in Albuquerque over the years. Although they are fairly rare with only about 7200 built during the 20 years they were manufactured.
No comments posted.
Loading...
Subscribe
RSS
Recent Posts
Last Post on Zenfolio Walk, Run, Splash, Fly A Walk in the Snow We Wish You a Merry Catmas Cranes, Train & A Full Moon on Winter Solstice I Had A Dream Shrink Wrapped Fly Away Fire & Phantasm First Snow on the 2nd
Archive
January February March April May June July August September October November December
Timothy Price
Powered by ZENFOLIO User Agreement
Cancel
Continue