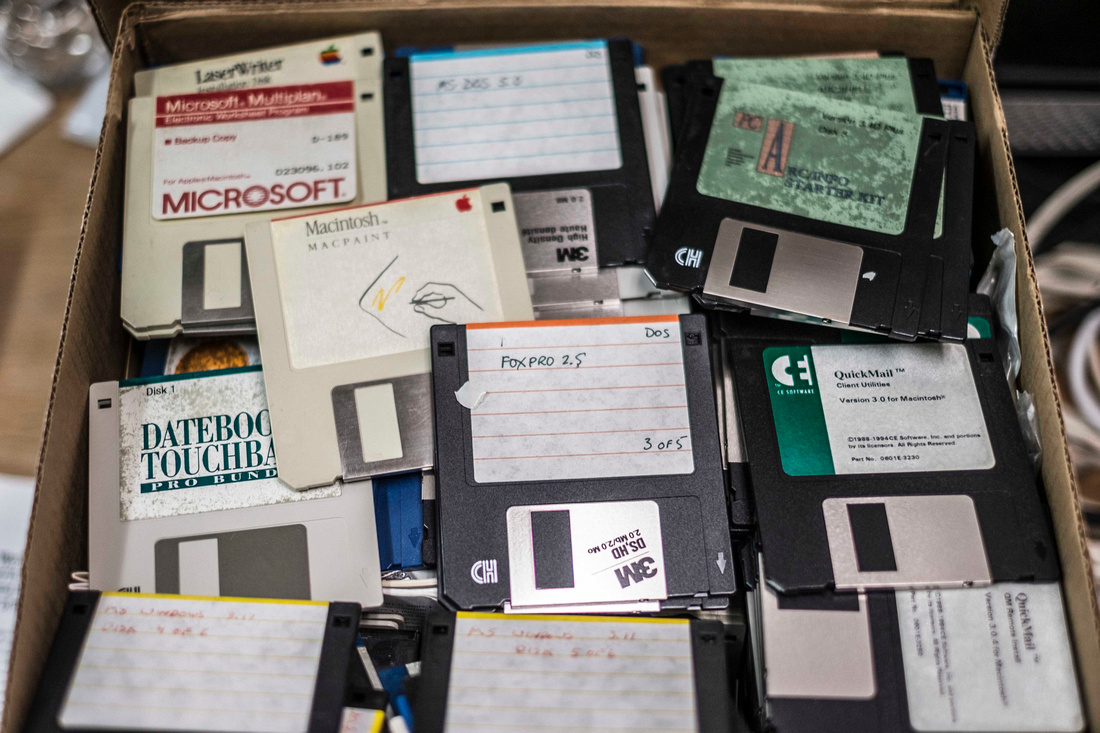 A box of old 3.5" floppy diskettes. We have boxes and boxes of floppies.

After painting the office, and between sewer sleuthing, we have been going through 40 years of old file boxes that we've had stored offsite for the past 30 years. The file boxes include 25 plus years of old computer components and archiving technologies long gone obsolete. After Dolores dumped a box of 3.5" floppy disks and a box with old Syquest 40 Mb removable hard drive cartridges and a Syquest drive on my desk, the company's president wanted to know if we had any way of reading the old, obsolete, archived data. Not with anything that's been around for the past 20 years, that's for sure, so I dug out an old Macintosh SE/30 and tried to fire it up. It showed the drive was bad, and it wouldn't read any of the boot diskettes I tried. Then I pulled another SE/30 out of storage and the screen wouldn't come on. So, I took both computers apart and swapped drives, and after several shocks of turning the Macinstein SE/30 on, off and back on it came alive and booted up, launching QuickMail Pro  as it started up — we have like ten million diskettes for QuickMail Pro from over something like 20 years of using it as our mail client before Mail became available with Mac OS X. I connected the Syquest drive, rebooted the Macinstein and mounted a removable hard drive cartridge from an old project. I opened Microsoft Excel 5.0 and Word 6.0 and Ready Set Go and they all worked. I don't know how many people know that Microsoft developed MS Office for the Macintosh long before Windows existed.  After getting everything running and digging out an old SCSI external hard drive to test moving files via external SCSI hard drive, I asked the company's president if he wanted me to do anything with the old archived files I could access. The answer was no not at the moment. He just wanted me to see if we could still access the obsolete media in case we needed to retrieve some of it one day. I have have had to retrieve ancient files from old projects in years past, but it's been a while.  It's good to know we can still access some of the old files, and, besides, it was a fun exercise dinking around with old hardware, and taking a walk down obsolete cyberware memory lane. 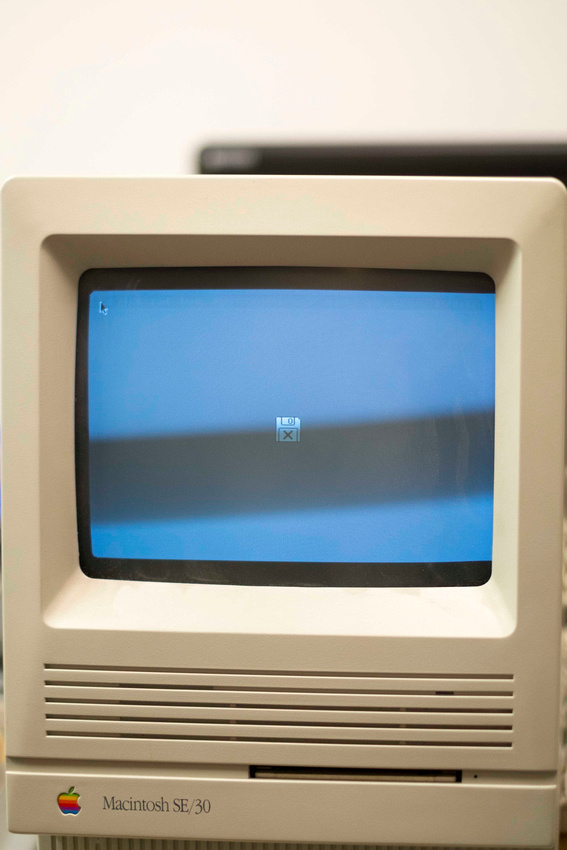 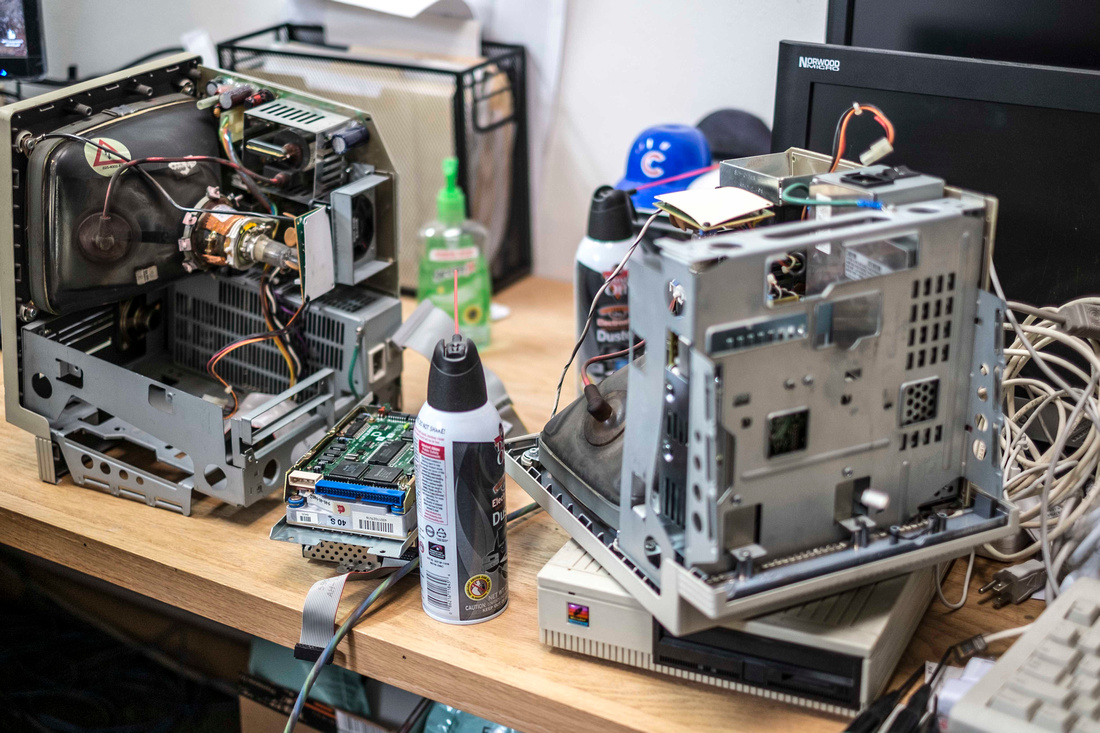 Two SE/30's I took apart to swap the drives. Apple had not intended users to work on these Macs. Fortunately I still had the tools to get to the screws and crack open the case. 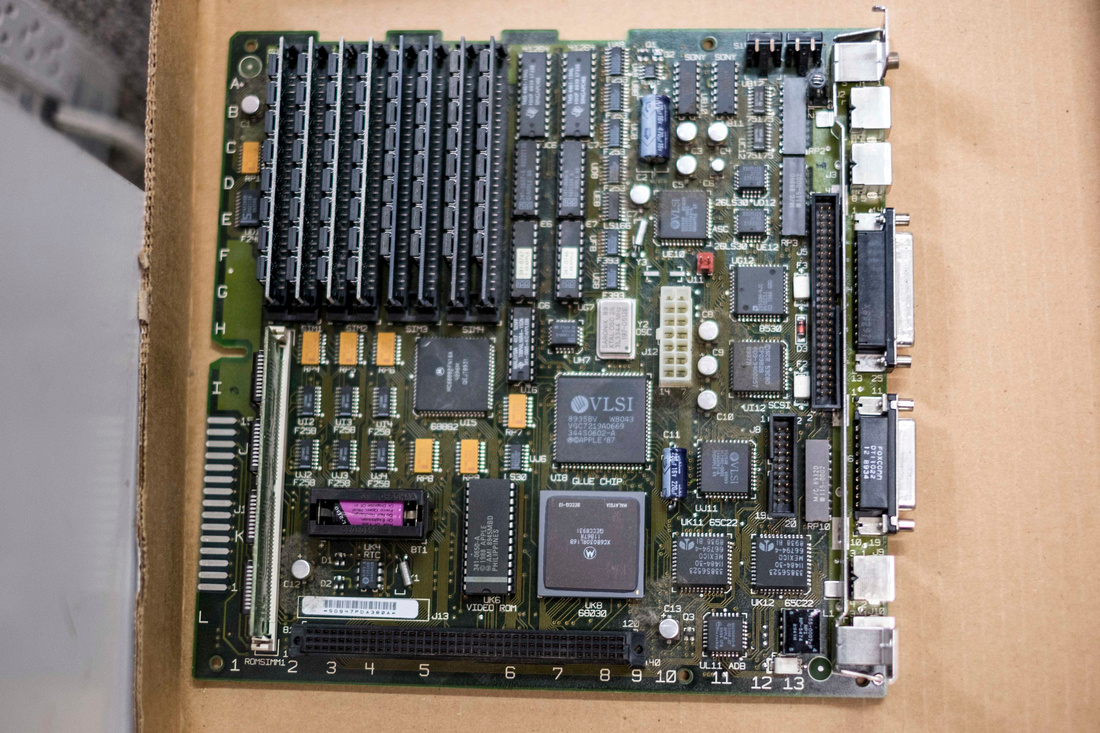 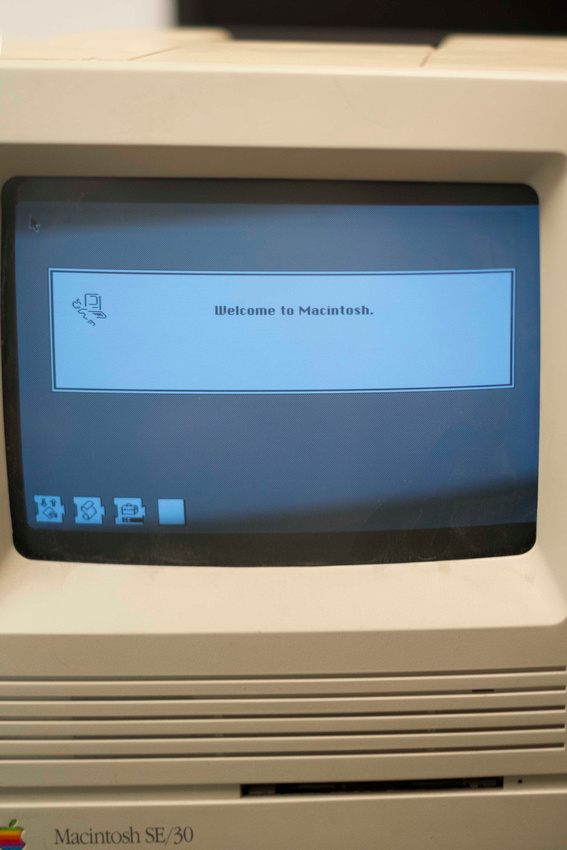 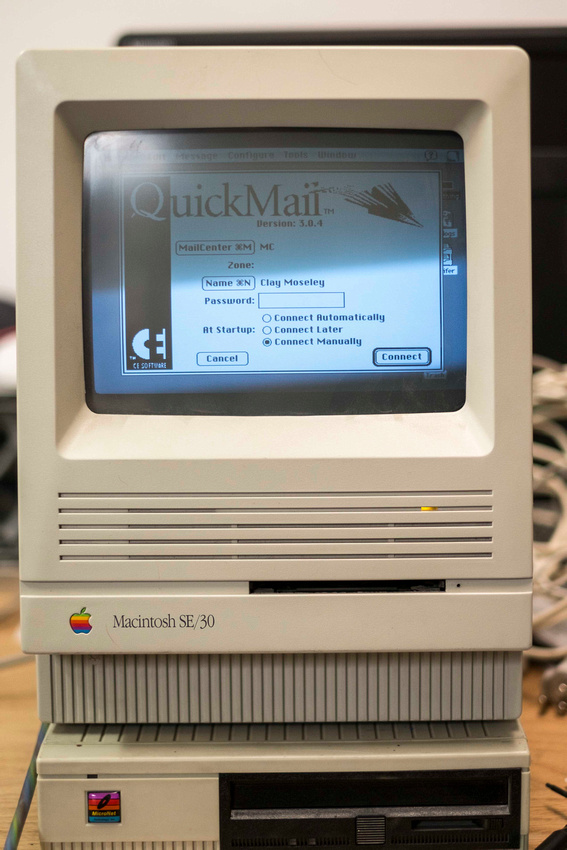 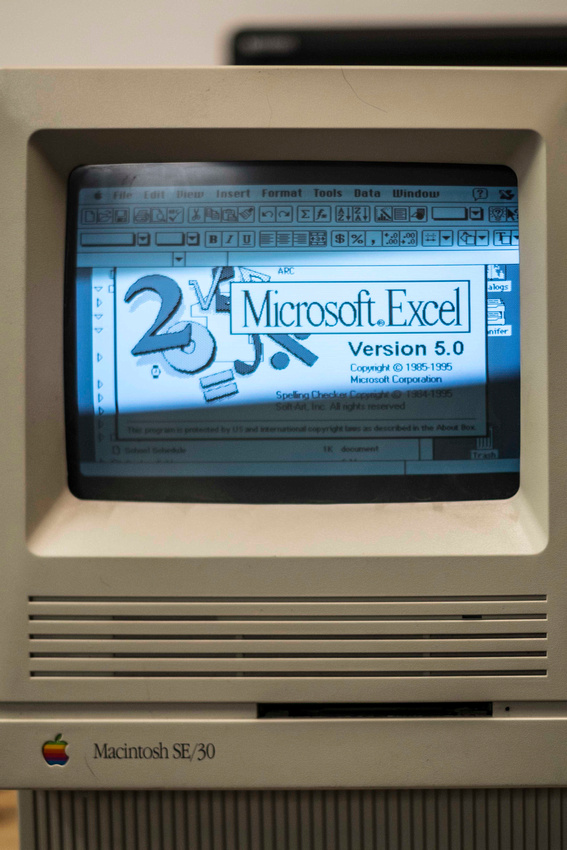 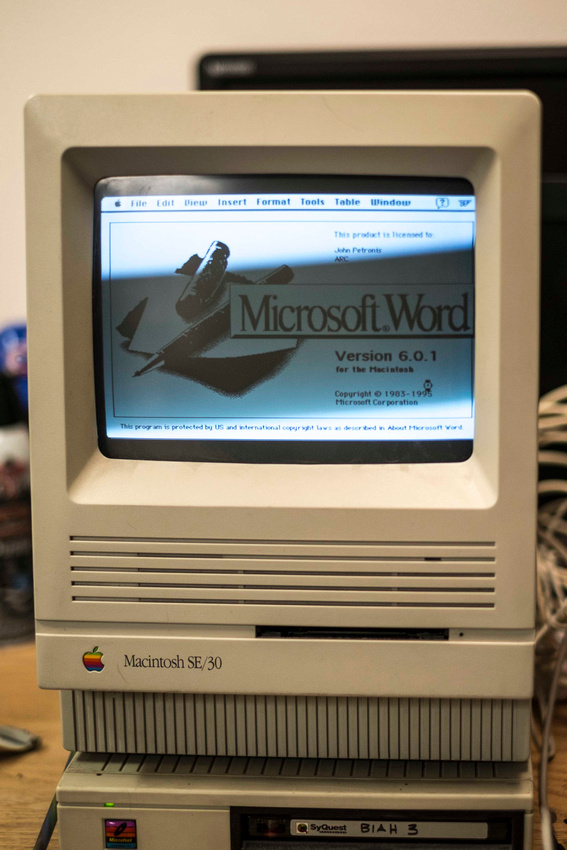 This Macintosh SE/30 was very generous as it was sharing the removable hard disk with cyber phantoms when I tried to eject it. 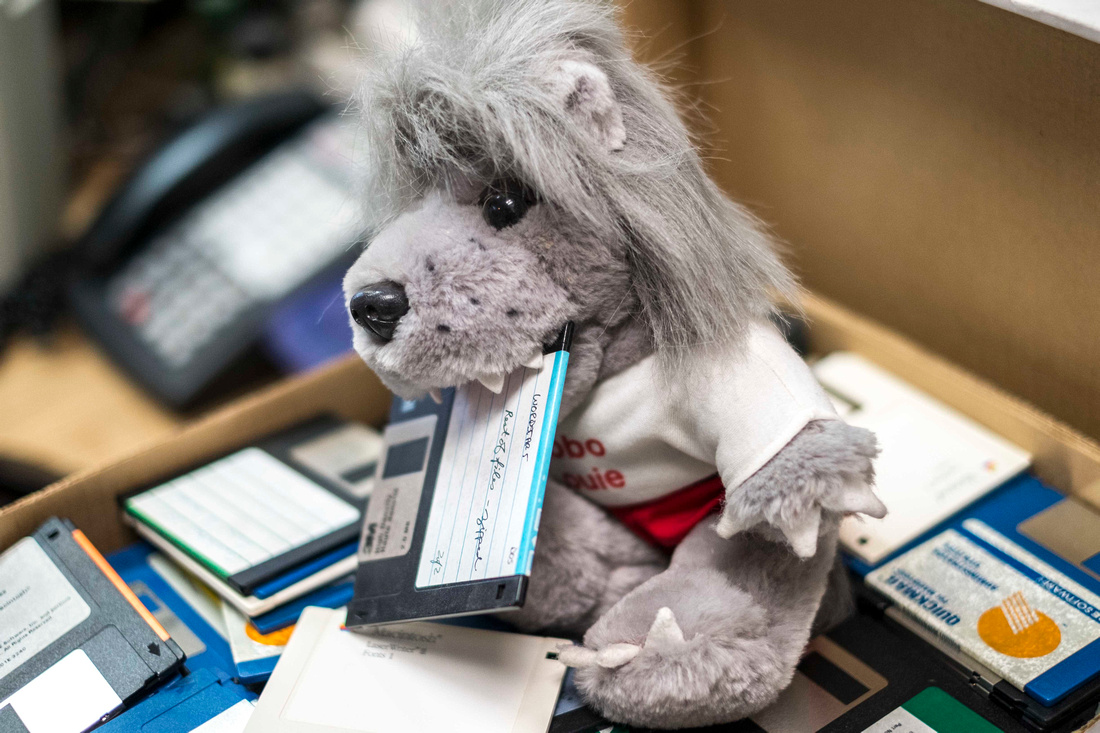 Lobo Louie volunteered to shred diskettes for us. Shredding diskettes is better use of his energy than attacking people.

T & L Photos
They do and did take a long time to boot. Thanks, Julie!
Julie(non-registered)
Oh what a blast from the past .. I could knit a cardigan while my computer was turning on! I can't believe how slow it was .. ha ha
T & L Photos
Thanks, Christine.
Christine Robinson(non-registered)
Wow, you know your stuff with computers, Tim! Plus you think it's fun! A definite techie! I remember my old Apple computer back in the 90s, and a dot matrix printer. All my graduate school work done tediously! What a difference today! Christine
T & L Photos
Hi Lavinia! It's kind of funny how we hold on to old hardware and software.
No comments posted.
Loading...
Subscribe
RSS
Recent Posts
Last Post on Zenfolio Walk, Run, Splash, Fly A Walk in the Snow We Wish You a Merry Catmas Cranes, Train & A Full Moon on Winter Solstice I Had A Dream Shrink Wrapped Fly Away Fire & Phantasm First Snow on the 2nd
Archive
January February March April May June July August September October November December
Timothy Price
Powered by ZENFOLIO User Agreement
Cancel
Continue