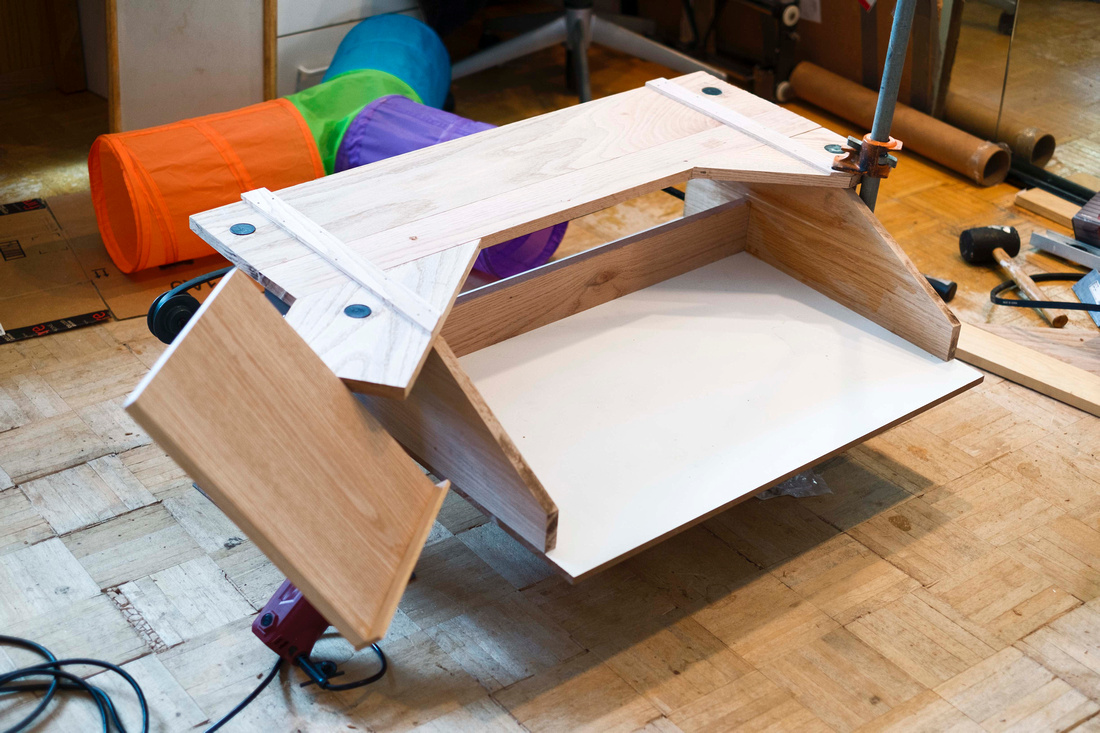 My latest sit / stand desk has been much more of a challenge than the enlarger based desktops I've built recently, because it only needs to raise up six to eight inches for the staff member who asked for it, but it still needed to have a motorized lift. She couldn't use a pull-up type desktop because it would put too much stress on her back, and she couldn't use a manual turn to wind it up and down because of hand issues. The  enlarger frame model I've been making would be overkill, and nothing in a reasonable price-range is available that is motorized.  So, I modified a pair of scissor jacks to be the lifts, and originally rigged up an extra motor I had from an enlarger chassis to power the jacks, but it couldn't lift the weight, so I had to rethink my motorized lift.

I remembered a Youtube video of Red Green making automatic power windows for his van using an electric mixer, the light bulb came on, and I figured a drill would work. Check out the Red Green video Red Green Handyman Tip - "Power Windows" (1999) it's great. I attached a drill to the arbor I had rigged on one of the scissor jacks, and it ran the rig up and down with ease. I set a board across the jacks, set 70 pounds of kitty litter on the board, and the drill easily lifted the kitty litter. That solved the problem of the motor, but I needed a close quarter reversible drill, because it is more compact than a normal drill. My drills are powerful, 7.5 amp drills, and 6 amp reversible close quarter drills were in the $250 to $300 range — more than all the materials in the desktop. I searched around on the web and found a 3.5 amp reversible close quarter drill on sale at Harbor Freight for $30, and, low and behold, the local HF had them in stock. I figured $30 was worth a try. It turned out that 3.5 amps is plenty of power, because the drill had no problem providing enough power to lift 70 pounds of kitty litter.

As I was finishing up the last few details on the desktop before taking it out to sand and varnish the oak, I put my hand on the top to stand up and the piece of oak on the right hand side split. That was unexpected, but I was glad it happened before I had taken the desktop to the office and got it all set up. I glued and clamped the side piece, and now I need to make brackets for each side to keep the sides from splitting again since both sides are from the same piece of oak. While I had the desktop in a lifted position while the clamp was on it, Lola and Spunk gave it the kitty test, and checked it out to make sure it was kitty worthy before I finish the desktop and take it to the office. 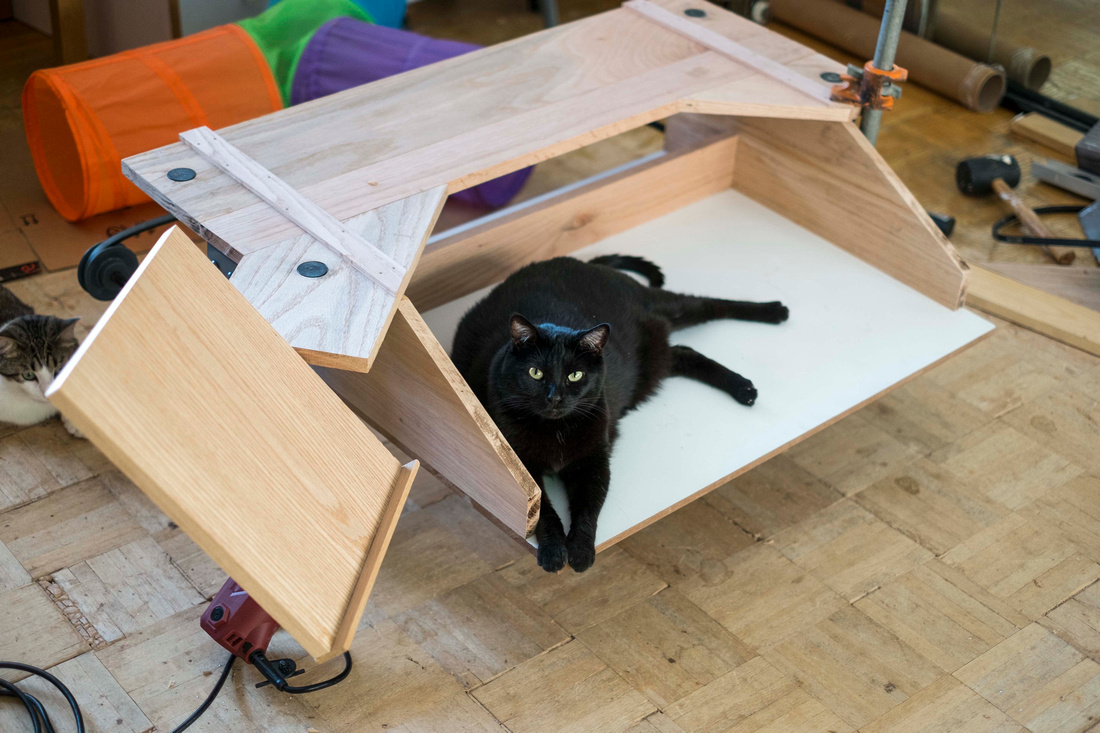 Lola giving it the lounge test 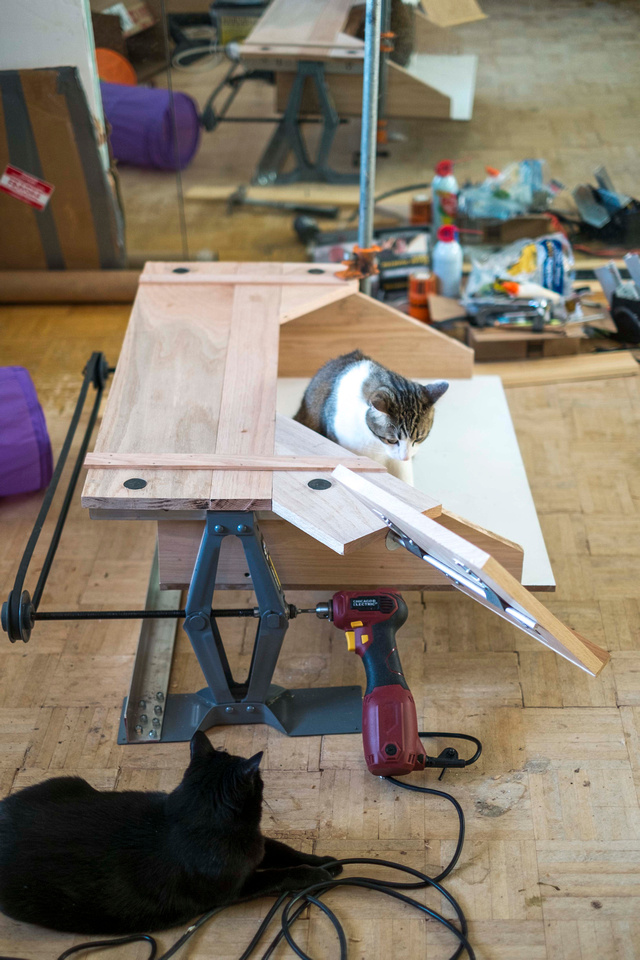 Spunk checking it out while Lola watches 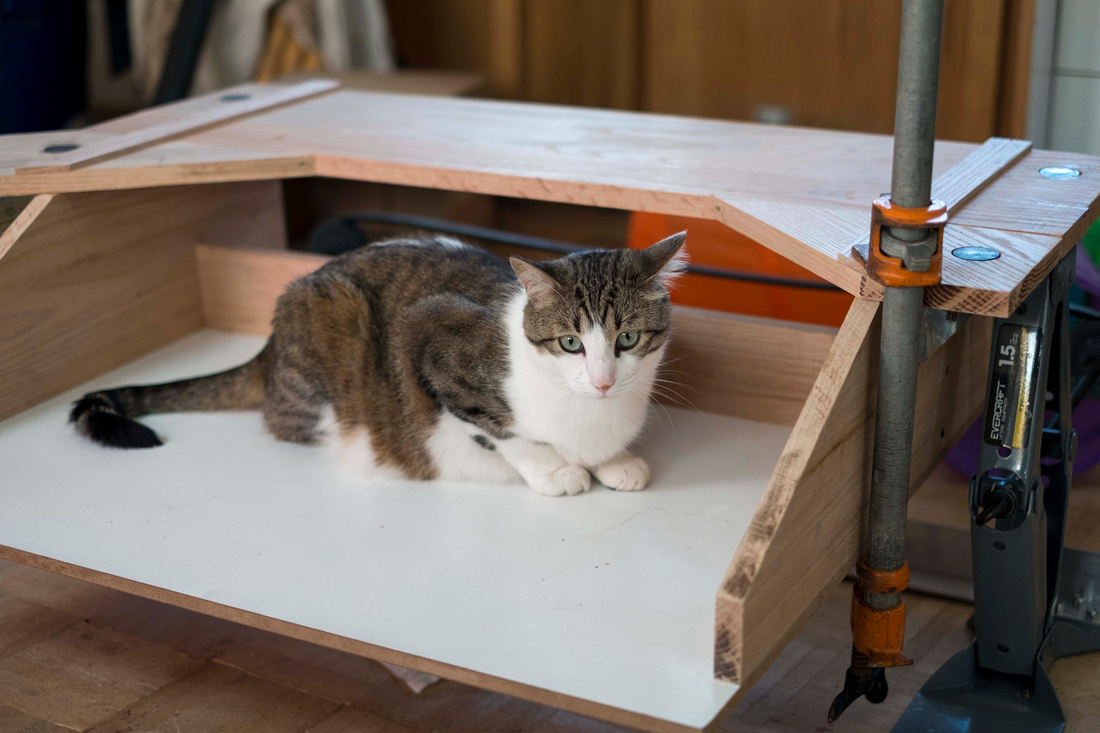 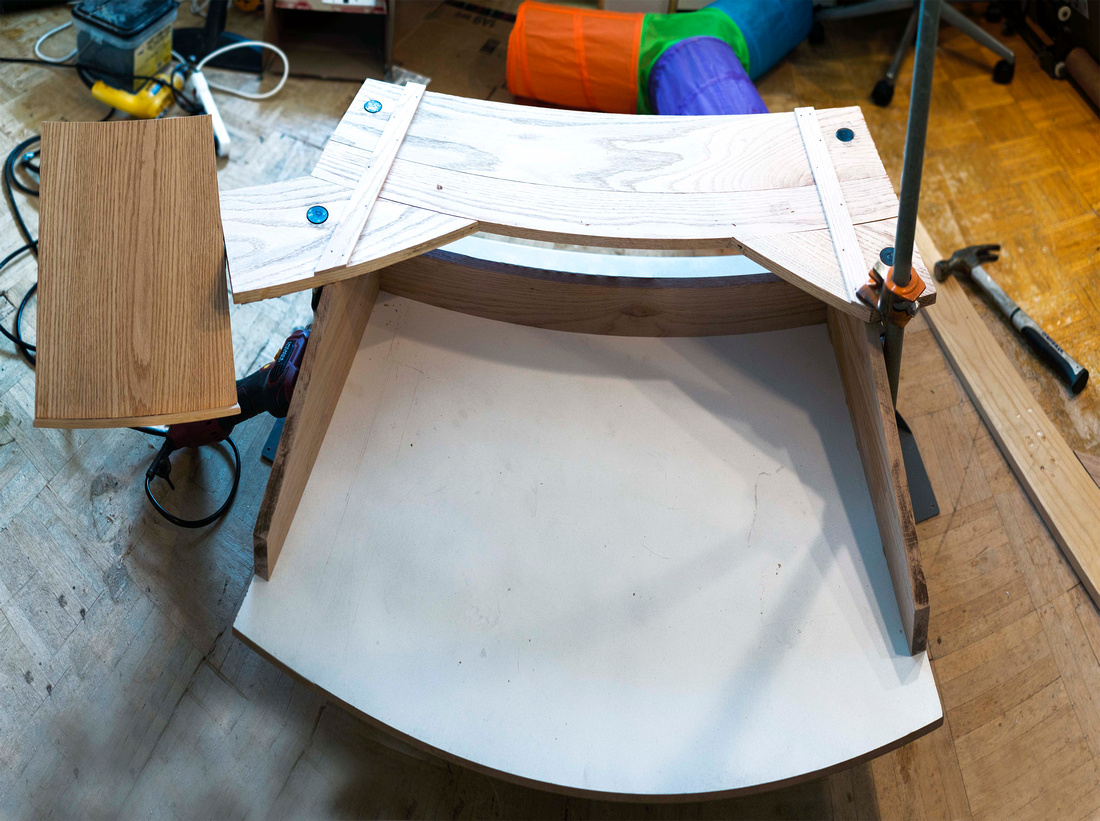 A wild wide-angle view of the desktop

T & L Photos
Thanks, Julie! You can get the desktops that pull up into standing position.
Julie(non-registered)
You are clever! I really would love one of these and I know my back and neck would be much better off. Thanks for the reminder
T & L Photos
Thanks, Lavinia! I get lots of kitty help. Red Green is really funny. You should check out more of his videos. Like he says &quot;If the women don't find you're handsome, they should at least find you're handy!&quot;
Lavinia Ross(non-registered)
I liked the Red Green video. Never heard of him before. Quite a resourceful fellow! That was a great idea with the drill for the desk lift. You have such willing kitty testers, too! I am always amazed and admire your own ingenuity and resourcefulness.
T & L Photos
Thanks, Susan!
No comments posted.
Loading...
Subscribe
RSS
Recent Posts
Last Post on Zenfolio Walk, Run, Splash, Fly A Walk in the Snow We Wish You a Merry Catmas Cranes, Train & A Full Moon on Winter Solstice I Had A Dream Shrink Wrapped Fly Away Fire & Phantasm First Snow on the 2nd
Archive
January February March April May June July August September October November December
Timothy Price
Powered by ZENFOLIO User Agreement
Cancel
Continue