What to Do on a Rainy Day 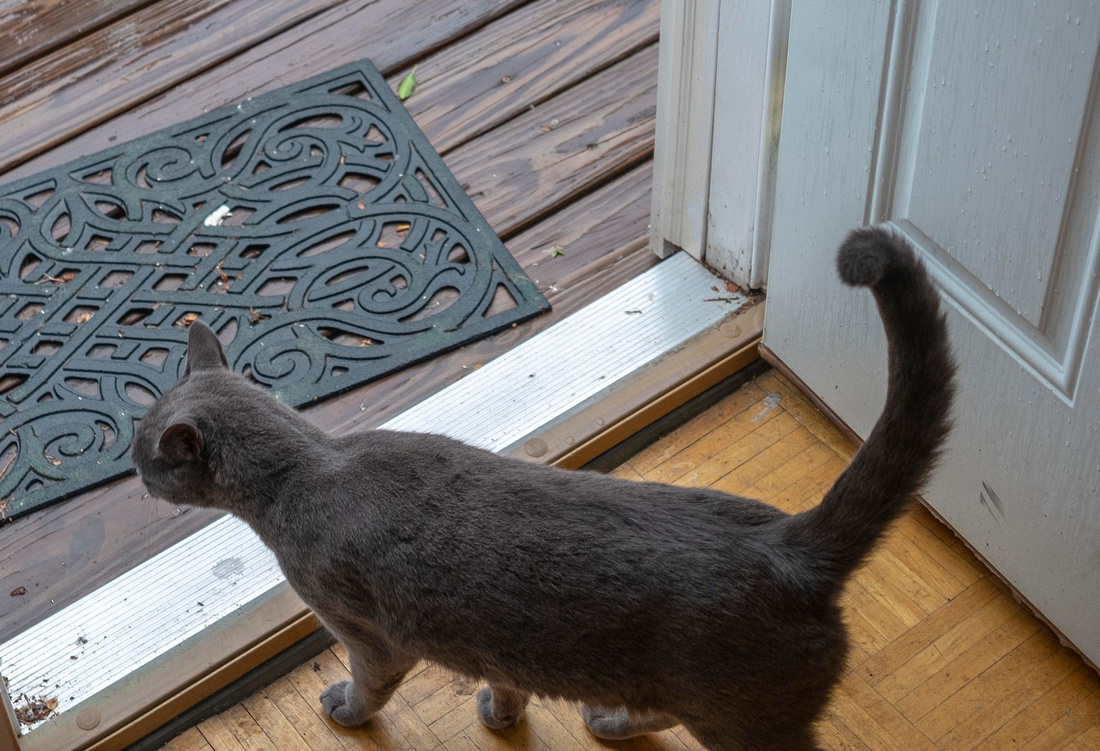 Silver checking to see if it's raining on the west slide of the house.

Anyone who follows this blog knows we get very little rain in the high deserts of north-central New Mexico. We have gone for months without measurable precipitation, drought conditions are severe, and the Forest Service closed the Sandias on Thursday because risk of fire is really high. We had a bit of rain that lasted around 30 minutes last Sunday. Starting very early this morning, rain moved in, and, as rarely happens around here, we had a steady rain that lasted most of the day. Silver was very unhappy about the rain on Sunday, and today he was beside himself. He would go out on the deck where he could lie on the deck furniture under the canopy, but if he tried to venture out to his favorite places in the yard, he got wet. He kept coming inside and having me open the front door to see if it was still raining on the west side of the house, which is not as silly as it sounds, because we have had rain on one side of the house and dry on the other many times. That's just life with rain the southwest, where we can have full sun and a downpour, overcast and rain on one side of a building and sunny and dry on the other all at the same time.

Eventually, we all sat out on the deck under the canopy, and watched and listened to the rain while the kitties groomed themselves and each other. The kitties' licking gave me an idea for a parody music video, which turned out to be a fun thing to do on a raining day. You can see "Whole Lotta' Lickin' Goin' On", along with the lyrics after the last photo of Silver checking to see whether the weather is permitting. 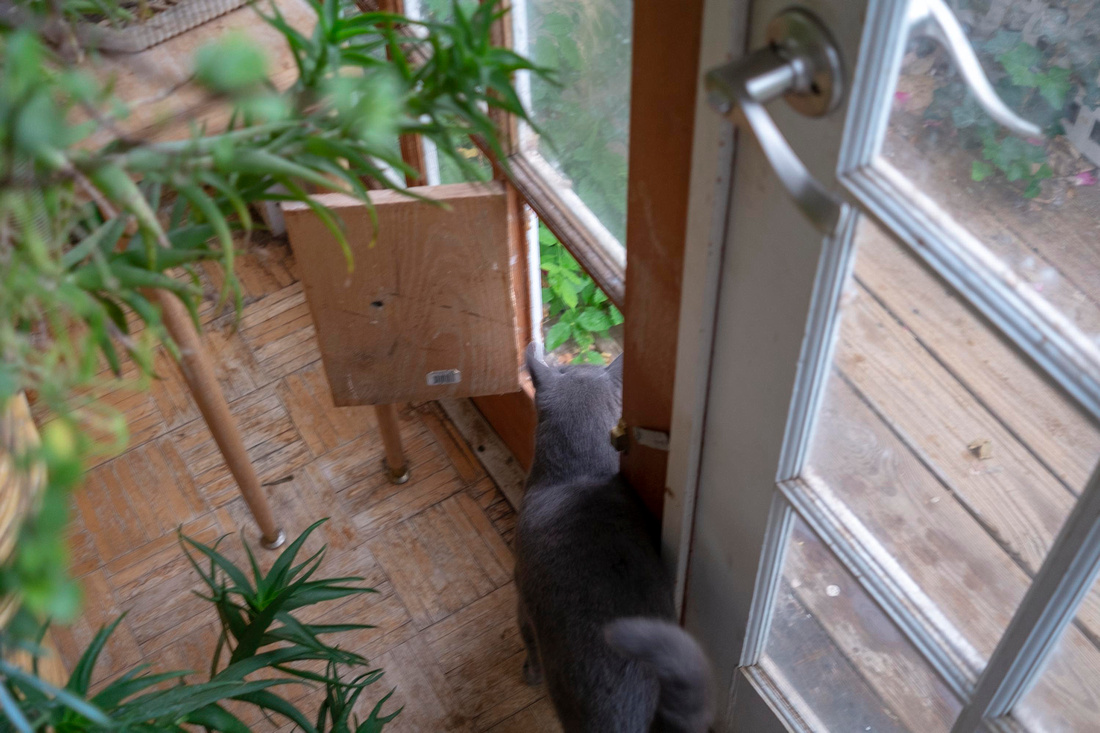 Silver thinking about going out on the deck. 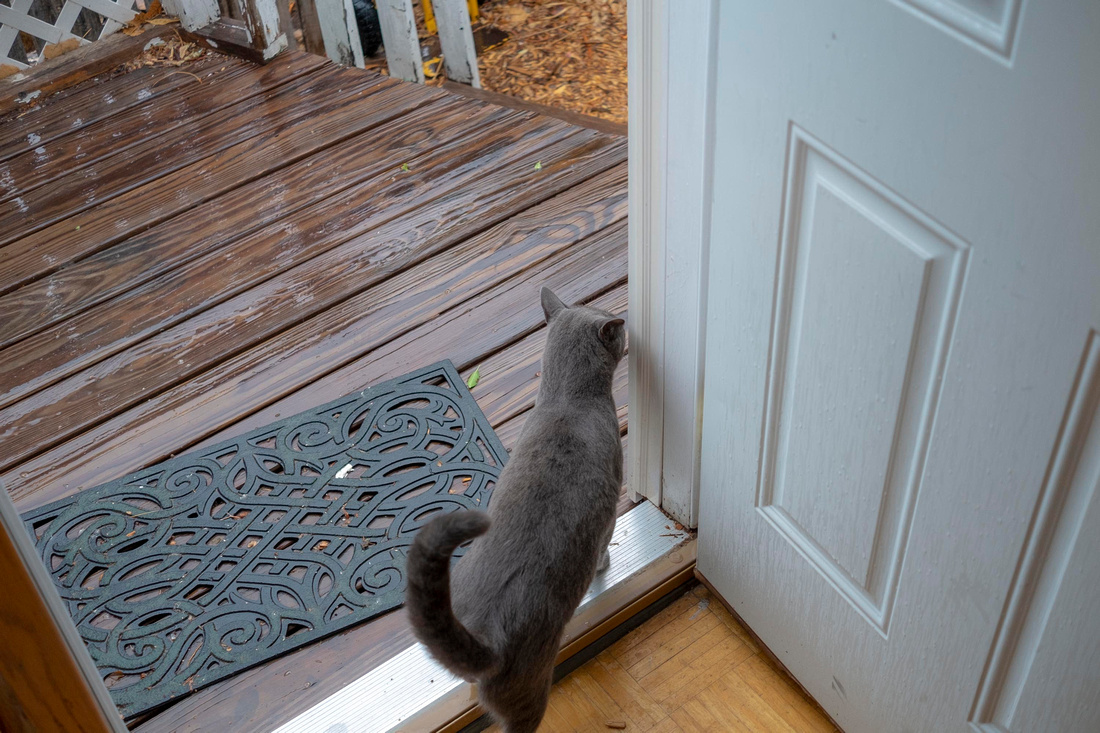 Silver deciding whether he can go out in the weather.

Easy now
lick it
Ah, lick it, kitty
Yeah
You can lick each other one more time
Ye-ah-ha-ah, I said come on over, kitties
Whole lotta’ lickin' goin' on
Now, kitties get down and lick one paw now
lick, kitty, lick
All you gotta do, kitty, is kinda lie in one spot
Wiggle around just a little lick, that's when you got it, yeah
Come on kitty, whole lotta’ lickin' goin' on
Now let's go one time

T & L Photos
Hi Vanessa. The calico is Marble. I think that's the name you gave her. Hi Ho Silver got shortened to Silver, and Loki was more fitting than Midnight for the black kitty's trickster personality.
Vanessa(non-registered)
Spunk, Silver, Loki(sp?), and all kitties look exceptionally happy. What did you name the calico?
T & L Photos
Thanks, Lavinia! The rain was forecast, but it's always a bit of a surprise when it really happens.
Lavinia Ross(non-registered)
Silver is such a handsome cat, and those are great lyrics,Tim!

We had a surprise rainstorm the other day here, a rather large front that was not in the forecast. Fortunately no hail.