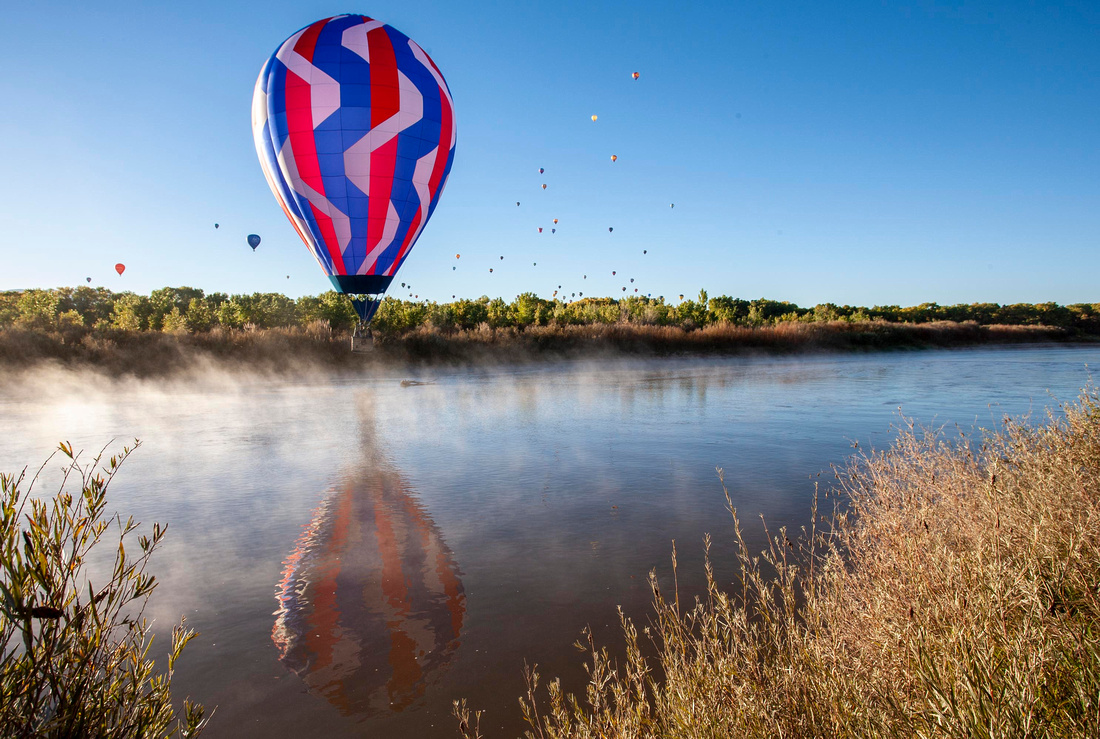 The Rio Grande is very low, and reflective.

The 47th Annual Albuquerque International Balloon Fiesta kicked off today with major traffic snarl starting in the wee hours of the morning. Our intention was get to the field by 5:30 am so we could get on the list for a balloon ride. However, it seemed all of Albuquerque wanted to get on the field this morning and the cars were backed up for two or three miles in every direction. I determined we were not going to get on the field before 6:00 am, let alone 7:00 am, before the balloons would launch. I managed to get out of the traffic jam, and took the long way around to get back home. We walked out on to the river, watched and photographed the balloons in the sky with a few touching down on the water and mudflats, while kayakers, canoers, and paddle boarders floated down the Rio Grande, often getting stuck in the shallow places along the way. 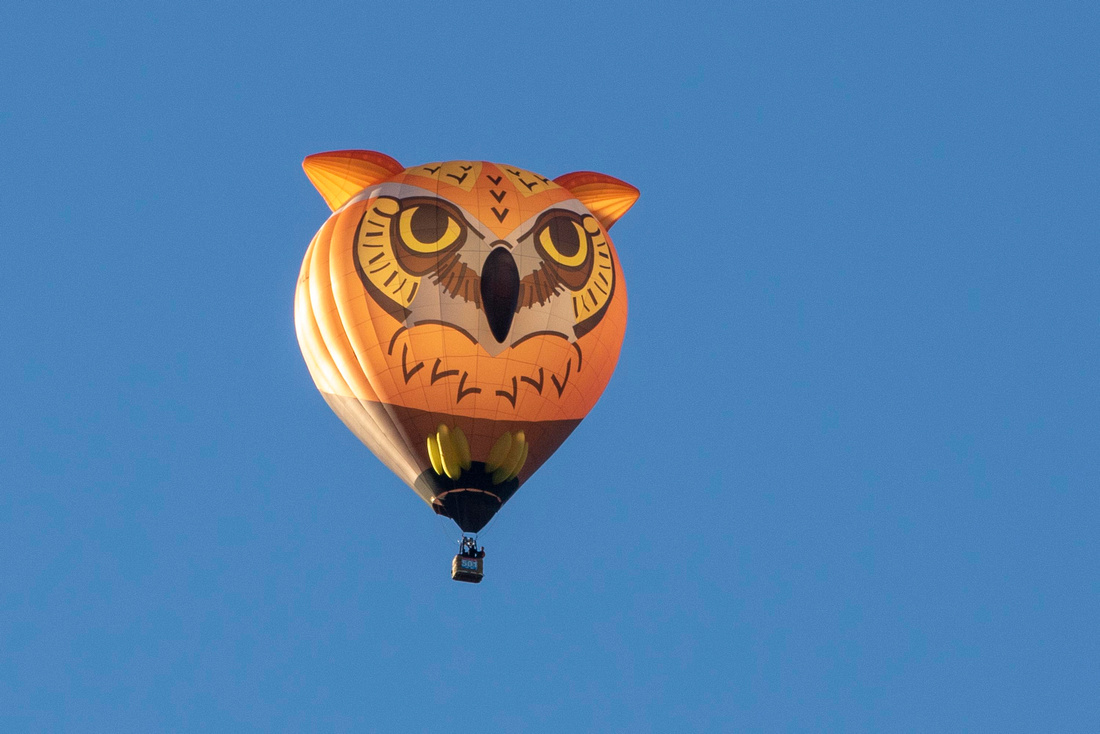 This is the first time I'd seen an owl balloon. I was hoping it would land in the river, but it flew over us to the west and disappeared behind the trees — typical owl behavior. 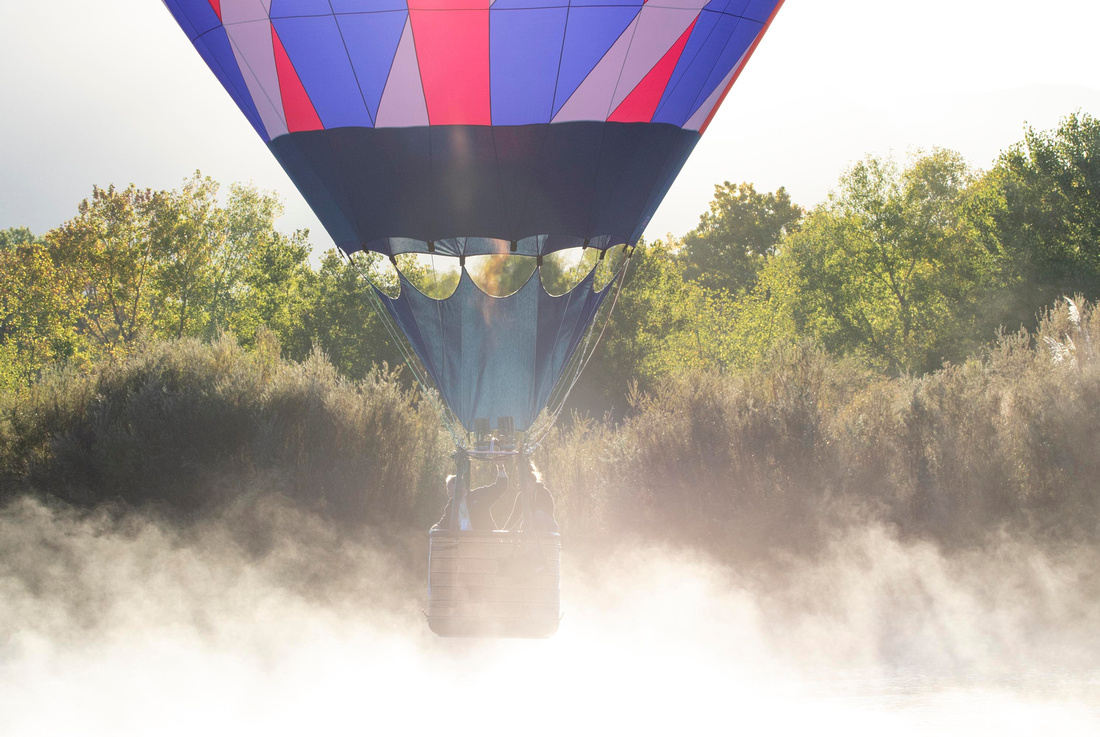 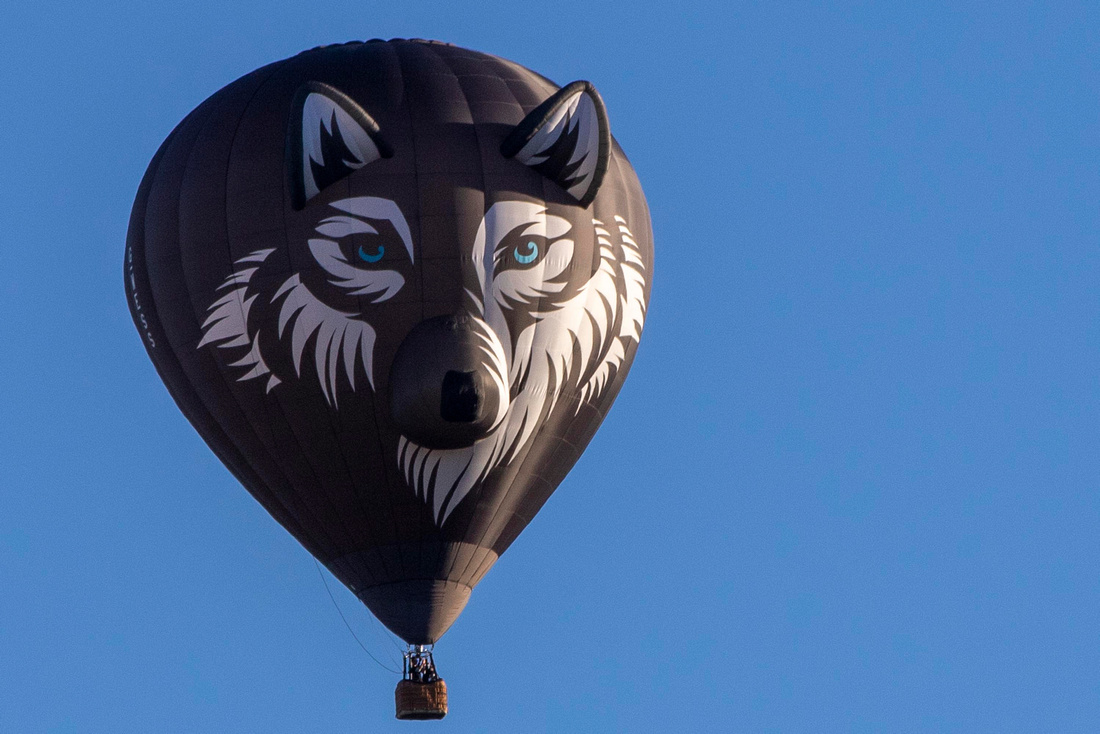 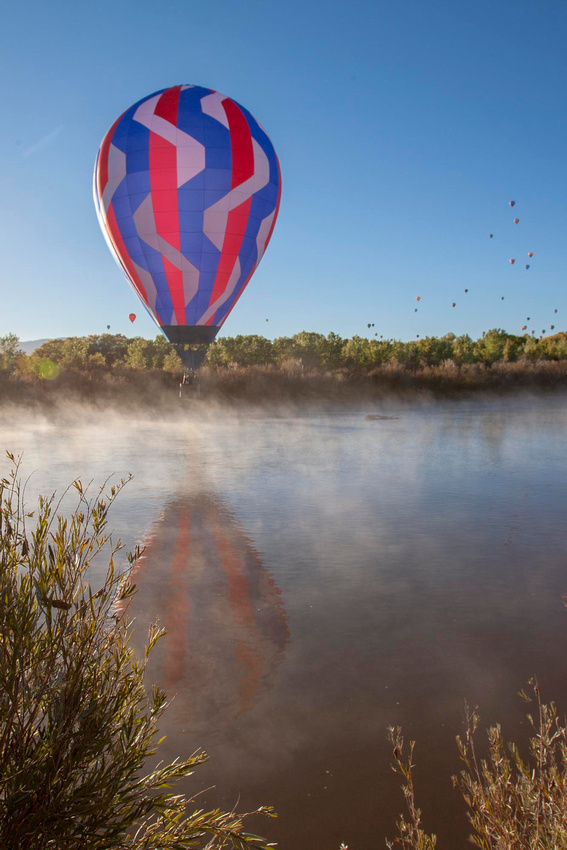 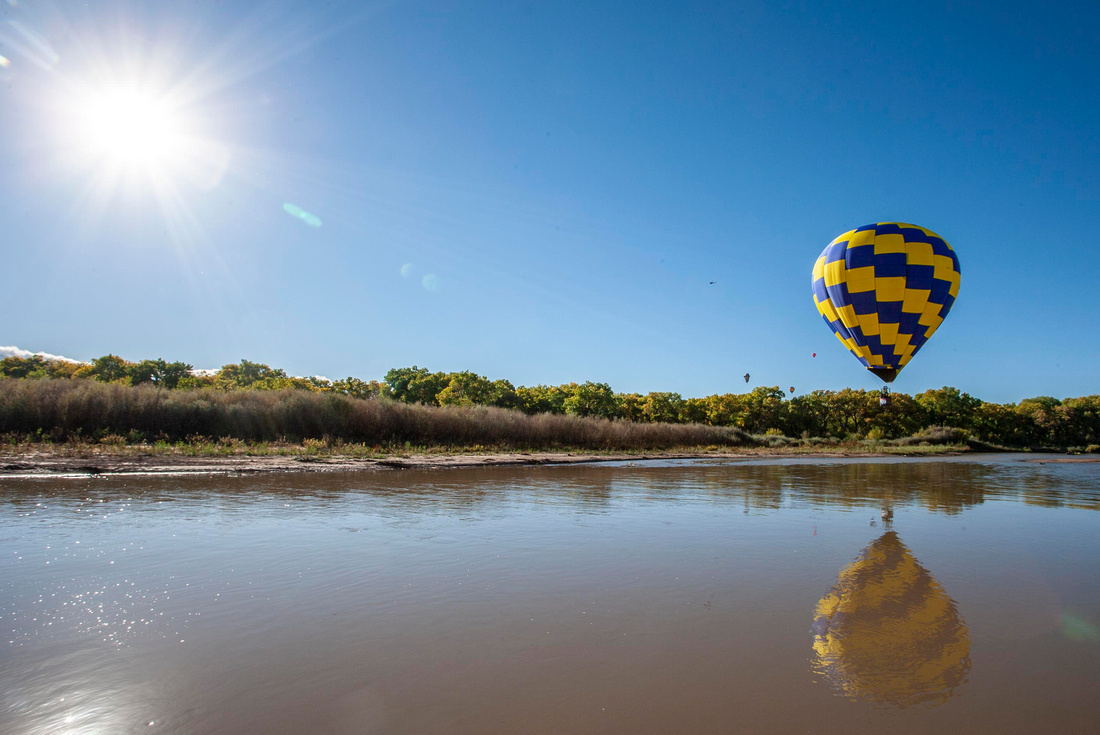 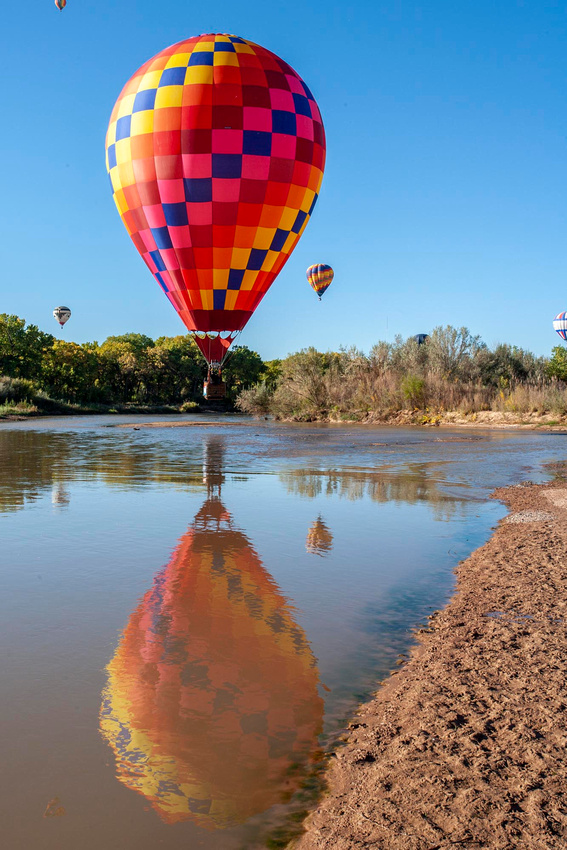 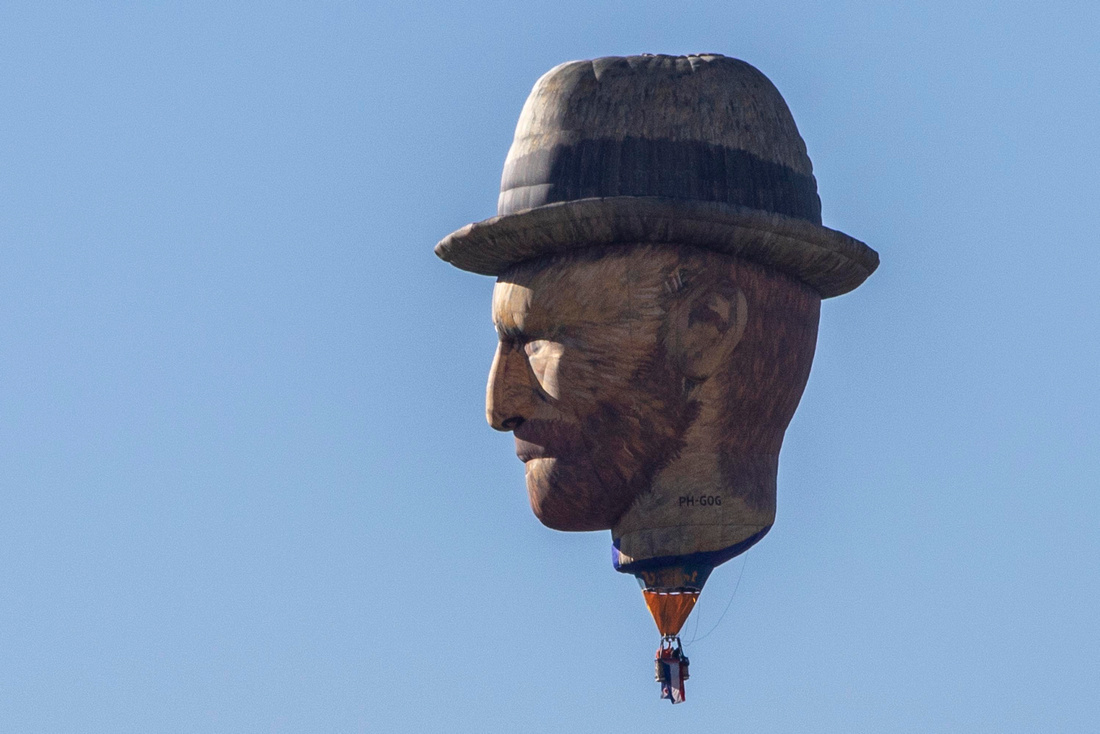 The other people on the river told me I was occupied photographing other balloons when Van Gogh was facing us, so I only ended up getting him in profile. 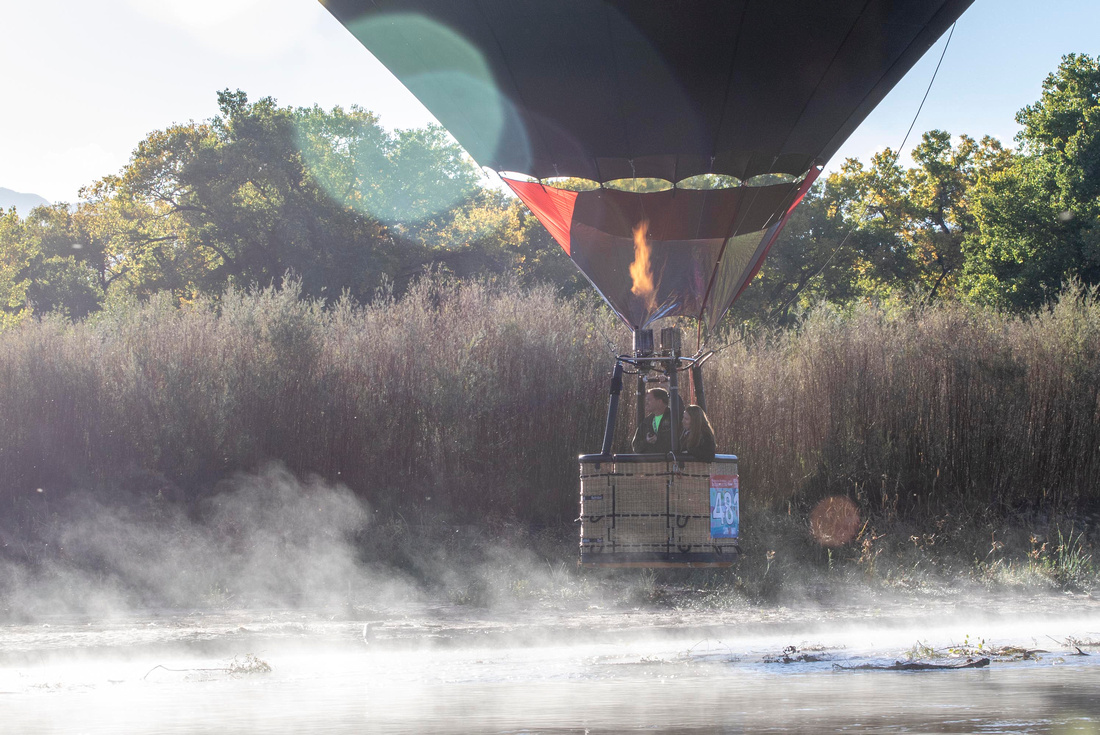 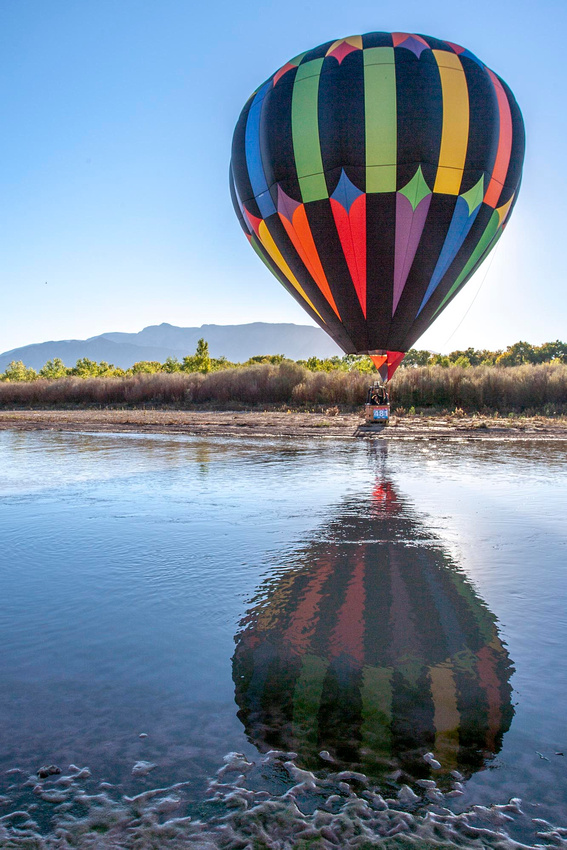 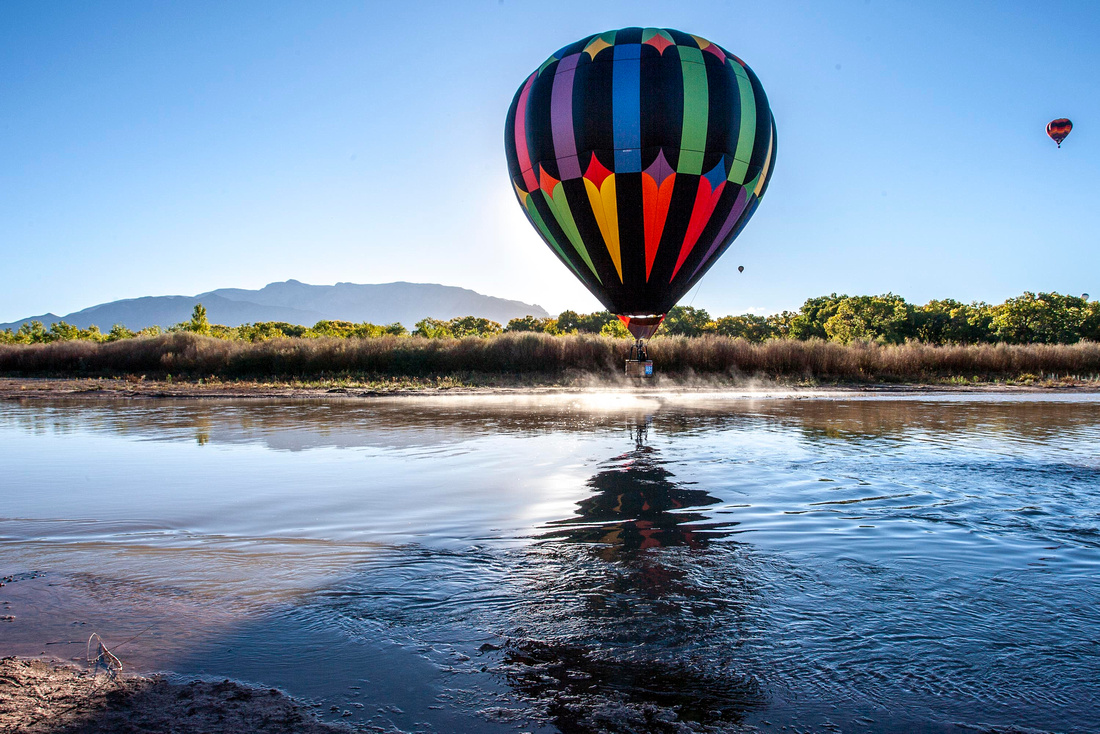 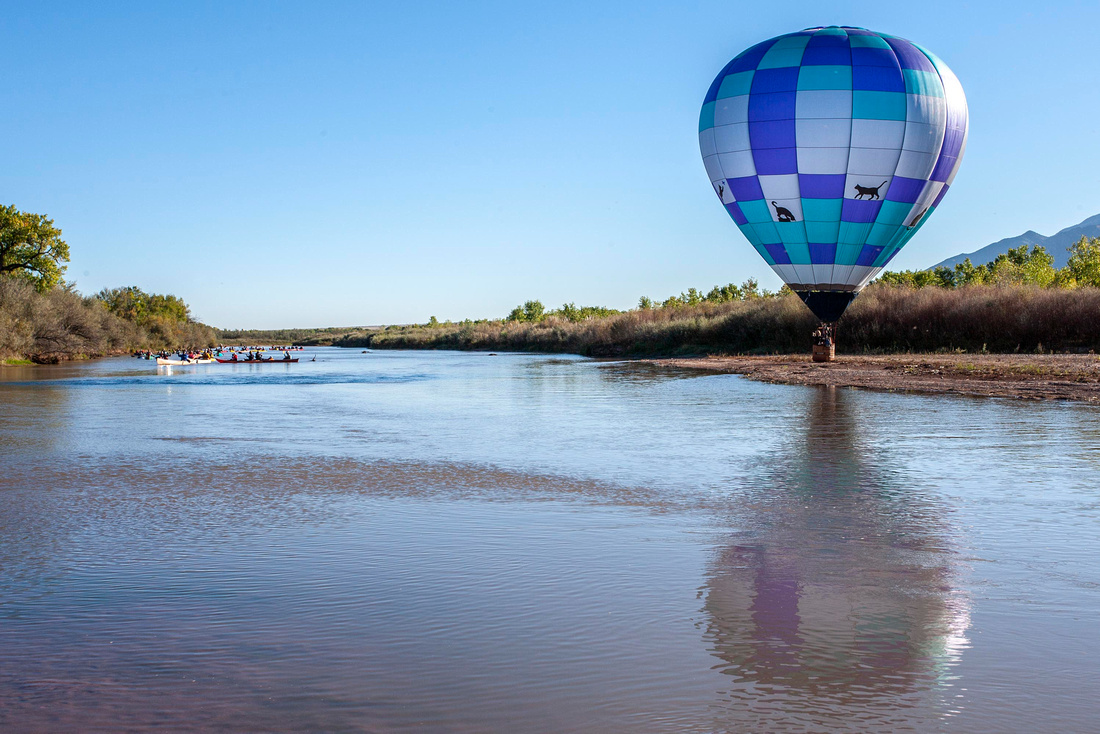 Kitty balloon across from the paddlers. 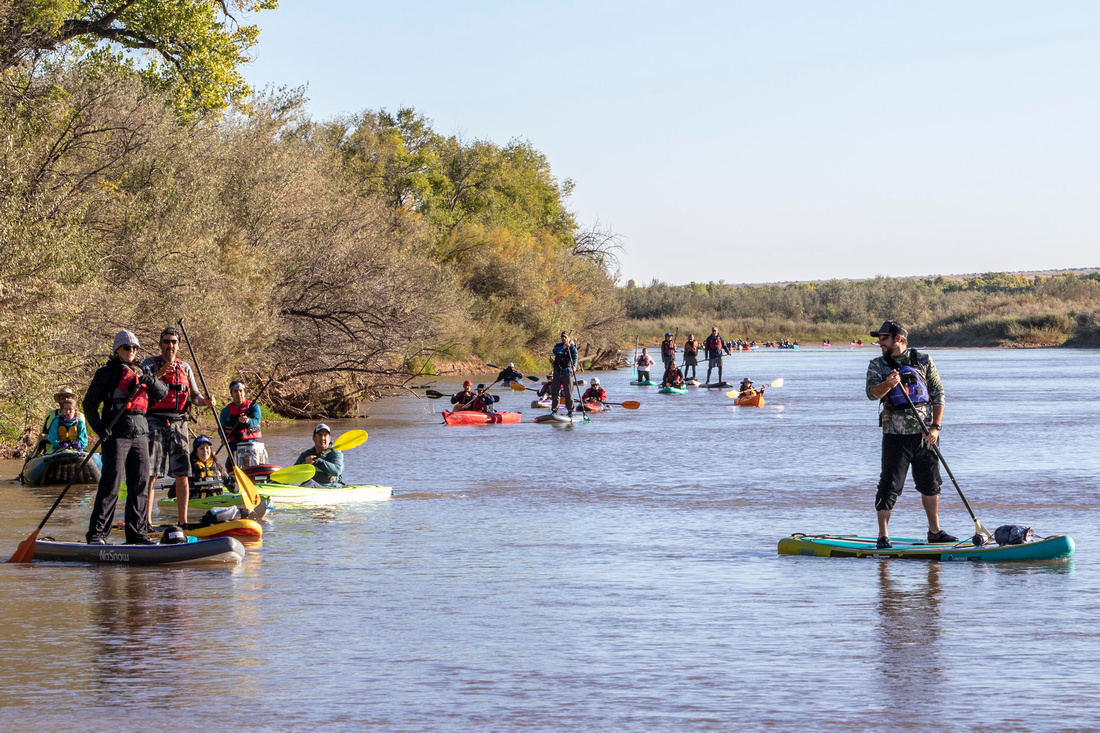 The lead flotilla of the "Spanish Armada" of kayaks, canoes, and paddle boards that followed. 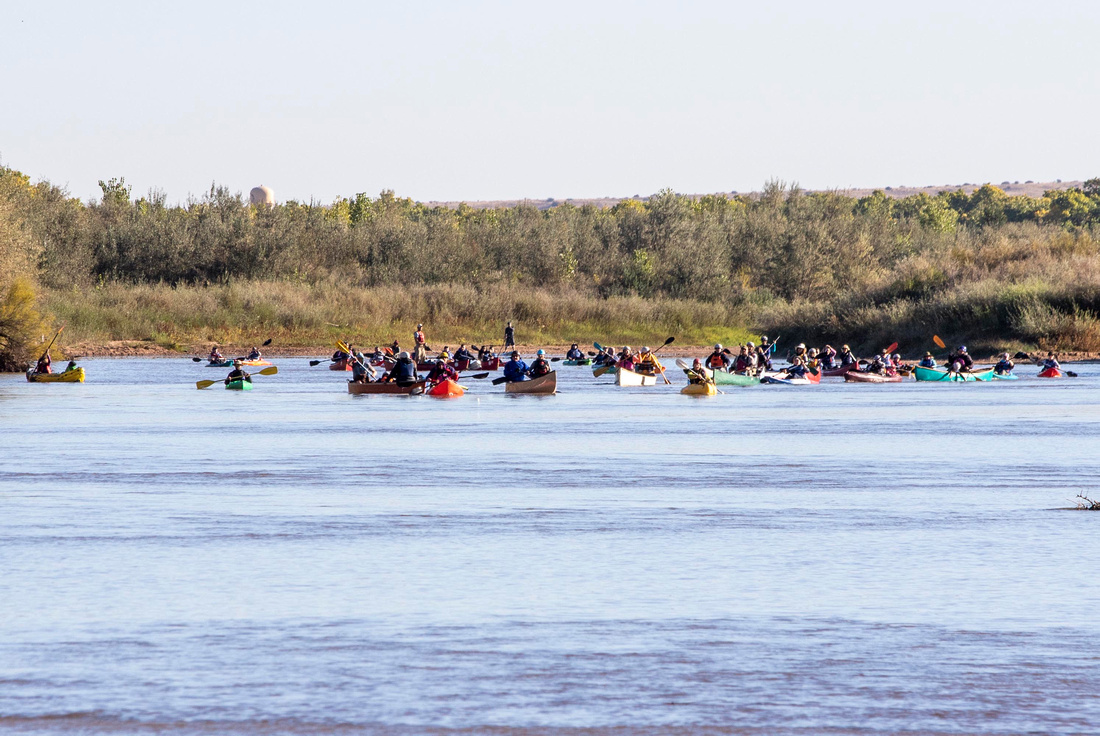 The armada heading our way. 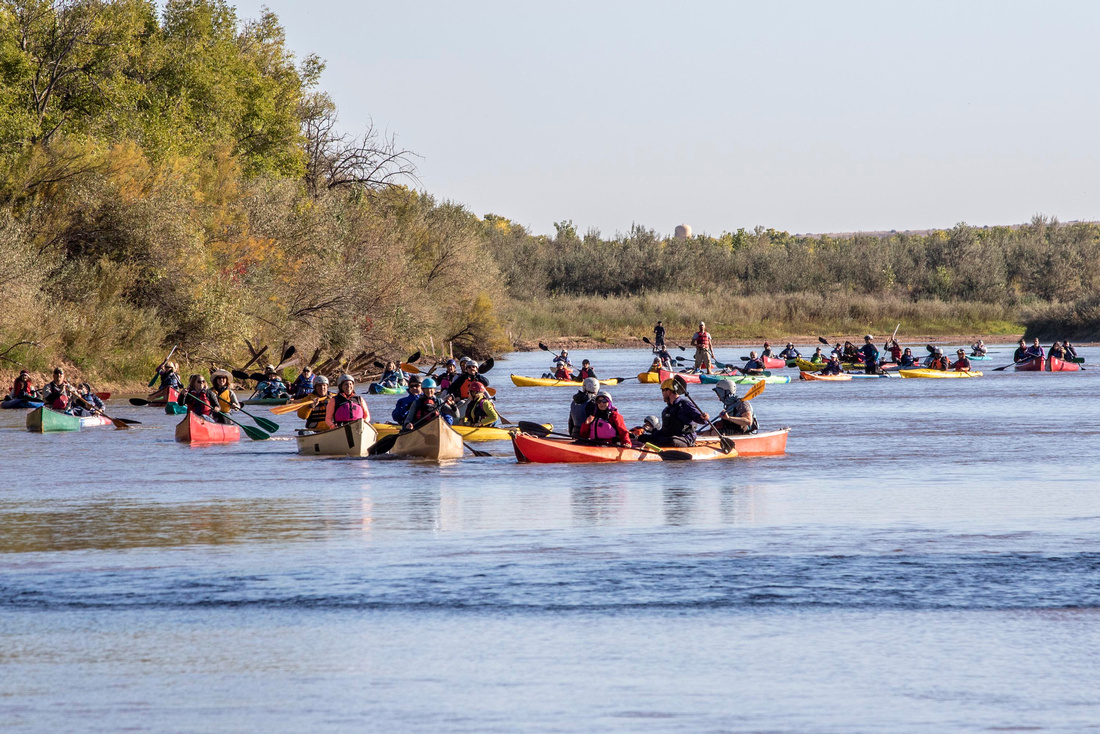 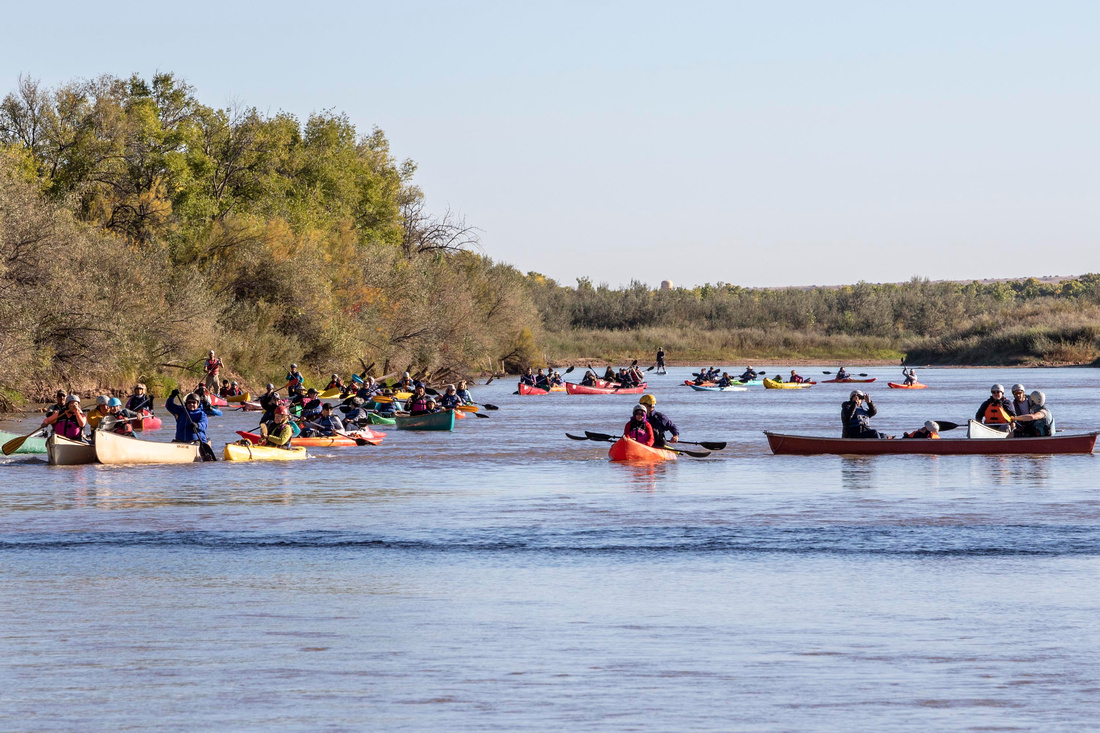 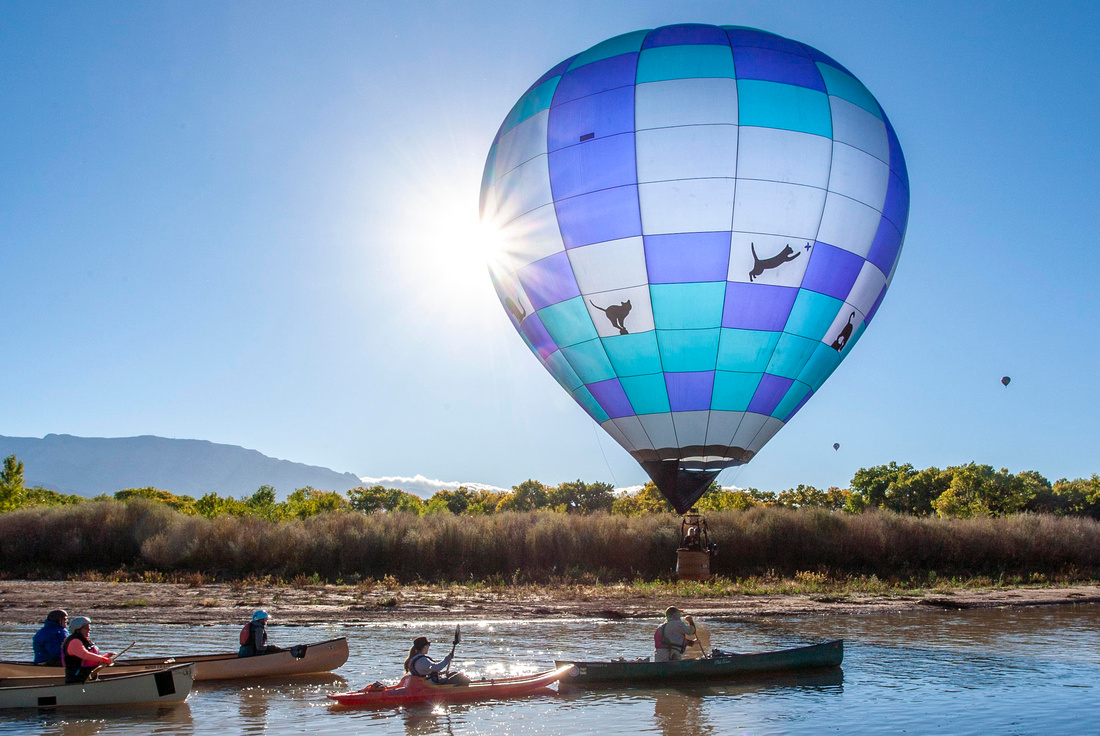 They overtake the kitty balloon. 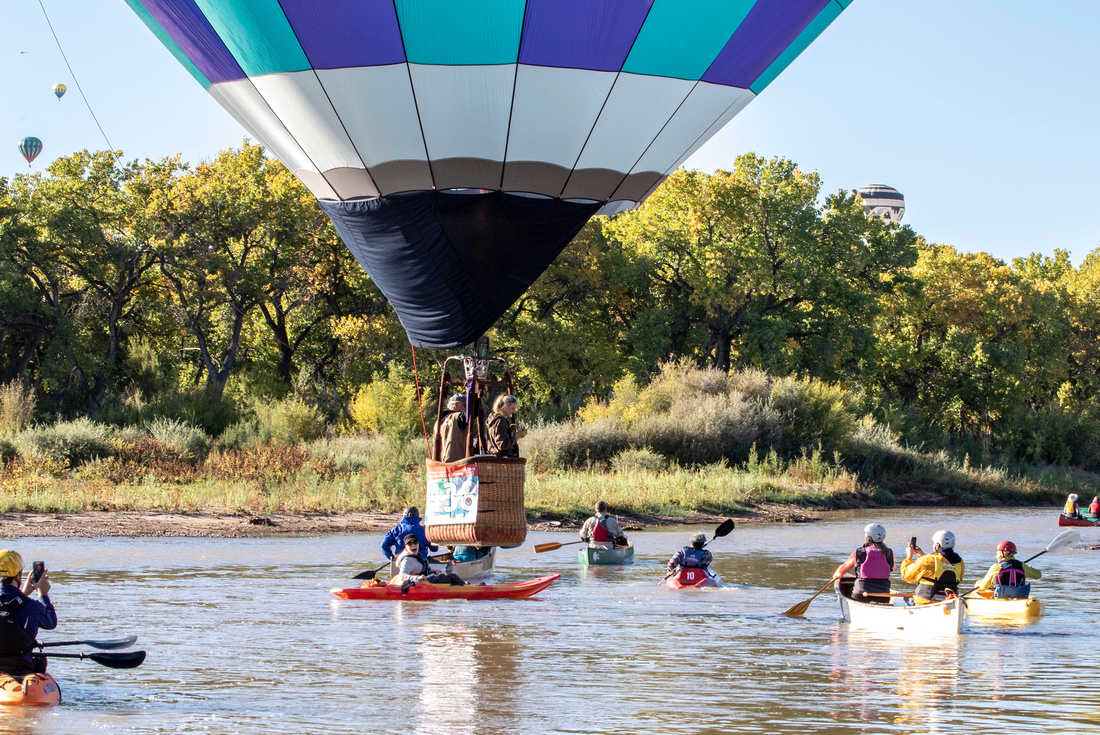 The kitty balloon buzzes the paddlers. 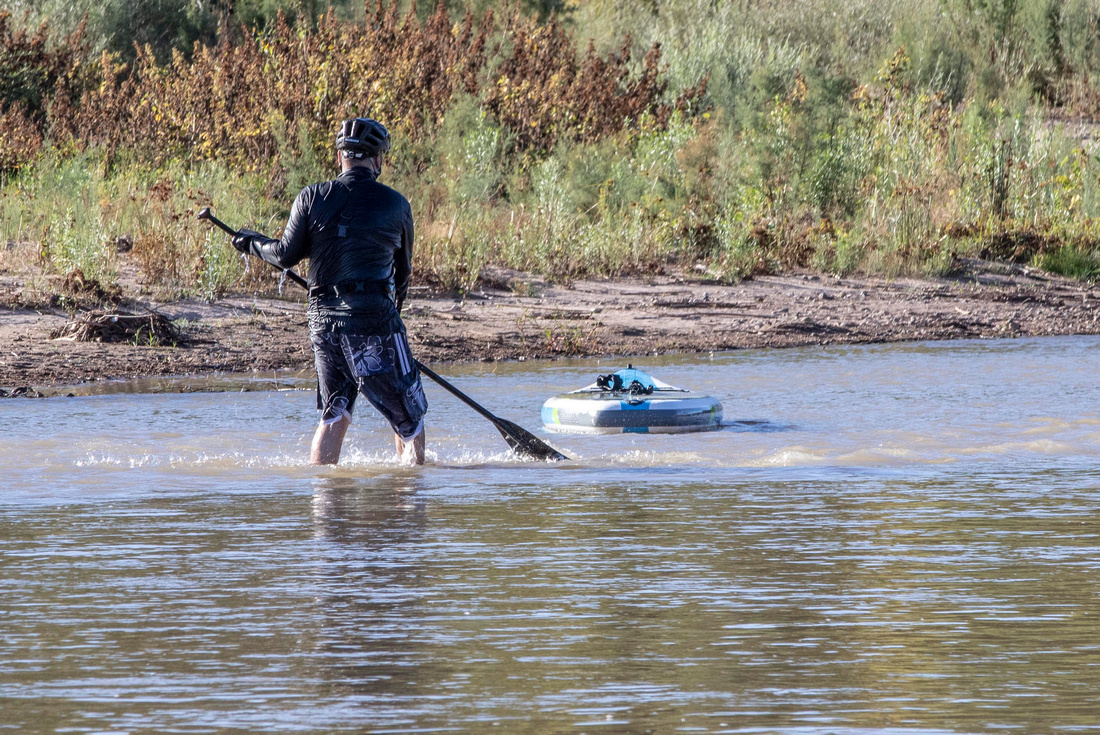 The last paddle boarder fell off his board and got swamped. He was still chasing after the board when he rounded a bend in the river and disappeared. We visited with other people on the river for a few more minutes and then walked home.

T & L Photos
Thanks, Harry!
Harry(non-registered)
3 blogs at the same time, you have been very productive :-)
T & L Photos
Thanks Gerald. Turns out the owl balloon is from Great Britain.
T & L Photos
Thanks, Guyanne.
T & L Photos
So many of them together is really impressive. Thanks, Herman!
No comments posted.
Loading...
Subscribe
RSS
Recent Posts
Last Post on Zenfolio Walk, Run, Splash, Fly A Walk in the Snow We Wish You a Merry Catmas Cranes, Train & A Full Moon on Winter Solstice I Had A Dream Shrink Wrapped Fly Away Fire & Phantasm First Snow on the 2nd
Archive
January February March April May June July August September October November December
Timothy Price
Powered by ZENFOLIO User Agreement
Cancel
Continue