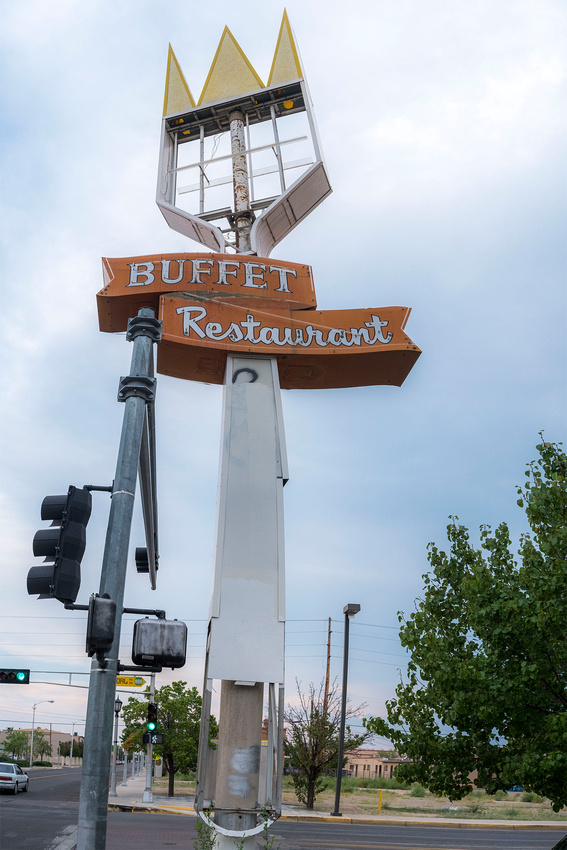 This is one of the tacky old landmarks that persist in Albuquerque. The Royal Fork Buffet Restaurant was at the corner of 4th and Coal in downtown Albuquerque. The restaurant opened around 1968, and closed in the late 1970's or early 1980's. While we had gone there a few times when I was young, other than the sign, it wasn't really memorable. In trying to find the history of this particular Royal Fork, I saw one reference that said the sign was from 1960, but the first Royal Fork Buffet Restaurant opened in Idaho in 1967.

T & L Photos
Hi Gerald. In the USA they started in 1967, and most closed by the 1980's. There are still a few open in a couple of cities. It was supposed to be a higher quality version of the cafeteria or "Smorgasbord" style eateries in the 1960's. The guys who started the Royal Fork chain had McDonald's franchises to begin with.
Gerald Chambers(non-registered)
I found this comment about the Royal, Tim. Sounds like they weren't so hot? Hehe!
They may have closed in the 80s, but the Royal Fork's glory days were in the 60s or 50s...my mom remembered their all-you-can-eat buffet with a mixture of nostalgia and nausea...she liked to call it the "Royal Gorge",
T & L Photos
Hi Lavinia. Lucky you up until now that you have seen one.
T & L Photos
Hi David. We very rarely eat out, and never at buffets these days. I looked up what buffets we have in Albuquerque. There is a King's Buffet and a couple others like that, but most of the buffets around town are oriental.
Lavinia Ross(non-registered)
I've never seen one of these! An interesting bit of history from your area.
No comments posted.
Loading...
Subscribe
RSS
Recent Posts
Last Post on Zenfolio Walk, Run, Splash, Fly A Walk in the Snow We Wish You a Merry Catmas Cranes, Train & A Full Moon on Winter Solstice I Had A Dream Shrink Wrapped Fly Away Fire & Phantasm First Snow on the 2nd
Archive
January February March April May June July August September October November December
Timothy Price
Powered by ZENFOLIO User Agreement
Cancel
Continue