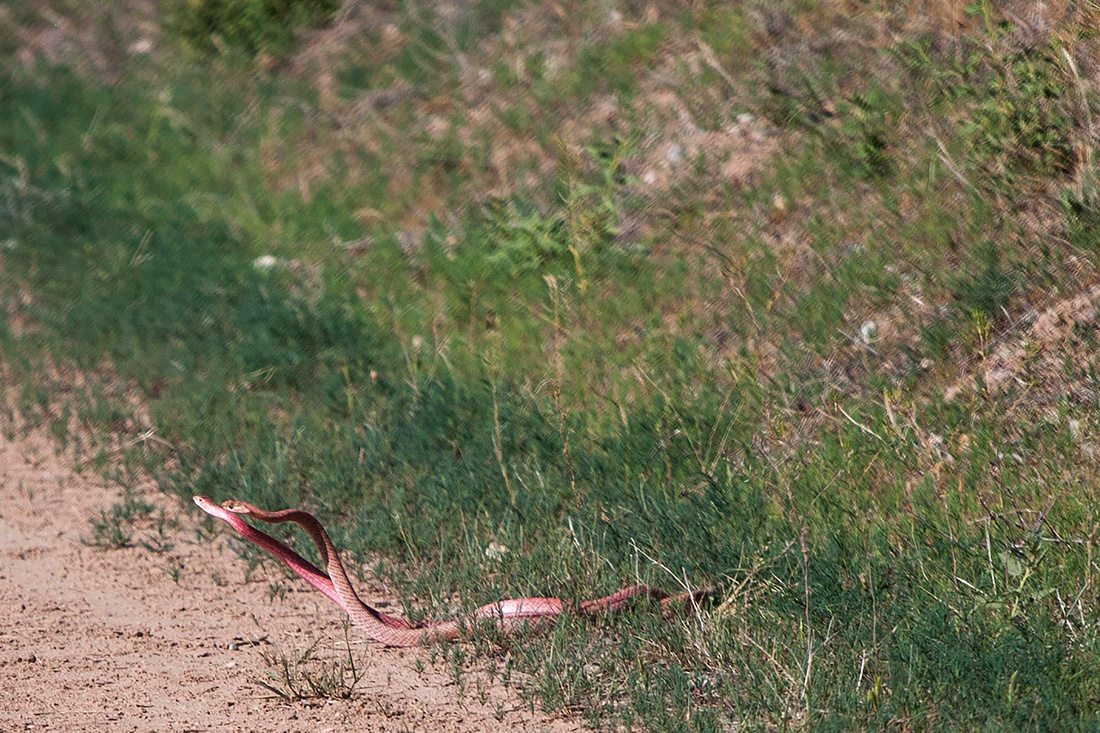 Laurie and I went for a walk on the ditch earlier in the afternoon, because Laurie had to go to choir practice in the late afternoon. While on our walk, a pair of Western Coachwhip snakes (Masticophis flagellum) tumbled into our path in a mating ritual where they were constantly wrapping around each other and making their coachwhip like bodies look like a large piece of red and brown rope. At the end of their ritual, the red phased snake crawled off very quickly and disappeared into a hole in the bank, while the brown phased snake looked at us in dismay that we had been watching them before he crawled up the ditch bank at a more leisurely pace and disappeared into another hole in the side of the ditch bank.

"According to folklore, the coachwhip – a non-venomous snake that is surprisingly swift – will pursue and attack a person, squeezing its victim in its coils and lashing him to death with its tail. It will even stick the tip of its tail up a comatose victim's nose just to make certain that breathing has ceased and life has ended. Otherwise, the snake will resume its lashing.  In real life, of course, the coachwhip will not set upon a human, but it will certainly defend itself vigorously if cornered" (see DesertUSA.com — http://www.desertusa.com/reptiles/coachwhip.html).

These two were adult snakes, both were about 5 to 6 feet long. Coachwhip snakes take on the color of their environment, and the brown phased snake was very close to the color of the sand on the ditch bank. The red phased snake, which we used to call "red racers" because of their color and speed (they can crawl up to 7 MPH), is much like the pink in the Sandias, and matches the red soils that are found throughout New Mexico. They feed on lizards and other reptiles, including venomous snakes, birds, eggs, small rodents and insects. 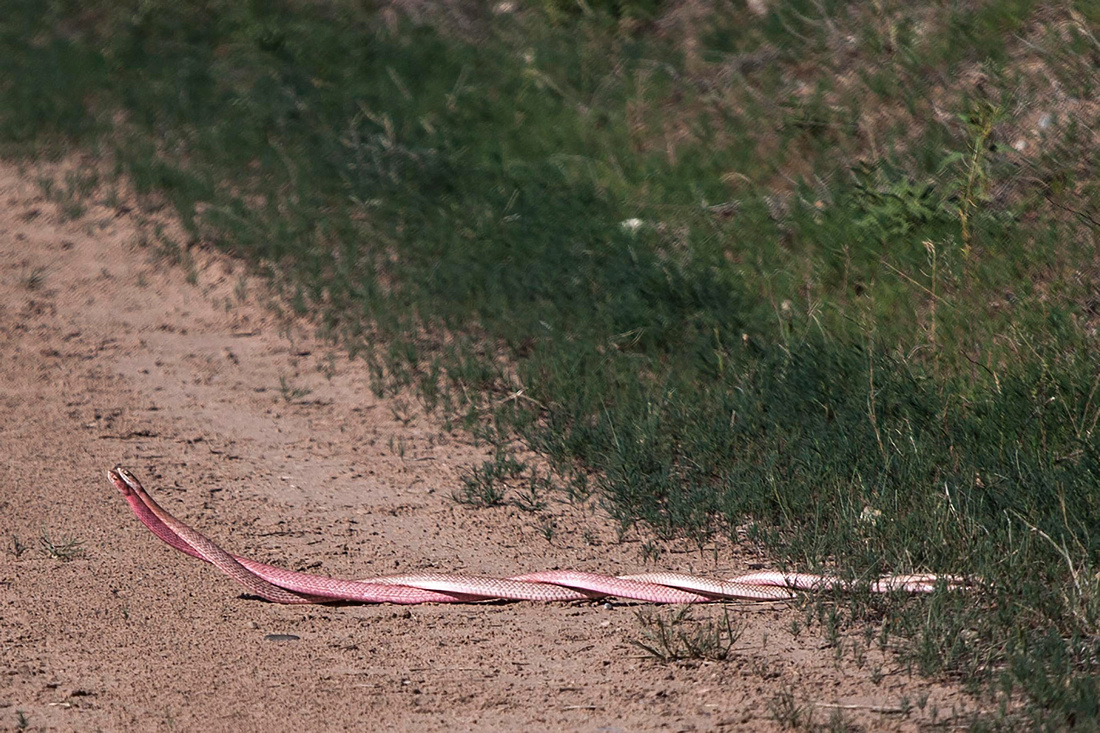 Stretched out, wrapped around each other, looking like a rope. 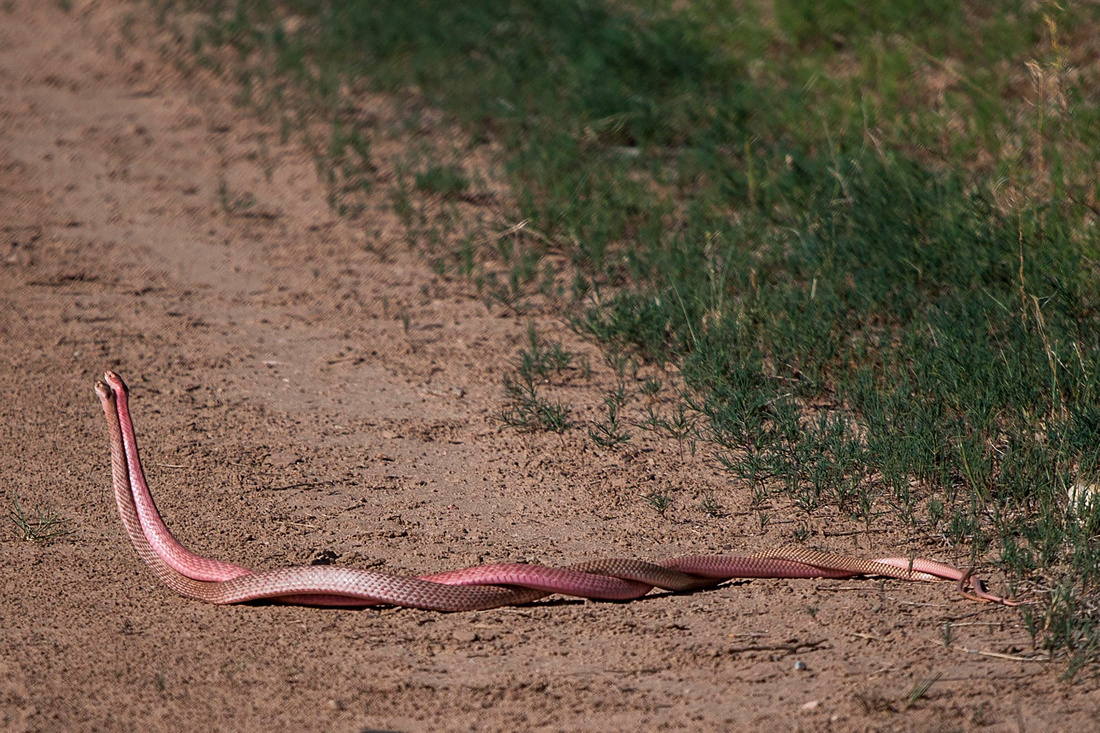 Their scales make them look like braided coachwhips and thus their name. 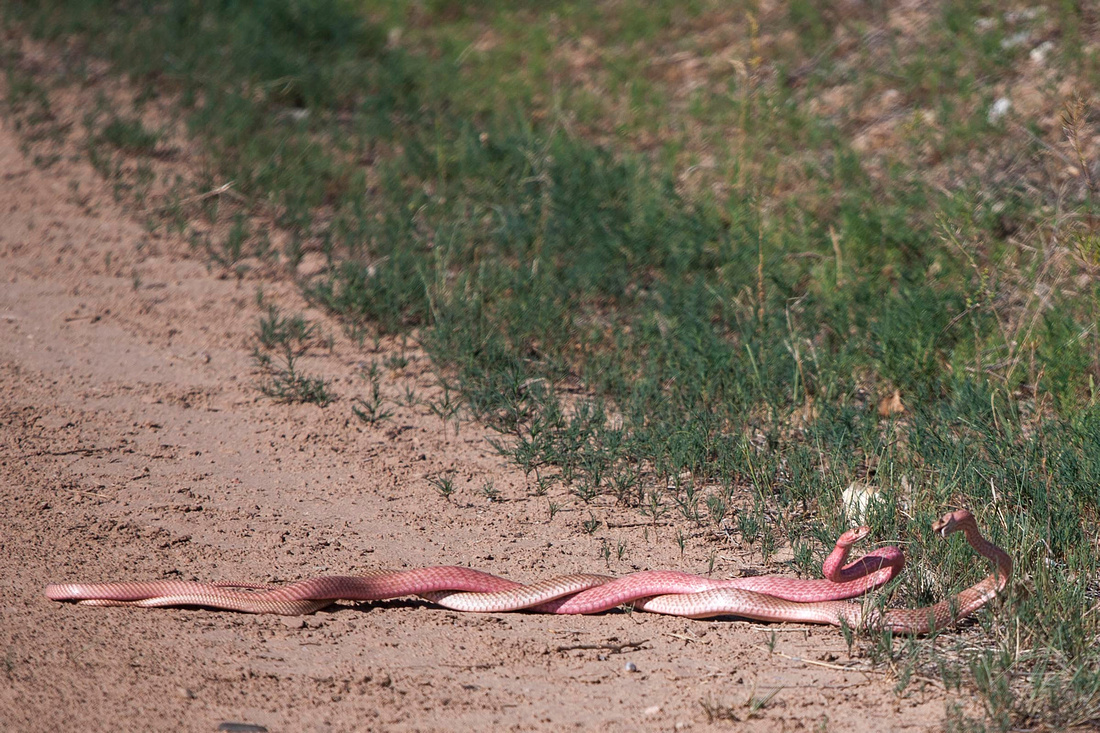 Turned around, they looked like they are fighting, but I didn't see them bite each other. 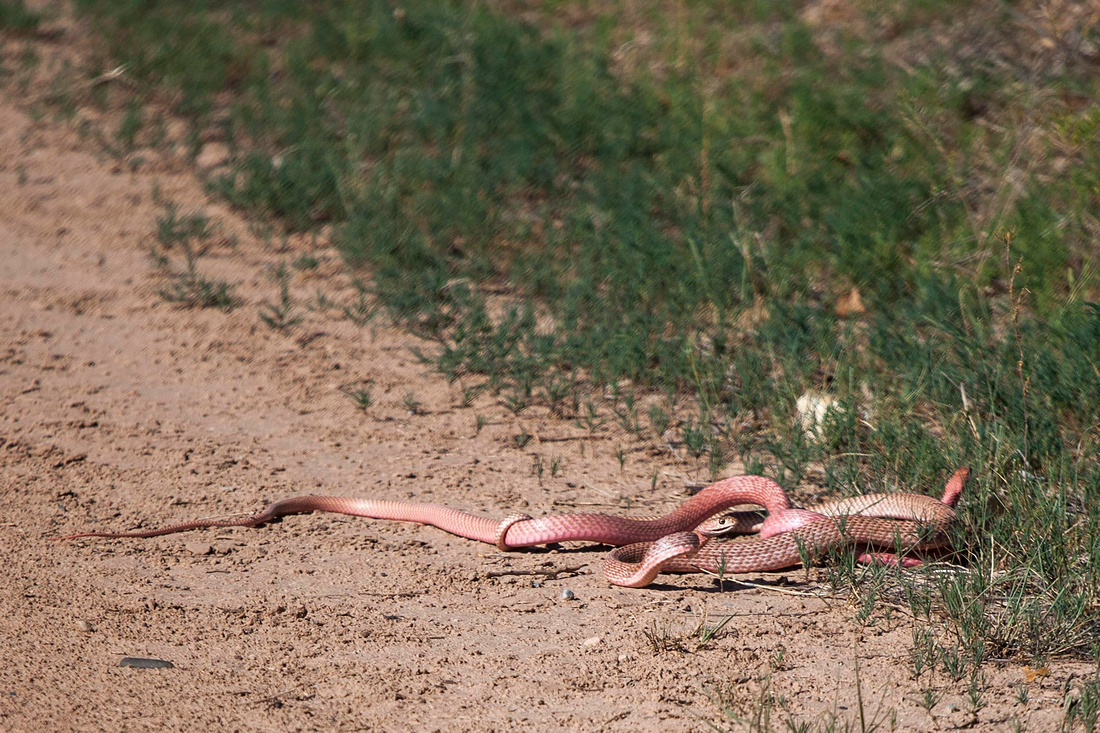 The brown phased Coachwhip sees us. 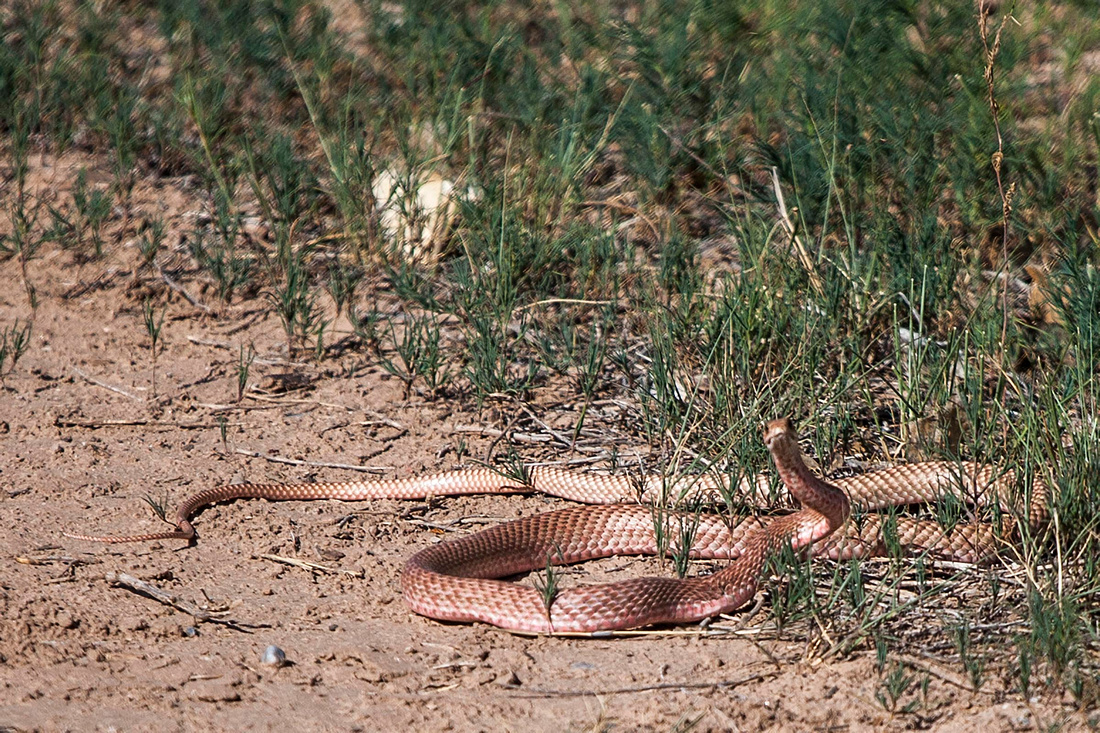 Who are those silly looking paparazzi? 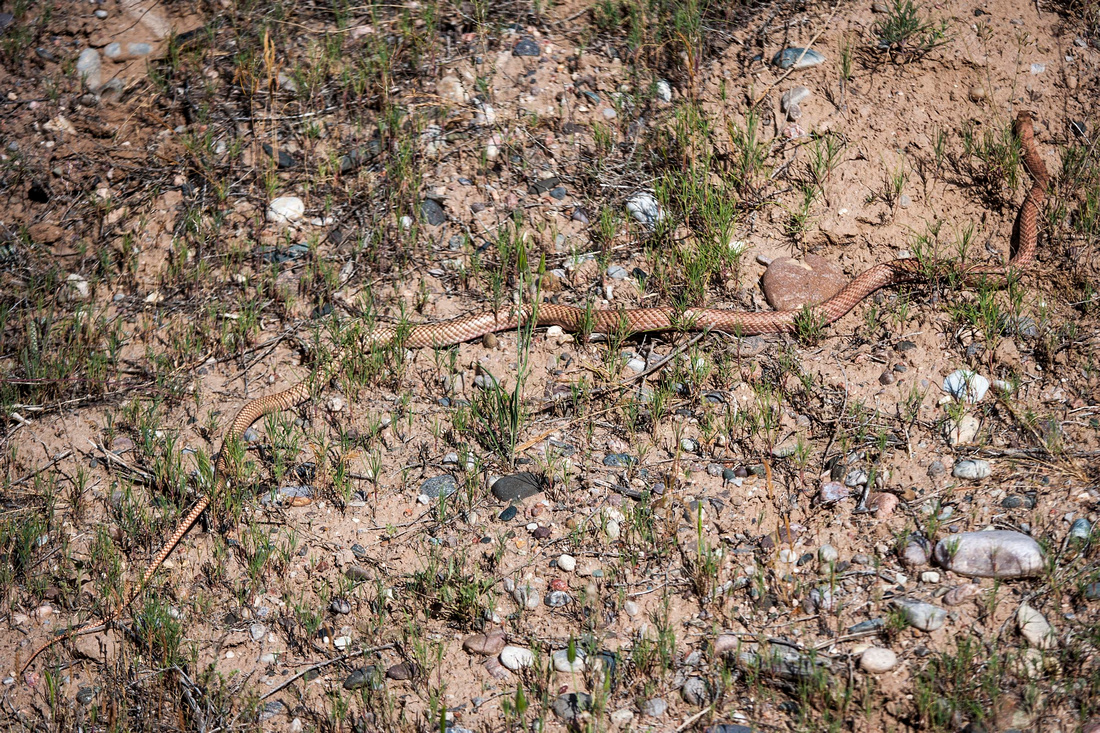 He crawled slowly up the bank before disappearing into a hole.

T & L Photos
Thanks, Julie!
Julie(non-registered)
Wow, we don't have snakes in NZ! What a display .. I'm so pleased that is folklore only!! When I lived in Australia I used to see the odd one when riding my horse .. thankfully my horse didn't see them! :D
T & L Photos
Well maybe next time. Thanks, Susan!
Susan Hunter(non-registered)
Aw, I miss all the fun.
T & L Photos
Spring is in the air. Thanks, Lyn!
No comments posted.
Loading...
Subscribe
RSS
Recent Posts
Last Post on Zenfolio Walk, Run, Splash, Fly A Walk in the Snow We Wish You a Merry Catmas Cranes, Train & A Full Moon on Winter Solstice I Had A Dream Shrink Wrapped Fly Away Fire & Phantasm First Snow on the 2nd
Archive
January February March April May June July August September October November December
Timothy Price
Powered by ZENFOLIO User Agreement
Cancel
Continue