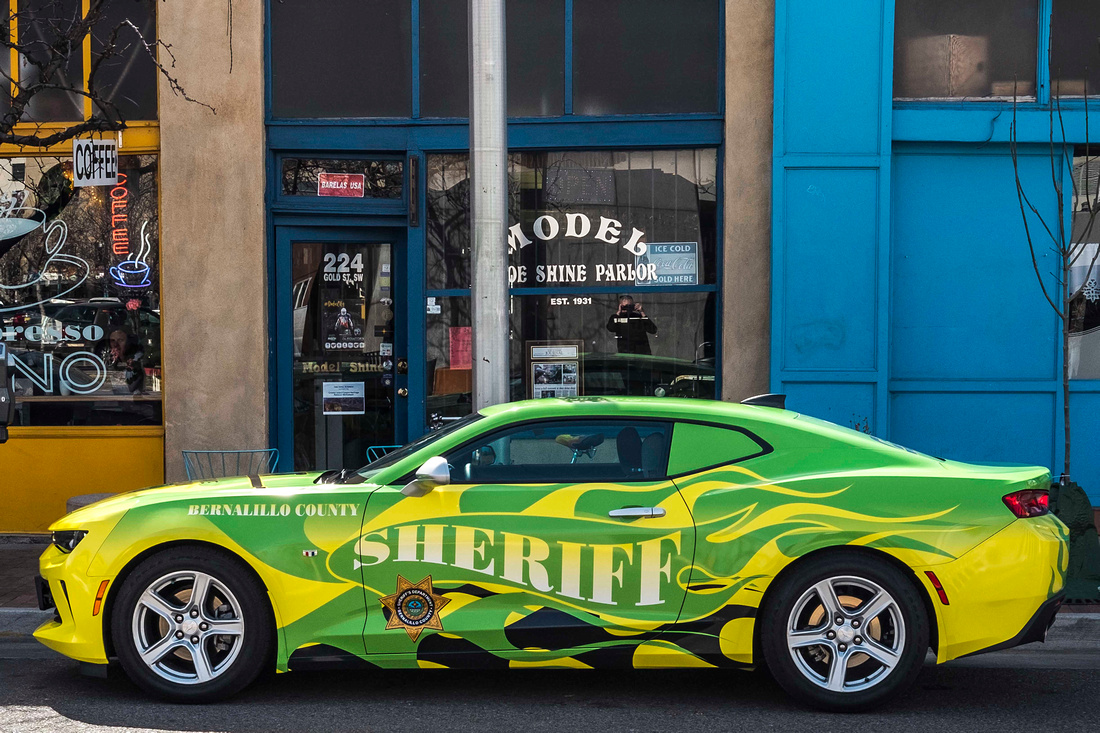 On our way out to lunch this afternoon, a Sheriff's Deputy was putting money in the parking meter before he went into the Model Shoe Shine Parlor to get his shoes shined. I asked him if he really had to put money in the meter, and he told me probably not, but he does it since everyone else has to feed the meters. There's a model officer and citizen for you — a lot of people who park along Gold don't bother to pay the meters and then get mad when they get a $20 parking ticket. I asked him if the Camaro he had parked there was the latest design for the Sheriff's Department. He told me it's the only car like it in the department. He said it's painted like a Hot Wheels car to appeal to the kids he works with as part of his duties in the anti-gang unit. Pretty clever of the Sheriff's Department to put one of their deputies in a Hot Wheels-like Camaro for the kids to drool over.

T & L Photos
It really is cool! Thanks, Julie!
Julie(non-registered)
Oh my, I have never ever seen a police car like it! What a great idea .. Good to know he feeds the meter ..
T & L Photos
Thanks, Christine!
Christine Robinson(non-registered)
Great car, and great story, Tim! My boys had hot wheels and loved them! Christine
T & L Photos
Thanks, Lavinia! Did you have Hot Wheels when you were a kid?
No comments posted.
Loading...
Subscribe
RSS
Recent Posts
Last Post on Zenfolio Walk, Run, Splash, Fly A Walk in the Snow We Wish You a Merry Catmas Cranes, Train & A Full Moon on Winter Solstice I Had A Dream Shrink Wrapped Fly Away Fire & Phantasm First Snow on the 2nd
Archive
January February March April May June July August September October November December
Timothy Price
Powered by ZENFOLIO User Agreement
Cancel
Continue