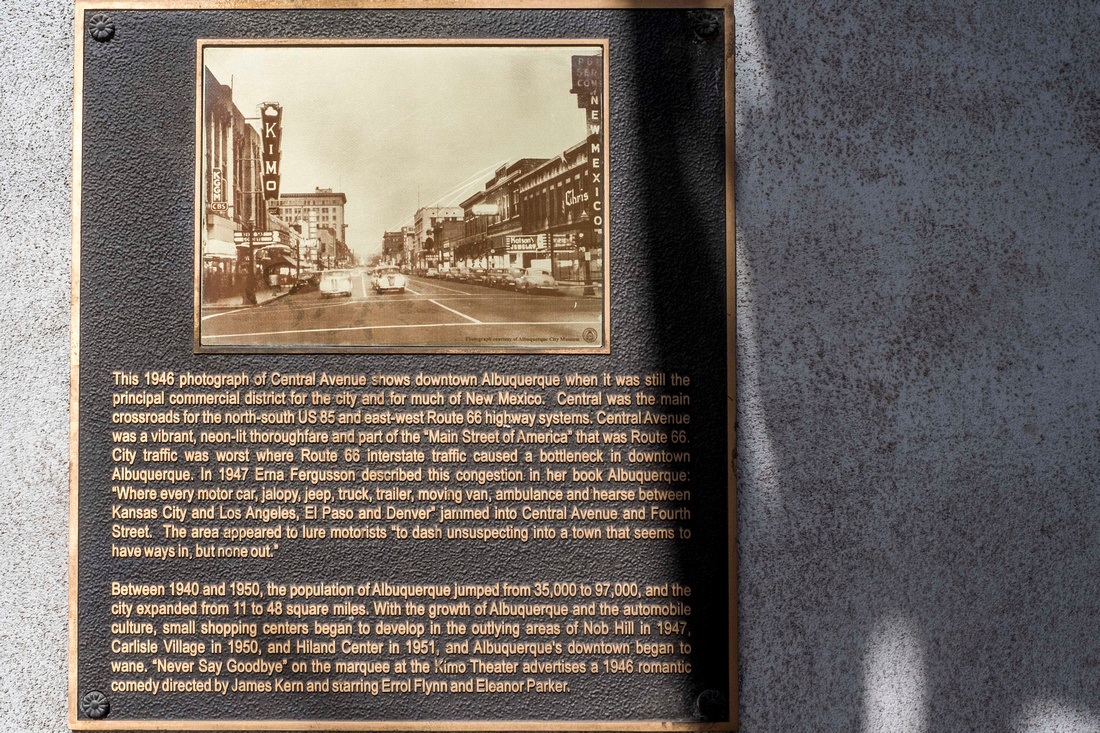 This bronze plaque on the old Sears Building on the corner of 5th Street and Central Ave (Old Route 66) in Downtown Albuquerque gives a brief history of Albuquerque from 1946 when the photo on the plaque was taken to 1950. Notice there is a small sign on the Kimo Theater that reads "KGGM CBS". I assume KGGM's radio studios were in the offices on the west side of the Kimo Theater in 1946. At that time KGGM was a CBS radio affiliate at 1260 on the AM dial. In the early 1950's, KGGM became a Channel 13 CBS affiliate television station, KGGM-TV. Today it is still Channel 13, but the call letters have changed to KRQE-TV. 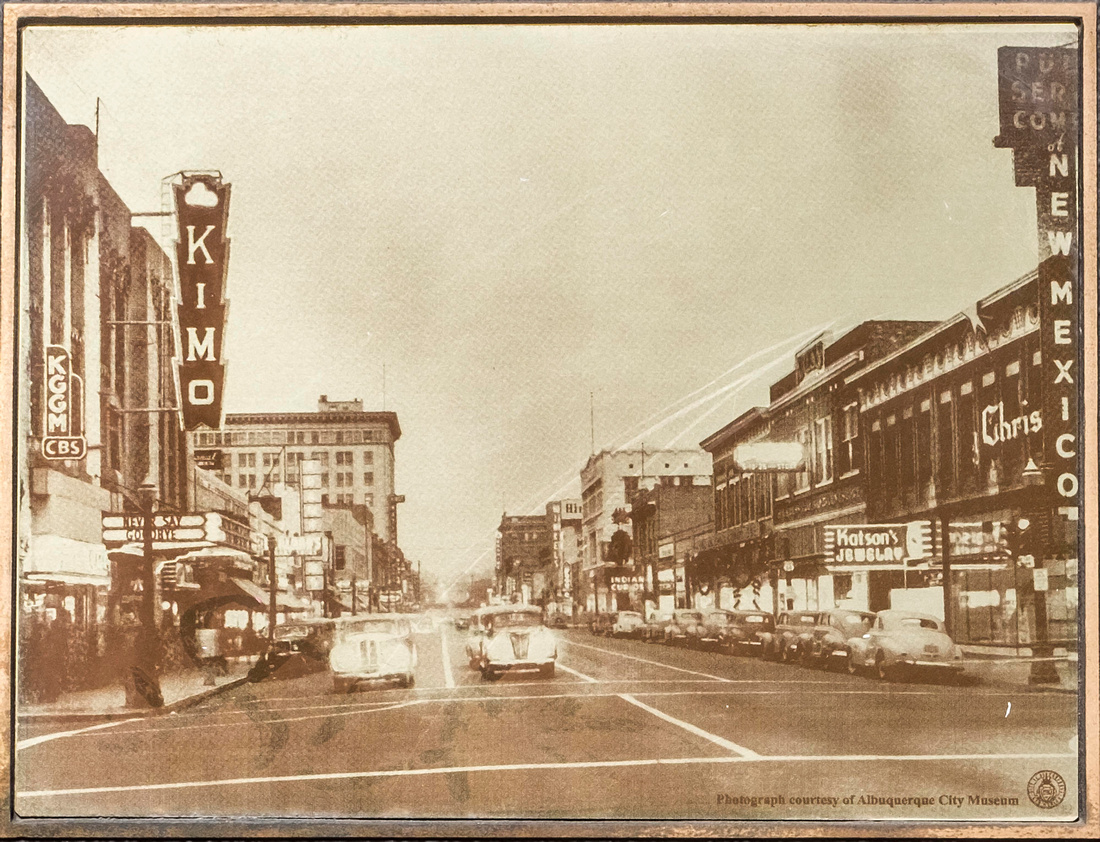 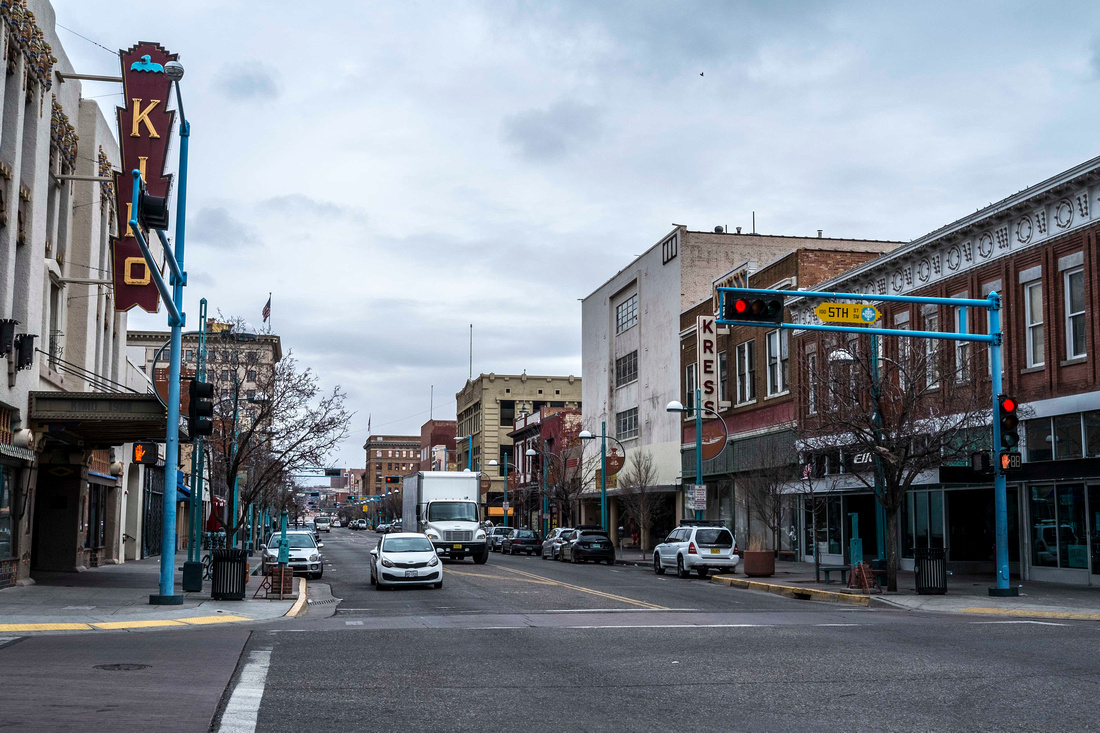 I took this photo from the same corner this afternoon at 2:47 PM. Most of the same buildings still line Central Ave in 2017 — some have had minor changes to their exteriors, others major changes, and a few buildings have been replaced since 1946. The "KRESS" sign at the top of the the KRESS building (mostly covered by the traffic light in today's view) looks to have endured the years, and the "KIMO" sign was redone to be close to the original. Otherwise, all the signs have changed and the buildings have been modernized. Yet there is still a sense of the old Route 66 from the days when KGGM was 1260 on the AM dial and Central would be a traffic jam of cars and trucks at three o'clock on a Monday afternoon.

T & L Photos
Thanks, Julie!
Julie(non-registered)
It is remarkably unchanged .. how amazing. So good to see the comparison Tim. Good to see yesteryear hanging in there :D
T & L Photos
Hi Sarah! It's nice that this strip of Central Ave is well preserved. However, there was a lot of buildings torn town all over downtown in the 1960's and 1970's urban renewal that were left as vacant lots until the last few years.
T & L Photos
Thanks, Harry!
Sarah Vernon @ First Night Design(non-registered)
This is my favourite kind of comparison though it often leads to weeping when I see how much has been lost or changed. This is remarkably unchanged.
No comments posted.
Loading...
Subscribe
RSS
Recent Posts
Last Post on Zenfolio Walk, Run, Splash, Fly A Walk in the Snow We Wish You a Merry Catmas Cranes, Train & A Full Moon on Winter Solstice I Had A Dream Shrink Wrapped Fly Away Fire & Phantasm First Snow on the 2nd
Archive
January February March April May June July August September October November December
Timothy Price
Powered by ZENFOLIO User Agreement
Cancel
Continue