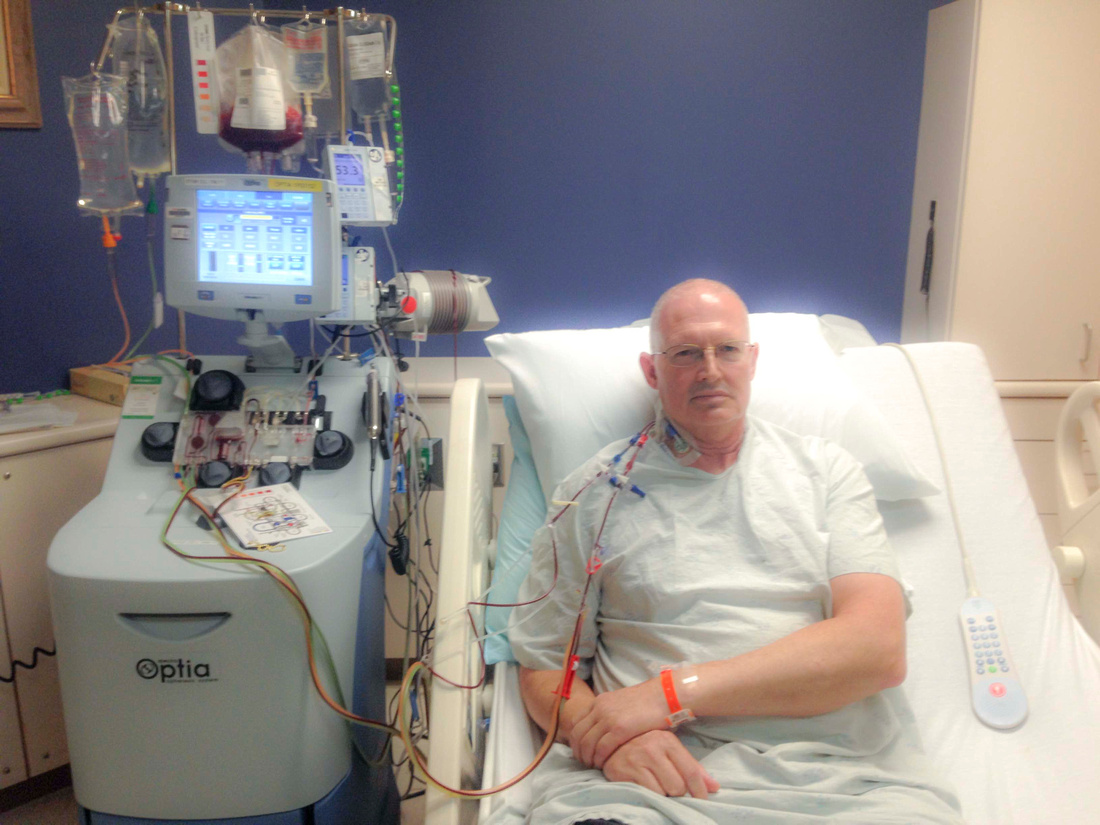 Laurie got a decent photo of me plugged into the stem cell harvester with the VASCATH they stuck in my neck only 15 minutes before they plugged me into the machine. I think I look a lot like my father with my fuzzy head.

As I laid on the couch last night after finding a position that gave me temporary relief from the pain, I wondered how I would ever get anything done again. I couldn't face the computer to read and answer email, let alone even think about posting a blog — two days of stem cell harvesting while dealing with intense pain had taken its toll, and I couldn't do anything but try to get comfortable.

They had harvested half the stem cells they needed to do the transplant on Monday, so Tuesday morning a surgeon placed a VASCATH in my neck. After I saw the VASCATH in my neck, I figured "VAS" must stand for "Vampire Access Straw", and this model had two straws so vampires could share their victim with friends and family, kind of like a double-straw malt from an old-fashioned diner.  I was awake while the surgeon placed the VASCATH and I felt most of the procedure because the local anesthesia was very localized. Right after the surgeon "tacked down" the cath with a couple of sutures, and the nurses got me disconnected and cleaned up, a couple of guys rolled me from surgery to the infusion room on the other side of the hospital, where I was hooked up to the Optia harvester and my blood was circulating through the machine within 15 minutes of being wheeled out of surgery. Being hooked up using the VASCATH for 7 hours was so much better than having to lay on my back as still as possible without moving my arms for 7 hours — even with no pain, 7 hours in one position would be pretty unbearable.

I had gotten my pain pretty well under control by the time I reported for surgery, but as the day wore on it grew worse and seemed to stop responding to pain meds. The problem with doing procedures as an outpatient is that the doctors will not prescribe the really good narcotics that really kill pain because of liability, so when the strongest thing they can legally prescribe doesn't work, you have to grimace and bear it.

After a really rough night, I managed to get the pain under control, and we went back the hospital this morning to see if they had harvested enough stem cells, and have the VASCATH removed.  Out of the two days, they got 5.7 million, 100% viable stem cells — they needed to get 5 million stem cells for the transplant.  The doctor decided they could pull the VASCATH without doing labs, because my platelets were 55 on Tuesday afternoon, and they only need to be a 20 to pull the cath, so there was little chance they had fallen below 20 in less than 16 hours. Not having to doing labs saved us a couple hours of waiting around, so we were able to make it to a class Laurie and Tristan are taking called The History of  the English Language after we were done with removing the VASCATH and taking my vitals. 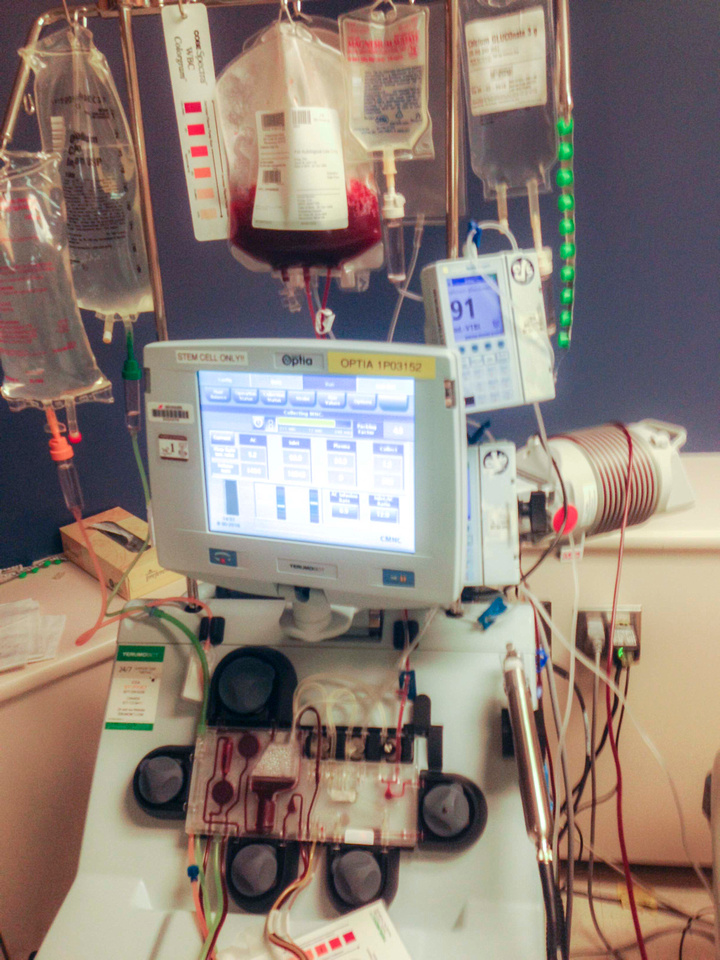 The Optia harvester made chugging noises as my blood flowed through various mechanisms into it and out of it, and the dials spun at different speeds like a Steampunk inspired concoction of old-world machine mixed with modern, high-tech assemblies. My stem cells (orange-red) were collected in the large bag in the center. 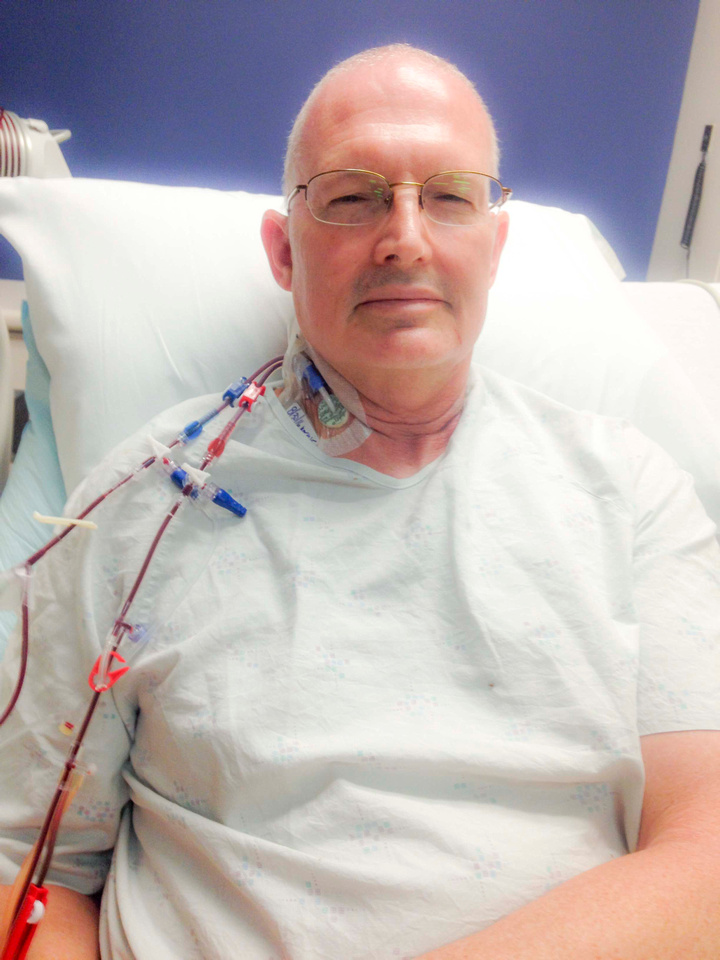 Laurie got me doing my best "Squint like Clint" look. This is a good close up of the VASCATH with a good view of the "double-straws" for the vampires.

T & L Photos
Thanks, Julie.
Julie(non-registered)
Tim .. this machinery and equipment looks amazing. Oh I'm so sorry to hear you had to go through pain and discomfort. I hope you are feeling way better now my friend
T & L Photos
Thanks, Teagan! I was feeling pretty good by the time we went to class.
T & L Photos
Thanks, Herman! That's high praise. It's hard to compete with Mr. Bowie.
T & L Photos
Thanks, Harry!
No comments posted.
Loading...
Subscribe
RSS
Recent Posts
Last Post on Zenfolio Walk, Run, Splash, Fly A Walk in the Snow We Wish You a Merry Catmas Cranes, Train & A Full Moon on Winter Solstice I Had A Dream Shrink Wrapped Fly Away Fire & Phantasm First Snow on the 2nd
Archive
January February March April May June July August September October November December
Timothy Price
Powered by ZENFOLIO User Agreement
Cancel
Continue