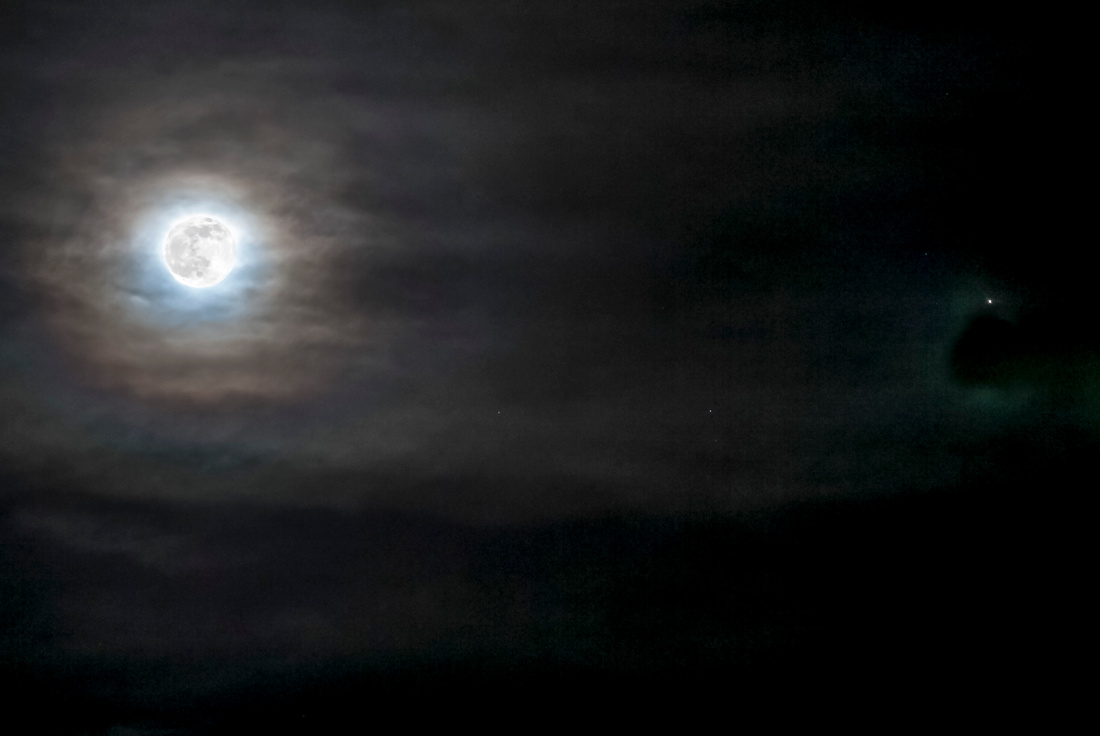 I put together three different photos to make this photo.

Teri Dashfield brought up the "Orton Effect" on her blog today which reminded me that while I rarely use the technique the way most photographers use it, I do use a similar technique on occasion the deal with high variations in exposure — today's photo is one of those occasions.

"Orton Imagery" was developed by Michael Orton in the 1980's by making different exposures, varying the focus, and zoom of the same subject on slide film and then sandwiching the film together to create images that imitated watercolor paintings, as he explains on his website. Creating the "Orton Effect" is a much simpler process with digital photography and image processing software like Photoshop, and the "Orton Effect" is used quite often these days, especially with landscape photography — if you have spent any time looking a photos on sites like Fotoblur and 500px you will have seen photos with the "Orton Effect".

To create the image of the blue moon behind a thin layer of clouds with Mars peaking between the clouds on the the far right side of the photo, I put together three separate photos in Photoshop with different exposures and clarity, aligned the layers, set different opacities for each layer, and finally merged the layers together into a single image. Two of the images are underexposed so they show the clouds, but the moon is overexposed and shows up as a bright disk like the sun, the third image is the moon photographed at the correct exposure, which gives the moon detail, but the clouds disappear in the blackness. I put the brightest image on the bottom layer, the moon with detail as the middle layer, and I slightly darker photo that still shows the clouds as the top layer; when the tree layers are put together, aligned and adjusted I get a moon that has some detail in the middle of glowing clouds with Mars showing up as a bright spot between the clouds on the far right side of the photo. There are a few faint dots in the photo that might be stars, but they are more likely hot spots on my camera's sensor.

I normally think of the process I used to create today's photo more as creating a manual version of "HDR" or "Image Stacking" than the "Orton Effect", but after Teri reminded me of the "Orton Effect" and I reviewed Mr. Orton's process, I see I am using a process similar to his original process, but for different reasons.

T & L Photos
You are not boring at all, Julie! I love your photos. You get a lot of really great shots.
Julie(non-registered)
Oh I am so boring ... and you so clever. I can just handle Lightroom. :D
T & L Photos
Thanks, Juanita!
T & L Photos
Thanks, Teagan!
T & L Photos
Thanks, Herman! You'll have to try it on Mr. Bowie!
No comments posted.
Loading...
Subscribe
RSS
Recent Posts
Last Post on Zenfolio Walk, Run, Splash, Fly A Walk in the Snow We Wish You a Merry Catmas Cranes, Train & A Full Moon on Winter Solstice I Had A Dream Shrink Wrapped Fly Away Fire & Phantasm First Snow on the 2nd
Archive
January February March April May June July August September October November December
Timothy Price
Powered by ZENFOLIO User Agreement
Cancel
Continue