Adventures with my Wankel 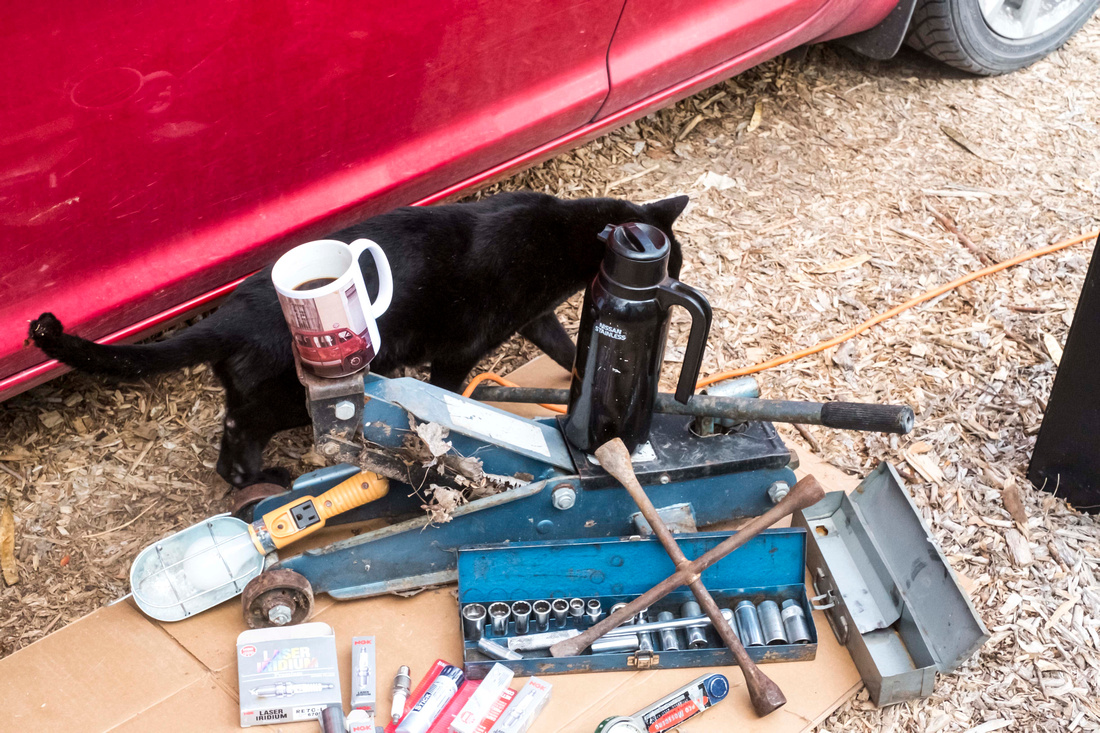 I decided to get really adventurous and change the sparks plugs in my RX-8's Wankel rotary engine myself. Wankel engines burn oil as part of the lubrication process, so the spark plugs need to be changed every 25,000 to 30,000 miles. While changing spark plugs normally isn't a big deal in most piston engines, changing spark plugs in a Wankel is a major undertaking, so much so, that mechanics charge $300 to $400 to change spark plugs in a Mazda RX-8. The plugs are Laser Iridium, and even at discounted prices cost $20 each, so changing the plugs myself still cost me $100 for the plugs, anti-seize paste and taxes on the lot.

Since I haven't done any real work on a car in years, finding all the tools was like a scavenger hunt. I had to remove the left front wheel to get to the spark plugs on the engine, so the first thing I had to find was the floor jack, which after quite a bit of searching, I found buried under several seasons of cottonwood leaves. Then I had to get my cup of coffee with a photo of a classic Renault R5 I took in France, my thermos of coffee, gathered up the rest of the tools, and let Rosencrantz out so he could help me. With coffee on the floor jack and Rosencrantz for an assistant, I was ready to start my adventure with my Wankel. 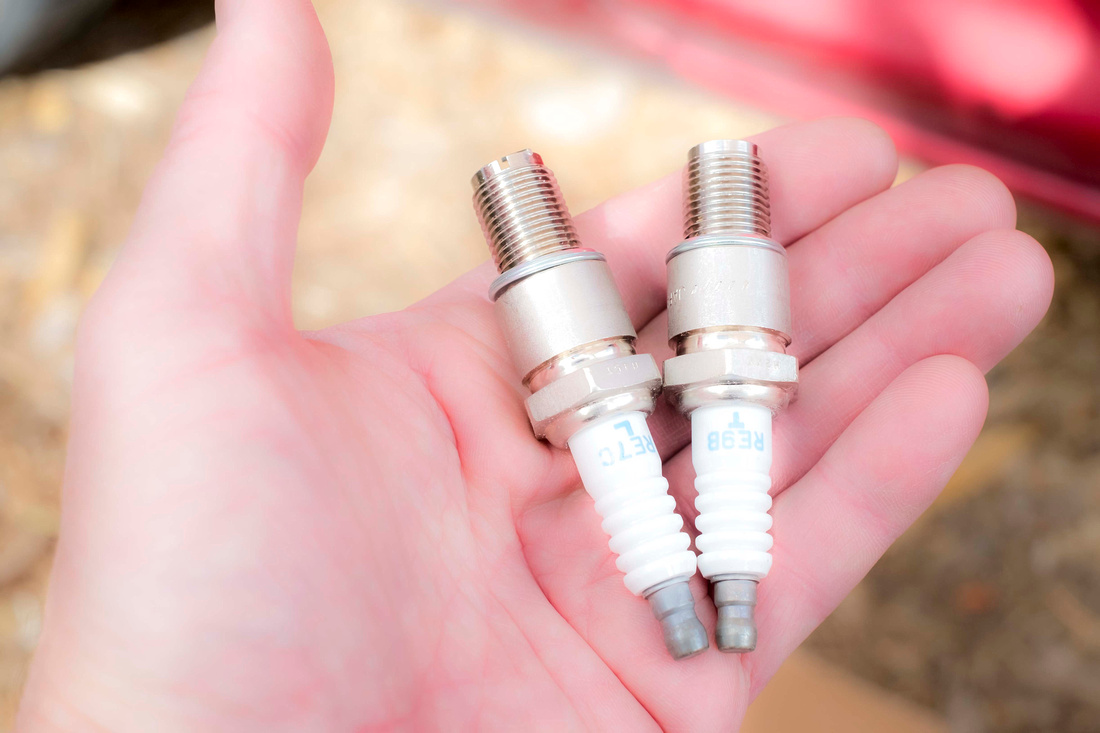 There are two sets of plugs in a Wankel engine. Each set has a "Leading" plug and a 'Trailing" plug. 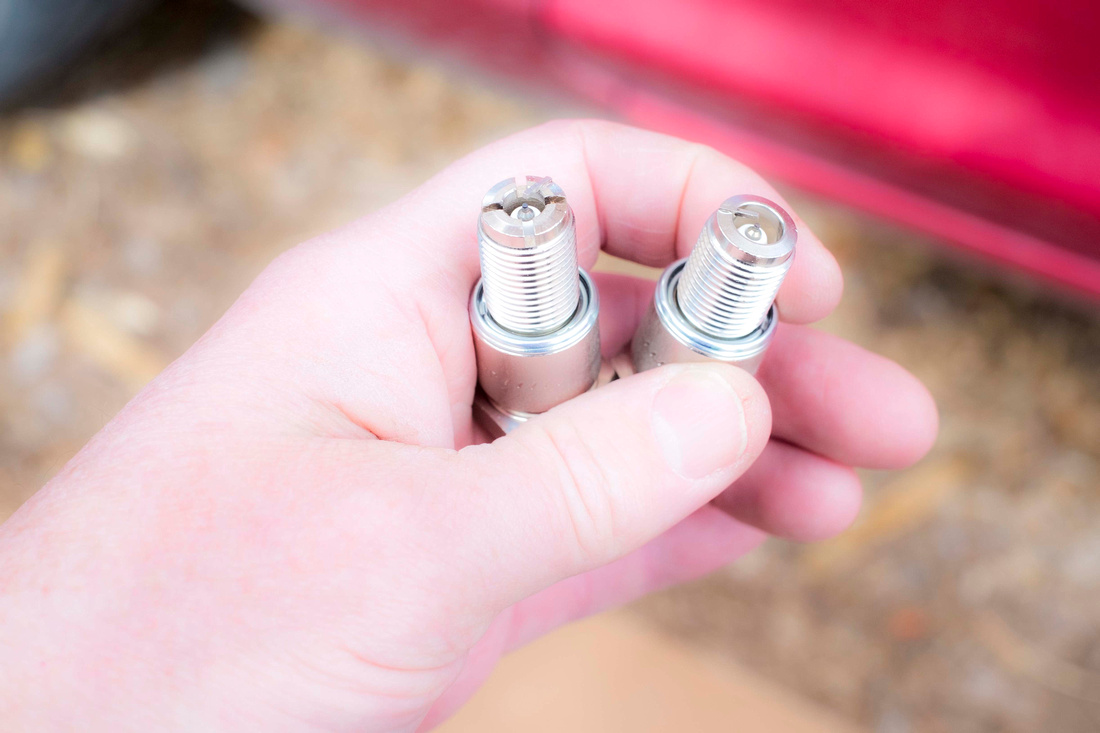 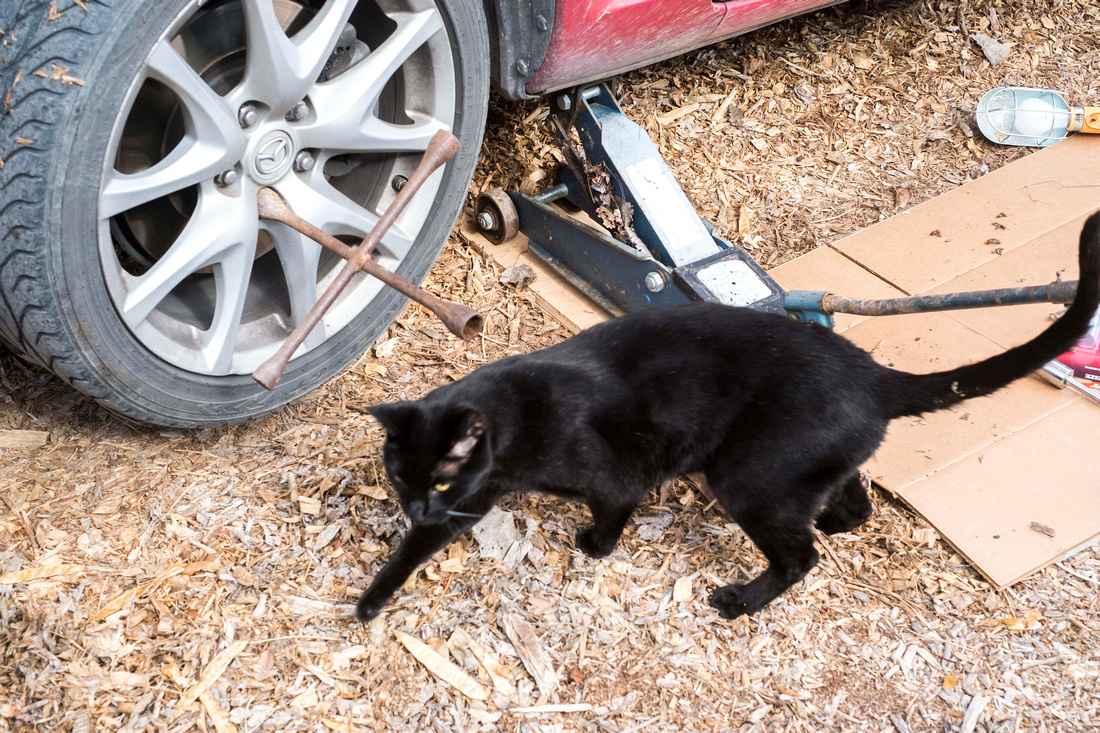 Rosencrantz gave his approval to remove the front tire and then moved on the see what he could find that was more interesting. 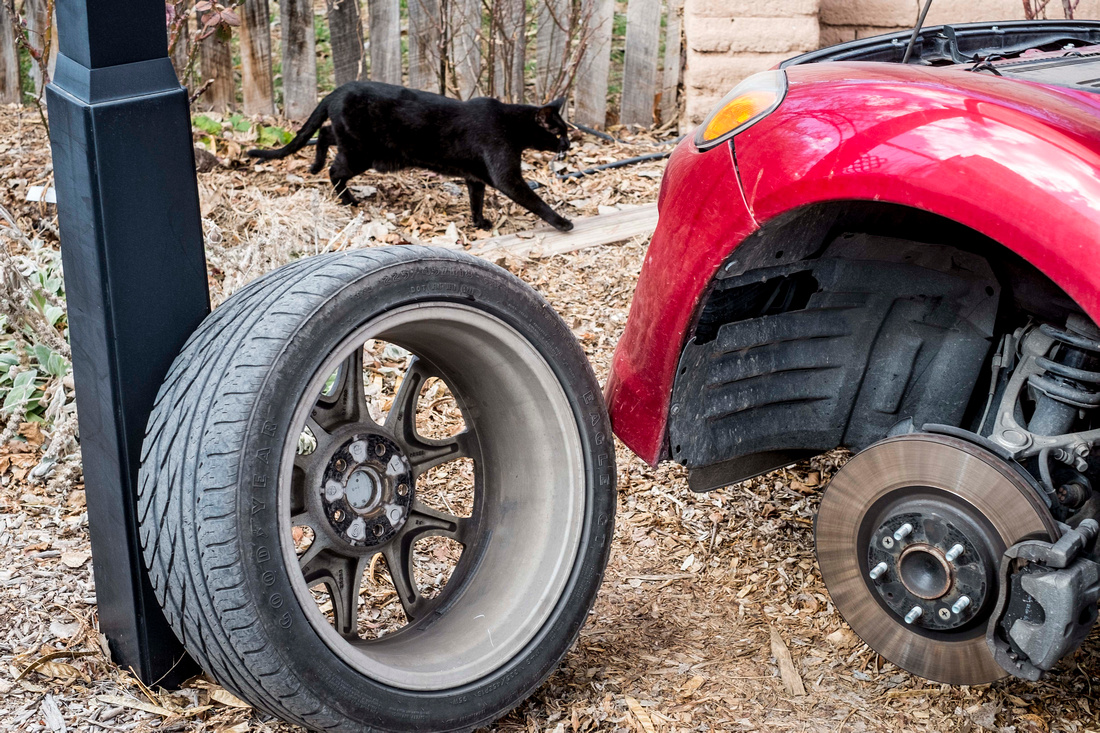 Wheel off and Rosencrantz making the rounds. 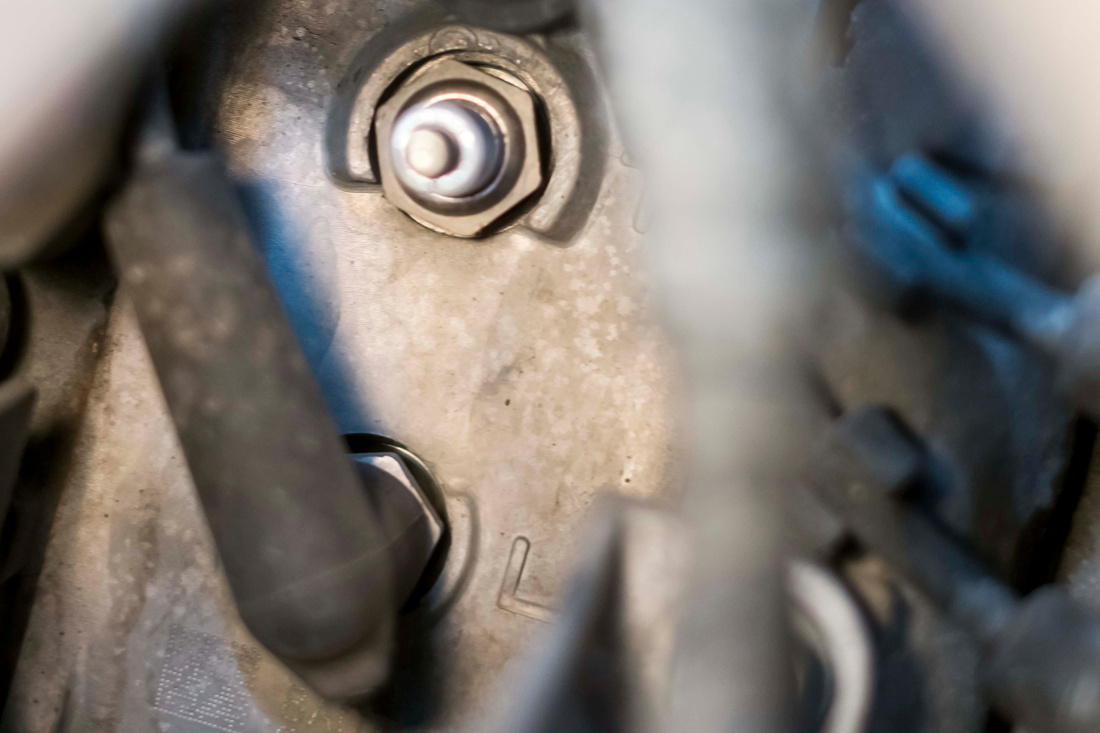 Close up of the spark plugs in the engine. The Leading plug is on the bottom and the Trailing plug is the one on top with the cap removed. 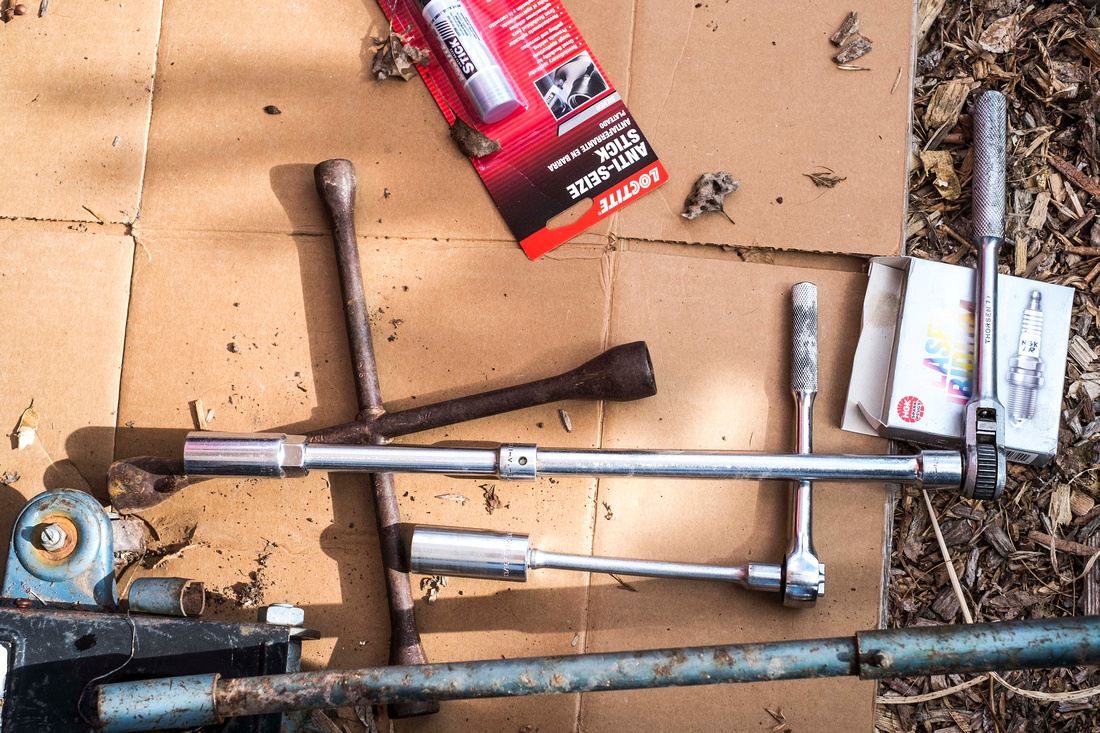 i needed a longer extension on the ratchet to reach the plugs in the front rotor. The ratchet with the two extension and socket on the Trailing plug. 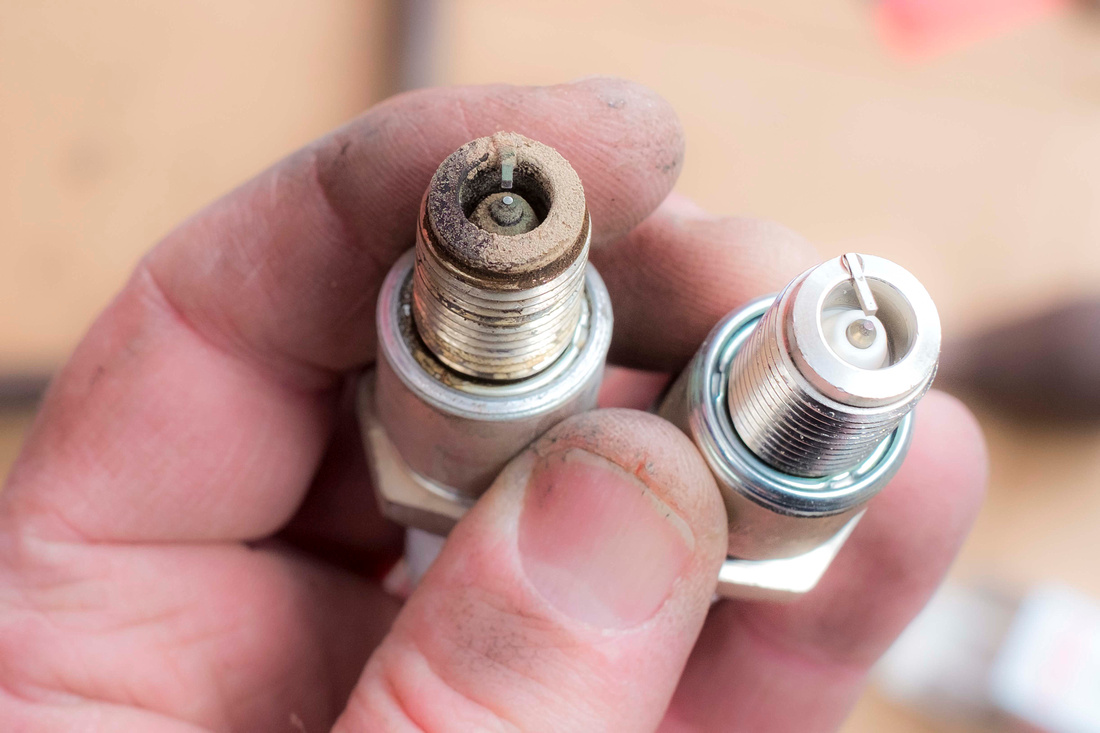 Carbon buildup on the first Trailing plug I removed that has between 25,000 and 30,000 miles on it, with the new plug next to it. 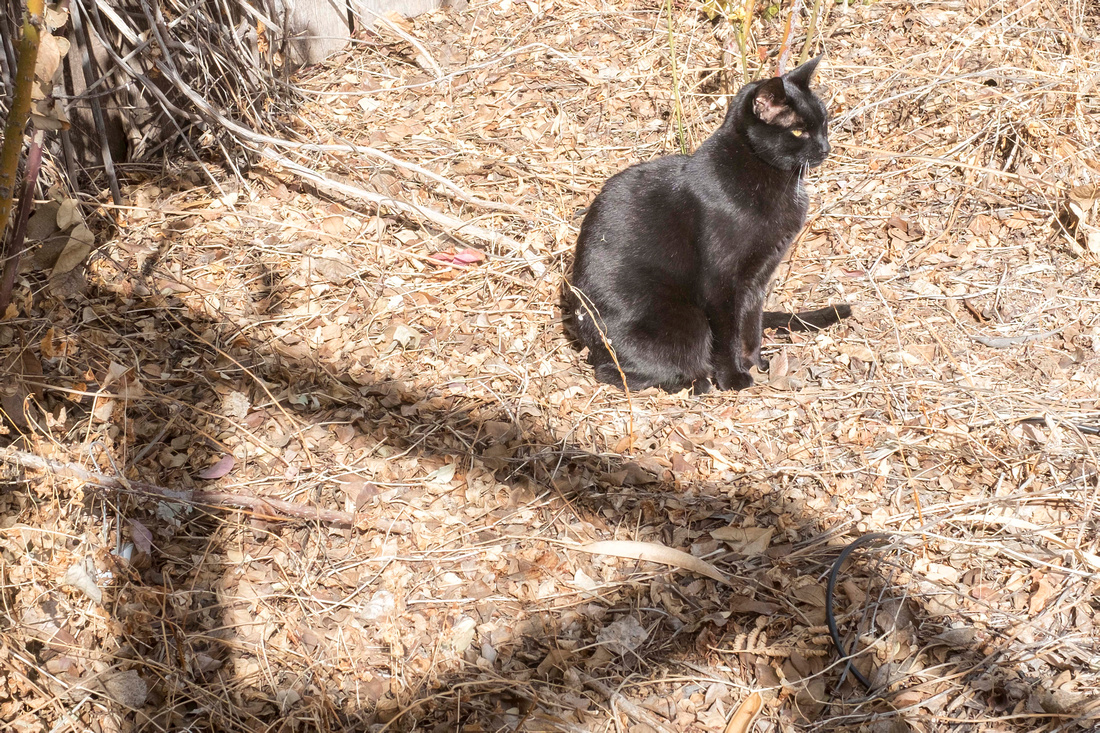 Rosnecrantz disappeared on me, and I found him taking a break to enjoy the clouds over the Sandias. 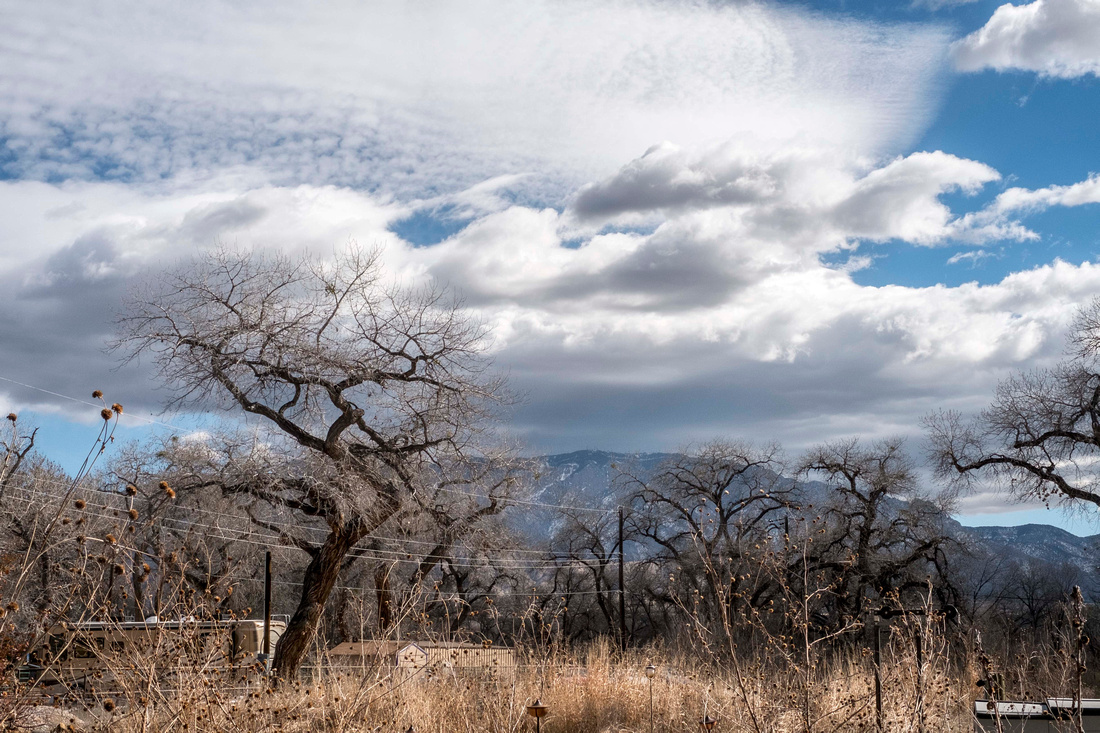 The view that distracted Rosencrantz. 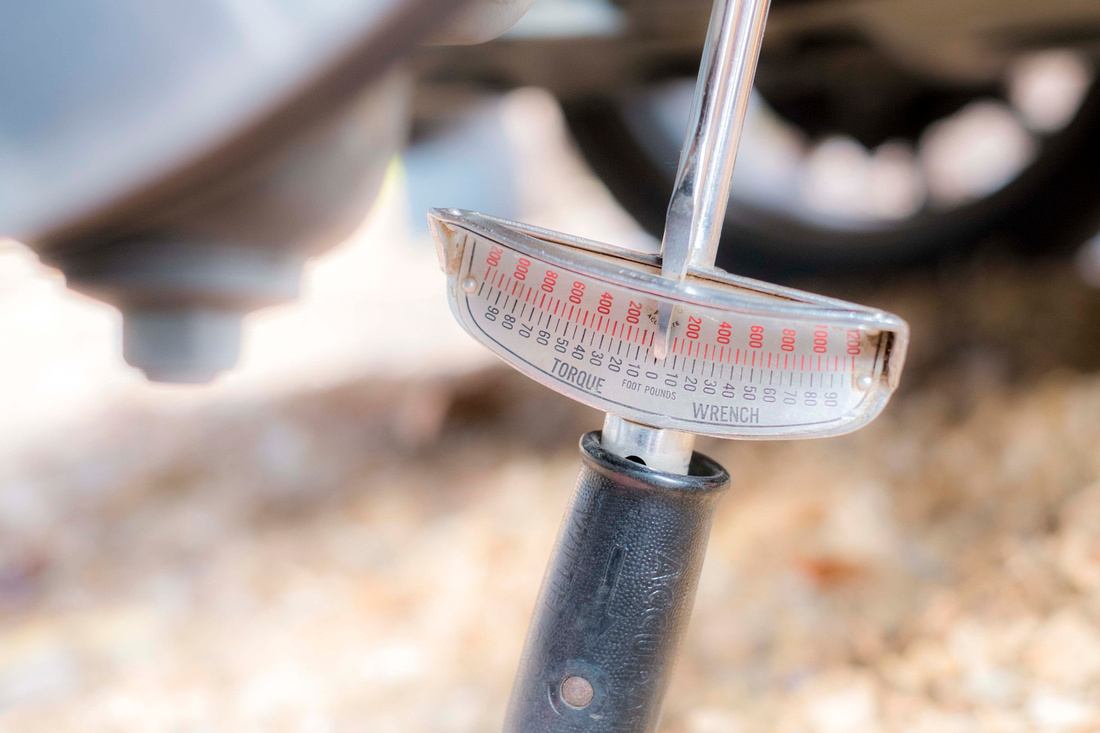 I removed one plug, put a new matching plug back in, used a torque wrench to tighten to between 10 and 15 foot pounds, replaced the spark plug cap and then, moved on to the next plug. By changing the plugs one at a time, I couldn't get the spark plug wires crossed. The first leading plug i removed with a lot of carbon build up on it compared to the new plug. 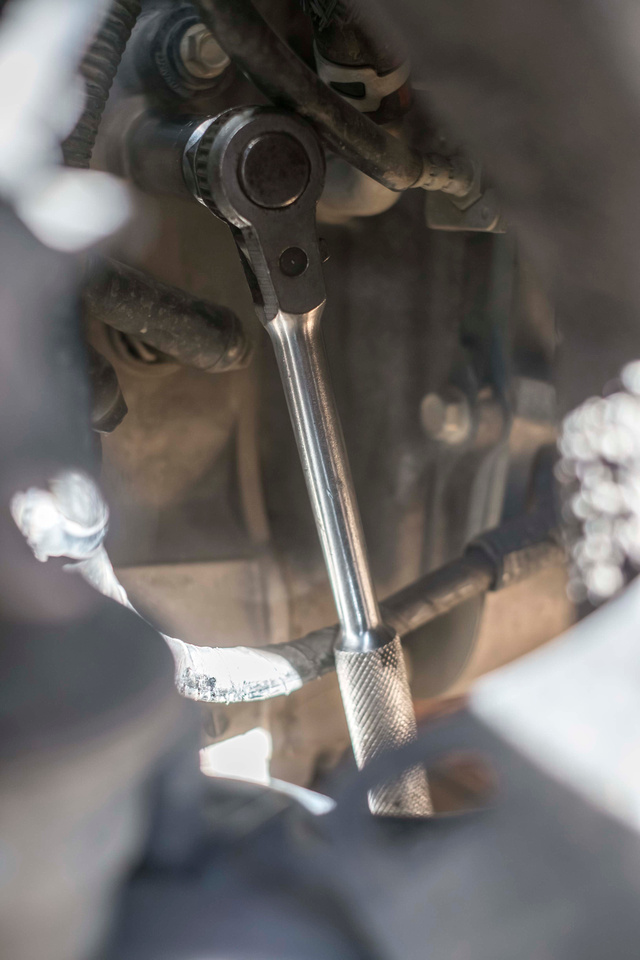 The two plugs in the back rotor proved to be much more difficult to get to and remove. There was not a straight shot through and opening in the wheel well, so I had to use the ratchet inside the engine compartment, working through the hole in the wheel well. I had little room to move or get leverage to loosen the plug, so it took all hand strength to get the plug loose, and a lot of micro turns to get it to a point i could finish unscrewing it with my hand. I had to use a knuckle wrench to get the bottom, Leading old plug out of the back rotor and the new one back in. 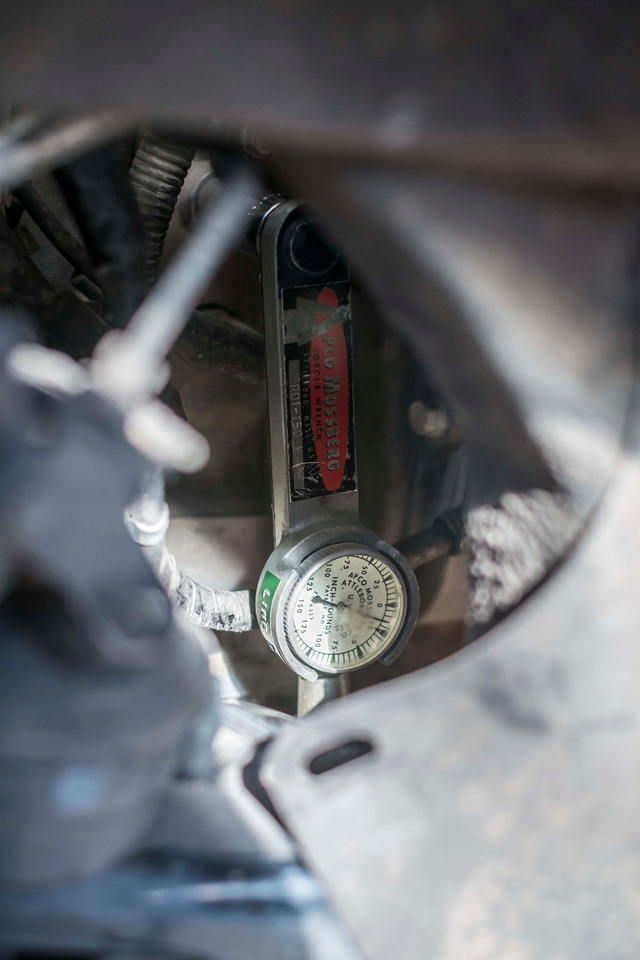 Fortunately I had the short torque wrench that fit into the available space in the engine compartment for tightening the new plugs in the back rotor. 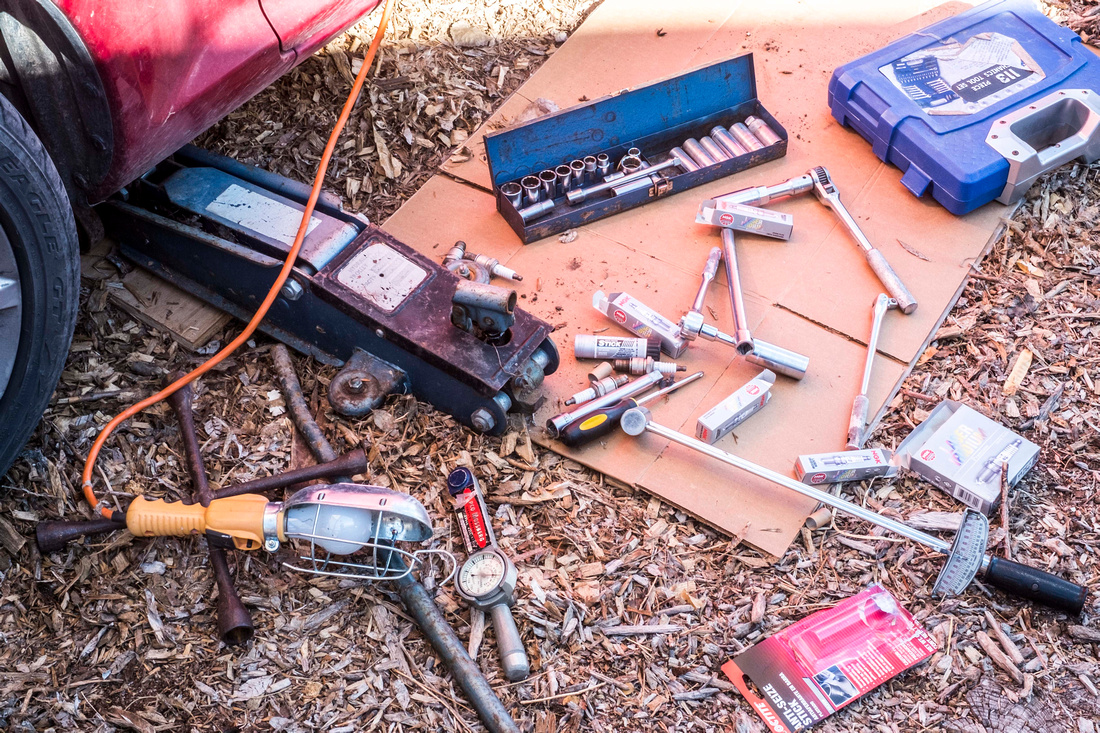 After I got all the tools together, it took me two and a half hours to change the sparks plugs in my Wankel. After cleaning up the mess of tools and boxes, I started the car and took it for a test drive. It's running great, smooth and quick. The change in performance from fowled plugs is gradual, so I hadn't noticed the difference until I felt how much better the car performs with new plugs in it. 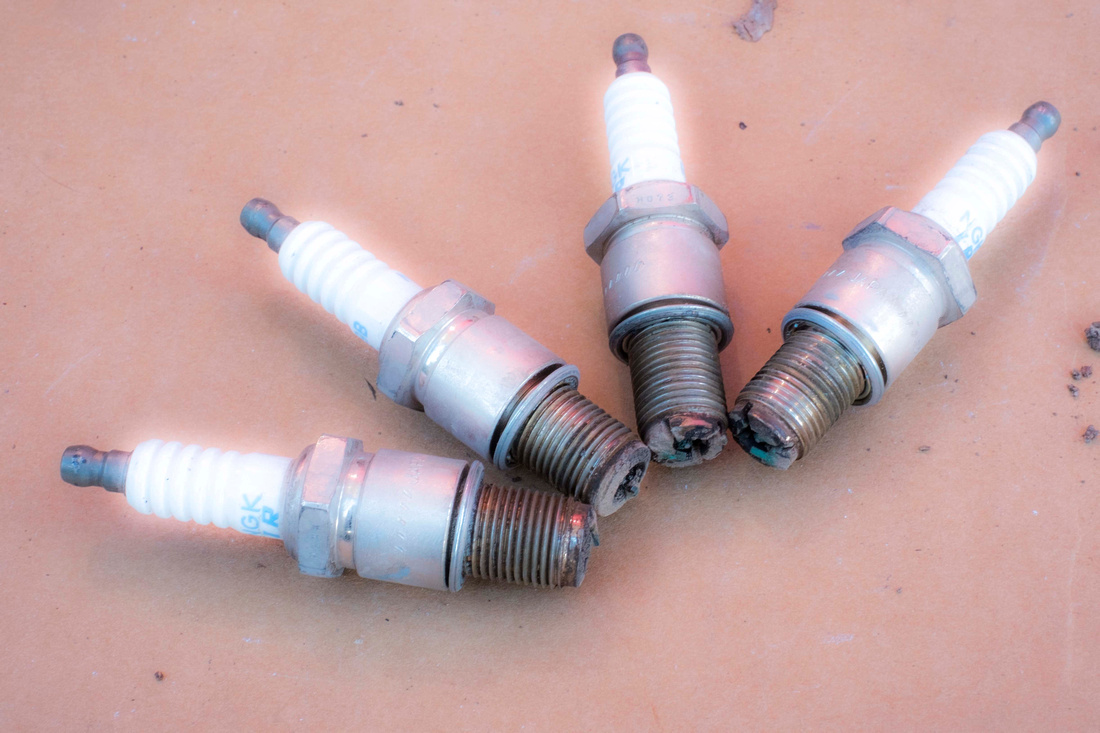 T & L Photos
Thanks, Julie. Cat help helps.
Julie(non-registered)
Hey Tim ... you are so clever! Isn't it nice to know that you can do these things yourself. And what about your handsome kitty helper? Well done!
T & L Photos
Hi David. Rosencrantz was more interested in watching clouds and prowling around than helping me. Spunk, on the other hand, would have been all over me to see what I was doing, trying to get his paws into things.
T & L Photos
Thanks, David. I normally have the Mazda dealer change the oil and other maintenance on all three of our Mazdas. I decided I could do the spark plugs an save a little money. The dealer is about half the cost of Jiffy lube on oil changes, and since the RX-8 can't run synthetic oil, I don't trust the Jiffy Lube techs to put tradition oil in it. I asked a local garage where I had some bodywork done about changing the oil on the RX-8 while it was in the shop, but they only use synthetic oil for oil changes, so they were going to charge me triple the normal cost of an oil change to go out and buy standard oil. I told them to forget that. Since the RX-8 burns a quart of oil about every 3 tanks of gas, I really don't have to have it changed as often as I would if it didn't burn oil. I also like having the dealer change the oil in all our cars so they can deal with disposing of the used oil.
David(non-registered)
Forgot to add you had a good snoopervisor in Rosencrantz. Didn't lean in to see what you were doing, and doing it correctly. A Siamese would have been right on top of you watching to make sure you're doing everything right. :)
No comments posted.
Loading...
Subscribe
RSS
Recent Posts
Last Post on Zenfolio Walk, Run, Splash, Fly A Walk in the Snow We Wish You a Merry Catmas Cranes, Train & A Full Moon on Winter Solstice I Had A Dream Shrink Wrapped Fly Away Fire & Phantasm First Snow on the 2nd
Archive
January February March April May June July August September October November December
Timothy Price
Powered by ZENFOLIO User Agreement
Cancel
Continue