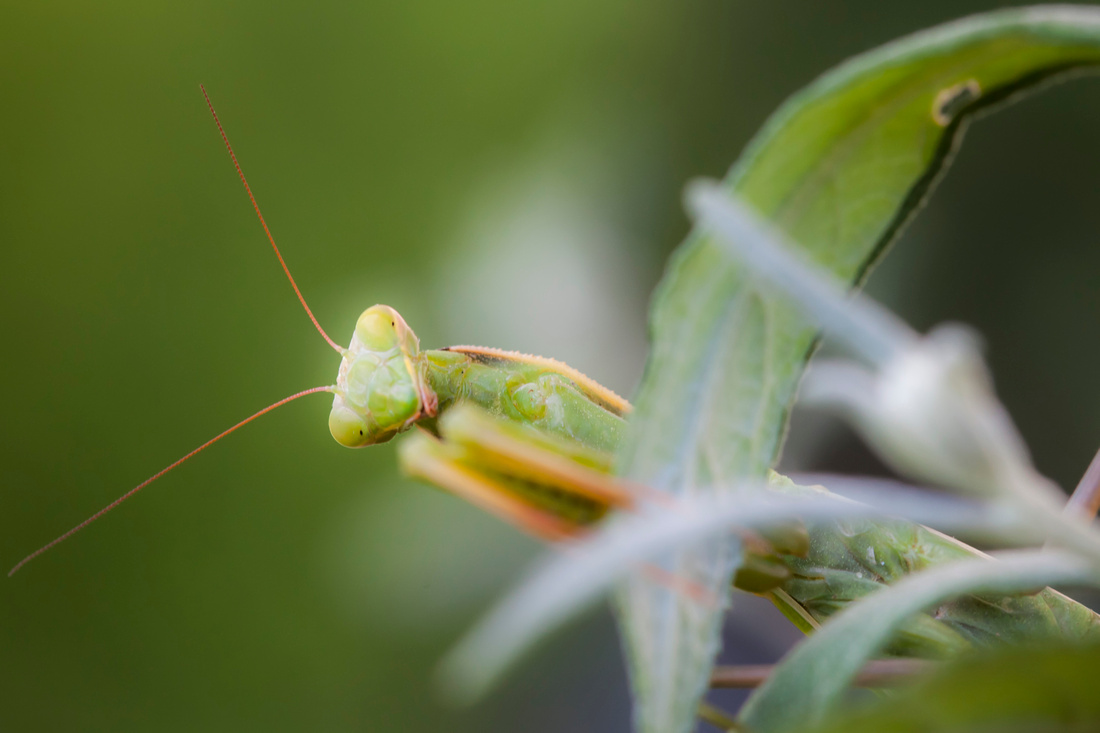 While I have been doing "Tales From My Youth..." on Sundays for the past month, I didn't have time this week to create photos for a tale. The stories are easy to write, but creating photographs to illustrate them can be quite difficult and time consuming — it took me two weeks and almost 100 miles of driving to get the photos for the story about Ulysses.

While I was out pulling weeds on the "north 40", I found a Praying Mantis that I brought up to the deck to show Laurie and since I had pulled the weeds she was hanging out on, I put her on our purple butterfly bush on the north side of the deck. When I finished weeding the section where I had found her, I came back up to the deck, put on my macro lens, and Miss Mantis was a very cooperative model. A tiny jumping spider with big, bright eyes jumped onto a leaf next to Miss Mantis, and seemed a little surprised to get a macro lens shoved in her face. Bright eyes had a spiky hairdo and isn't into shaving her legs.

After photographing Miss Mantis and Bright Eyes, I was taking a break, sitting on the deck, when what seem liked a swarm of hummingbirds flew by in what looked like a high speed ball of frenzied little birds. I put my zoom lens back on and just sat there, camera in hand, and one by one at least three (possibly four) different hummingbirds came back to feed on the butterfly bush. A Monarch butterfly flew around for the longest time before it finally decided to stop and have a snack on the butterfly bush.

When I first began pulling weeds, long before I found Miss Mantis, I had lost my Fitbit. I knew the general area it was in by where it synced with my phone, but I looked and looked, and Laurie looked and looked, but we couldn't find it. While I was looking, I spotted something under a weed that looked like it could be my Fitbit, but when I pulled the weed off, it was a fuzzy black caterpillar. I got it onto my glove and took it in to show Laurie that my Fitbit had morphed into a caterpillar. After photographing in on the table on the deck, I let the caterpillar go in another bunch of weeds.

Tristan came out to help look for the Fitbit and got the bright idea to see if there was a app for the phone to locate Fitbits. There were several, so I downloaded a mid-priced app for $3.99, which helped locate Fitbits by the amount of signal the app was receiving. We were getting "medium" strength readings near a bunch of weeds I had piled up, so we searched through the pile, but didn't find the Fitbit. Tristan went in to get water and I wandered over towards another pile of weeds that seemed too far away from where the Fitbit had been syncing with the phone before I got the locator app. The signal got stronger, so I started searching through the far pile of weeds, and there was my Fitbit hanging on a weed about halfway down in the pile. I had the Fitbit in a small pocked on my pants with a flap over the pocket. Somehow, the Fitbit caught on a big weed and was pulled from the pocket. 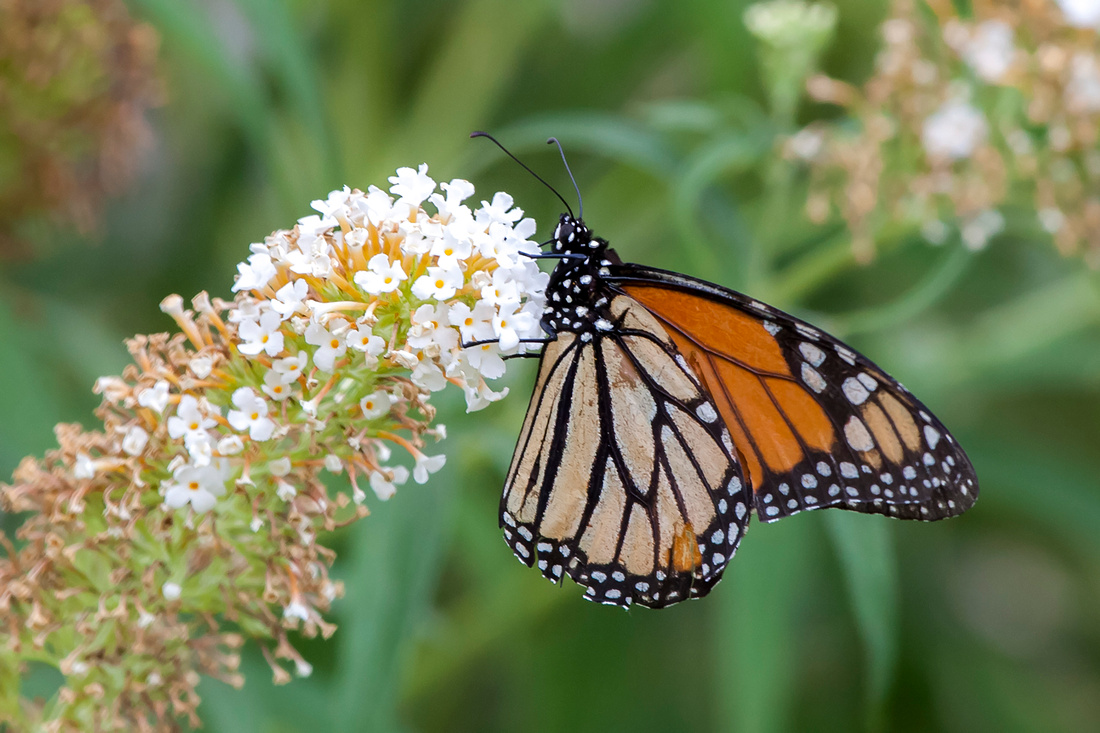 T & L Photos
Thanks, Miz Shaaz!
MizShaaz(non-registered)
Oh wow these are great captions, I'm constantly learning new things one here, Never heard of Fitbit before.
T & L Photos
Thanks, Teri! My Fitbit has ended up in the laundry hamper, but fortunately, I got it before going through the washer and dryer.
T & L Photos
Thanks, Herman!
Teri Dashfield(non-registered)
Macro shots are so much fun (except for spiders - ICK) and these are very nice. And thanks for letting us know there are apps to find your lost Fitbit cause mine has ended up in the washer and dryer a couple of times.
No comments posted.
Loading...
Subscribe
RSS
Recent Posts
Last Post on Zenfolio Walk, Run, Splash, Fly A Walk in the Snow We Wish You a Merry Catmas Cranes, Train & A Full Moon on Winter Solstice I Had A Dream Shrink Wrapped Fly Away Fire & Phantasm First Snow on the 2nd
Archive
January February March April May June July August September October November December
Timothy Price
Powered by ZENFOLIO User Agreement
Cancel
Continue