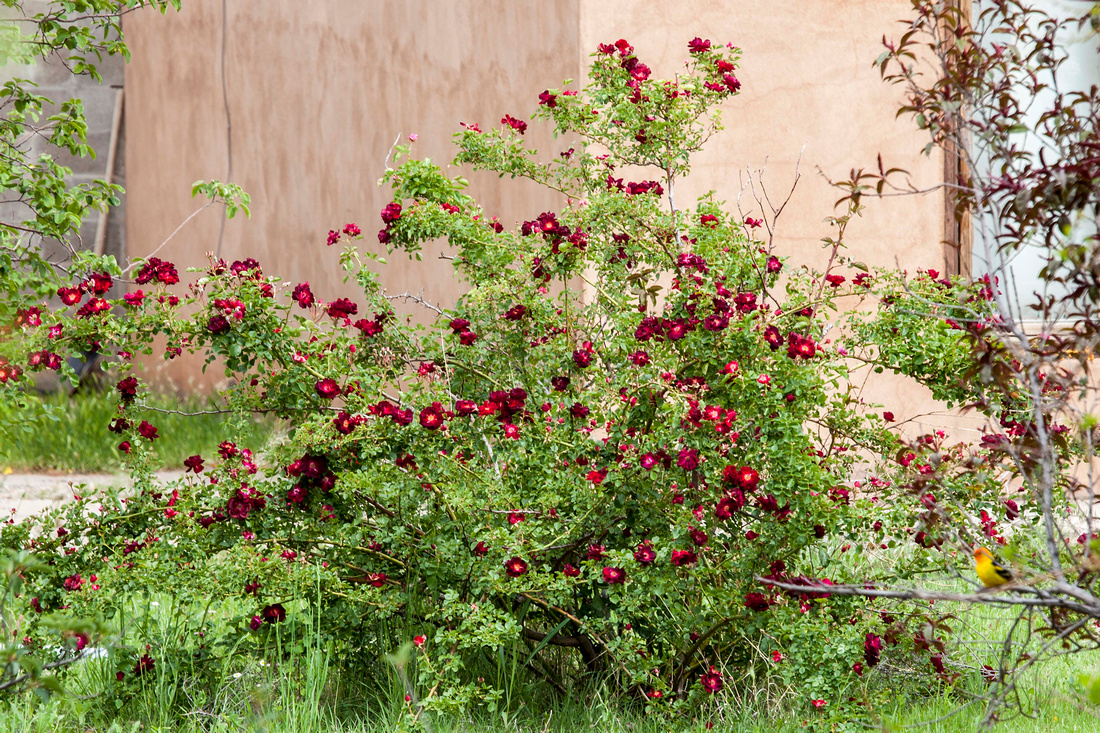 Dr. Huey in a yard on Corrales Road with a Western Tanager in the foreground

Driving through Corrales in the springtime, everything is green and teaming with life. Grasses and alfalfa carpet pastures, corn and green chiles poke new leaves through the loam of the plowed fields, while cottonwoods and elms shimmer in the breeze. Squirrels and bunnies scamper about teasing dogs  barred by fences. Coyotes yip, dart across the road, and disappear over walls; swarms of gnats and mosquitos stick to your windshield. Iris, daffodil and an occasional lily will show off their colorful blooms in yards along Corrales Road.

Finally there are the roses: large, gangly bushes sporting redish-purple petals with a yellow center. They are everywhere; spilling over railings, peeking over walls, and crawling under fences. These roses bushes are so prevalent in Corrales that people who drive out to visit in the springtime almost always ask what they are. I tell them it’s Dr. Huey, the patron rose of Corrales.

You would think that in a village well-known for produce available each summer at Wagner’s Farm and the Grower’s Market, you would see a large variety of roses lining its main road, sporting a kaleidoscope of color for visitors and residents alike to enjoy; and that would be the case if it were not for the harsh micro-climate in Corrales. Although, only a few miles north of Albuquerque, the low temperatures in Corrales run 10 to 20 degrees colder than Albuquerque, and the high temperatures are often 5 degrees hotter.  While the cooler night time temperatures are welcome during the summer months, the cold winters and hard frosts as late as the end of May and as early as the end of September have killed many roses in Corrales, leaving the root stock, the venerable Dr. Huey, to thrive and show off his multitude of blooms in the springtime.

While the temperature extremes take their toll on roses in Corrales, the cooler nights help to preserve blooms during the summer months — we rarely have bushes without blooms from the end of May to the end of October. Even our large Dr. Huey has bloomed multiple times on new canes he sent one after another long after other Dr. Hueys on the property had dropped their petals.

He stands out by himself, bowing like a lonely ascetic, praying to San Ysidro, who grants him the miracle of life, and the ability to bloom more than once.  San Ysidro, the patron saint of Corrales, looks favorably on the patron Rose of Corrales, as shown by the predominance of yellow buttons encircled by redish-purple petals lining Corrales Road in springtime. 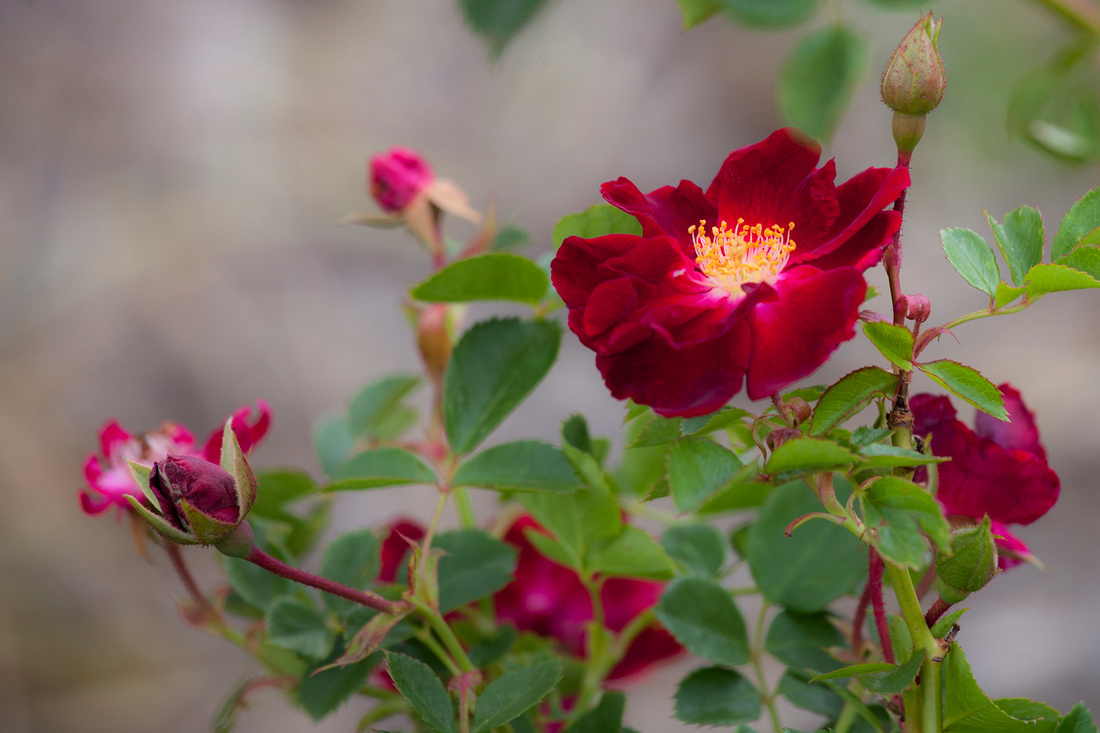 A Dr. Huey on our property that thrives without us watering it. Dr. Huey is very drought tolerant. 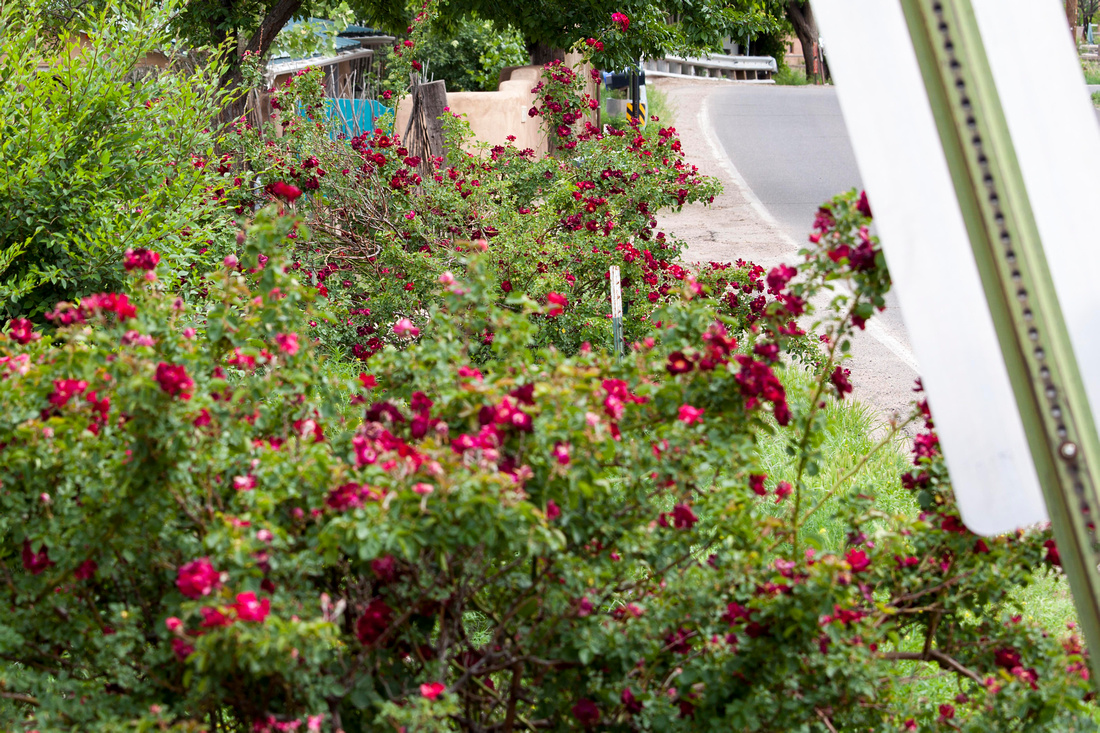 A hedge of Dr. Huey along Corrales Road. 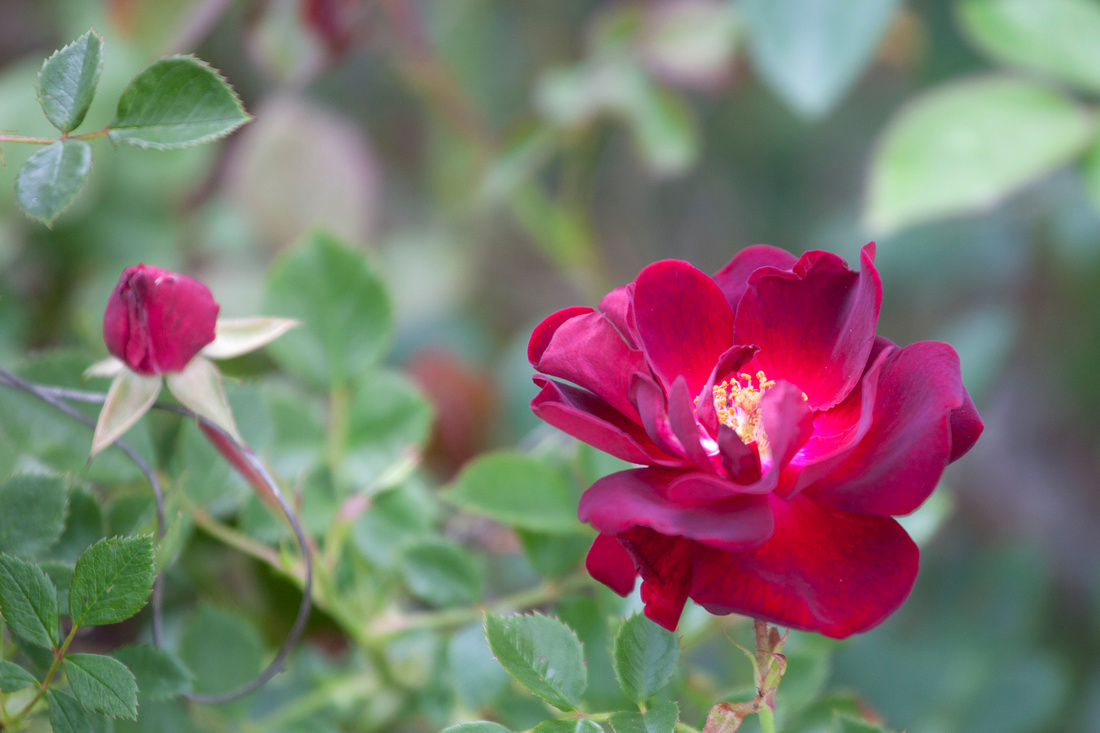 Another bloom from a neglected Dr. Huey on our property. 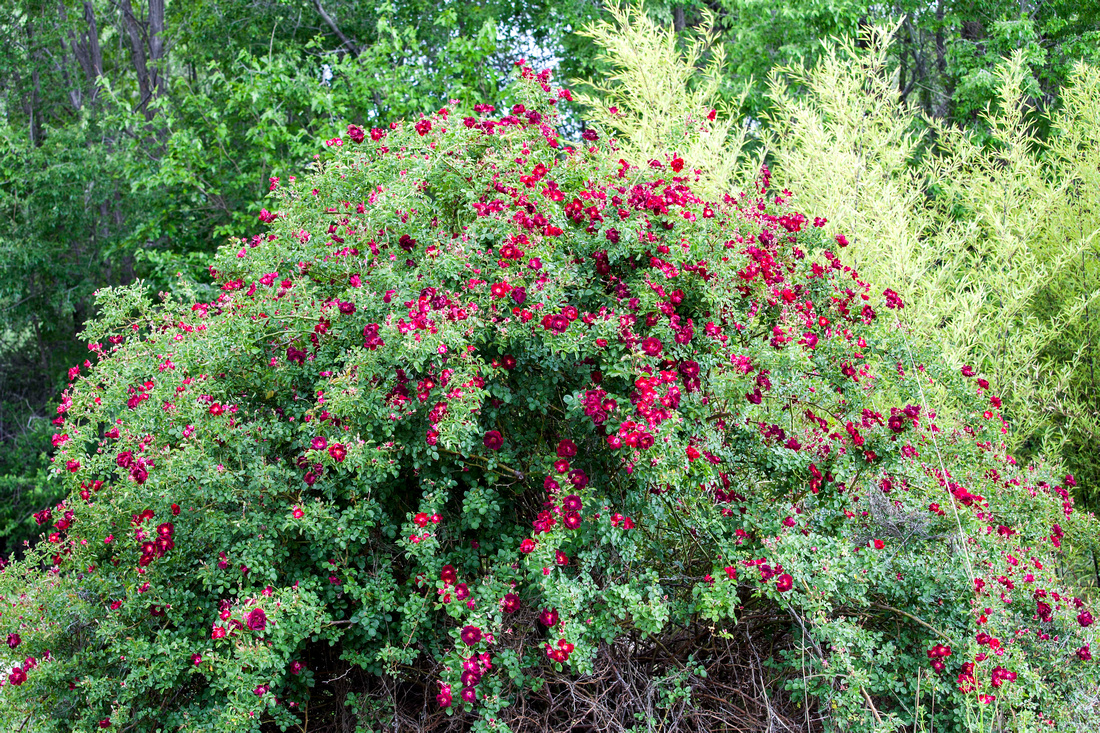 Our large Dr. Huey that blooms more than once. This one is irrigated.

NMbirder(non-registered)
I have a lovely Dr Huey in my Albuquerque Heights garden, which I cultivate & care for along with the "fancy" roses. I love the look of the blooms as they fade to dark maroon while holding onto their stems. They remind me of old wallpaper or tapestry material. Someone who had this property before me once planted a hybrid rose that failed, but it left "the Doctor"behind.
T & L Photos
Thanks, Julia! It hasn't been particularly warm here, but it's been a mild spring so everything is blooming early this year.
Julia Lund(non-registered)
We have a very old clambering rose in our garden. Unfortunately, it's still so cold here (I've never known this time of year to be so winter-like), it hasn't bloomed yet. Here's hoping.
T & L Photos
Thanks, Julie! You need to come visit NM one of these days.
Julie(non-registered)
tim.. What a magic post .. I love your writing. Makes me feel like I'm there. Wish I was! I adore roses that clamber over things and crawl under fences. As for the pics, just wonderful! Thanks for sharing :)
No comments posted.
Loading...
Subscribe
RSS
Recent Posts
Last Post on Zenfolio Walk, Run, Splash, Fly A Walk in the Snow We Wish You a Merry Catmas Cranes, Train & A Full Moon on Winter Solstice I Had A Dream Shrink Wrapped Fly Away Fire & Phantasm First Snow on the 2nd
Archive
January February March April May June July August September October November December
Timothy Price
Powered by ZENFOLIO User Agreement
Cancel
Continue