Of Dogs and Doppelgängers Just shy of a week ago, an old yellow lab came knocking at the door asking to come inside. The cats said "No!" and he sat outside looking pathetic. Determined to get inside, he took the door handle in his mouth, turned it and pulled on the door, but the door was still sticking from the rain, and he was not strong enough to pull it open. He didn't have a collar and he didn't want to find his way home, so I started calling around to see if any of our neighbors knew who he belonged to.  No one knew who the dog belonged to so I called Animal Control to see if a yellow lab had been reported missing, but Animal Control had closed for the day. After a few more calls, I was told no labs had been reported missing, and I was given the number for dispatch. About 30 minutes after describing the dog to a dispatcher, a police officer showed up. The officer said he recognized the dog, but he didn't know who it belonged to. Old Yellow eagerly jumped into the patrol car and the officer told me he was taking the dog to the kennel, where they could check for a microchip, and the dog could have a warm place to stay until the owner was found.  About 30 minutes after the officer drove off with the dog, one of our neighbor's knocked on the door with the dog's owner. She was walking her dogs when Old Yellow's owner stopped and asked if she had seen a yellow lab. They took off for the kennel after I explained what had happened. The next day, my neighbor said they drove straight over to the kennel (only a mile from our house), and the office had not dropped the dog off before they got there. Apparently the officer was making his rounds with Old Yellow keeping him company. They called dispatch, and my neighbor went home, so she assumed that the officer ended up taking the dog home instead of to the kennel in the end. Diné poofed-up and ready to defend her turf 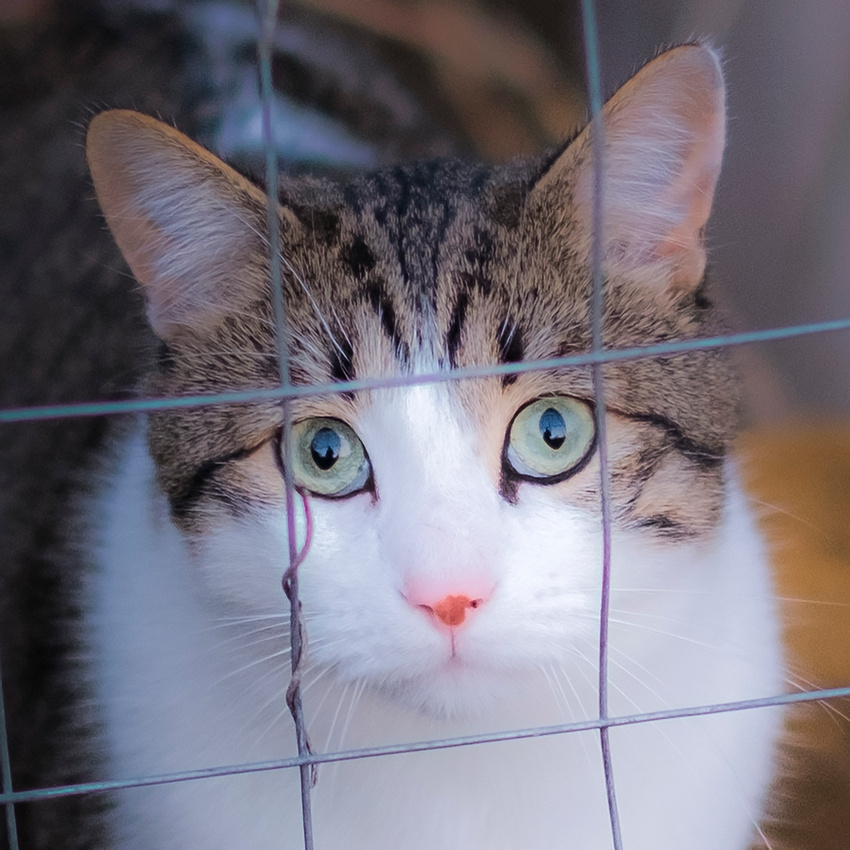 Laurie was on the treadmill when I heard her say "Oh! Who are you?" She said a tiger-striped kitty that looked like a light-colored, ghostly Spunk came up to the glass in the door and looked right at her. I went out on the deck, turned on the lights and called "Kitty kitty!" but I didn't see or hear a cat. I came back inside and called Spunk, and he came running from the catio poofed-up from head to tail looking nervously out of the glass in the French doors, and anxiously pacing back and forth. I stretched out on the couch and Spunk snuggled up on me and stayed snuggle on me for an hour or so until I got up. After that, he stayed very close to me and Laurie, and got on my lap whenever I sat down. We decided he had come face to face with his doppelgänger, and was very disturbed by the experience.

T & L Photos
Thanks, Julie!
T & L Photos
Thanks, Miz Shaaz!
Julie(non-registered)
Tim, these are beautiful photos .. Heavenly. yellow looks so sad. You have such a terrific ability of photographing animals .. And everything else too btw. What a wonderful post. I hope yellow made it home :)
MizShaaz(non-registered)
Beautiful looking Lab.. But Kitties don't play when it comes to protecting their territory... Glad he found a warm place to hang.. Nice of the officer to keep him company, it's really scary when animals get lost because there's a lot of cruel people out there in this world.
T & L Photos
Thanks, Couriers! Kitties do tend to be adverse to change.
No comments posted.
Loading...
Subscribe
RSS
Recent Posts
Last Post on Zenfolio Walk, Run, Splash, Fly A Walk in the Snow We Wish You a Merry Catmas Cranes, Train & A Full Moon on Winter Solstice I Had A Dream Shrink Wrapped Fly Away Fire & Phantasm First Snow on the 2nd
Archive
January February March April May June July August September October November December
Timothy Price
Powered by ZENFOLIO User Agreement
Cancel
Continue