It Was A Hot One 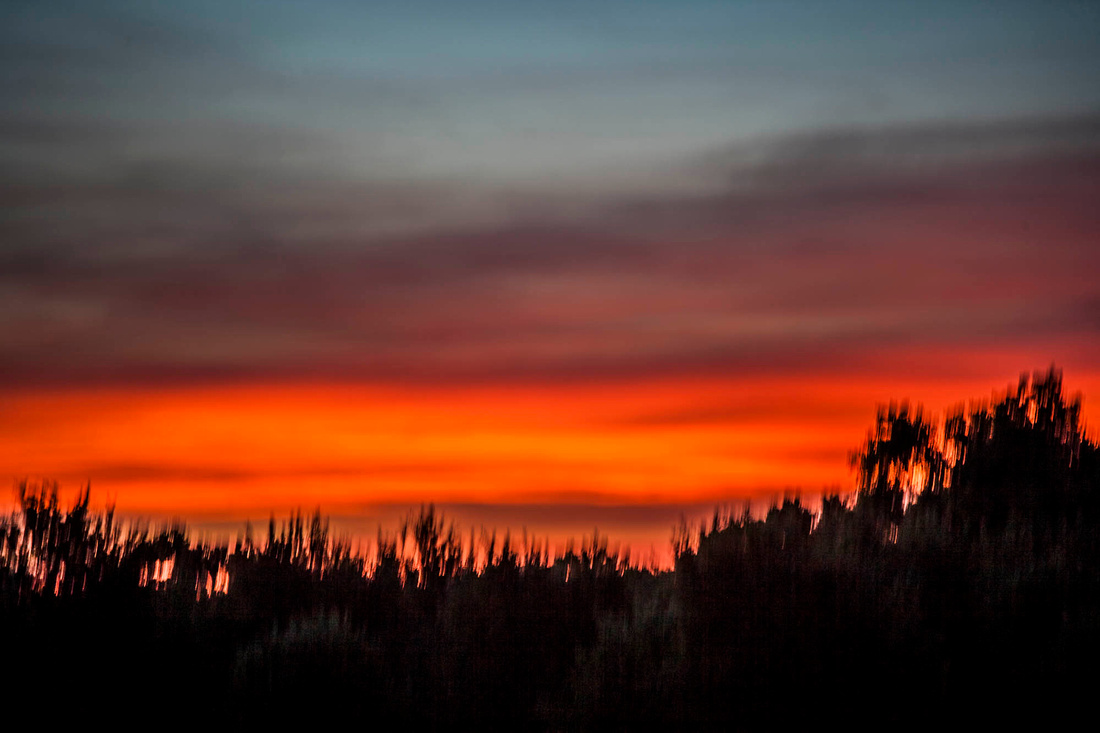 The post sunset glow of smoke from a fire in the Jemez northwest of Albuquerque.

The thermometer mounted six feet off the ground in the middle of the property measured 105º F (40.6º C) this afternoon and the thermometer on the deck read 103ºF. Whether or not either were accurate, it felt like 105º when I was out moving hoses around in the middle of the day.  Spunk finally talked us in to letting him outside into the big free world beyond the catio yesterday. He stayed out and explored most of the day Friday. This morning, he saw Rosencrantz doing his morning catnip roll through the bay windows in the kitchen and asked to go out. I let him out and about 10 minutes later I walked by the sunroom and noticed all the cats gathered by the French doors. I walked over to see what was going on and I saw Spunk chasing the mournful kitty through the labyrinth. After they made the forth lap that I saw, a went out and said "Spunk? Why are you chasing the mournful kitty in circles?" Spunk stopped, fully poofed and looked at me. I walked over to him and he growled at me, but he let me pick him up. I took him back inside. He was quite proud of himself. He went back out with Laurie, and then while I was at the postoffice, she said he demanded to come back in. I think it was getting too hot for him out in the cold cruel world. 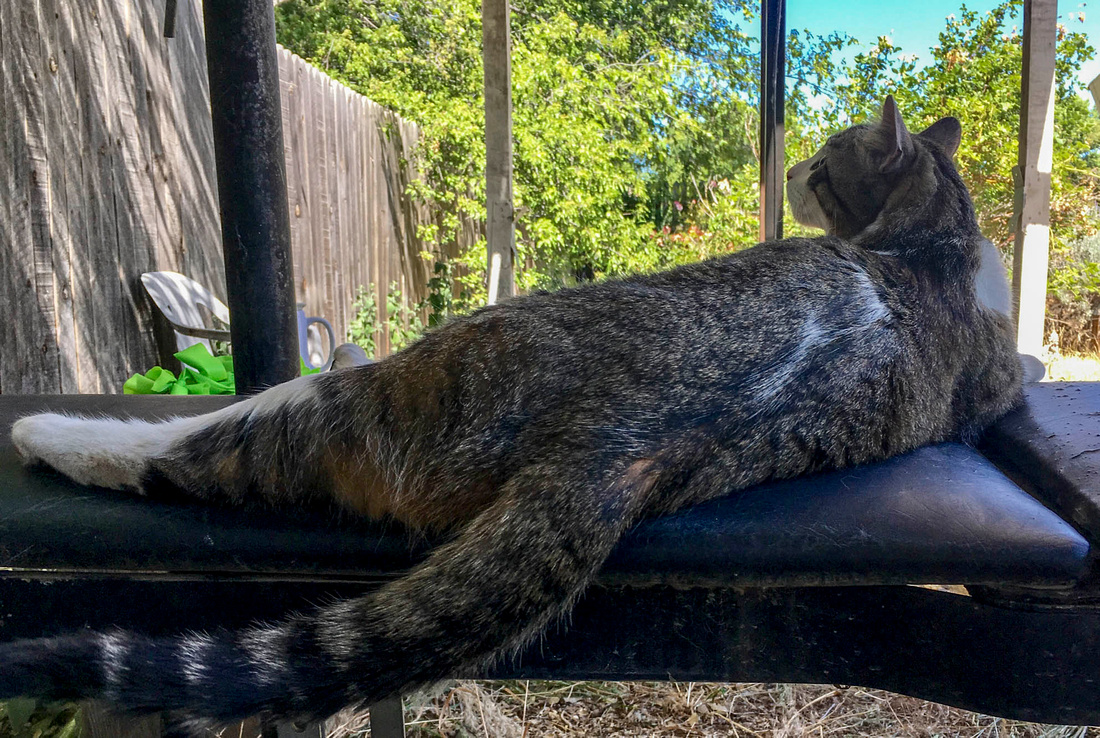 Spunk on his first day outside working out on the benchpress (photo by Laurie). 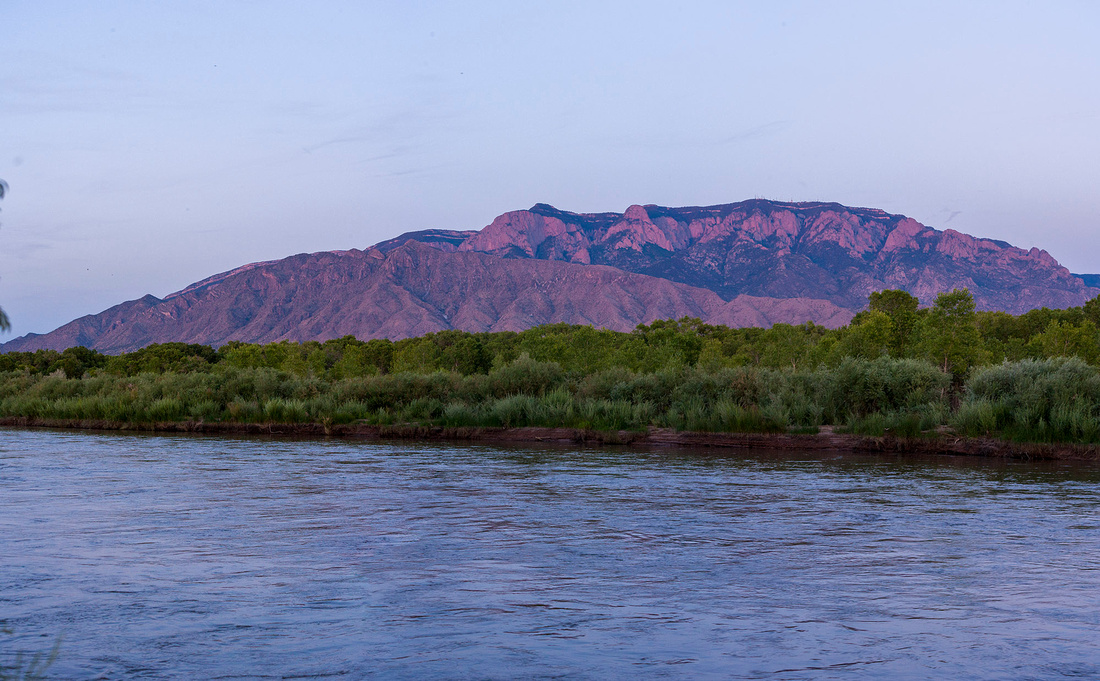 The Rio Grande is down to normal levels about two or three feet below what is was running yesterday. 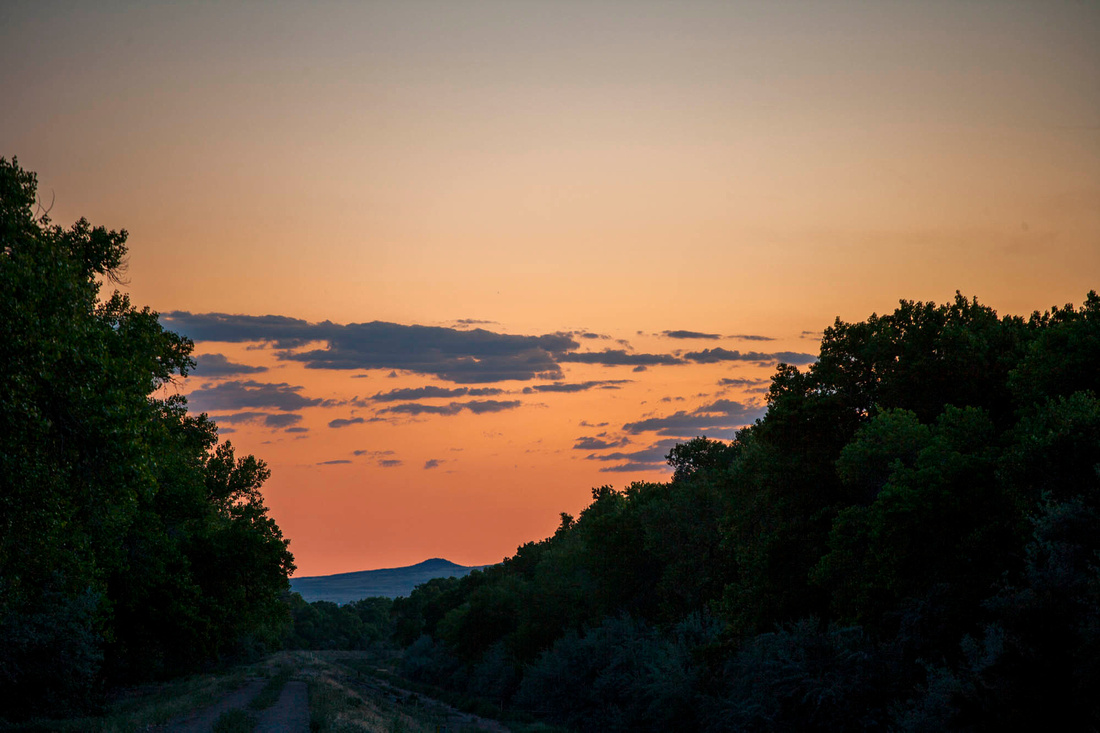 Orange skies to the south after sunset. 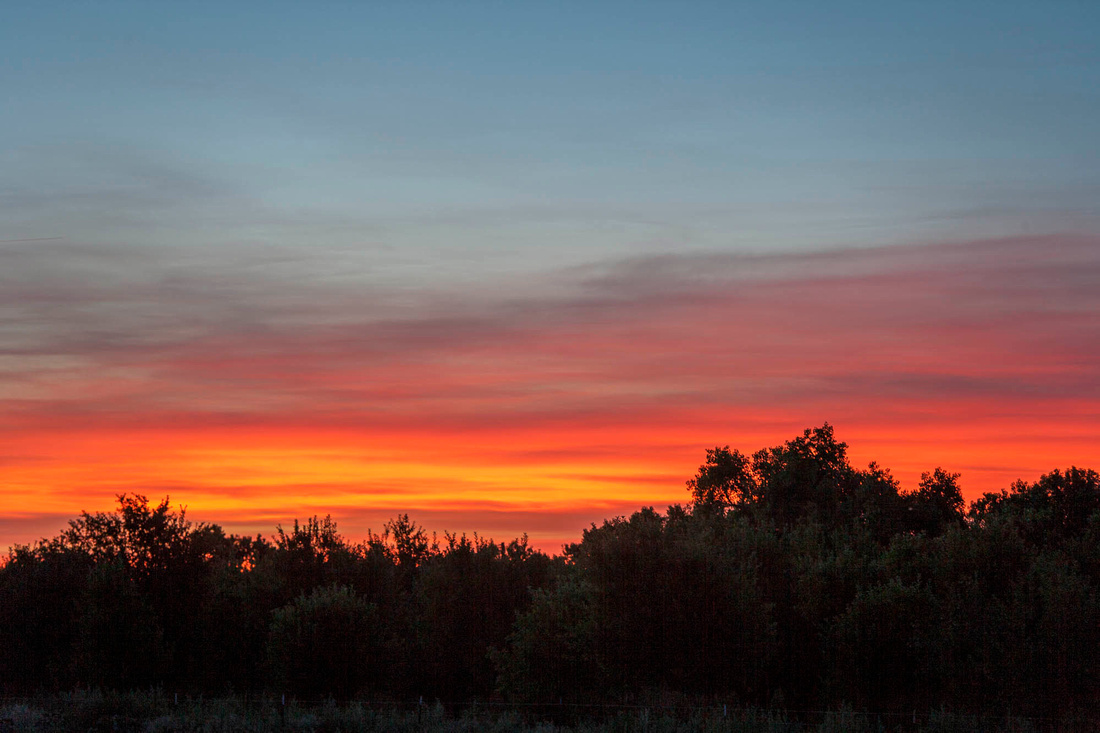 Red sky after sunset from smoke.

The Average White Boys have been at it again and produced another music video. This one started with me turning Inchcock’s woeful Friday into verse. His line “I was in great pain, and yet high spirits” inspired me to paraphrase various aspects of his woeful day in verse that would somewhat go to the Beatles “A Day in a Life” and I called it “A Day in the Life of Inchy”. I put the verse together quickly as a comment on his blog, and since I hadn’t listened to the original song for awhile, the words generally fit to a loose tune in my head. After I posted my verse in his comments section, I listened to the original song and realized I had forgot the last verse. Silly me or “Tsk!” as Inchcock would say.  Then I started trying to fit the verses to the music, modified them, got very ambitious and put them to music. “A Day in a Life” is not an easy song to sing, especially for a non-singer like me, so making the “Day in the Life of Inchcock” parody was quite difficult for me, but it was a very good exercise in attempting to do my talking/singing style, and a good technical exercise in that it took 4 tracks to come up with the final version — one with the music and three vocal tracks to make everything work and sound the way I wanted them to given the many limitations of my vocal ability. It works pretty well for parody (you can follow along with the words below the video).

A Day in the Life of Inchcock

Great pain, high spirits today oh boy
A lucky man standing by the Methodist Church
I think I should be rather sad
But I just had to laugh

I took the photograph
Out the window, mind you houses and cars
Off to Sherringham for shots, so quick, times have changed
Nicole the nurse she just stood and stared
Trying to stop my blood
Was this really it
Was I off to see the Lord

A Whoopsiedangleplop today oh boy
The phone went off a dingling and a dangling
T’was the nurse bitching about my ambling
‘You’re not in your Flat?’
And you don’t have the book
I’d love to turn you Down

Got back, had a Weeee!
Refreshed, and accident Free!
Got back out front and had a cup
Door bell rang and I noticed it was late
It was the Nurse she had no hat
Up the lift in seconds flat
She had a firm, tight end that was smokin’ hot
She poked me in the tummy and I came out of my dream…

Great pain, high spirits today oh boy
Four thousand holes poked in me tummy there were
Although the holes where rather small
I couldn’t count the lot
We still don’t know how many holes it takes to fill old Inchcock

I'd love to turn you Down

T & L Photos
Thanks, Julie!
Julie(non-registered)
Wow Tim, hot hot hot! Love the images .. so good! :D nice shot of that gorgeous kitty Spunk
T & L Photos
Hi Lavinia! Spunk would have fun with that. It might have hit 100 for a bit yesterday, but when I looked at the thermometer in the afternoon it was 92. Stayed pretty warm all night in the 60's.
Lavinia Ross(non-registered)
I love Neil Young's music. "A Cat With No Name" would be right up your alley, starring Spunk. :-) I'll have to give the Cowboys song a listen. I am not familiar with that one.

T & L Photos
Hi Lavinia! Hmmm! Maybe that's why I don't like the sound of my voice. I've never been a fan of Neil Young. But thanks for the compliment, he has done some great music out of a very long list of songs he's done over the years. One song I always liked by him is "Are There Any More Real Cowboys?"

"A Cat With No Name"? I'm not sure you should be giving me ideas or encouraging me.

Wednesday or Thursday morning the low was 37º F with a 95º F high at the house. Then "boom" we have a high of 105º F a few days later. The low this morning was 53º, so we are still getting 50 degree temperature swings between day and night. Besides smoke on the northern horizon from forest fires, we've had very clear skies the last few days.