Cutting up on Friday the 13th 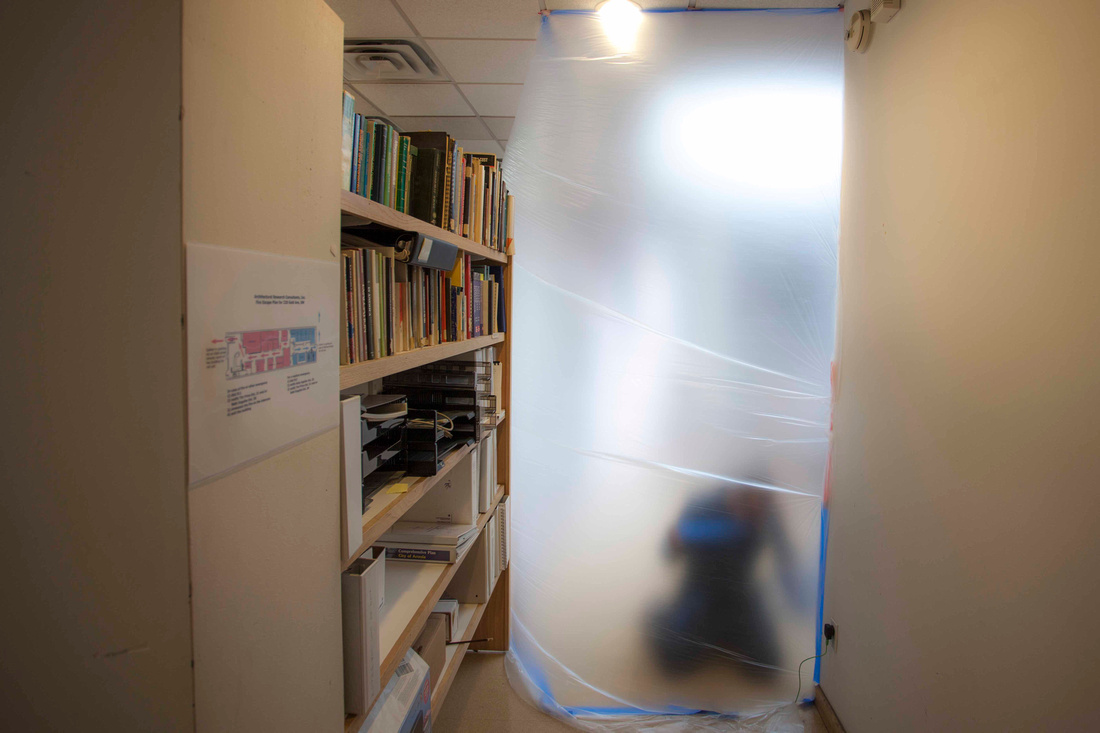 What do you do when you have to cut a hole in the floor to dig up the sewer line in the back of the office on Friday the 13th?  First you make like Cristo and wrap the library in plastic. 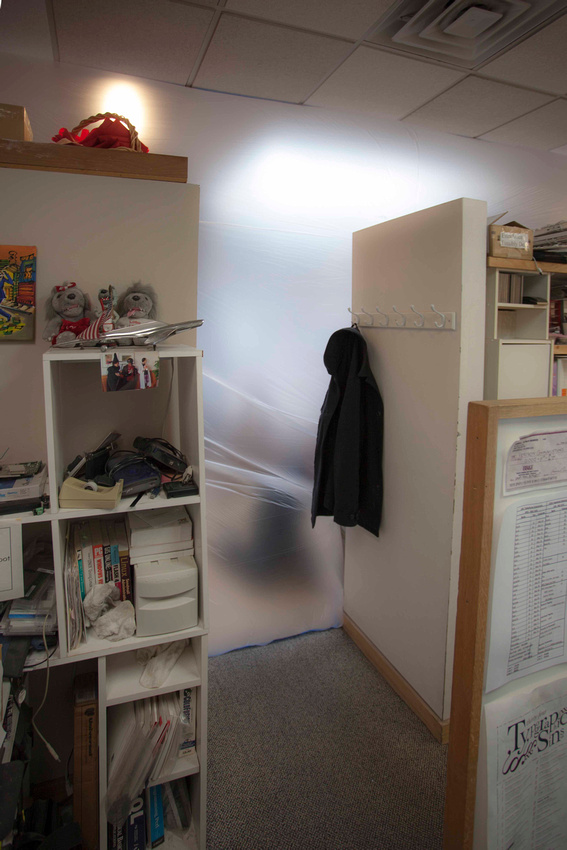 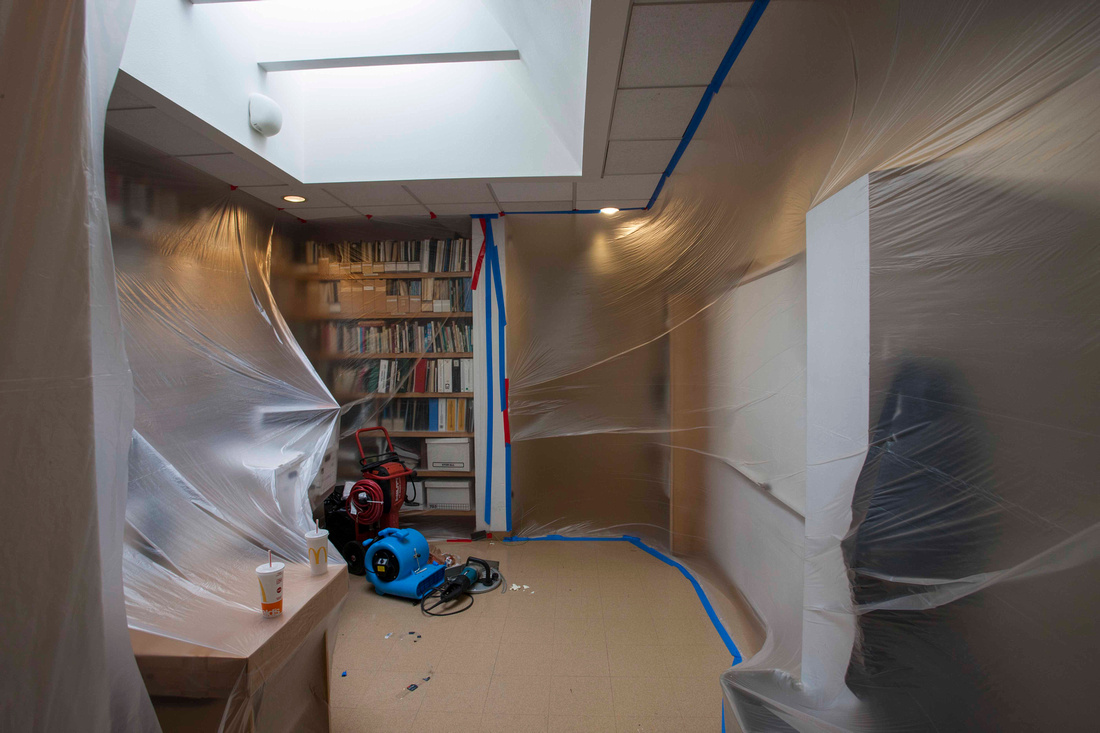 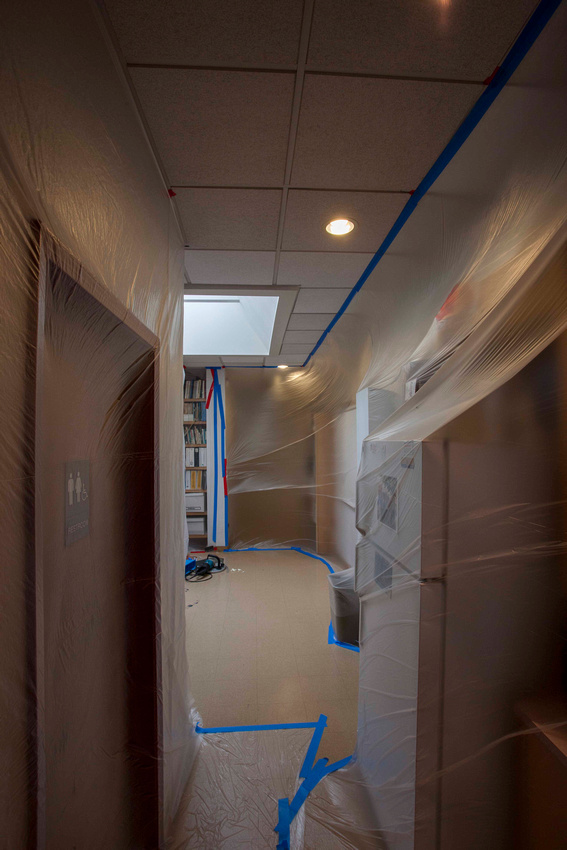 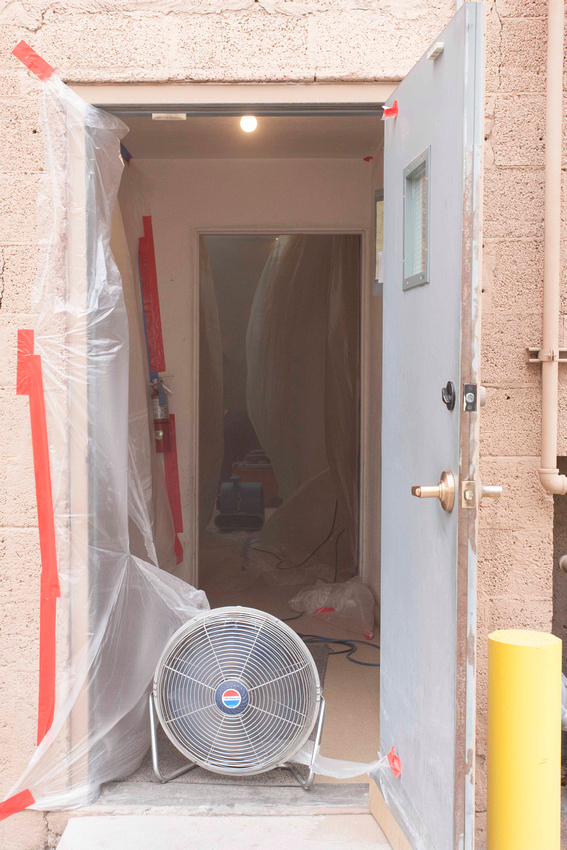 Then you create a lot of dust cutting up the slab and jack hammering the concrete out of the floor. 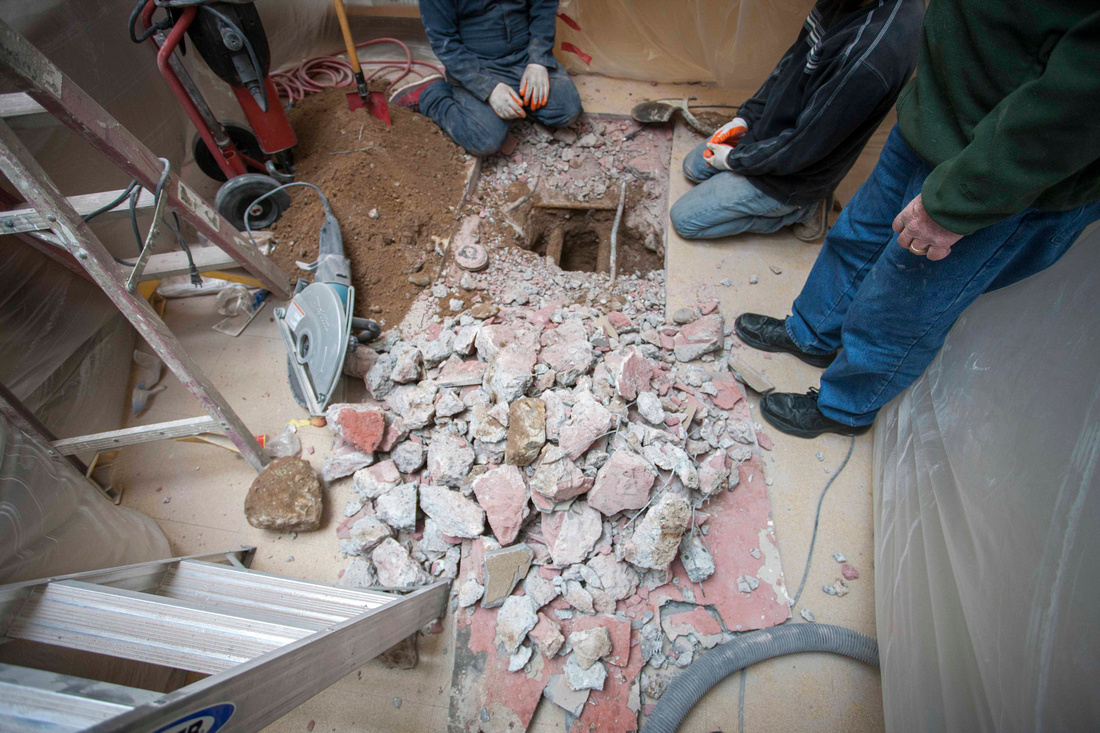 Since we are in New Mexico we had to stand and kneel around the hole like we were worshiping it. 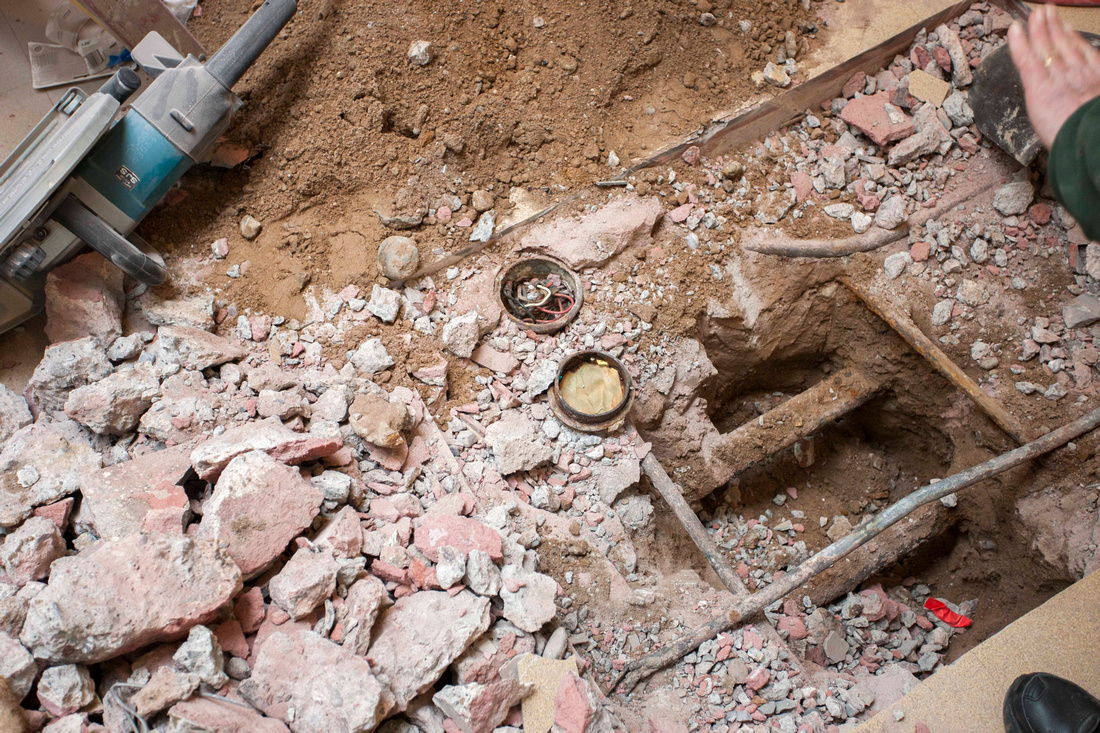 What's the chance of the same guy who sawed into the electrical conduit that no one knew ran under the deck on the roof cutting into two electrical conduits in the slab? 100% chance in a 123 year old building. I got out the meter and the wires in the box have 115 volts on them. There are probably various old floor plugs covered up under the floor all the way to the front of the building. Since we don't need unused, "hot" electrical wires under our feet, I called our electrician and he's going to come out Monday, trace the wires to the breaker box and disconnect them. 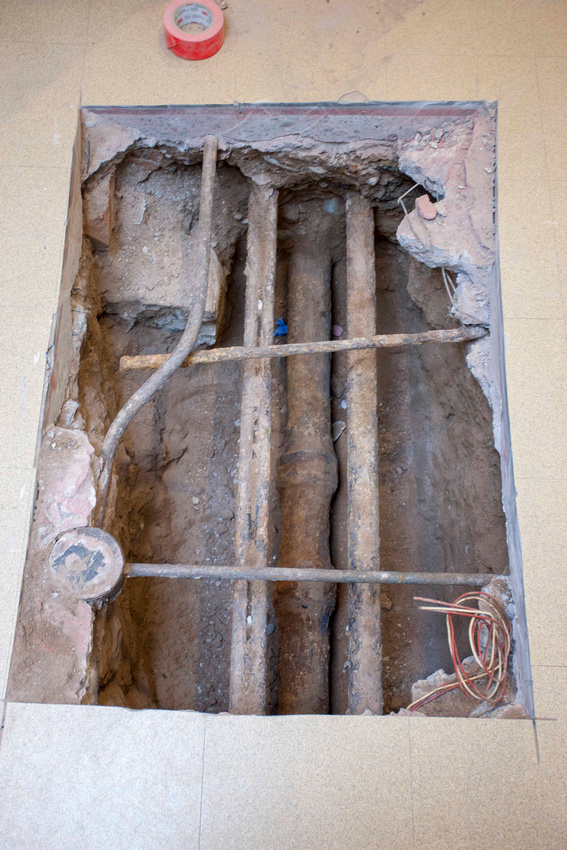 Laurie says the excavation work looks like old Roman ruins. It does in a way. The sewer line is under and between the water lines and an old gas line. The clog is between the two joints according to the guy who ran a scope through the sewer line. Since a roto rooter couldn't clear the pipe, we figured it had rusted out and collapsed, but the sewer pipe is not leaking, so the pipe has a mystery clog until the plumber cuts out a section of it to put in a clean out on Monday. 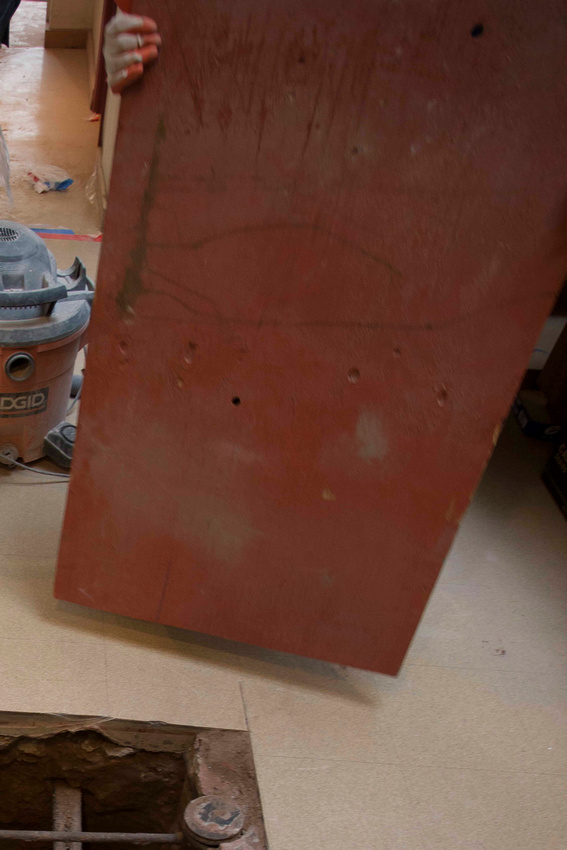 After all the cutting up and digging around, we got board and covered the hole with a piece of plywood until the plumber can come out on Monday. 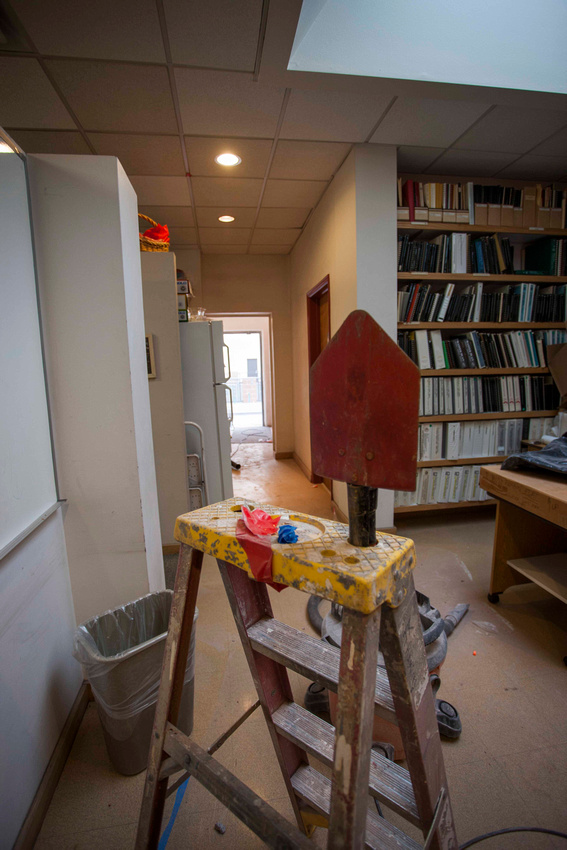 T & L Photos
Thanks, Julie! It's all fixed. We traced the two breakers the hot wires were on, turned them off and so far found nothing turned off. Hot wires to nowhere under the floor was not good. The rest of the wires had already been disconnected.
Julie(non-registered)
You are amazing! What a big job .. hope it all got fixed and the electrician did his magic
T & L Photos
You are right, Susan! Thanks.
Susan Hunter(non-registered)
The spiders are not the nightmare here. Good luck with repairs-don't bust the water line.
T & L Photos
Hi Harry. Sounds like it would have been easier to have a normal leak.
No comments posted.
Loading...
Subscribe
RSS
Recent Posts
Last Post on Zenfolio Walk, Run, Splash, Fly A Walk in the Snow We Wish You a Merry Catmas Cranes, Train & A Full Moon on Winter Solstice I Had A Dream Shrink Wrapped Fly Away Fire & Phantasm First Snow on the 2nd
Archive
January February March April May June July August September October November December
Timothy Price
Powered by ZENFOLIO User Agreement
Cancel
Continue