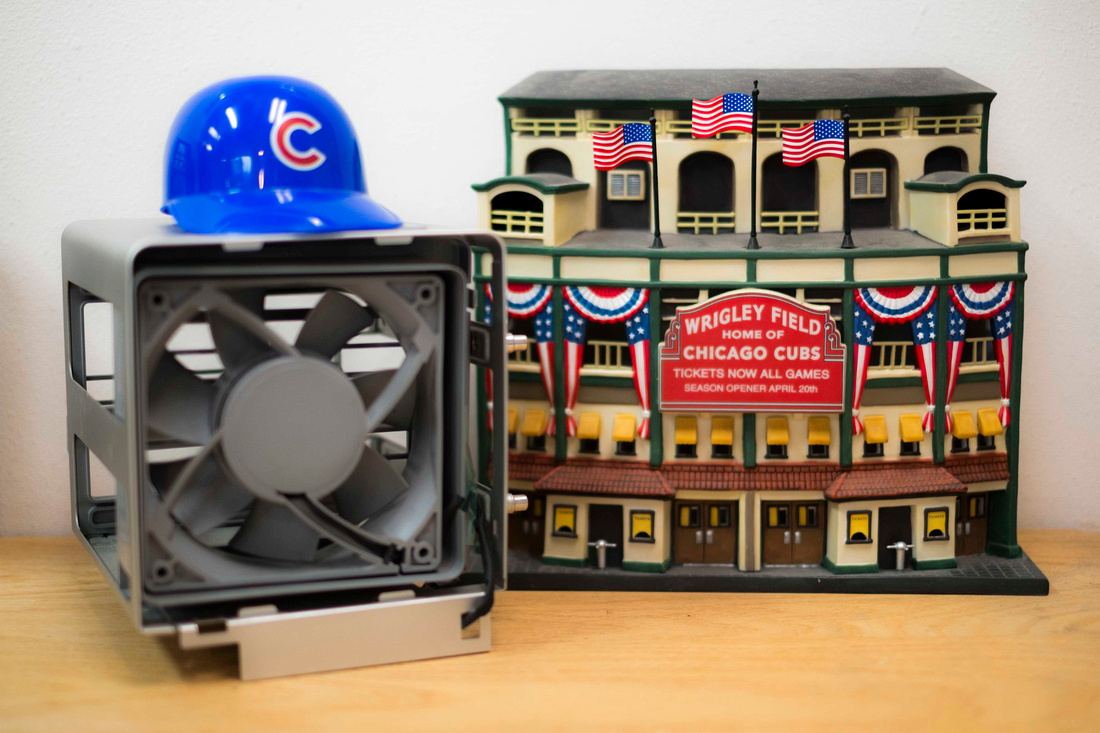 While John was in our office in the late afternoon, he asked what the fan assembly sitting on our desk was. I told him it was a whiny fan I replaced in Bruce's old computer. John said "Like all Cubs fans?"  Bruce said "Good one!" and put his Cubs cap on the fan. We cleared the junk from around the fan, set Bruce's model of Wrigley Field behind it, and I got a photo of a "whiny Cubs fan."

However, the Cubs became the champions of the National League Central Division last night even though they lost their game against the Brewers, because the Cardinals also lost to the Giants; therefore two losses made the Cubs a winner and the Division Champions, if I have it all straight. So even though the Cubs lost, the fans have nothing to whine about, because they are now the division champs, which is deserving of the simple title — "Cubs Fan".

T & L Photos
Thanks, Lavinia! For as little sports fan as I am, they are my favorite team.
Lavinia Ross(non-registered)
Nice photo, Tim! Congratulations to your favorite team. :-)
T & L Photos
Thanks, Susan! Glad I got a smile out of you.
Susan Brandt Graham Photography
Wonderful photo, and I love the story. Sort of, boys and their toys... Made me smile!
No comments posted.
Loading...
Subscribe
RSS
Recent Posts
Last Post on Zenfolio Walk, Run, Splash, Fly A Walk in the Snow We Wish You a Merry Catmas Cranes, Train & A Full Moon on Winter Solstice I Had A Dream Shrink Wrapped Fly Away Fire & Phantasm First Snow on the 2nd
Archive
January February March April May June July August September October November December
Timothy Price
Powered by ZENFOLIO User Agreement
Cancel
Continue