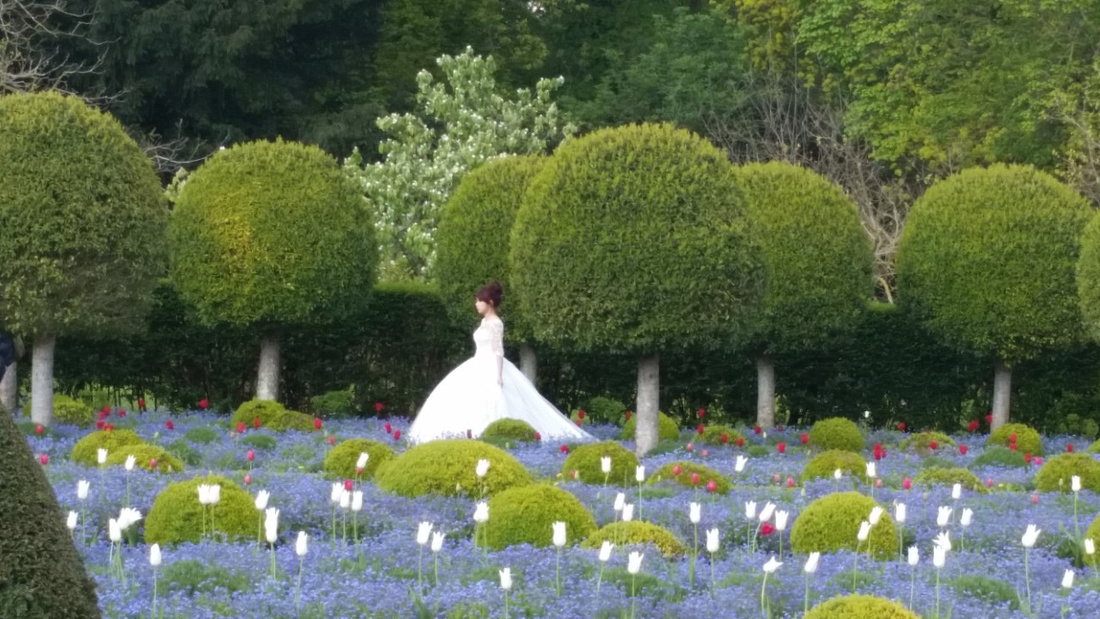 Anyone who studied photography and art during the last third of the 20th Century has probably heard of Henri Cartier Bresson and most likely familiar with some, if not all, of the photographs from his book “Images à la sauvette” fist published in 1952. The English version is titled “The Decisive Moment”, which became an artist movement to capture photographs in the moment (normally on 35mmm film) that were aesthetically well beyond “snapshots” but generally less formal than images produced with large and medium format cameras. Snapping photos in “The Decisive Moment” still produced studied, technically proficient and well composed images that had something to say either as pure art, social commentary or both.

In a series of emails about the bridge photo I posted the other night, Marina included today’s photo in one of the emails with the following explanation:

“I have attached a pic I took in the park across the street from where we lived in Paris (the parc de Sceaux).  I was returning through the park from a shopping trip in Sceaux, when I saw this bride having her photo taken in one of the gardens.  So I snapped this pic.”

My response to the photo started an interesting exchange.

Timothy:
“Wow! Just Wow! That is a fantastic photo on all levels of subject, art, artistry, composition, color, repeating forms, layers. Keep close tabs on this one, Marina, there are lots of people who would steel it, and call it their own.”

Marina:
“Ha!  methinks the compliments aboundeth beyond what the photographer deserveth.  But I like it too :)”

Timothy:
“Seriously, Marina, not at all beyond what you deserve. It really is a fantastic photo. You saw it and you got it. Cartier Bresson’s “Decisive Moment” perfectly executed.”

Marina saw the image was worth photographing, photographed it and produced a superb image that meets all the requirements of art, composition and commentary. The white tulips repeat the color and shape of the bride’s dress; there are layers of repeating colors, shapes and forms; the composition is almost a perfect “rule of thirds”, with the bride’s triangular form falling square inside the “golden rectangle”. A bride, as well groomed and traditional as the Parisian garden, posing for wedding pictures seems so counterculture to the modern tastes that often look askance at marriage — Marina has perfectly executed “The Decisive Moment”.

Marina Peters-Newell, Ph.D. is the Lower-division Language Coordinator for the Department of Foreign Languages & Literatures
at the University of New Mexico. Marina is a long-time friend. She and Laurie are members of a book group (the group met at our house last week), and we have participated in cultural events she has hosted as part of Language Department at UNM for many years.

T & L Photos
Thanks, Julie!
Julie(non-registered)
Oh to think that she just saw this and went click! One of those pics that is timeless in its beauty ... sigh :)
T & L Photos
Thanks, Couriers!
T & L Photos
Thanks, Teagan!
Animalcouriers(non-registered)
It really is a stunning photograph.
No comments posted.
Loading...
Subscribe
RSS
Recent Posts
Last Post on Zenfolio Walk, Run, Splash, Fly A Walk in the Snow We Wish You a Merry Catmas Cranes, Train & A Full Moon on Winter Solstice I Had A Dream Shrink Wrapped Fly Away Fire & Phantasm First Snow on the 2nd
Archive
January February March April May June July August September October November December
Timothy Price
Powered by ZENFOLIO User Agreement
Cancel
Continue