The Undertaker and the Cranes 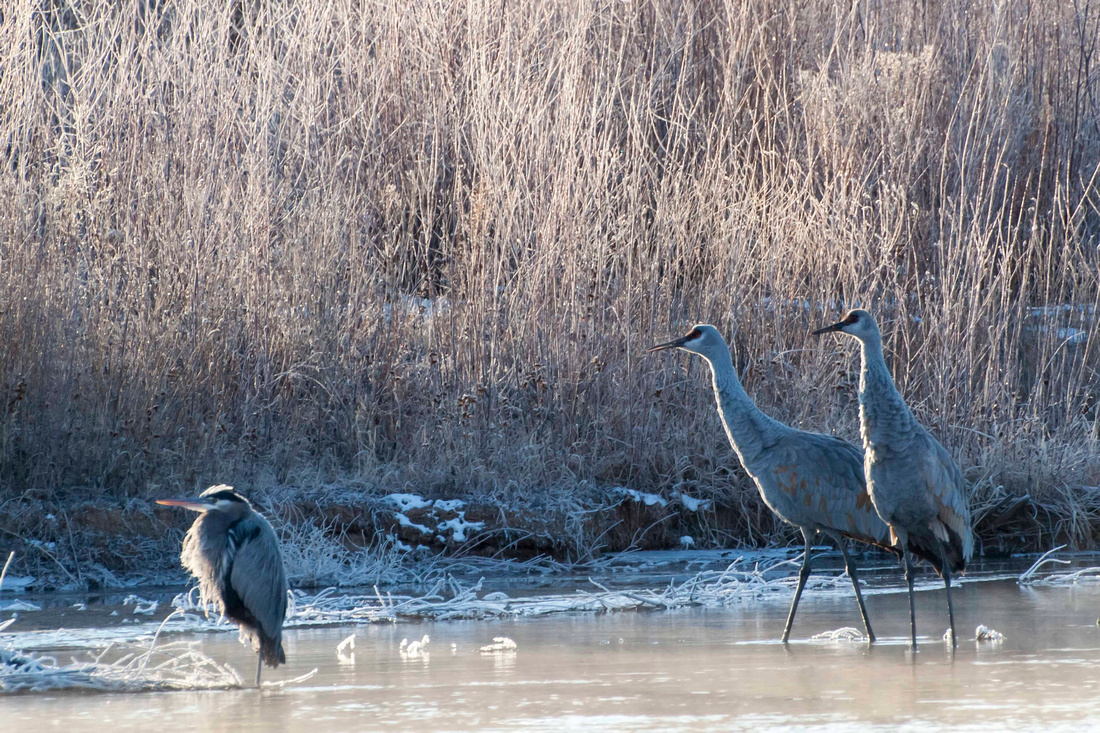 “What’s that?” Sandy asked Hilly as they walked in the frozen wasteland that had set upon the river at sunrise on all hallows' eve. “Looks like a ‘Great Blue H’ to me.” Hilly answered as they slowly advanced on Harry Blue as he stood like a frozen undertaker, hoarfrost clinging to his beard like the frosty foliage frozen around him. Sandy stopped with the icy water tickling her ankles and asked “A Great Blue H? Can you be more specific?” Hilly thinking for a few seconds said “I know Great Blue H’s are kind of like us, but they are known to be shape shifters.” “Shape shifters?” Sandy was skeptical. “Oh yes. It looks much smaller than us right?” Sandy agreed. “But you can’t judge it by how it stands there like a small statue frozen by the morning sun, because when it flies it makes a complete transformation…” “Really?” interrupted Sandy. “Yes!” continued Hilly. “When it flies its wings expand to be much larger than ours, its body stretches out and its neck becomes longer and more sinuous than ours.” Sandy stood in place looking at the icicle clad form standing in front of her and said “Wow! That’s unbelievable.”  Hilly surveying Harry Blue continued “There’s more. See how long and large its beak is?” Sandy nodded. “They say that on all hallows' eve they fly around using their large beaks to collect lost and wandering souls that have been haunting all kinds of beings in this realm, and then the Great Blue H’s turn the souls they collect on all hallows' eve over to the proper authorities in the next realm on the day of the dead.” “The proper authorities?” Sandy questioned. Hilly looked at Sandy “You know. Whichever of the gods will claim them.” A shiver ran down Sandy’s back and she said “Oh! So that’s why it looks like an undertaker.”

T & L Photos
Thanks, David. Most of the kitties gave me the cold kitty shoulder treatment for abandoning them. Lola and Najar were very happy to seem fro the minute I walked in the door.
David(non-registered)
A "shape-shifter" story.
It must be great to be home with Laurie and the kitties. Hope the kitties didn't give you the "who's the stranger" treatment. :)
T & L Photos
Thanks, Harry!
Harry(non-registered)
Great image. Happy Halloween :-)
T & L Photos
Thanks, Lavinia!
No comments posted.
Loading...
Subscribe
RSS
Recent Posts
Last Post on Zenfolio Walk, Run, Splash, Fly A Walk in the Snow We Wish You a Merry Catmas Cranes, Train & A Full Moon on Winter Solstice I Had A Dream Shrink Wrapped Fly Away Fire & Phantasm First Snow on the 2nd
Archive
January February March April May June July August September October November December
Timothy Price
Powered by ZENFOLIO User Agreement
Cancel
Continue