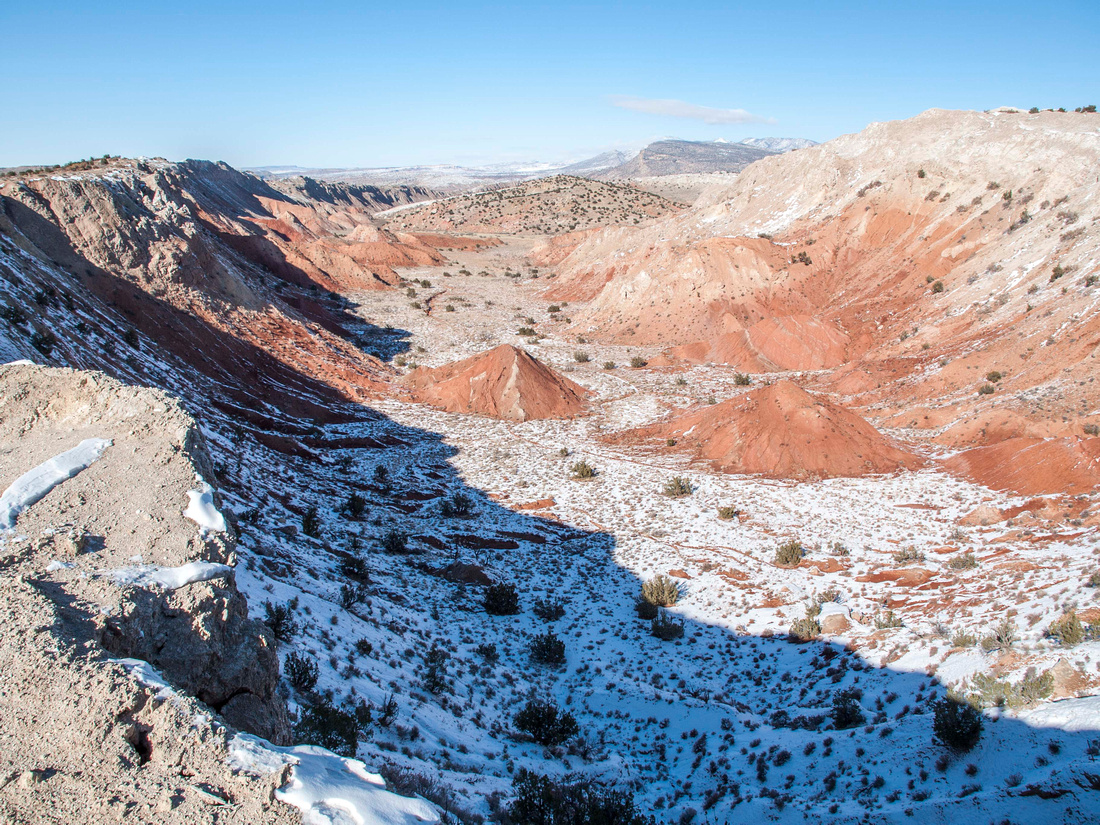 Looking north up a valley with the Jemez Mountains in the background.

White Mesa is about 45 miles north and west of Albuquerque, west of San Ysidro, NM, south of the Jemez Mountains. It's called White Mesa because of the white gypsum cliffs on the north side of the mesa — you pass a gypsum mine on the east end of the mesa on the way to the trails. There are eggshell-like rock domes, sulfur springs and a lot of colorful geology that makes up White Mesa. 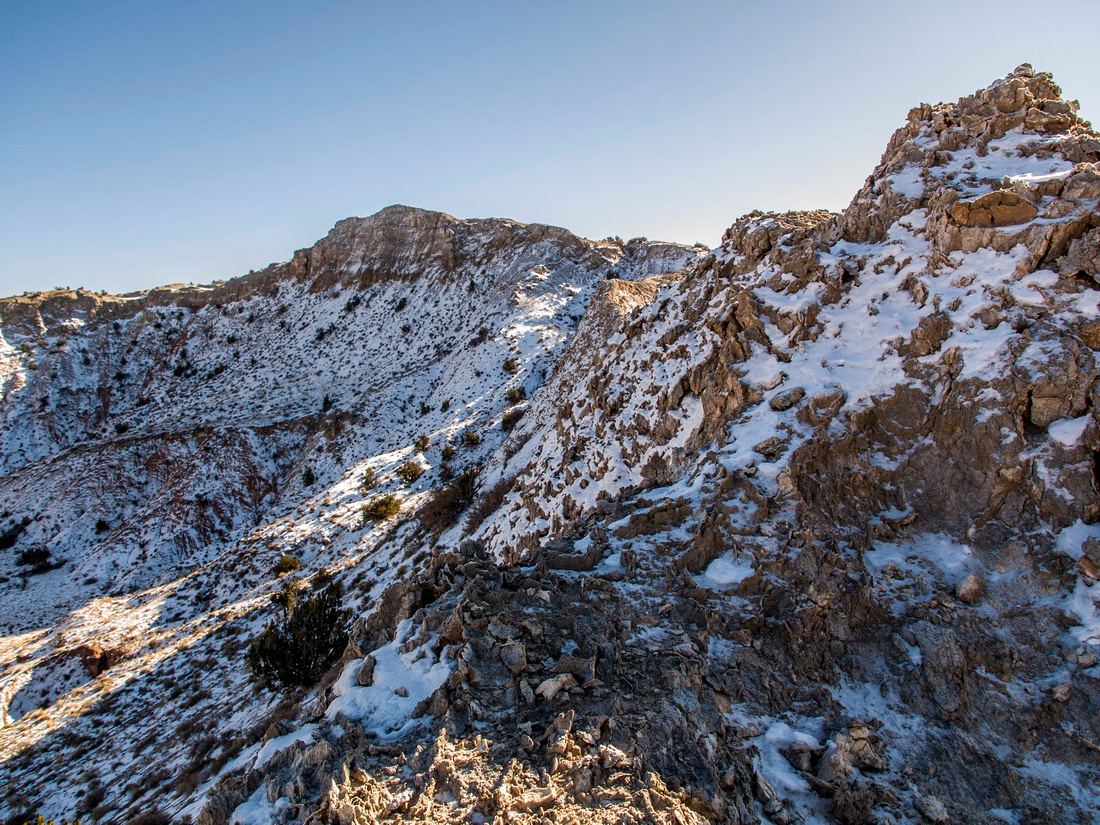 Red, orange and yellow rocks and soil with the Jemez Mountains in the background. 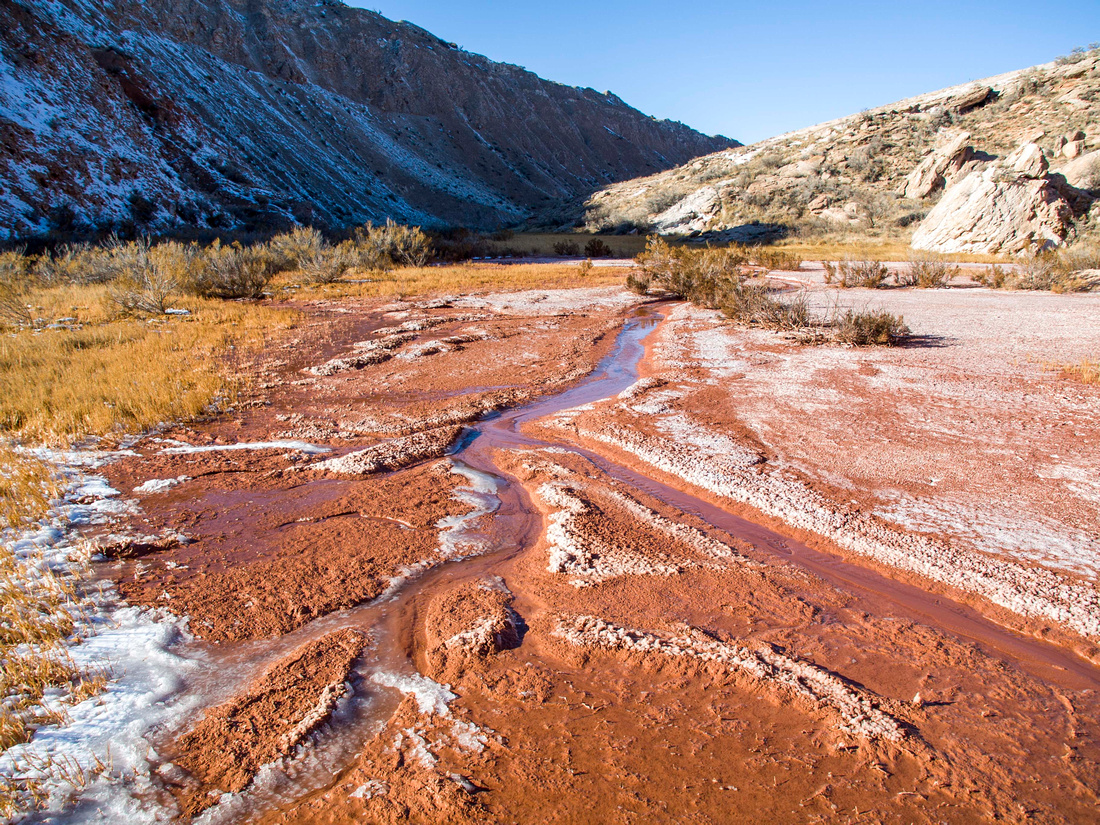 Red soil with run off from a sulfur spring. The water is warm at its origin and eventually freezes. The temperatures were well below freezing when these photos were taken. We sank up to our knees stepping in places we thought were frozen, only to discover there was a thin layer of ice over a warm, soft, goopy mud. 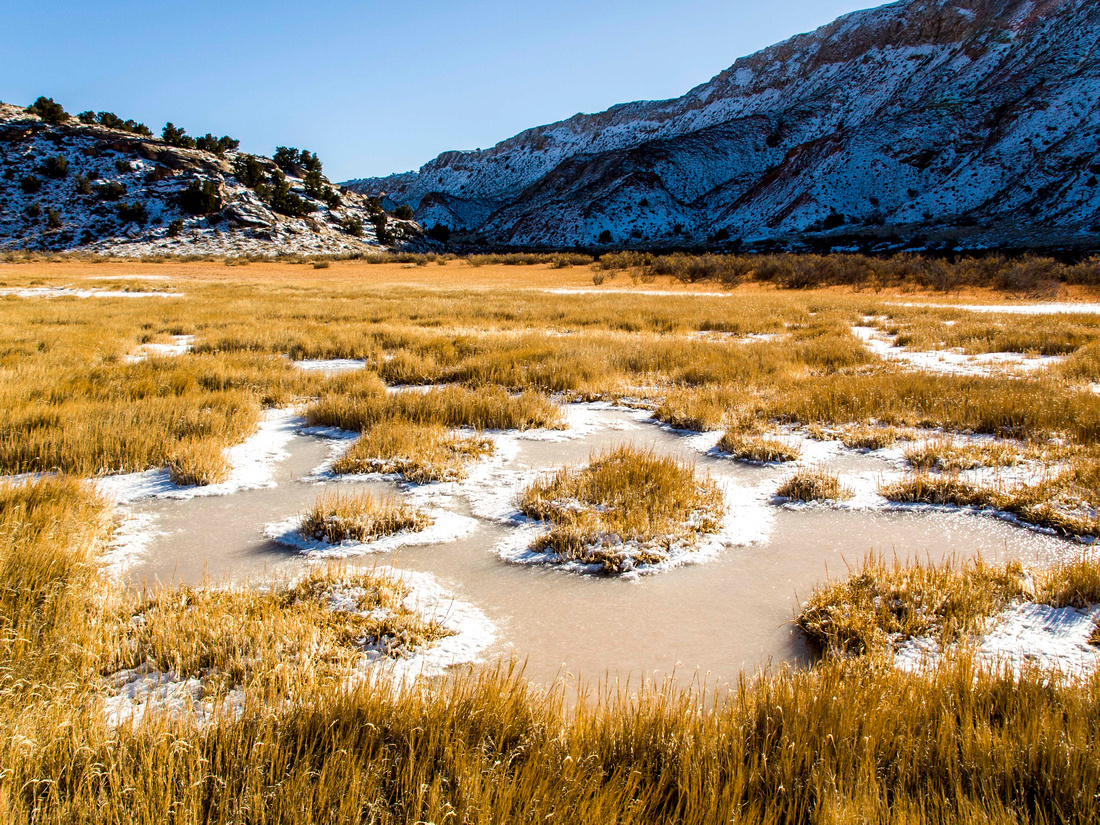 Slushy ponds trying to freeze over the warm water. 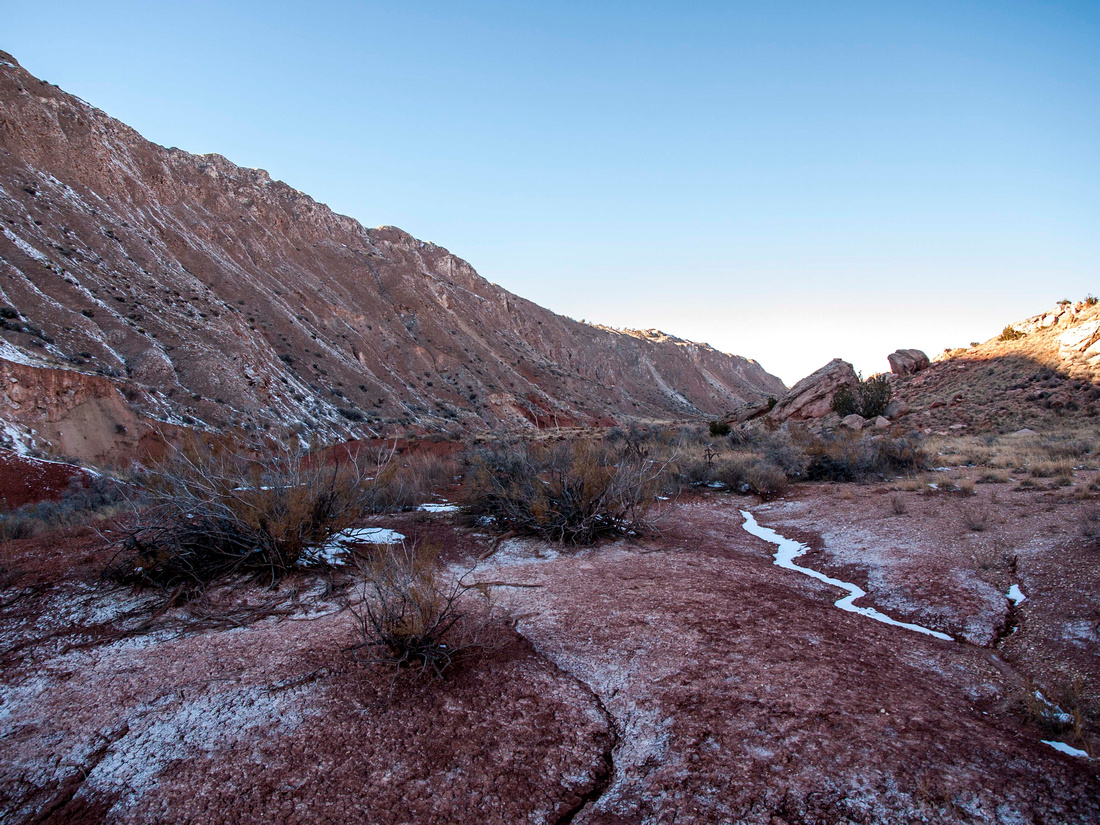 Red soils and a stream that finally succumbed to the sub-freezing temperatures in the shade of the valley walls. The craggy dome in the middle ground is hollow inside, The rock is less than a foot thick in many places. You can see the gypsum cliffs in the background. One of the many sink holes found in the rock. 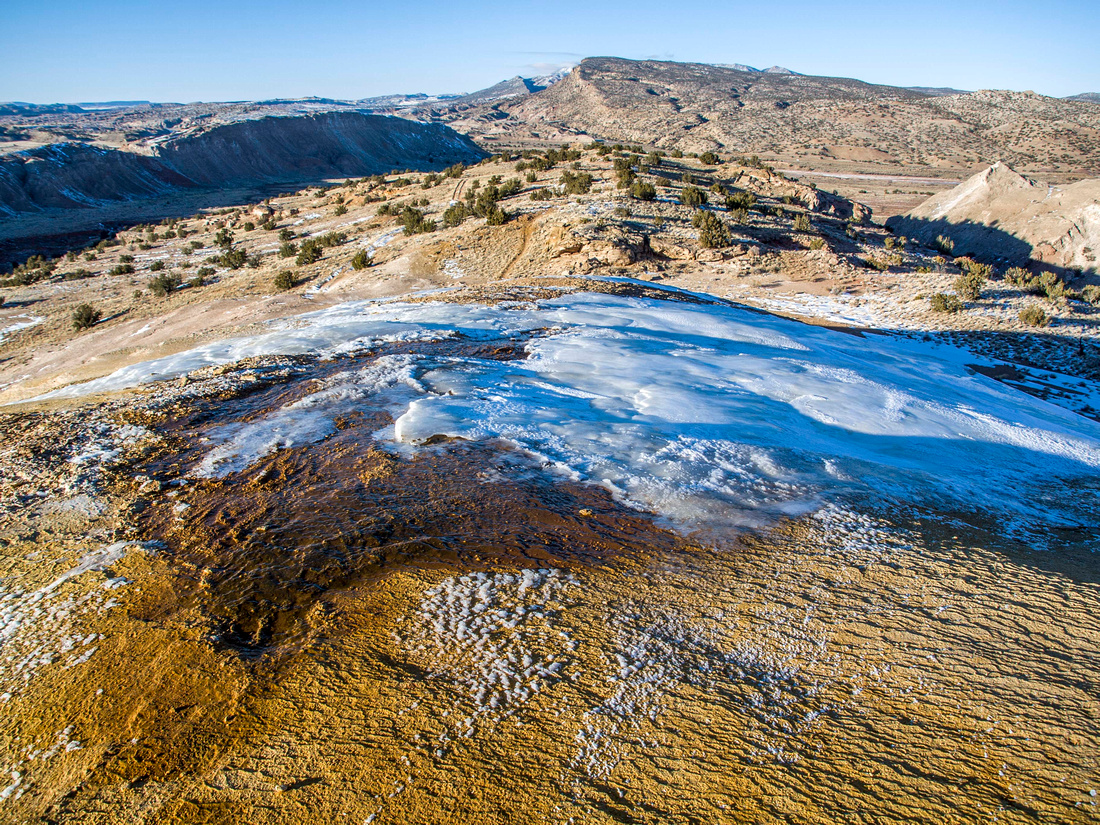 The rock is yellowed where a sulphur spring bubbles up and seeps out onto the surface of the rock. One of the many long and sinuous cracks in the rock domes. A wider view of the washboards and natural rock walls from a higher vantage point. Looking southeast at the Sandias just before sunset. 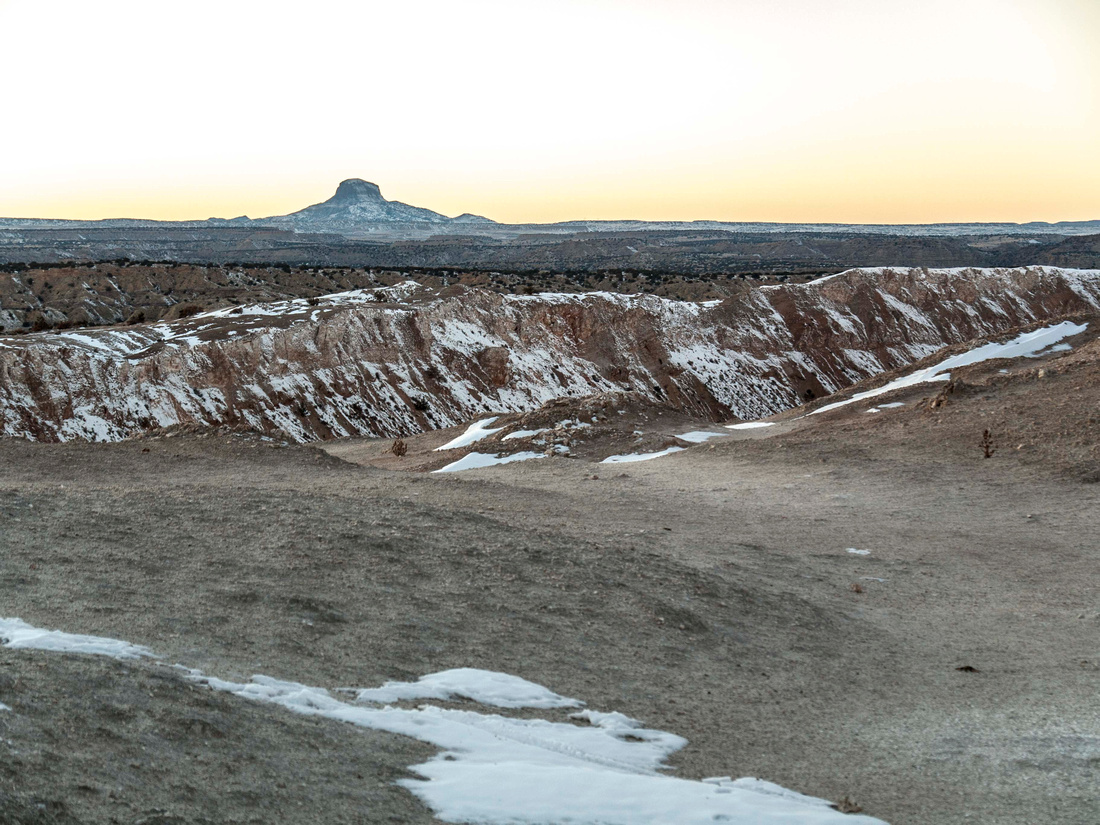 T & L Photos
Thanks, Leyla!
Leyla(non-registered)
awesome pictures <3
T & L Photos
Hi Lavinia! Sink holes are not common, but with the type of geology in the while mesa area they are.
Lavinia Ross(non-registered)
Beautiful country! I never thought of that area as having sinkholes. Great series of photos.
T & L Photos
Thanks, Teagan. The rock domes won't break under the weight of a human, but you could fall in a sinkhole or off a steep ledge.
No comments posted.
Loading...
Subscribe
RSS
Recent Posts
Last Post on Zenfolio Walk, Run, Splash, Fly A Walk in the Snow We Wish You a Merry Catmas Cranes, Train & A Full Moon on Winter Solstice I Had A Dream Shrink Wrapped Fly Away Fire & Phantasm First Snow on the 2nd
Archive
January February March April May June July August September October November December
Timothy Price
Powered by ZENFOLIO User Agreement
Cancel
Continue